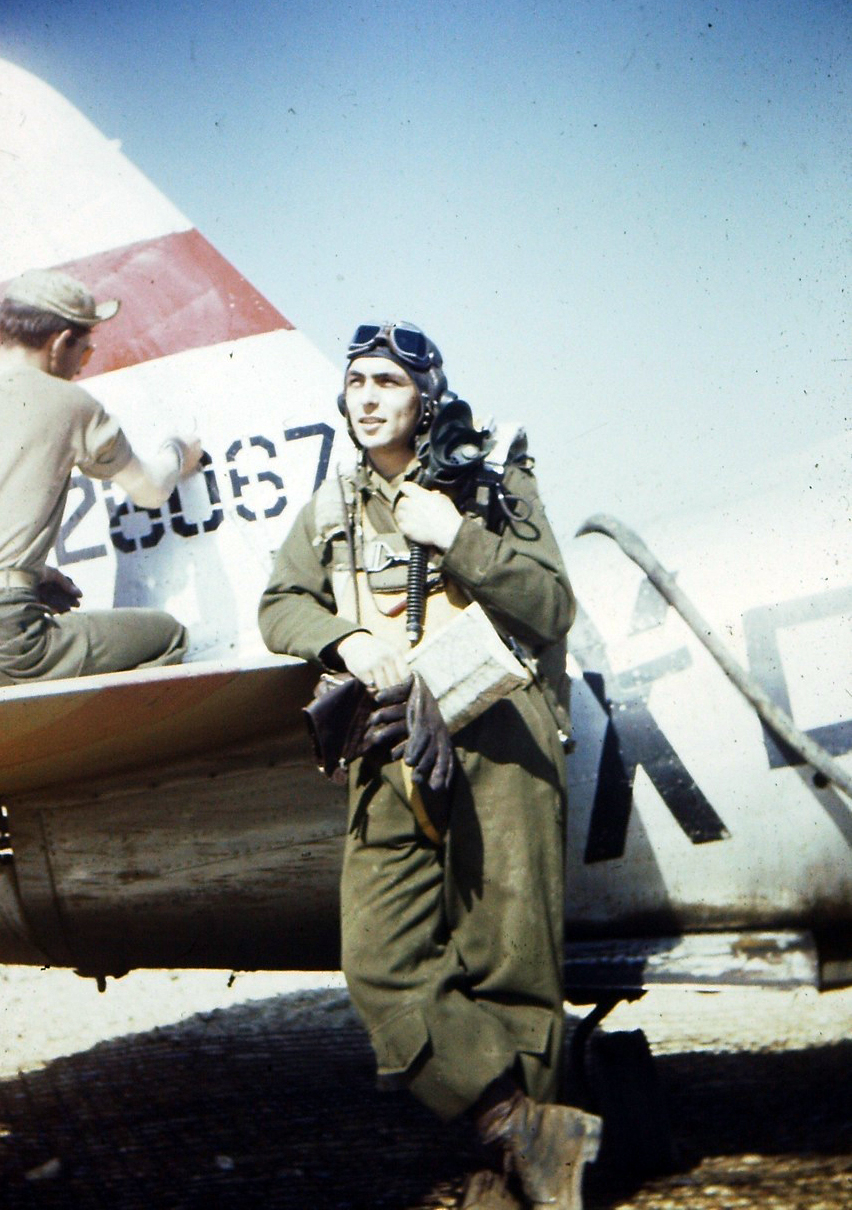 Philip Savides standing on the tail wing of W-3X, 42-26067 which was probably Richard H. Perley's Thunderbolt. According to the P-47D-22-RE serials, It was one of the last Razorback Thunderbolts in 50th FG 313th FS service. (Greeksinforeigncockpits via Mark Savides)

Philip Savides was born in Hillsboro, North Dakota on October 2, 1920. He was the fourth of five children of a Greek Rev. Youvan Savides and Ethel Nelson Savides. His father was born in Gurumze, Adana, Turkey and his family left for Thessaloniki, Greece, after the defeat of the Greek Army and the expel of Greeks from Asia Minor. They immigrated to the United States in 1910 and moved to Racine, Wisconsin. While a student at Carroll College in Waukesha, Wisconsin he fell in love with flying and obtained his private pilot’s license through the Civilian Pilot Training Program. World War II interrupted his collegiate career when Phil joined the Army Air Corps in 1942. He became a P-47 Thunderbolt pilot in the 50th Fighter Group’s 313th Fighter Squadron in the Ninth Air Force. Phil flew 101 missions from 1944 -1945 out of England, France and Germany. His P-47 was named the ‘Juicy Lucy’. He wrote about it:

"Juicy Lucy was a hand me down P-47 which I received without question just as the poor kid puts on the jacket of his older brother. No one told me who was the previous pilot nor did I ever ask about him. The plane outlasted the war, I believe, but I left Europe without saying goodbye to her. In my recollections, we (or at least I) often flew different planes. It seems to me that even after I was assigned I frequently flew other aircraft, although she was ready for flight. What that should be, I can't explain. Maybe, because I was easy going an didn't demand or reject certain aircraft, Lucy was assigned to another pilot on some flights, while I found myself in the one which he, for some whim, found unacceptable. In spite of what might appear to be a disinterest in a particular P-47, I developed an enduring affection for the breed. Sure, there was that obvious obesity coupled with a drinking problem and the undeniable fact that she glided like a flat iron and looked - head on - like a flying toilet seat. Yet, I'm grateful for the chance I had to pilot the Thunderbolt. It was a mighty fine, mighty machine."

Among the honors he received were the Distinguished Flying Cross, the Air Medal (with 16 oak leaf clusters) and a Presidential Unit Citation. He was also credited with shooting down a Luftwaffe Me-109 on August 4, 1944. Following his discharge from the Army in November of 1945, Phil returned to Carroll College and finished his degree. He spent most of his post-collegiate life in Oshkosh, Wisconsin as a Field Representative for the Social Security Administration. Phil and his wife, Elizabeth raised their two children, Mark and Linda, in Oshkosh. When the Experimental Aircraft Association (EAA) moved their annual convention to Oshkosh in 1970, it helped reconnect Phil with his love of aviation. Phil became an EAA member and attended the annual convention each year. After their children had grown and left home, Phil and Liz looked forward each year to welcoming EAA convention visitors from around the world to their home for the weeklong convention. Phil was honored to be a part of a panel of World War II fighter pilots that discussed some of their war experiences during the 2006 EAA Air Venture. He passed away, 86, on April 10, 2007, in Oshkosh.

When Phil Savides came to France, he was assigned the P-47D-26-RA, 42-28229, named 'Juicy Lucy' by a previous pilot. The Thunderbolt was unpainted in order to gain few more knots of speed, except for the red identification markings of the 50th FG and the anti glare surface in front of the cockpit. Savides flew ‘Juicy Lucy’ on most of his missions but he had no problem flying any P-47 that was available. Many pilots thought that it was bad luck for another pilot to fly their airplane. The biggest worry came from the plane’s crew chief, as USAAF states that the fighter is loaned to the pilot by the mechanics in order to fulfil a mission, whether operationally or in training.(Copyright Gaetan Marie)