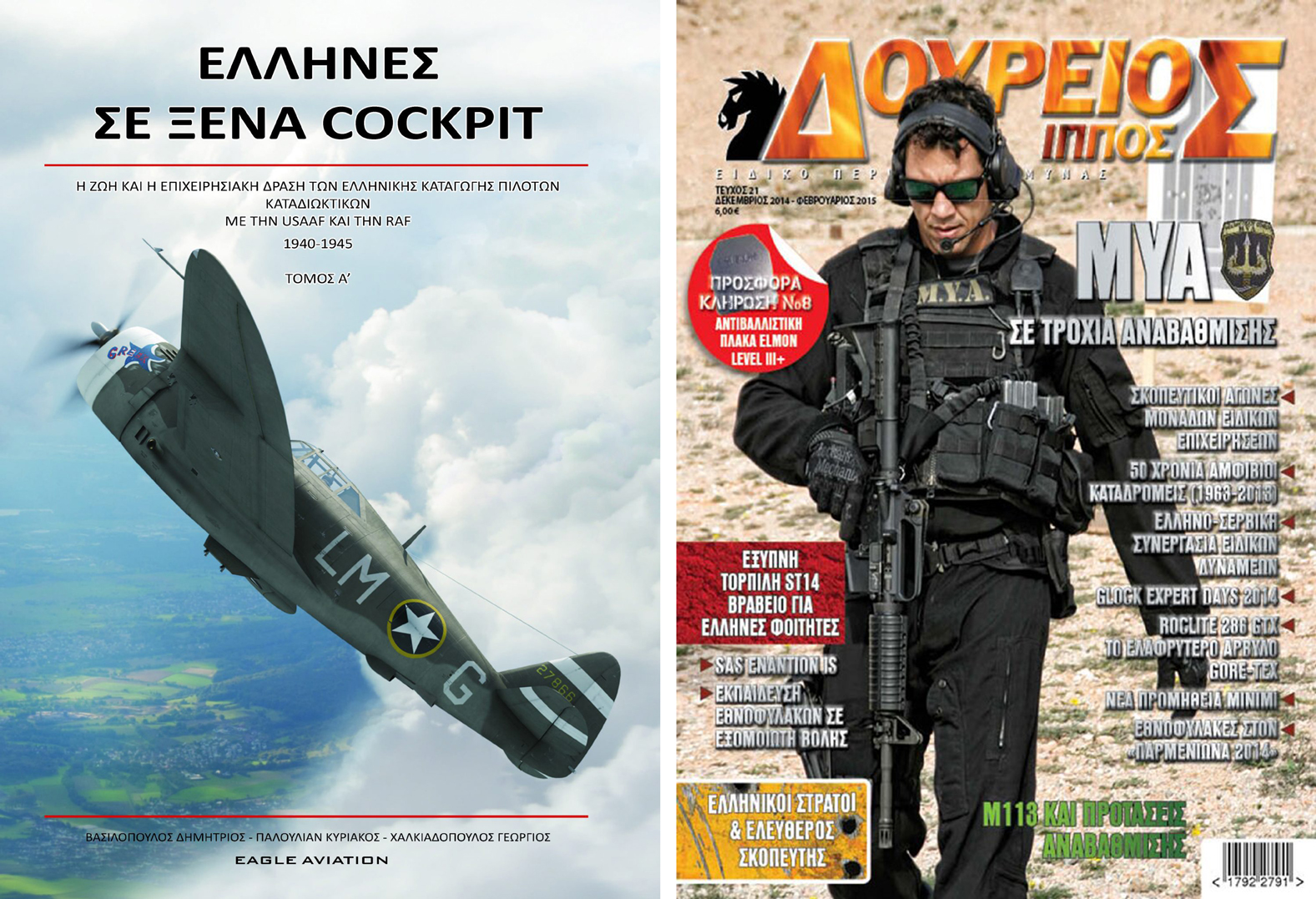 This book, or to be more accurate, Volume A, is a case study, concerning the lives and actions of Hellenic heritage fighter pilots, who flew with the United States Army Air Force during WW2. No one ever thought to research such an interesting and touching subject, not even from the Greek American community in the United States. The authors are natives of Greece, meaning that all their research made using the internet in order to reach their sources. The book covers not only the pilot's war stories but refers also to the history of their family, presenting us the difficulties they had to overcome in order to succeed in their new country. The most touching feature of the book is the first-hand accounts of the veterans themselves or their relatives, referring to their love for aviation and how these men enlist in order to fight for freedom in the skies. This unique study from the authors is supporting by a team of talented artists who created profiles and digital painting covering the actions of the Greek parentage aviators, who flew, fought and some of them died during WW2. The photographs are more than someone could imagine and the bilingual captions is a welcome bonus for the English speaking readers. We believe that soon we will be able to read their next Volume. 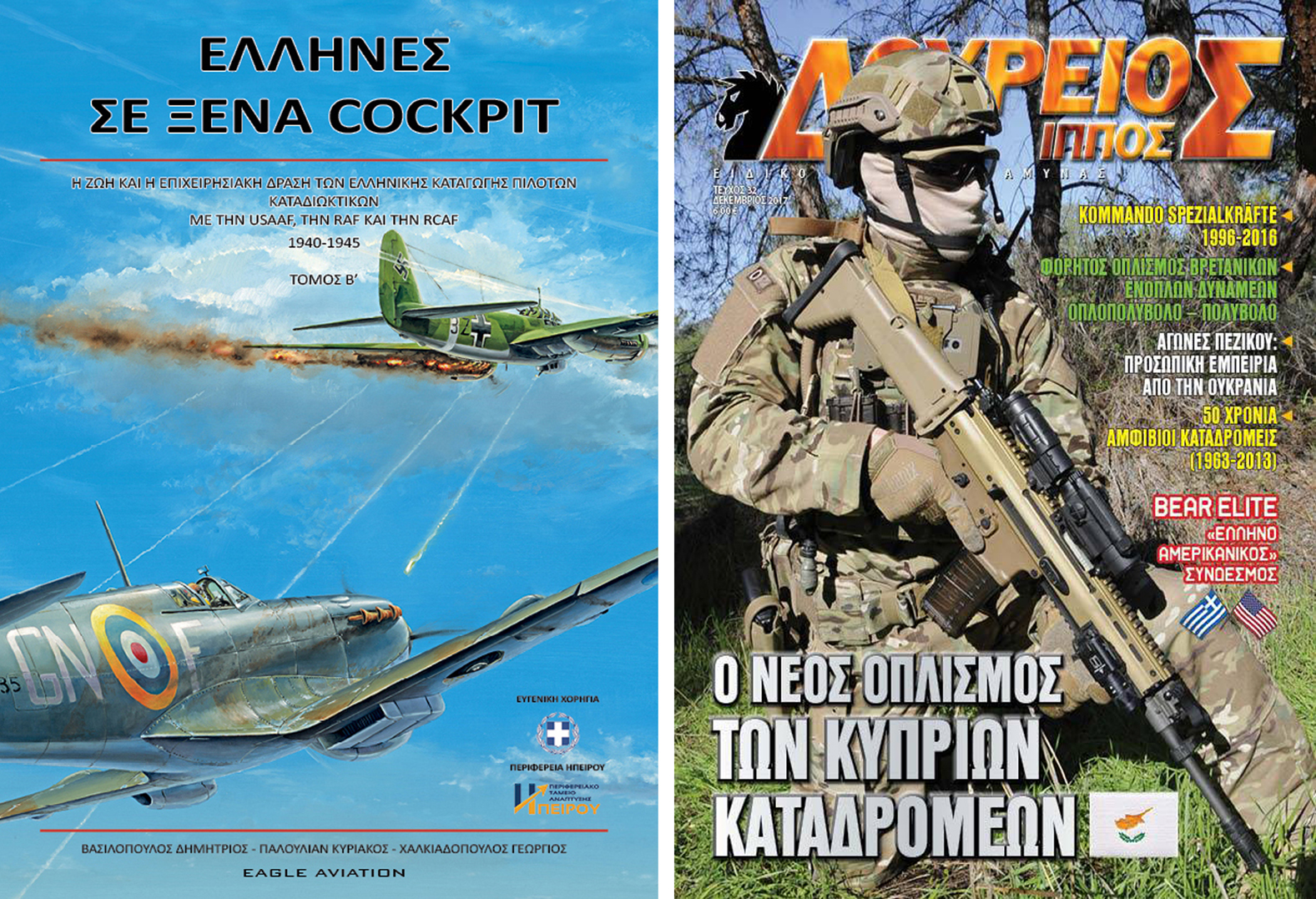 Three years ago, this group of authors presented a volume that was hard to imagine that it could ever be. Judging from the circumstances it was hard to expect that there would be a follow up volume. And yet! The writers did it and presented a similarly striking volume, which is the normal if one takes into account the many years of passionate research every member of this group have on the subject. Being enthusiastic researchers, the result is a project that could well be undertaken by an official agency. This is not a form of speech, as the authors placed religiously and historically accurately one-by-one the traces of the personal story of each aviator. Family history, personal manhood and their path to aviation, their career in the various squadron they served, and the dogfights and battles they fought are listed in full detail, cross checking even the records of the rivals they confront with. Photographic coverage is excellent. Their actions are not just recorded but emplaced in the operational status of each war period they flew, making it easier for the reader to adapt, to the different war theaters in which the Greek aviators of the diaspora fought, from Great Britain and the Mediterranean to the Far East. Reading this Volume we can say that we have a perfectly balanced story for each pilot which starts with his early years and continues to their wartime career within the various units they served. The project is supported by talented artists who draw the profiles of the aircraft the Greek parentage pilots flew, as well as beautiful oil and digital paintings which were created to represent specific aerial fights from their careers. Research on the subject has gone so deep that writers are already preparing a third volume, which will also cover bomber pilots! The series is expected to be completed with several volumes, presenting in the end an impressive reference work, an example that should be imitated by official Greek services and academies. Concluding the ultimate cause for the writers is to preserve this unknown aviation history subject and presented to their fellow countrymen being a bright example for all the Greeks who are moved by the aviation ideas. 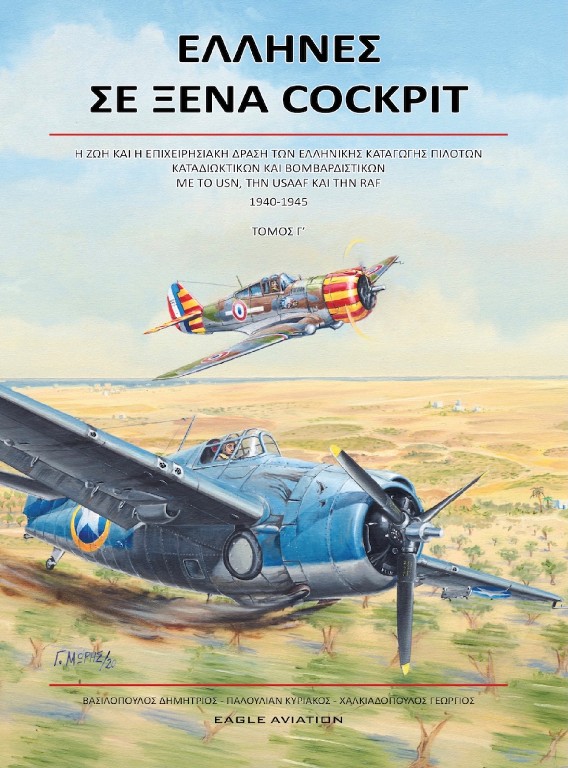 The writers led by Dimitrios Vassilopoulos, who started this publishing effort seven years ago, have managed to reveal a unique "pantheon" of heroes of the Greek Diaspora who fought in World War II. Greek heritage pilots flew to all Operational Theaters with the allied air forces and in the third volume of the series, "GREEKS IN FOREIGN COCKPITS" they reveal those men who flew from the US Navy carriers. The new element in this phase of the research is that it presents the portraits also the careers of the dive bomber and heavy bomber pilots except for the fighter pilots. The depth of the research is really impressive, which highlights the unique character of this work. This is something you realize when you get to the point where the writers contacted a Japanese researcher in order to reveal who was the Japanese aviator who flew the Zeke which was confronted by Sabe Legatos with his Hellcat during his fatal mission. Touching details from their family stories in which these young people grew up, their careers, their successes, and their failures, are followed by a rapid change in the reader's mind as he reads one page after another.

However, the authors themselves will certainly feel several times a great emotional burden during their research while communicating with relatives or descendants of veterans. When confronted with people eager to share memories of their loved ones, especially the fallen, they realized the magnitude of the blow and the cessation of time in the lives of those who lived through the hardships of the bad news someone bring to them. People who, given the general social conditions of the time, never turned their back to their misfortune, but, fortunately, preserved with sacred love what was left of the fallen, to share it now after so many decades with the authors, a material that uniquely enriched the current volume of this amazing series. This material was combined, as always, in a masterful way by the authors, with the official archival material revealed by the research from the war diaries and reports of their Squadrons and Wings, through which the Greeks of America acted. It is therefore very interesting and impressive, the way in which air battles or attacks against ships and other targets are literally revived through the pages of the volume, while the recording of statistics in the extensive appendices, gives a good look at those pilots service and career.

From the Cypriot Panicos Theodosiou who fought in North Africa and Italy, operating together with the Greek Squadrons, the famous Jim Verinis, the first heavy bomber pilot to complete 25 missions over Europe and the co-pilot of Memphis Belle, Paul Bacalis a Japanese Navy ship-killer with radar-equipped B-24s on China front, Christos Mikronis who took part and shot down in his Wildcat during Operation Torch and US Navy almost ace, Sabe Legatos, who excelled with both Grumman fighters to the USS Yorktown reconnaissance pilot with Hellcat F6F-3P, Michael Alexatos, Frank Sarris of the Battle of Leyte Gulf, also flying with Hellcat, the Navy Cross holder Thomas Samaras, for the direct hit he achieved to the battleship Yamato flying the fearsome Helldiver and the almost ace James Sakellariades flying the mighty Corsair, who flew with Samaras from the USS Essex, the authors promise you an exciting experience of a time journey through history, nevertheless the dark side of it. A journey of acquaintance with the heroes we never learned, heroes who brought back the light of freedom in our world. The third volume is prefaced by two younger Greeks of the Diaspora, the retired Cdr. Demetries A. Grimes and Cdr. Christopher Papaioannou, commander of the famous Top Gun School. With their writings, they confirm that they also grew up having affected by Greek Mythology and History, as is the case with children of a common Greek family, an element of which they are proud. This is mentioned, in order to understand that the Greek heroes of the Diaspora who fought in World War II, children who belonged to families of the first Greek immigrants to the USA, had a much closer "contact" with their ancestral homeland. And it was something very special for them when their luck brought them to fight in Europe and especially on the fronts closest to Greece.

Perhaps at some point, it should be considered whether the Greek State should honor these Worldwide Greeks who fought in World War II with the other allied powers. Probably with the erection of a monument in their honor, similar to the monument in the Grove of the Greek Army for the Greek-American commandos who fought with the OSS in occupied Greece in the period 1944-1945. Perhaps a good opportunity would be on the 80th anniversary of the end of World War II. Until then, let us wait for the writers of the series to reveal to us many other unknown compatriots who fought, honored their family name and ancestral homeland, with some of them "taking the Death kiss in their planes", like countless other pilots.

You can read the original review (in Greek) at the following link: https://doureios.com/ellines-se-xena-cockpit-g-tomos/