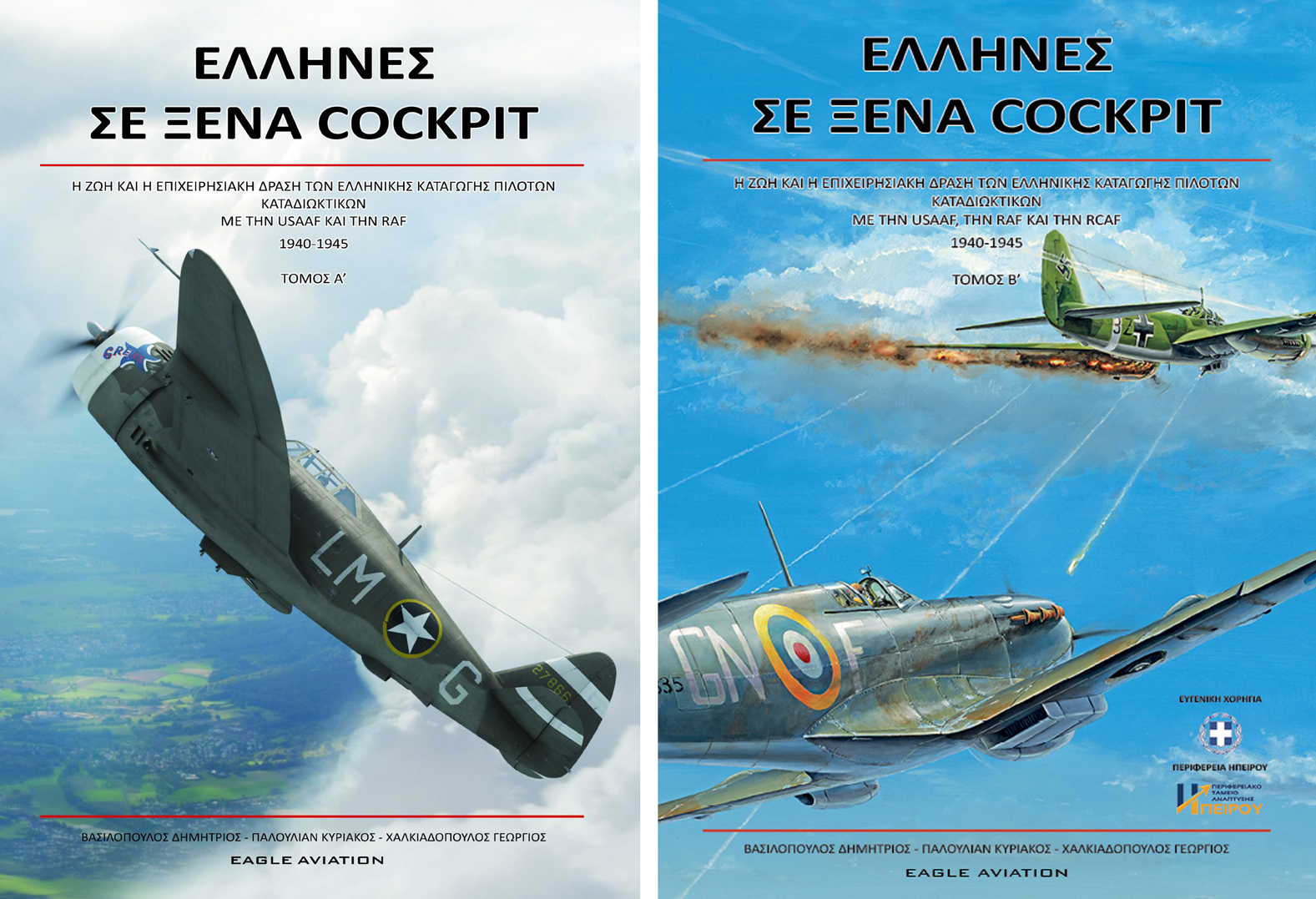 This is the first volume of an amazing collective work of editorial and artistic excellence, packed in 330 pages, in a 30 X 21,5 cm format. The first volume was released in Summer of 2014 by the three authors: Demetrios Vassilopoulos, Kyriakos Paloulian and George Chalkiadopoulos. Teamed with them were Bernard Brown (widely known as Gaetan Marie, from France) and Antonis Karydis, a Greek, also well known aviation artist, both made the splendid colour profiles and paintings/digital art depictions. One of the authors, D.Vassilopoulos undertook also the task of art direction & lay out of the book and the result is easily read and artistically perfect. The subject and the title of this publication were widely known from past articles written by Kyriakos Paloulian in aviation magazines. Readers huge response and interest made the three authors to decide about creating a book together, which was completed after extensive research - not a compilation of those articles.Ten chapters in total deal with the war biographies & operational action of the following pilots: 1. FRANK "FREE GREEK" ZAVAKOS 2. NICHOLAS D. SINTETOS 3. SPIROS "THE FLYING GREEK"- STEVE PISANOS 4. ROBERT "SMOKEY" VRILAKAS 5. ARTHUR "ELMER" SUGAS 6. HARRY "GREEK" CORONIOS 7. ATLEE "MAD PAPPY" MANTHOS 8. PHILIP SAVIDES 9. JOHN LOLOS 10.SPIROS "SPIKE" KARAVEDAS Text is accompanied by 435 images, 48 color profiles, 11 digital paintings, 4 oil paintings and explanatory tables of confirmed missions/victories-kills (complete with date, aircraft types, flight hours, etc.) for each pilot. Large explanatory captions also accompany all side views/profiles and art paintings. Some of the profiles depict enemy aircraft types. Text is in Greek and captions are bilingual (english/greek) “Greeks in Foreign cockpits” is an admirable work of collective authorship. Narration fully absorbs the reader and features interesting historical events which unfold unknown scenes of air war drama. The authors collected information -after great effort- from pilot log books, Squadron flight records, witness statements recordings and many other sources, difficult to find and access after so many decades. Photographic material revealed is important and worthwhile, for the Aviation History fan and the modeler wishing to access such rare to find photos and other details. Paper, printing & sewn binding are all of excellent quality, in a kind of book that will endure time and bring hours of absorbing reading. Fans of P-47D Thunderbolt (depicted on the front cover) should not miss this book, as most USAAF Greek descent pilots flew with the “Jug”, as of course many other flew the P-51 Mustang, P-38 Lightning, P-40 and other aircraft types. A scale modeler will find many interesting subjects for future projects! In their preface, Dimitris Vogiatzis, Historian of the Hellenic Air Force Museum and the authors, highlight the fact that the contribution of Greek aviators in USAAF Fighting Squadrons have not been officially acknowledged and honored by the Greek State and this makes this book even more commendable and worth reading. In the back cover of Volume One we read this brief note by the authors: “The Story of Hellenic Air Force during WW2 is not widely known to the public, compared to the relevant achievements of Hellenic Army and Hellenic Navy. But the stories of hundreds of Greek descent fighter pilots in USAAF & RAF service remain practically unknown, with notably rare exceptions. For the first time in greek bibliography this book features the operational actions of ten fighter pilots, who honored, not only the nation which they were born, but also the nation of their fathers and ancestors, having full conscience of their greek origin. The authors aspire that this book is just a beginning and the reason for all these pilots to be officially listed, acknowledged, honored and finally being placed where they belong, among other glorious heroes in modern Greek History. Their wish is the life of those men to inspire the next generations and particularly the currently enlisted aircrew and future pilots of Hellenic Air Force”.

In October 2017, three years after the publication of the first volume of ‘GREEKS IN FOREIGN COCKPITS’, the second volume was released. Inside its 520 pages, we read in detail about the lives and combat careers of seven more Greek-born/Greek pilots, who fought over Europe, Mediterranean and China during the Second World War. Among them is the top ranking Greek ace with sixteen victories, John Agorastos Plagis. His story, like the others, is supported by photos and testimonies not seen before in Greek and international aviation history publications. Along with the great ace from Lemnos, there are chapters featuring Richard Demetriadis (Battle of France and Britain), Harry Zavakos, James Vurgaropulos (both in combat over China), and Theodore Lambros, William Manos and George Kouris (all in action over Normandy and NW Europe).All chapters include unpublished photos from the pilots’ personal albums. Oil paintings, pencil sketches, digital paintings and color profiles of the aircraft flown by Greek descent pilots -and some of their opponents- supplement the historical research. Once again, the extensive research by the authors has not only yielded fruit, it’s exceeded their expectations. Maintaining the same format as Volume A, and having a quality upgraded cover, the much larger Volume B (190 more pages) is impressive. The captions remain bilingual and comprehensive to allow English-speaking readers to enjoy the photos and artistic depictions, as well as understanding the content of the book to a great extent. A large portion of the second volume (150 of the total of 520 pages) is devoted to the life and actions of John Agorastos Plagis, the top ranking Greek Ace, who flew 12 different fighter types, but mostly Spitfires and Mustangs (Malta & North West European Fronts). James Vulgaropoulos & Harry Zavakos, are two of the seven pilots described who saw action in the CBI (China-Burma-India) theater of operations. Harry was the brother of Frank Zavakos, another Greek pilot, whose life was covered in the first Volume of “Greeks in Foreign Cockpits”. As with the first volume, the reader will find in Vol. B many untold stories of bravery, courage, and heroism, during the fierce dogfights of WW2 in the European & the Pacific Theater of Operations. These seven Greek descent pilots are just a fraction of hundreds more Greeks who passionately and bravely joined USAAF, RAF & RCAF, in order to fight for liberty. Their contribution to the final allied victory is as worthwhile as that of the pilots and crews of Hellenic Air Force (EVA – Helliniki Vasiliki Aeroporia) fighting over Greece and MTO (Mediterranean Theater of Operations). The fact that their actions and contribution have not been officially honored by subsequent and modern Greek State is where this book gives justice and corrects a huge historical oversight or even indifference. Reading the second volume one can feel all the drama of World War Two and the passion of these pilots for flying and serving the greater cause, fighting the enemy on all Fronts and thus liberating nations suffering under German occupation, forced labor, atrocities & tortures. We owe them much more than a posthumous reminiscence, biography or award for bravery. The authors have done a superb research, collecting and analyzing countless sources for many years; contributing aviation artists have created some inspirational paintings & color profiles of the aircraft and the whole publication is a jewel among wartime aviation press, that help us understand our great debt to those unforgettable aviators.

CONCLUSION FOR A & B VOLUMES

Don’t hesitate to give yourself a present: Add both volumes to your library! It is remarkable that Volume B manages to be even better and with more surprises and revelations than volume A. We are eagerly anticipating the already promised third Volume, with even more Greek descent pilots stories of glory and a plethora of interesting subjects for aviation enthusiasts and scale aircraft modelers too! Highly recommended!  http://www.modellingnews.gr/el/νέα-μοντελισμού/greeks-foreign-cockpits-volume-one-two