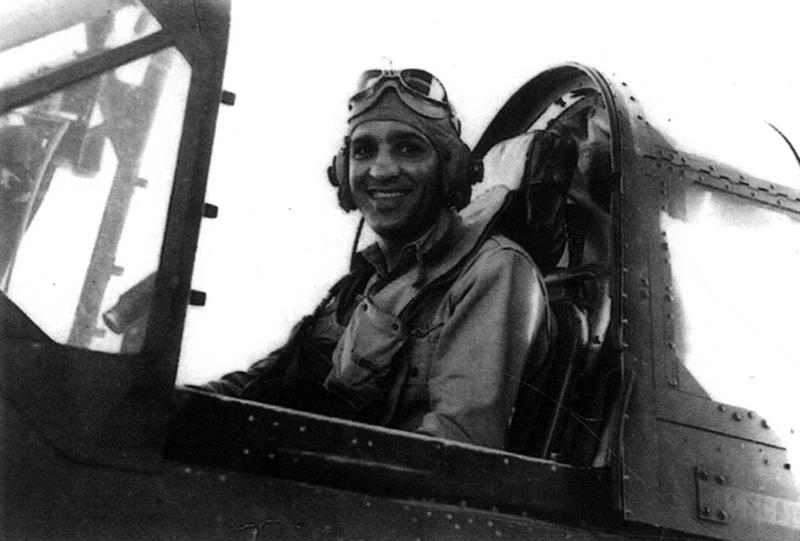 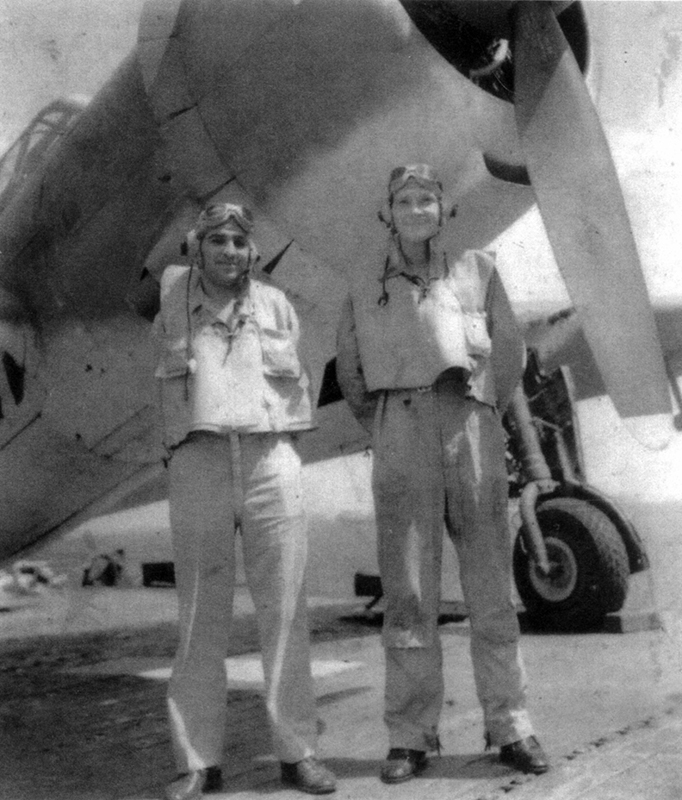 Ens. Andrew Scopelitis pose hapily inside the cockpit of his Helldiver. In the next photo, he and his gunner, ARM2c Andrew C. Dills Jr. in a typical photo having their plane on the background, on the deck of USS Bunker Hill (CV-17). Unfortunately, both men lost in an accident not caused by their actions. The U.S. Navy would not accept the SB2C until 880 modifications to the design and the changes on the production line had been made, delaying the Curtiss Helldiver's combat debut until 11 November 1943 with squadron VB-17 on Bunker Hill. The first version of the SB2C-1 was kept stateside for training, its various development problems leading to only 200 being built. The first deployment model was the SB2C-1C. The SB2C-1 could deploy slats mechanically linked with landing gear actuators, that extended from the outer third of the wing leading edge to aid lateral control at low speeds. The early prognosis of the "Beast" was unfavourable; it was strongly disliked by aircrews due to its size, weight, and reduced range compared to the SBD it replaced.(Photos USN, further info from Wikipedia)

Andrew Scopelitis was born in Norwich Connecticut on June 1, 1919. He was the son of the Greek immigrant couple Paul and Evdoxia (Hurdes) Scopelitis, and had one more brother George and two sisters, Sophia and Mabel. After school he attended The Norwich Free Academy and later worked in various jobs as a laborer. During 1938 he decided to join the US Navy to pursue a career and probably better living conditions. He was first enlisted in the US Navy on July 19, 1938. He was discharged on July 16, 1942 at NAS Pensacola, Florida and re-enlisted the following day to serve for a period of 4 years. On October 23, 1942 he was transferred to USN Pre-Flight School in Athens, GA for aviation pilot training. He completed the Pre-Flight School and ordered to present himself at NAS Dallas, Texas to continue his training in January 27, 1943. In May 23, 1943 he was transferred for further training back to NAS Pensacola in Florida. According to his file until the completion of his flight training he had flown 260.4 flight hours, of which 157.5 were solo. On September 7. 1943 he was designated Aviation Pilot and promoted from Aviation Machinist’s Mate 1st Class to Aviation Pilot 1st Class and on October 16, 1943 he was accepted appointment as Ensign USN. He was finally a USN aviator wearing proudly his Wings of Gold on his chest. His orders were to present himself at NAS Jacksonville , Florida for temporary duty involving flying under instruction in VSB type of aircraft, meaning he was destined to fly Dive-Bombers. However there was one more step until the Greek American pilot serve in the pride of USN, the Fleet Carriers. During December 14, 1943 he went to NAS Glenview, Illinois and attached to the Carrier Qualification Training Unit learning how to land on the deck of the training carriers USS Samble and USS Wolverine. He succeeded and on January 30, 1944 he was appointed to a Dive Bomber squadron for duty , specifically Bombing Squadron 8 (VB-8) at NAS Alameda. The Squadron was training in order to assume combat duties in one of the carriers fighting in the Pacific. On February 5, 1944 he left continental US probably for Hawaii and after a brief training Andrew and his squadron mates were assumed ship based status aboard USS Bunker Hill (CV-17) on March 13, 1944. While attached to VB-8 he participated in strikes against Palau, Yap, and Woleai in Caroline islands on 30-31 March and 1 April 1944. After a brief spell in which he flew many Anti-Submarine patrols around the Task Force he flew against Japanese defensive positions in Hollandia, and Wadke in New Guinea from 21 to 27 April 1944 as well as strikes against Truk in Caroline Islands from 29 to 30 April. On 8 June 1944 Ens. Andrew Scopelitis was returning from a routine Anti-Submarine Patrol flight. He was short of fuel and decided to land on USS Yorktown. While making an approach for a landing his plane, SB2C-1C BuNo 18336 suddenly spun in on the left wing off the port quarter of the carrier and sank immediately. Various witnesses stated that they saw one man in the water following on crash. A few minutes after the Helldiver sunk, two depth charges, carried by the plane exploded. His gunner ARM2c Andrew Cicero Dills Jr. with whom he flew most of his missions was picked up by a destroyer which proceeded to the scene of the crash was pronounced dead after being brought aboard. The area was searched by both planes and ships, but no signs of the pilot was found and his body never recovered. According to USN his death was not a result of his own mis-conduct. In a letter to his wife, the USS Bunker Hill Commanding Officer, Captain T.P. Jeter wrote:

Your husband’s keen interest in the Navy, and the excellent manner in which he carried his duties had won for him the high regard of his associates. His loyalty, courage and fine character gained from the affection of al those who had the good fortune to know him personally. Andrew is the type of young man that the Navy can ill afford to lose and he will be greatly missed by his all of us.

For his actions Andrew Scopelitis awarded an Air Medal, the Purple Heart and the Asiatic - Pacific Campaign Medal posthumously as well as the Presidential Unit Citation to the USS Bunker Hill. George Scopelitis had more luck than his brother Andrew. A U.S. Army veteran of World War II, he was honourably discharged with the rank of Captain, and was awarded numerous medals and commendations including the Legion of Merit for special operations excellence in the Middle East.

Curtiss SB2C-1C Helldiver BuNo 18336 was part of batch 18192/18598 built by Curtiss. It was assigned to VB-8 which was attached to CVG-8 on USS Bunker Hill (CV-17). Bombing Squadron 8 deployed from 30 March 1944 to June 1944 with CVG-8 on CV-17 to the Western Pacific. On 08 June 1944, it was lost off Orote peninsula in Guam while returning from an anti-submarine patrol, during an approach on USS Yorktown instead of Bunker Hill because of the low fuel state in its tanks. Both Ens. Scopelitis and his gunner ARM3c Andrew C. Dills Jr were drowned. The dive bomber wears the 3-tone camo that became standard of the mid-war period and which was still used for many aircraft right up until V-J Day. The individual number '16' is fictional and added for the purpose of completing the profile. From the available records we couldn't cross check the BuNo with an individual identification number. (Copyright Bertrand Brown)

In September 1943, at NAAS Fentress Field near Norfolk, VB-8 converted from the SBD to the SB2C-1. Time for familiarisation with the new aircraft was short, however, as at the beginning of October Air Group 8 sailed aboard the new carrier Intrepid on her shakedown cruise. Following the shakedown and a further month at Norfolk, ship and air group sailed for the Pacific via the Panama Canal. Intrepid reached Pearl Harbor on 10 January 1944 whereupon Air Group 8 went ashore to NAS Puunene, where it remained for two months of further training. Back at Pearl on 14 May, and now equipped with the SB2C-1C, VB8 boarded Bunker Hill which then sailed for Majuro to join Task Force 58. VB-8's first period in combat began with strikes on the Palaus, on 30 and 31 March, and then Woleai in the Carolines, on 1 April.Later that month the squadron supported the landings at Hollandia on the north New Guinea coast and ended the month with two days of strikes on Truk. After a month's rest at Majuro it was back to sea in early June to support the Marianas operation. The squadron's opening strikes were flown against Tinian on June 12. Saipan, Guam and Pagan were also hit that month, while on the 20th VB-8 was one of four SB2C squadrons which participated in the dusk attack on the Japanese Fleet in the Philippine Sea. July brought further strikes against Guam and then it was again the turn of the Palaus, on the 26th and 27th. Two days of strikes against the Bonins in early August brought the second period of combat to a close. VB8's third period started early in September with another two day visit to the Palaus. A fourth visit to those same islands was made on the 17th, but most of the targets hit during the month were new as, for the first time in the War, the fast carriers launched a series of strikes against enemy bases in the Philippines. At the end of September VB8 became the last squadron in the Task Force to convert to the SB2C-3 model. It took its new aircraft into action in October, first against Okinawa and then Formosa. The final strikes were flown against the Philippines on October 18th and 21st, but by then Air Group 8 was exhausted and Bunker Hill was detached from the Task Force to pick up a replacement (Air Group 4). VB8 returned eventually to the West Coast in December and reformed at Alameda on 1 January 1945. Ten days later it moved to NAAS Watsonville where it remained for four months, training on the SB2C-4. In May a further move saw it once again at NAS Puunene for two months. At the date of the Japanese surrender, 15 August, the squadron was en route for Saipan where it was based until late in September. On September 24, Air Group 8 boarded Bennington and spent a month cruising off Japan in support of the occupation. Following a visit to Tokyo Bay the ship then sailed for San Francisco. VB-8 was decommissioned at San Diego on 23 November 1945. The two photos on the right captured on the deck of USS Bunker Hill during the Marianas Campaign. (USN via https://www.worldwarphotos.info/) 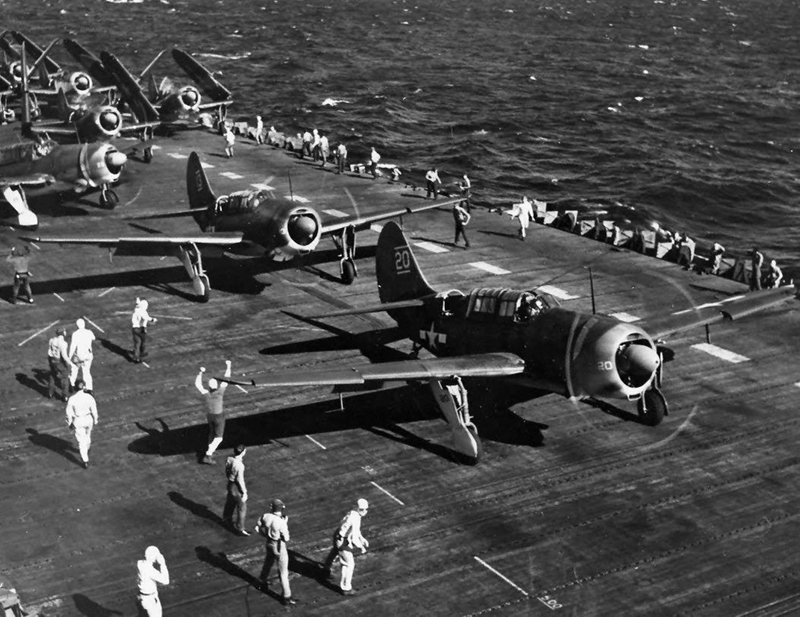 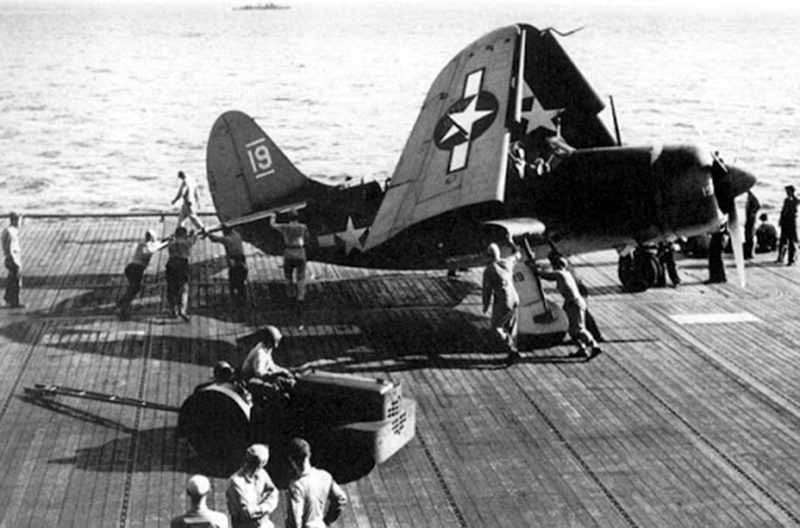 Three documents from Andrew Scopelitis Officer Military Personel Record. The first one is its enlistment paper when he joined the US Navy on July 19, 1938, in the USN recruiting Station in New Haven, Connecticut. The second is the letter which was written by the Captain of USS Bunker Hill, T.P. Jeter to his wife on June 8, 1944, referring to the loss and the character of the Greek American pilot. Finally, the third one is the telegram which was sent on July 12, 1944, to Andrews wife by the Secretary of the Navy, James Forrestal where he expressed his condolences for his loss. 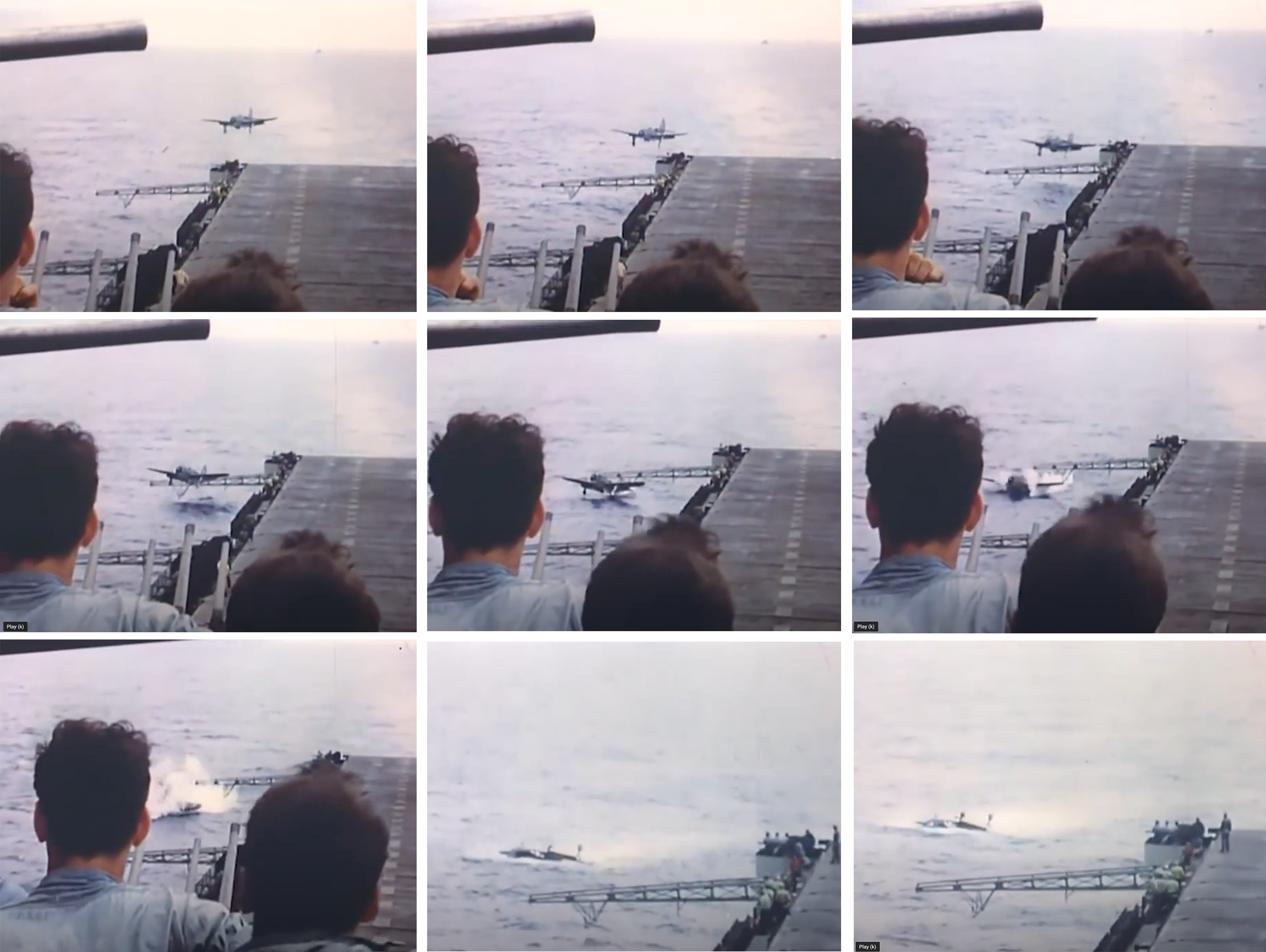 Photos of Ens. Andrew Scopelitis and his gunner Aviation Radioman 2nd Class Andrew C. Dills Jr., US Naval Reserve from their respective files. The camera stills below are from the documentary Fighting Lady (1944) in which the final moments of BuNo 18336 and her crew captured from the USS Yorktown (CV-10) in which Andrew tried to land his Helldiver. The Fighting Lady is a 1944 documentary film produced by the U.S. Navy and narrated by Lt. Robert Taylor USNR. (USN)

A Story that Should be Told - Norwich Rose of New England Chapter 110, Order of AHEPA

The Fighting Lady (1944) is a documentary/propaganda film produced by the U.S. Navy and narrated by Lt. Robert Taylor USNR. Produced and owned by 20th Century Fox. https://www.youtube.com/watch?v=zV3D24w-VXE