Lt. Antony E. Ladas was born on December 16, 1922, and he was the son of the Greek immigrant from Tenedos Island in the Aegean, Ernest A. Ladas. Ernest came to the United States in 1907. His first wife was Nellie Clough Ladas and the couple had two daughters, Helen, and Cynthia. Ernest married again with Adele Fiffick and had two more children, Anthony and Crysanthy. After his training and his promotion to 2nd Lt. Antony (O-810522), he was posted in England and served with the 9th Air Force, 363rd Fighter (Bomber) Group, 382nd Fighter (Bomber) Squadron. The Groupe escorted bombers and fighter-bombers to targets in France, Germany, and the Low Countries and strafed and dive-bombed trains, marshaling yards, bridges, vehicles, airfields, troops, gun positions, and other targets on the Continent. Later it supported the invasion of Normandy in June 1944 by escorting troop carriers and gliders and by attacking enemy positions near the front lines and moved to the Continent at the end of June to take part in the Allied drive to the German border.

"On May 28, 1944, Lt Ladas was flying #4 position in my flight. The mission was to escort heavy bombers to Frankfurt Germany. At 14:00, just west of Gardelgen, Germany, a flight of red-nosed P-47s approached us from 2 o clock level. I pulled the flight about 200ft above this formation in a slight left turn. This cleared the entire flight, but I believe that one of the Thunderbolts pulled up also, causing the crash. Lt. Ladas ship hit one wing of the P-47 and spiraled down out of my sight. In my opinion, Lt. Ladas chances of surviving this collision are nil. I continued with the remainder of my section on the course."

Years later for the purpose of the excellent book, Mission 376: Battle over the Reich, May 28, 1944, written by Ivo De Jong he recalled the incident:

"I felt at least partially responsible for his demise and have suffered pangs of conscience ever since. Ladas was flying as number four in my flight. When I saw the returning flight of P-47s dead ahead, I did a quick calculation that we were more maneuverable than the) at that altitude and determined to climb to avoid ramming. For some unknown reason, Ladas was late in responding to my maneuver and pulled up to join the flight just in time to hit the P-17 en route. I might have called my maneuver on the radio, but it did not seem necessary until it was too late. The explosion was spectacular. Major McWhorter, leading our group, called out, “What happened back there?’ I replied, “Ladas had a head-on with one of the Jugs."

Alwin Juchheim served as a fighter pilot flying P-47D in the 83rd Fighter Squadron, 78th Fighter Group, an ace with 9 kills to his credit and was awarded the Distinguished Service Cross and six DFCs! His squadron mates reported that while descending with his parachute one Me109 tried to strafe him however his wingmen Lt’s William Mc Dermott and Fred White shot it down claiming a shared victory. According to Lawrence R. Casey: 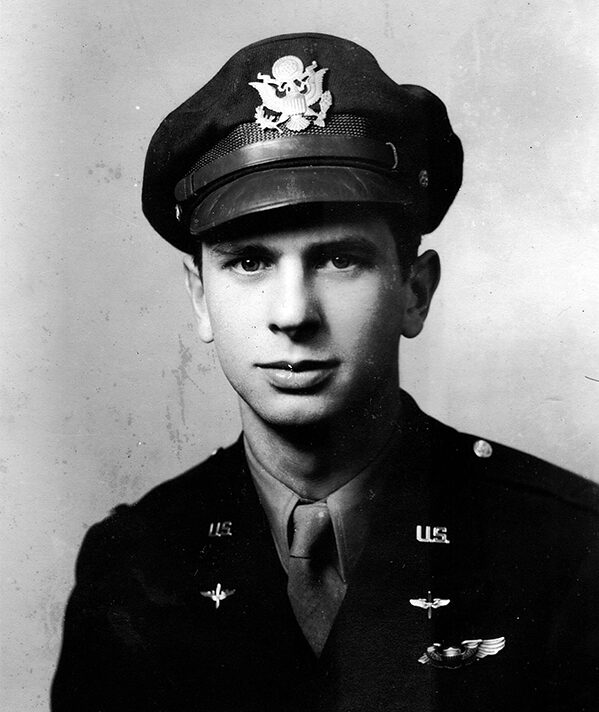 Anthony E. Ladas official Army Air Force portrait. He was only 22 years old when he was KIA over Europe (AFHRA) 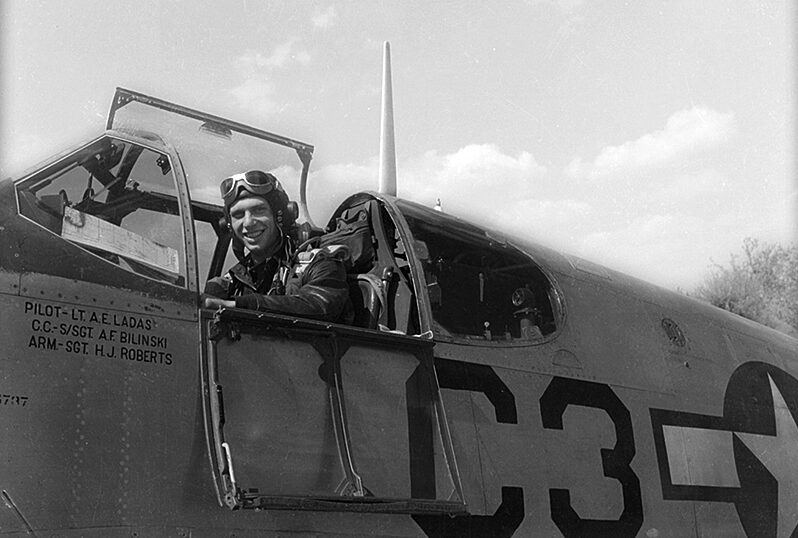 Ladas flew approximately 15-20 missions with the 382nd FS, considering that he was awarded an Air Medal and three OLC. During his service with the squadron, he was assigned a personal Mustang, specifically the one in which he was photographed in the cockpit. On the left side of the photo, the number 737 is visible on the edge. Searching the Mustang serials assigned to 382nd FS we find that there was a P-51B-10, #42-106737, C3- which is probably his fighter. After his death, it was assigned to Lt. Proctor. (AFHRA)

"I was flying White 2 on Cpt. Juchheim wing when the mid air collision between him and a P-51 occurred at 22.000 ft. The four P-51s were seen coming dead on for us but all believed a wide margin of safety was positive. At the last moment Capt. Juchheim pulled up into a left turn but then it was too late. The P-51 crashed into him and sheared the left wing from the 47. The 51 was a fiery mass of wreckage. One chute was observed and all three of us, second third and fourth man believe it belonged to Juchheim. Number three man remarked that immediately after the collision the 47s canopy was closed and the plane itself was in good condition with the exception of the left wing. Number four man reported that a few minutes later he observed the plane minus the canopy. We followed the chute down to about 12000 ft each striving to get close enough to recognize the person. This was practically impossible but still the man in the chute highly resembled Juchheim, his clothes, build, etc. At the above altitude we broke off observation and attacked a Me109."

After the war, in 1949, the American Graves Registration Service was able to find his grave and identify him, so as his remains to be buried to American Ardennes Cemetery. Anthony E. Ladas was awarded the Air Medal with three Oak Leaf Clusters and the Purple Heart. 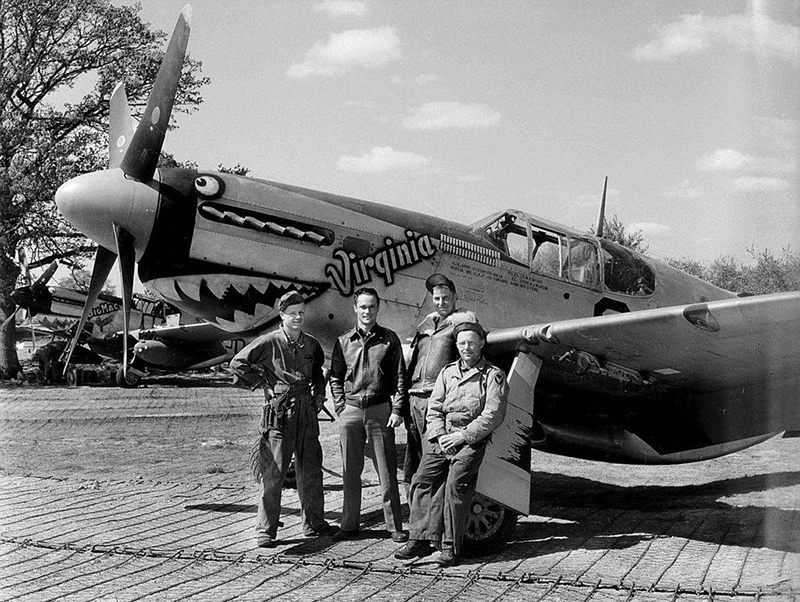 P-51B Virginia (#42-106486) 1LT Bob McGee and crew of the 363rd FG. Virginia was the name of McGee's wife. The couple married in Longview, Texas before Bob deployed to England. (Jack Cook Collection, further info by Robert M McGee, grandson of Bob and Virginia)

This was the P-51B in which Anthony E. Ladas was killed in action during his air crash with the Thunderbolt of 78th FG, Alwin Juchheim, om May 28, 1944. The Mustang remains one of the most beautiful and iconic aircraft of the Second World War and one of the most celebrated canvasses for nose art. This P-51B Virginia (sn 42-106486) of the 382nd Fighter Squadron is likely named for its pilot’s girlfriend or maybe his birthplace, but the real showstopper is this happy, googly-eyed shark mouthed face. It was originally assigned to Robert McGee, who had one kill to his credit. The shape of the Mustang’s nose, like the P-40, offers a natural face to dress in the shark motif. There was also a second 382nd shark mouth Mustang called 'Big Mac' which can be seen on the background. (Copyright Gaetan Marie) 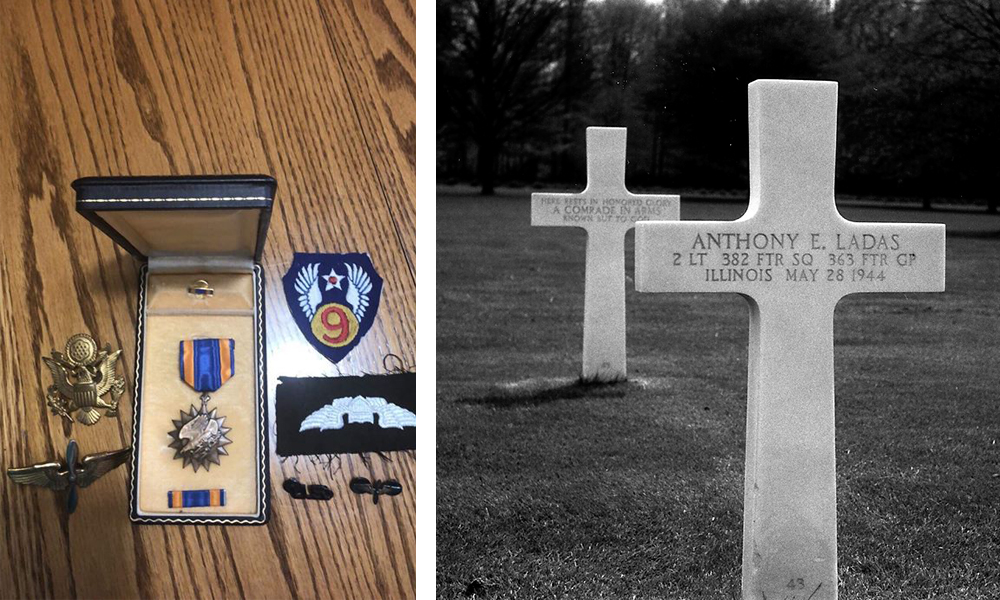