Athanasios Sougas was born in Trikala on December 27, 1919, in Trikala Greece, and emigrated to America at a relatively old age, like Spiros Pisanos. On August 23, 1928, he left for the USA from the port of Piraeus, along with his father Constantine, his mother Maria, and her 10-year-old sister Stella and crossed the Atlantic. After a long journey of about two weeks, they finally arrived in New York on 9 September 1928 with the SS Edison. The family settled in Kalamazoo, Michigan where Constantine lived, because he had emigrated 8 years earlier in order to work and be able to get his family also. Athanasios changed his name to Arthur and he was a very talented person who was passionate about aviation. After high school, he went to Western Michigan College where he entered the CPTP (Civilian Pilot Training Program). When the war broke out he enlisted in the USAAF and trained as a fighter pilot. He gained his wing and was promoted to 2nd Lt (O-660213). Like Harry Coronios he was also posted to the 56th Fighter Group in Bradley field although he was attached to the 63rd FS. When the Group transferred overseas he flew missions over Europe, providing cover for the 8th AF heavy bombers. Arthur, ever the musician and a fan of the big hand music of the day, named his Thunderbolt, a P-47C-5RE, 41-6372, UN-S, ELMER'S TUNE, after a popular Glenn Miller number. This is probably how he got the nickname 'Elmer.' He wrote to his sister that he "loved his plane as if it were a part of him". Arthur lost in the final mission of his tour of duty. Although he could fly a milk-run he choose to fly in the August 17, 1943 missions where the 8th Air Force attacked the ball-bearing factories at Schweinfurt and the Messerschmitt factories at Regensburg. Things went badly for the Americans who suffered heavy losses from the Luftwaffe fighters. 60 out of 376 bombers, 3 P-47s, and 2 Spitfires were lost, mostly due to the Luftwaffe which threw into a battle about everything she had, losing about 30 fighters herself. Arthur Sugas P-47 was possibly hit above Rullan in Voeren, by the German experten Hauptmann Johannes Naumann (he survived the war with 34 kills in the western front), of 6./JG 26. His aircraft came circling down, nearly missed the church tower, and crashed into a field. Some say that he wanted to spare the church and village, according to others he was already deceased at that stage. He passed away at the age of 23 and was buried the next day at the General Cemetery at the Tongerseweg. After the liberation, his remains were transferred to the American Cemetery at Margraten. In 1949 his parents had him reburied at Riverside Cemetery, in the city where he lived, Kalamazoo, in the state of Michigan. 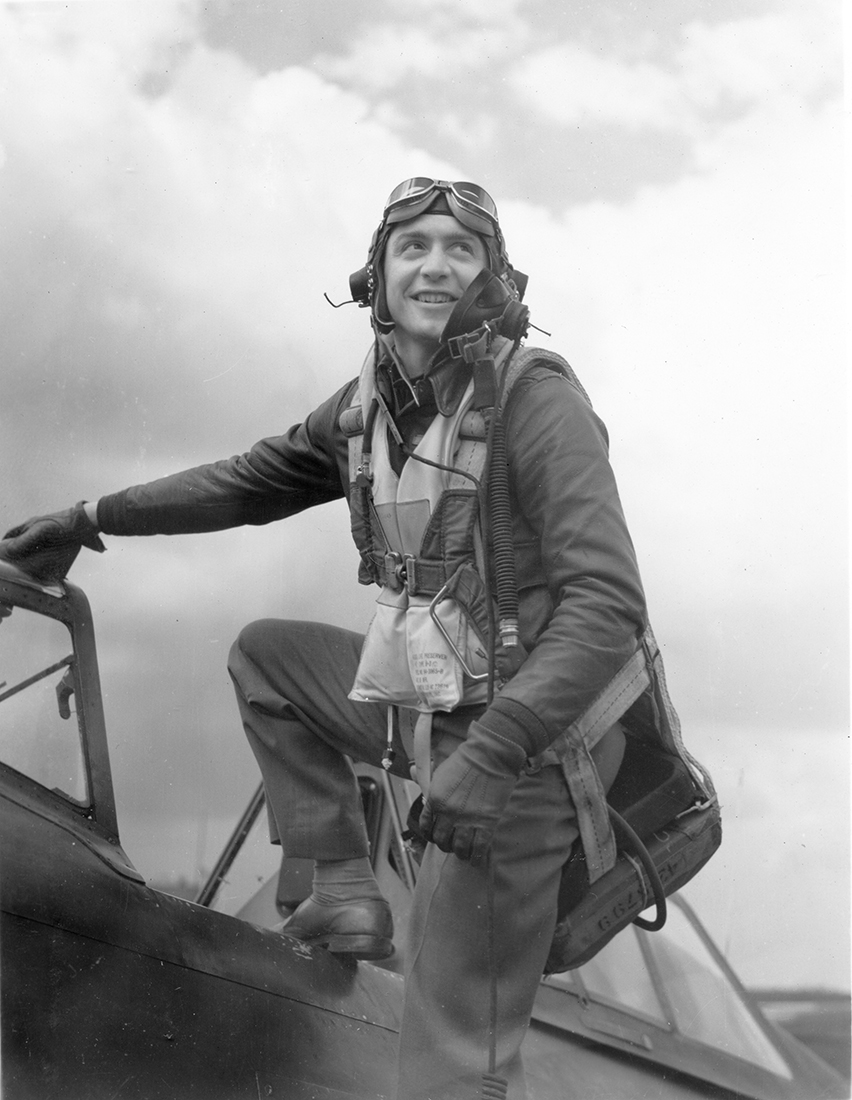 Lt. Arthur Sugas entering the cockpit of his Thunderbolt before another mission over occupied Europe with the 63rd FS, 56th FG. Arthur was a first-generation Greek American, like Spiros Pisanos, emigrating from Greece when he was 8 years old! (Greeksinforeigncockpits via www.56thfightegroup.com)

The Greek American pilot Arthur Sugas was killed by JG 26 Experten Johannes Naumann on the 17th of August, 1943 while flying his P-47C-5-RE (serial 41-6372, coded UN-S) named as 'ELMER'S TUNE'  during his last mission before his return to the United States. Unfortunately, there are no photos of 41-6372 and the nose art was created based on how other 56th FG Thunderbolts had theirs. There is a testimony of Aristos Spougios, another Greek American of Kalamazoo and friend of the Sugas family who remembers a 63rd FS pilot visiting Arthur’s house after the war. According to Spougios, he confessed to his parents that he felt guilty for Arthur’s loss because that day Arthur was flying his plane, as his own plane was undergoing repairs in the hangar. However, according to the researcher of 8th AF, Peter Randall (http://www.littlefriends.co.uk/) who did find all the missions and planes flown by Arthur, the Greek American pilot indeed flew his own plane that fateful day (Copyright Gaetan Marie)