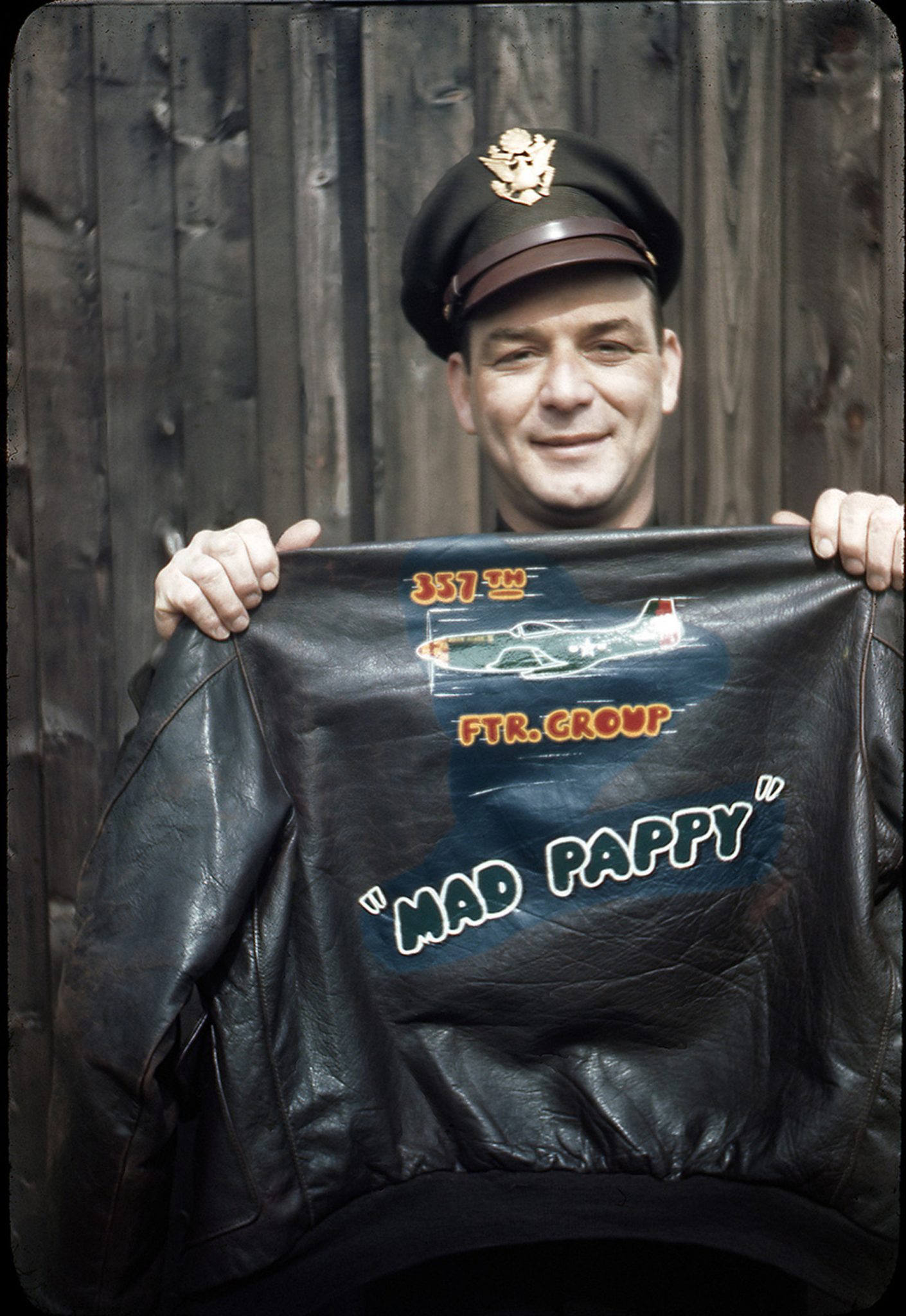 Atlee Manthos proudly showing his flight jacket in a superb original color photograph. The jacket reads 'Mad Pappy', Atlee's nickname. The photo was taken while Manthos returned from his service in the 8th AF HQs and resume combat operations with the 357th Fighter Group, but on this occasion with the 364th Fighter Squadron. (Greeksinforeigncockpits via Dan & Jeff Manthos)

Atlee was born on August 4, 1912, in San Antonio, Texas. His father, Mike Manthos came to the United States in 1905 from the beautiful mountain village of Kalavryta, nested in a valley in the north of the Peloponnese in Greece. He chose to cast his fate to the clean open spaces of Central Texas and the embrace of the daughter of Swiss and German immigrants, Laura Klein, who was raised in the German farming community of Fredericksburg among other German-speaking immigrants. Once the US entered the Second World War Atlee heard the call to arms in general and the call to the Army Air Corps in particular. As a college graduate, he was accepted as an officer and pilot and began training as a cadet at Hicks Field in Fort Worth in August of 1941. As the oldest member of his class was called 'Pappy' after Al Capp's Li'l Abner cartoon character 'Pappy Yokum'. He was 'Pappy' to everyone who knew him the rest of his life. He completed his training at Randolph Field and Kelly Field in San Antonio, and in March of 1942 he was commissioned as second lieutenant and assigned to Waco Army Air Field as a flight instructor. For the next two years, he trained new pilots in both basic and advanced flight techniques as well as aerial gunnery. In June 1944, he boarded a ship for England and the 'Mighty' Eighth Air Force to train for duty flying bomber escort and ground support missions. Atlee was assigned to the 496th Fighter Training Group in Goxhill, he trained in early models of the P-51 Mustang before posted to the legendary 357th Fighter Group at Leiston, on the coast about 100 miles northeast of London. By October 1944 however, he was attached to the 363rd Fighter Squadron where he flew 24 combat missions between October 9 and December 18, in the North American Aircraft P-51D Mustang. The latter fighter with the serial 44-13573 and code letter B6-F was named for his new wife, 'MARY ALICE'. At the end of December 1944, Pappy left the 363rd FS for Eighth Air Force Fighter Command Headquarters at High Wycombe where he remained until the end of January 1945. He returned to flying missions for the 364th Fighter Squadron this time, on March 19. He was assigned a new P-51D named as 'MARY ALICE II - MAD PAPPY' with unknown serial and code letter. He claimed three damaged enemy fighters, specifically a Fw-190, a Me-109 and a jet-powered Me-262. After the war ended, 'Pappy' accepted reassignment to the 78th Fighter Group at Duxford as Operations Officer and remained in England until the end of 1945. After his return to Texas in 1946 he completed his studies and went to work. He returned to active duty although he lost of wartime rank, he decided it was an arrangement he could live with. In July 1947 he wears first lieutenant's bars for a second time, in the new US Air Force, where he would spend the next 16 years of his life, flying P-47's, F-84's & F-86's. He passed away in and for his wartime actions he was awarded the Air Medal with three Oak Leaf Clusters.

Atlee’s Mustang P-51D-5-NA, 44-13573 was named "MARY ALICE" after his first wife. Before it was assigned to him, it was flown by the New Zealander Jack Clealand who named it "ISABEL III". Clealand was an RAF officer who was posted for temporary duty to the USAAF’s 357th FG. The kill markings under the cockpit referred to his victories while flying Spitfires with No.616 Squadron RAF. It also carried the D-Day "invasion stripes" which were retained by Manthos. The Greek American pilot flew 24 missions with B6-F from 9/10/1944 to 18/12/1944 before being posted for duty to 8th AF HQ. (Copyright Gaetan Marie)