George G. Contos was born on March 12, 1923, in Canton, Stark, Ohio. He was the son of Konstantinos (Gust) Contos and Calliope Fanouriakis from the village Archanes in Crete, Greece. Both came to Fairhope, Ohio in 1920 and Gust worked for Republic Steel Corporation and retired from there after 35 years. The couple also had two more sons and two daughters. After school George also worked as a metalworker for Republic Steel Corporation. The entry of the United States in the Second World War urged him to join the fight as many Greek Americans did. Contos was commissioned in the United States Army Air Force on December 5, 1943. He received his Primary Flying Training in Hicks Field, Texas and he was chosen for fighters. He continued his Basic Flying Training in Air Corps Basic Flying School, Enid Oklahoma, and then his Advanced Flying Training in Foster Field in Texas. He received his wings having the rank of Flight Officer with Service No. T-123691. He was sent to the European Theater of Operations as a replacement pilot and attached to the famous 352nd Fighter Group, known as "The Bluenosers". He joined the 486th Fighter Squadron on 13 June '44. George had considerable action during his 50 combat sorties, most of which were bomber escort missions and he claimed a total of 1,5 confirmed kills as well as few ground targets damaged or destroyed. Some of his most memorable missions are described below.

During the period of 7-15 August, the ‘Bluenosers’ hit ground targets in France, claiming a sizable number of German vehicles, but at the cost of four pilots. On August 10 George flew the P-51D 42-106439, PZ-L. He used 182 rounds to damage a truck and one goods wagon. According to his report:

"After strafing a train of goods cars sitting in the station in the vic of Sommesous I pulled up to about 1000ft and saw a large truck on a highway. I started down on him and saw the driver leap from the truck. I shot at the truck observing several hits. I claim one track dam (shared) and one goods car dam. I claim for my wingman two goods cars damaged and one truck dam (shared) Lt Richard l. Henderson."

Two days later he saw action against ground targets flying once more the 42-106439. Capt Donald H. Higgins led the sqn on a buzz bombing and strafing mission. They bombed Marshaling Yards at St.Quentin with poor results. They damaged several trains and a building almost collapsed with the 500lb bombs.  Higgins later reported that if they dive-bombed the target results would be better.  The squadron assembled and went looking for strafing targets in the area SW of town. They found two trains, one of which was previously damaged. The attack resulted in almost 30 cars damaged, most of them empty, others carrying coal. Then the squadron hit some truck nearby. Expending 210 rounds, the Greek American pilot shared a damaged Oil Storage Tank and two Locomotives. On November 14, 1944, he was commissioned as 2nd Lieutenant and seven days later he had an accident when he ground looped the P-51C, 42-103283. On November 27, 1944, Cpt Edwin Heller was leading his Yellow flight. While over the Hanover area they went below overcast looking for targets of opportunity. They found three trains and shot ' em up, under heavy ground fire. Heller claimed three locomotives destroyed and four goods cars the rest of the flight including George Contos who flew the P-51D 44-14696, PZ-X. 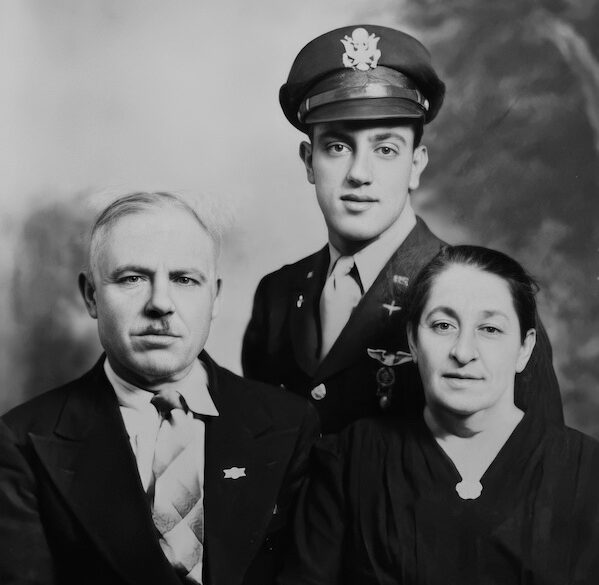 George G. Contos along with his parents, Gust (Constantinos) and Clara (Calliope) Contos. (Unknown via Ancestry.com) 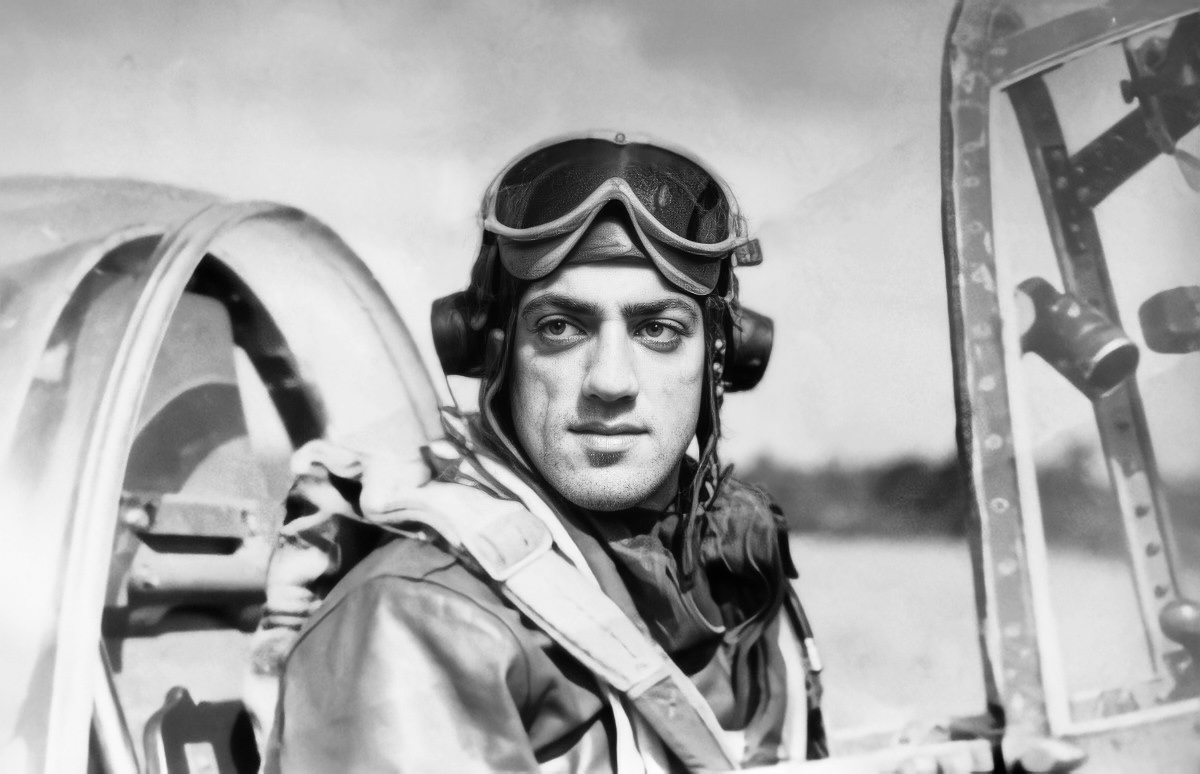 George G. Contos in an official photo inside the cockpit of a P-51D Mustang. (Bob Powel)

Assigned to 486FS, 352FG, 8AF USAAF, P-51D Mustang 44-15701, PZ-C, ‘LILLIAN’ was the personal aircraft of Lt George G. Contos. Re-assigned to Lt John D. Stearns and renamed as nicknamed ‘DELIVERY BOY’ the artwork consisted of a milk bottle behind the name. Transferred to 343FS, 55FG, 8AF USAAF, it became the personal aircraft of Major Edward B Giller renamed as ‘MILLIE G’. It was lost when the engine seized, and it was abandoned near Bruges, the pilot Frank E Birtciel baled out safely and returned to duty (RTD) on April 3, 1945. (Copyright Gaetan Marie)

On January 14, 1945, over 900 bombers from the 8th Air Force Bomber Command headed towards the oil refineries in central Germany. Waiting for the strike force were huge formations of Luftwaffe aircraft and on this date, the 8th Air Force fighter pilots would set a new record by downing 161 fighters for the loss of only 16 of their own. The battle was already about two hours old when the 352nd FG joined the action over Holland. The 486th FS encountered and engaged an unusually aggressive flight of 12 FW-190s. Eight Mustangs turned and bounced the Luftwaffe fighters. Instead of the fight breaking up in individual dogfights the German fighters stayed in formation in an ever descending Lufbery Circle. This maneuver lasted from about 9.000ft down to approximately 5.000ft when some of the FW-190s tried to escape. These attempts were made in vain, however, and within minutes, six of them had been shot down. Two of them were gunned down by Lt. William Reese (whose tally rose to four destroyed) and Lts Ernest Borstrom and Earl Mindel each claimed one, Borstrom kill earned him the Ace status. The remaining two were shared by Lts Contos, Stearns, and an unidentified 4th FG pilot. After returning back to Bodney George wrote in his report.

"I was flying Yellow four in the vicinity of Almello at approximately 1415 hrs, at 17,000 ft when Yellow leader broke into nine FW190's who were closing in on us from 5 o'clock slightly high. We turned into the FW190's and got into a lufberry where I had to break off because one 190 was firing on me. I tagged onto this FW190 but I couldn't get a good shot because he was snapping and rolling down. I got several strikes on him and he rolled over and started down when a Red-nosed P-51 (4th Gp) cut me out and blew him up. I saw another  FW190 going for the deck and a P-51 trying to get on him. I flew wing to the P51 which was piloted by Lt. Stearns, (352 Gp. 486th Sq). He followed him down to the deck where he fired several bursts and hit the E/A several times. The FW190 then broke to the left and I cut inside him pulling deflection at about 70 or 80-degree angle. I got many hits on the fuselage and wing. The pilot bailed out and the plane crashed into a house. I claim two FW190's Destroyed (shared one with a Red nose P-51, 4th Gp, and one with Lt. Stearns, 352 Gp 486th Sq)."

Lt. Stearns backed up his claim in his report.

"I was flying Yellow two, on the way home when we ran into a group of nine FW190's. I followed one down to about 5000 ft and gave him a long burst observing no strikes. I gave him another burst and hit him in the left-wing. I then overshot and pulled out to the side and Lt. Contos came in and hit him. The pilot bailed out and his chute opened. The plane crashed and exploded into a farmhouse."

After its devastating defeat on 14 January, the German fighter force again went into hiding and was not seen again by the 'Bluenosers' until the 23rd. The 486th FS was once more the center of activity, for after receiving a vector to the vicinity of the German town of Neuß, Red Flight found two Bf 109s trying to bounce a flight of dive-bombing P-47s. Lt Lumir Vitek peeled off and led his flight after the Messerschmitts, and the enemy aircraft tried to evade by flying through some sparse clouds, but without success. Finally, in a desperate attempt to get away, one of the Me-109s headed for the deck, but Lt Vitek stayed right with him. The fighter was hit repeatedly by Vitek’s gunfire and seriously damaged, before Lt Contos, who flew the P-51D 44-15701, PZ-C zoomed in and added the finishing touch just as the pilot jumped.

"I was flying Red three in the vicinity southwest of Dusseldorf. While flying south at 10.000 ft about 1000 hours, my flight leader called in two bogies popping in and out of clouds. We started for them and they pulled up in the clouds when I lost them. I then saw one of them come out of the clouds going straight down. My flight leader and his wingman started after them. I waited for the second one but he did not appear. I then followed my flight leader after the one going down. He leveled off on the deck and I saw my leader pull up behind him and then go by the E/A. I chopped the throttle and swung in behind where I fired a short burst and didn't see any strikes. The E/A pulled up a little. I drove up to his tail and fired a burst, observing strikes all over the fuselage. I broke off in a right turn and picked up my flight leader. I looked behind and saw the plane had crashed and the pilot had gotten out and I saw him in the chute. We rejoined the squadron. I claim one (1) Me109 Destroyed shared with Capt. Vitek."

On January 26, 1945, he was promoted to 1st Lieutenant. He was transferred to the  HQ of the 67th Fighter Wing on February 6, 1945. For his service, he was awarded the Distinguished Flying Cross (DFC) and the Air Medal with 5 Oak Leaf Clusters. After the war, he married his sweetheart Lillian Bingle, her name used as a nose art to his personal P-51 Mustang. The couple was blessed with two sons. George Contos passed on October 21, 2002. 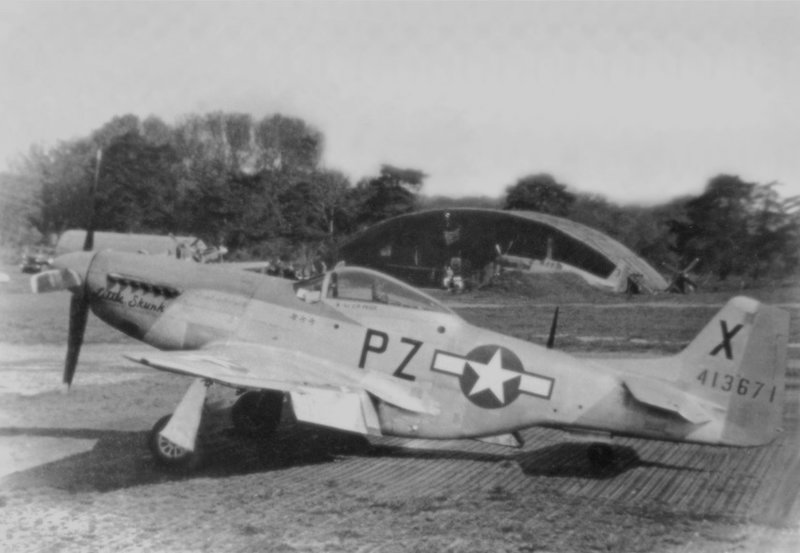 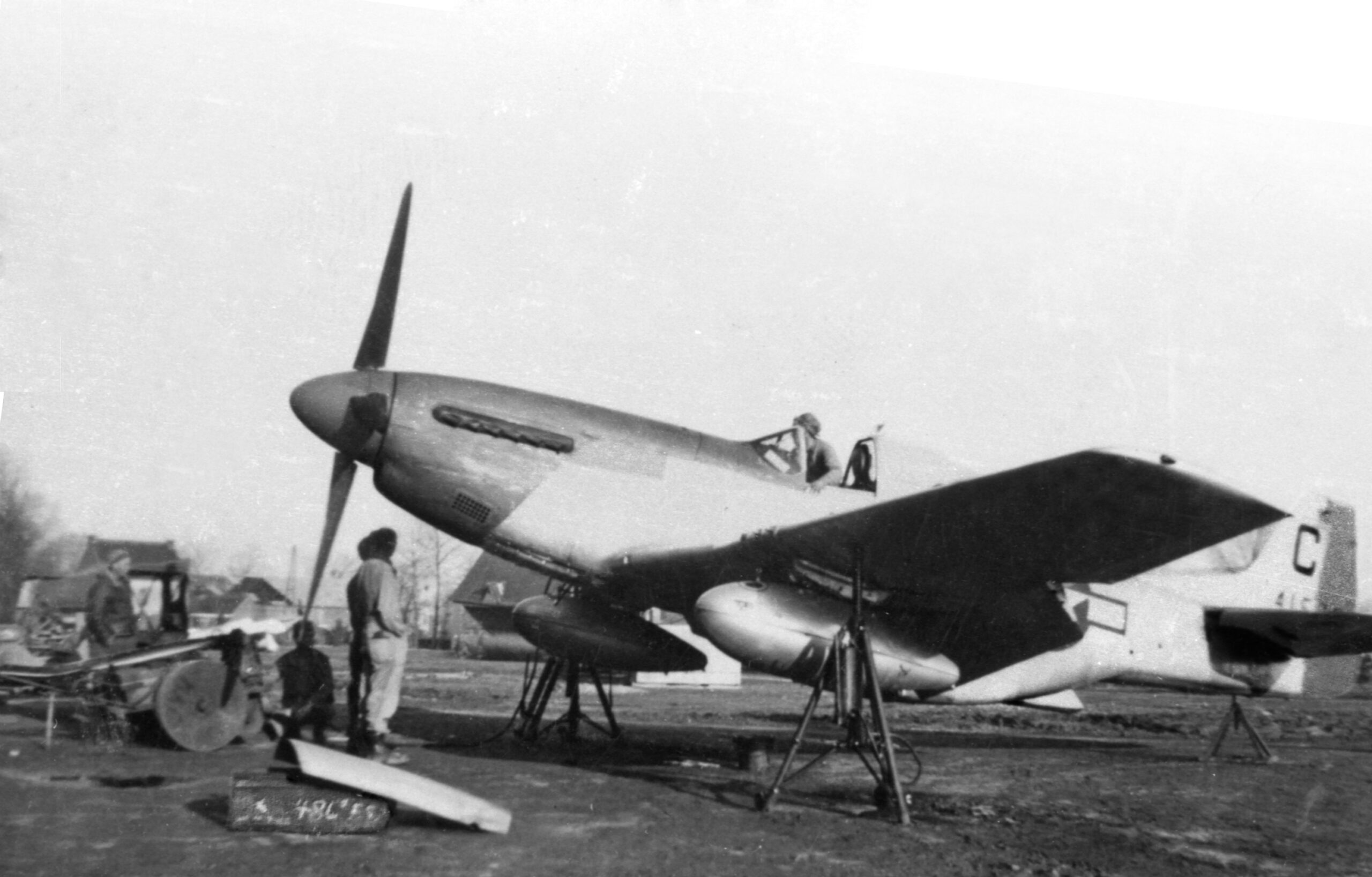 P-51D Mustang 44-15701, PZ-C, under maintenance and undercarriage trials, while sitting on hydraulic jacks. The nose art with the name of George Contos sweetheart ‘LILIAN’ isn’t applied yet. (Peter Randall) 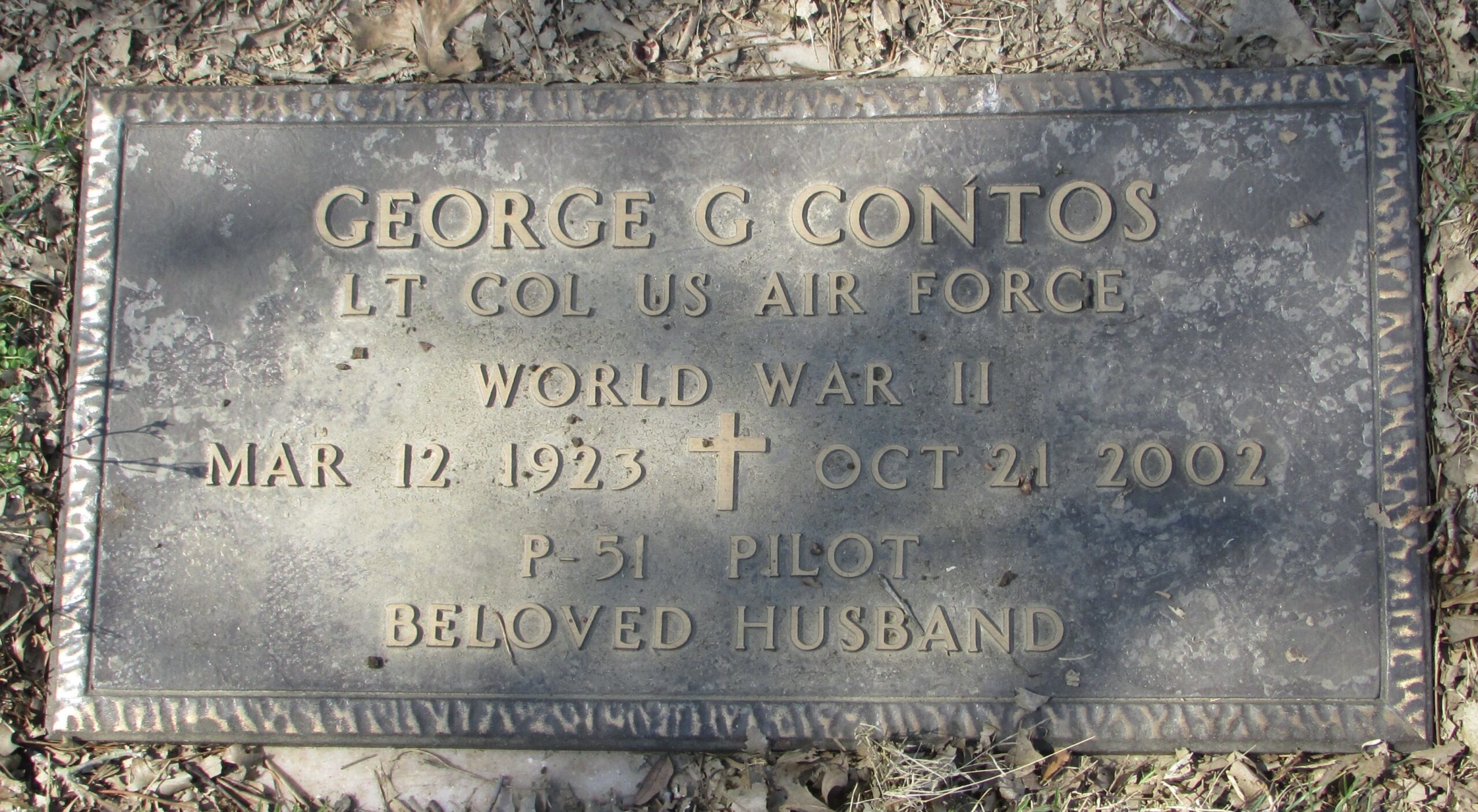 The memorial plaque in George's final resting place in North Lawn Cemetery in Canton, Stark County, Ohio where it is donated the fact of being a US Air Force WW2 Veteran and P-51 pilot. (https://www.findagrave.com/)