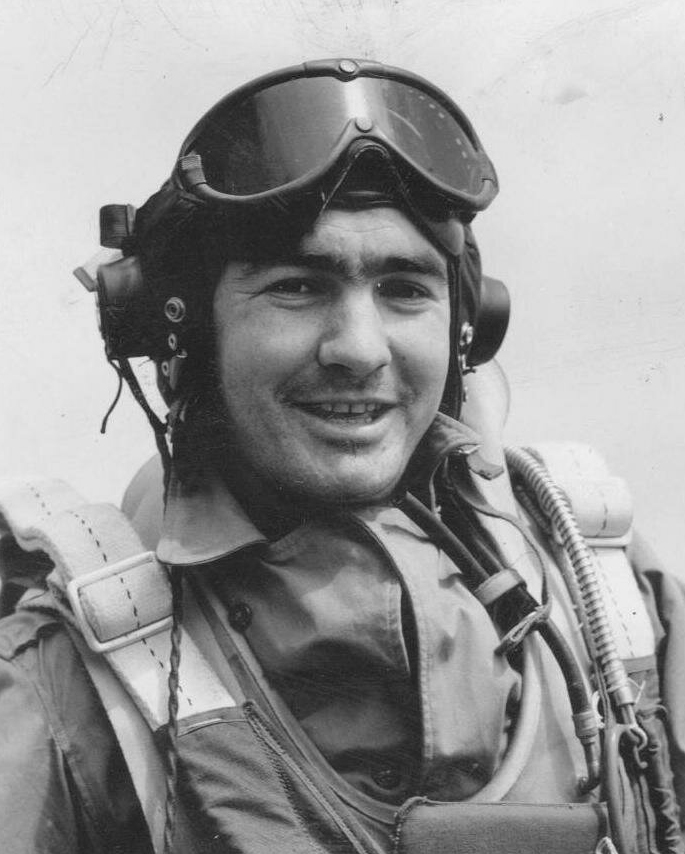 George Kouris in his Mustang, before or after another mission, wearing his full flight gear.Worth noting is that the majority of the kills made by USAAF pilots were claimed by men who were not aces, but were very efficient either as wingmen or leaders. George did not claim any kills against enemy aircraft before he was forced to bail out over Germany. It should be noted that he never lost his leader to enemy fire during the dogfights he took part in and he also flew in the dangerous strafing missions from the start. Those low-level strafing missions were responsible for the majority of USAAF fighter losses and, in a way, fighting the Luftwaffe during the closing months of the war was less dangerous. (Greeksinforeigncockpits via www.357thfightergroup.org)

George Kouris was born in Norwalk, Connecticut on May 1, 1923. He was the son of Charles and Anna Kouris with heritage from Cyprus and Sparta, Peloponnese. The couple had also three more children while in Greece. The difficulties of the early 20th century led the family to immigrate to the United States, where George born. He was intrigued by aviation during an air show in Norwalk in 1933. In 1937 the family moved to Boston Massachusetts. After the outbreak of World War 2, he enlisted as a private in US Army on October 17, 1942, although he was chosen as an aviation cadet in January 1943, because of his previous college studies. He successfully completed his training and he was posted for service in the European Theater of Operations, serving for the 8th Fighter Air Force. After a brief spell in the 496th Fighter Training Group and his introduction to the P-51 Mustang, he was posted to the famous 357th Fighter Group, specifically to the 364th Fighter Squadron. Before being transferred to the 357th FG’s powerful P-51 Mustangs, the Greek American pilot had almost 500 hours on PT-17s, BT-13s, AT-6 and P-40Ns in his logbook. Kouris completed thirty combat missions and approximately 120 hours until he was forced to bail out on February 3, 1945, due to engine problems. However in the German report, known as 'J' report in USAAF, it was mentioned that he was shot down and claimed that this was the pilot's point of view! Kouris became a POW (Prisoner of War) and held in Stalag Luftwaffe III, before he was liberated in May 1945. George didn’t claim any kill over an enemy fighter but he was proud not to have lost a leader while he flew as a wingman, protecting his tail. He had a personal Mustang in which he flew most of his missions. It was the P-51D, 44-13586, C5-ZZ, which he named it as 'GREECE LIGHTNING' in order to honor his Hellenic Parentage. He remained on active duty with the USAAF until June 1947. During these years, he was retrained and flew multi-engine aircraft. For his service, he was awarded the Air Medal with 2 Oak Leaf Clusters, the Purple Heart, and the POW Medal. Konnie, his elder brother was also a USAAF pilot and flew twin-engine B-25 Mitchells, but didn't saw combat as he finished his training after WW 2 ended. After George was relieved from his service he studied Mechanical Engineering and he worked for Hughes Aerospace company for 33 years. He married the Greek parentage Nancy Paulides and he has two sons. He is 94 years old and he lives in Alhambra, California.

P-51D-5NA Mustang, 44-13586, was the personal aircraft of Lt. George Kouris. He named it 'GREECE LIGHTNING' to honor his Greek heritage and applied a yellow lightning bolt to the forward fuselage. Although there is at least one photo of this fighter, the authors could not source it. The profile was created from advice received from the veteran himself. In his correspondence to the authors, he wrote that the side code was the letter 'T'. Although this is what Kouris remembered, the authors also consulted Eighth Air Force experts, specifically Mr. Peter Randall, owner of the website http://www.littlefriends.co.uk. According to him, based on various facts:

"From the 'J' report, it seems that the damage to the airframe was so great that the Germans were unable to properly describe the markings visible on what was left of the wreckage. This would account for why they had the last digit of the serial number incorrect. Also, from other German reports, they would normally describe the fuselage markings as, for example, C5-Z. I think therefore that we can only conclude that the ‘J’ report cannot be used to determine the unit code markings and even the question mark after the 'Z' indicates that they could not be certain about even that. Looking again at my friend Ted Damick’s database on the P-51, he certainly has it listed as C5-ZZ, having previously been C5-T,'Hurry Home Honey', and then C5-T, 'Flak Happy', before being reassigned to Kouris. If there is any doubt that information might be dubious in his data, Ted marks it with an asterisk and there is no asterisk against the C5-ZZ on this one. I don’t know if it is any guide, but when Peterson’s replacement C5µT, 'Hurry Home Honey', 44-14868, was reassigned to Roland Wright post-war, that also was re-coded to C5-ZZ. Might be coincidence but might also indicate a trend. The one thing we can be certain of though is that the 357th FG were somewhat unpredictable about marking their duplicated code letters and like the 339th FG, the bar when used could be over, under or to the rear of the letter. I would say therefore that the balance of evidence indicates that it was coded 'ZZ'."

Returning to the same subject again he wrote:

"44-13586 C5µT was Maj. Peterson’s 'Hurry Home Honey' until he completed his first tour of duty in July 1944. It was then reassigned to Horace Howell who named it 'Flak Happy' and Howell flew it as C5-T on the 'Frantic 5' mission of 6th August. Howell also damaged it in a mid-air collision on 1 September. Peterson returned for a second tour. I do not have the date but normally it would be about 10 weeks after completing his first tour which would make it at some time in October 1944. He took 44-14868 as his next C5-T 'Hurry Home Honey' and this was received by the 357th on 22 September which ties in well with him starting his second tour. This, of course, means that Howell could no longer have C5-T as it was Peterson’s ‘personal’ code letter, and he kept this P-51 until completing his second tour at sometime in February 1945. Howell completed his tour and went home in December 1944 at which time ‘13586 would have most likely be reassigned to Kouris. However, due to Peterson returning, it would not have been C5-T as Howell would have had to change the code in September/October. The conclusion therefore that Kouris could not have had it as C5-T but he might well remember it being coded as such with Peterson and Howell flying it. My money is still in ZZ!”