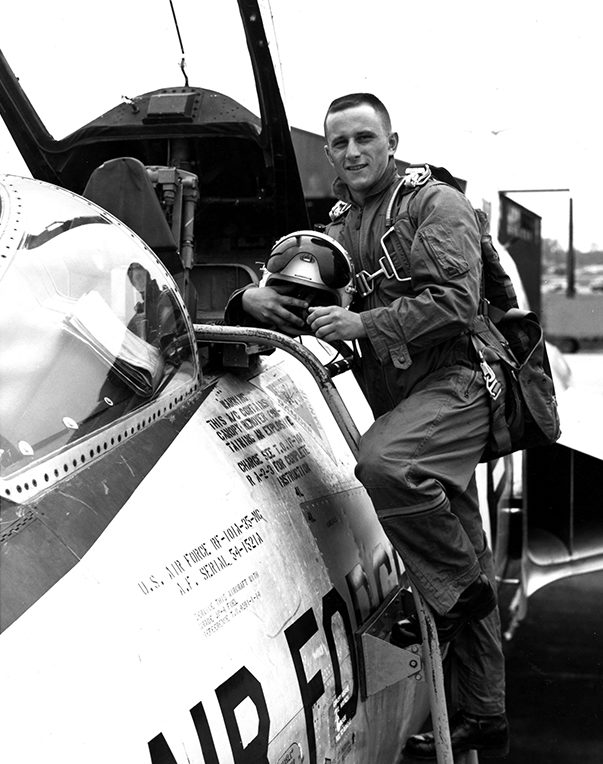 “I graduated in1963 from ‘The Citadel’ Military College, South Carolina. Because I did not like to march, they offered me the chance to be in the flying program, which was the first step to flight training. After graduation, I entered the United States Air Force Flight Training Program at Laredo AFB, Texas. The first jet plane I flew was the T-37 and then the T-33. In order to graduate from Flight School, you had to fly solo in a T-33, land somewhere else and return at night at low altitude. As I approached the estimated time to land at Laredo AFB, I looked up and saw a huge mountain in front of me. There are no mountains in Texas. I was in Mexico because my heading indicator had failed! Using my standby whiskey compass, I flew on a north heading and eventually landed at Laredo AFB, Texas. My first assignment after graduation from Pilot Training in December 1964 was the Air Defense Command learning to fly the F-101 Interceptor at Tyndall, AFB, Florida and then to Wurtsmith, AFB, Michigan. During my time at Wurtsmith, I experienced many exciting missions. The most exciting was landing in formation in winter, being told the runway was dry and sliding off the runway. After I climbed out of the airplane that was lying on its side in the snow, my Squadron Commander approached me and said I had to fly again that night or I would never fly again. So I did." 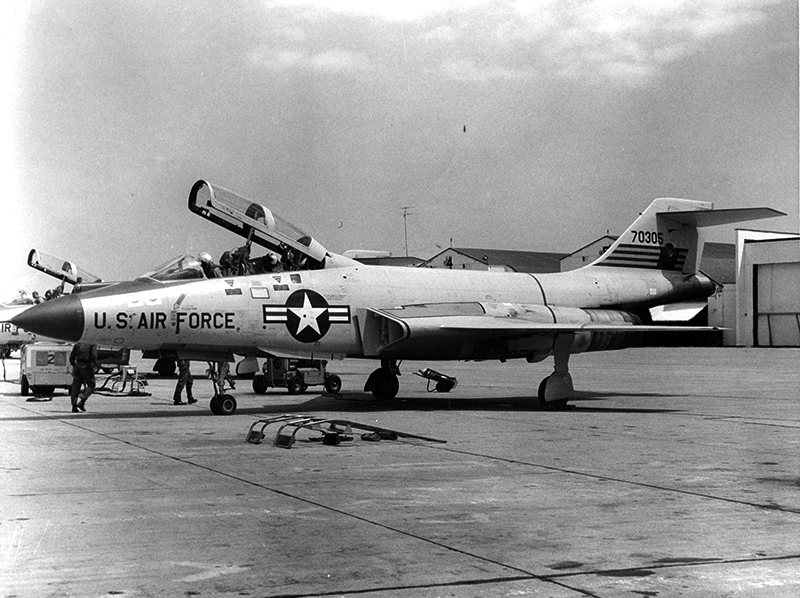 Below Left & Above: The first assignment of Gus Stathis as a fighter pilot was with Air Defense Command (ADC) F-101Bs in Tyndall AFB Fla. In the left photo, the Greek American pilot enters the cockpit of an F-101A while the one below shows one of the fighters flown by himself, specifically 84th FIS, F-101B-85-MC Voodoo57-0305. Later it was transferred to RCAF and served with 416 and 426 Squadrons, before it crashed at CFB Bagotville on Dec. 1, 1977. The F-101 Voodoo was a product of the great fighter dynasty founded by James S. McDonnell in St. Louis, Missouri and inherited by today’s Boeing Corporation. The F-101 was big, heavy, sturdy, and fast. It was unforgiving. Some pilots say it was more difficult to fly than any other warplane that ever entered squadron service. As a reconnaissance craft, the RF-101C challenged North Vietnam’s missiles and MiGs. As an interceptor, the Voodoo guarded North America wearing the US and Canadian markings. The Voodoo had a pitch-up problem caused by the way air flowed over its wings and under its high tail. The tendency to unexpectedly jerk into a nose-high attitude killed several pilots. A pitch inhibitor, or “stick knocker,” installed in mid-life, was little help. The Voodoo’s twin Pratt & Whitney J57-P-55 turbojets turbojet engines on full afterburner kicked back 16,900 pounds of thrust (75.2 kN) each. The fuselage of an F-101B at 67 feet 5 inches was about a yard (or a meter) longer than that of a DC-3 transport. The F-101B (originally, F-109, a designation often mistakenly attributed to a Bell design) was the two-seat, long-range interceptor. McDonnell built 479 examples for the Air Defense Command (ADC), making this the most numerous Voodoo. Armament initially comprised two Hughes GAR-8 (AIM-4) Falcon missiles. The F-101B was modified in 1961 to carry two MB-1 (AIR-2A) Genie rockets with atomic warheads, designed to scatter incoming Soviet bomber formations. The F-101B entered service in 1959. F-101Bs stayed in ADC until 1972. The ANG operated the F-101B from 1969 to 1982. F-101Bs built or converted as “two-seat dual control aircraft” were redesignated F-101F long after the conversion took place. Some F-101Fs were among the 132 F-101B/F interceptors flown by Canada (Copyright Gus J. Stathis, further information by Robert Dorr)

USAF RF-4C 65-0828 was a well-known fighter of the 11th TRS during the squadron deployment in RTAB Udorn, Thailand and possibly flown by Gus J. Stathis. The RF-4C All-weather tactical reconnaissance version for the US Air Force was equipped with AN/APQ-99 (later AN/APQ-172) radar and it was similar to RF-4B but with a wider choice of camera fits, including a centreline pod for the gigantic HIAC-1 LOROP (Long Range Oblique Photography) camera, capable of taking high-resolution images of objects 100 miles (160 km) away. Many aircraft were refitted with a more spacious bulging streamlined nose. A sub-variant, to be designated RF-4C(H) was proposed as a night "hunter" aircraft using infrared equipment instead of cameras under Operation Shed Light. In the end, none were converted. While usually unarmed, RF-4Cs retained the ability to carry a nuclear weapon on the centerline pylon. Additionally, the RF-4Cs of the Alabama, Nevada and RF-4 Fighter Weapons School were modified to carry the AIM-9 Air to Air Missile. These modernized RF-4Cs of the Alabama and Nevada Air National Guard extensively participated in the Gulf War. 11th TRS was activated as a McDonnell Douglas RF-4C Phantom II reconnaissance squadron in 1966 under Tactical Air Command. The squadron deployed to Thailand shortly after formation, flying tactical reconnaissance missions primarily over North Vietnam and selected locations in Laos and Cambodia. The squadron provided much of the aerial photographic intelligence obtained during the Vietnam War, especially that from North Vietnam. In the fall of 1970, the squadron's parent wing was phased down as part of the overall American withdrawal from the Vietnam War, returned to Shaw Air Force Base, South Carolina where the unit was inactivated in early 1971. (Copyright Tom Cooper)

In 1967, Lt. Col. Stathis was reassigned to the 67th Tactical Reconnaissance Wing (TRW) at Mountain Home AFB, Idaho, for upgrading in the RF-4C aircraft. After graduation in June 1968, he reported for his first overseas assignment to the 15th Tactical Reconnaissance Squadron at Kadena AB, Okinawa. His duties included Flight Commander, Instructor Pilot, and Detachment Commander at Osan AB, Korea. He later posted to Udorn RTAB for his Vietnam combat tour. According to his words:

"In 1968, I was qualified in the RF-4C and sent to Kadena AFB, Okinawa, because the North Koreans captured a U.S. intelligence ship, the Pueblo. If it wasn’t for the Pueblo Incident, I would not have met my wife who was a School teacher at Kadena, AFB, Okinawa. Aunt Stella, in Piraeus, when introduced to Pauline (of Irish descent), felt the marriage was fine since the Greeks contributed to the “Creation of Ireland.” After Okinawa, I was assigned to the 11th TRS at Udorn AB, Thailand, flying reconnaissance missions over Laos and North Vietnam. While at Udorn, three RF-4 crews and F-4 crews were designated to fly fast FAC missions over high threat areas. Call signs were Tiger and the RF-4 call sign was Bullwhip. After days of flying, my Squadron Commander asked if I wanted to escort visiting USO girls. Of course, I did. The next day I while lying on the beach with four beautiful women, a KC-135 pilot came and asked if I was a Bullwhip pilot. After I said, yes, he said that the North Vietnamese had just shot down a Bullwhip. It was my flight commander, Cyril Crawford who was flying in my place. While I was lying on the lake with four beautiful women, my boss was hanging in the trees. He was fortunately picked up by the CIA."

In addition to flying combat flights over Laos and North Vietnam, he served as the Standardization Evaluation Flight Evaluator and flew in the visual reconnaissance program. After the redeployment of the 11th TRS to CONUS, Lt. Col. Stathis was assigned to the 7th  AF as an Air Operations Officer for the Directorate of Reconnaissance specializing in out of country flights. During this short tour, he continued to fly combat missions with the 14th TRS out of Udorn RTAB, Thailand.  Upon his return to the United States in February 1971, Lt. Col. Stathis was assigned to the 67th TRW, Bergstrom AFB, Texas. During this assignment, he served as an Instructor Pilot and Flight Commander.  Concluding with Lt Colonel words:

"My Air Force flying experience has been in jet aircraft in the role of  Air Defense and Tactical Reconnaissance. I have accumulated a total of 4000 hours flying the T-33, F-101B, F-102 and RF-4C. I was awarded the Distinguished Flying Cross, Bronze Star, Meritorious Service Medal (2 OLC), Air Medal (6 OLC) and the Air Force Commendation, Medal. I am married to the former Pauline Morris of Boston, Mass. We have one child, Christina Metaxia Stathis. In summary, I feel that if I had not been raised by parents who emigrated from Greece and lived by the law and taught me how to survive, I would not be able to write this.”

Middle Right: The Greek American pilot photographed during his assignment to the 67th TRW, Bergstrom AFB, Texas where he served as an Instructor Pilot and Flight Commander.  (Copyright Gus Stathis)

Below: A U.S. Air Force McDonnell RF-4C Phantom II aircraft (s/n 65-0882) from the 11th Tactical Reconnaissance Squadron being shot down by a SA-2 on 12 August 1967 near Hanoi, North Vietnam. Capts. Edwin Atterberry and Thomas Parrott were captured after ejecting. Atterberry died in the hands of the North Vietnamese after an escape attempt and Parrott was released at the end of the war. SAM systems remained a major threat for the United States Air Force, Navy and Marine pilots throughout the war, although progress was made with the introduction of ECM pods and Anti-Radar missiles and the subsequent Wild Weasel missions. (National Museum of the U.S. Air Force photo 090605-F-1234P-021) 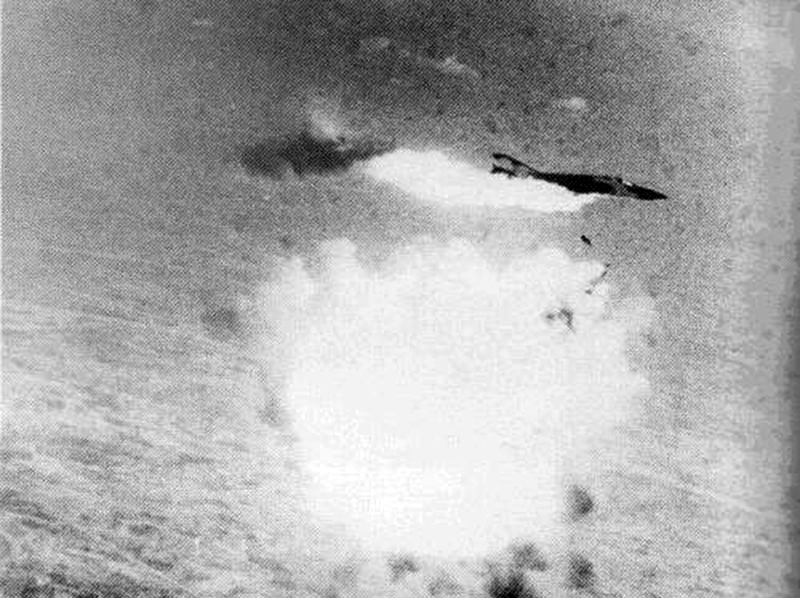 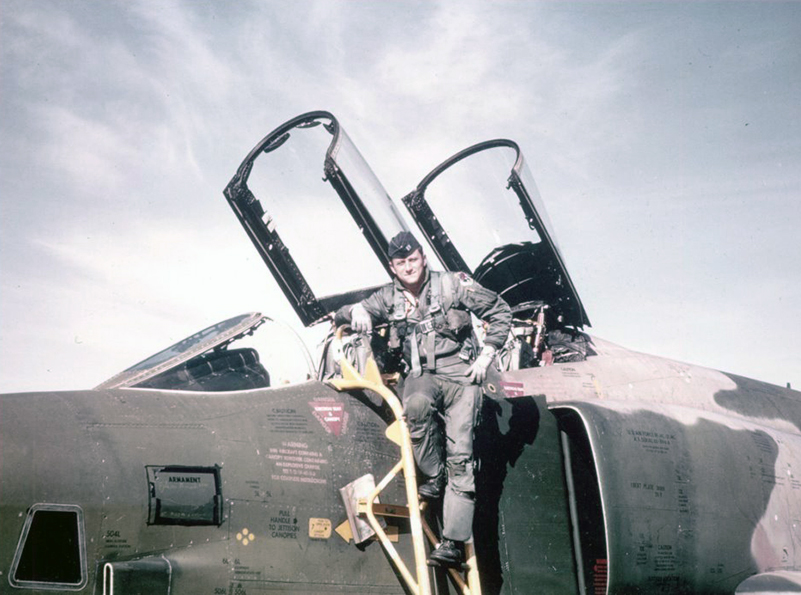 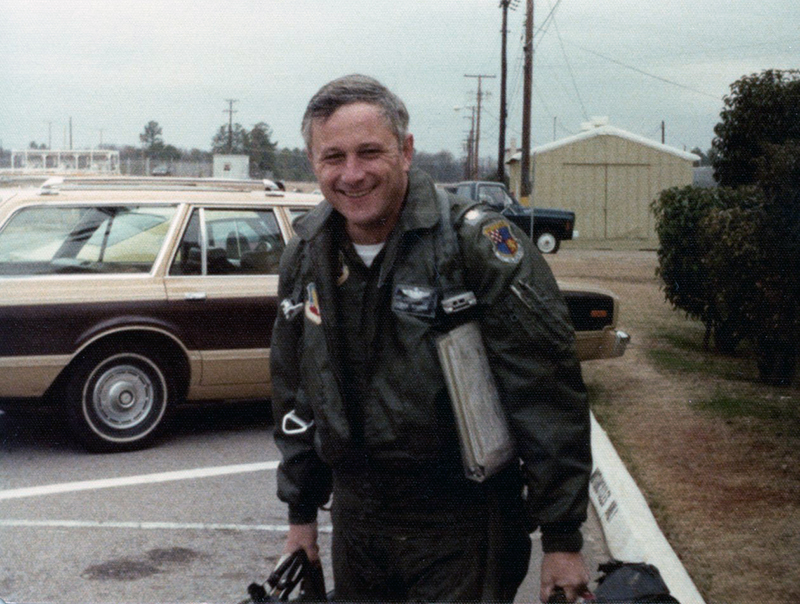 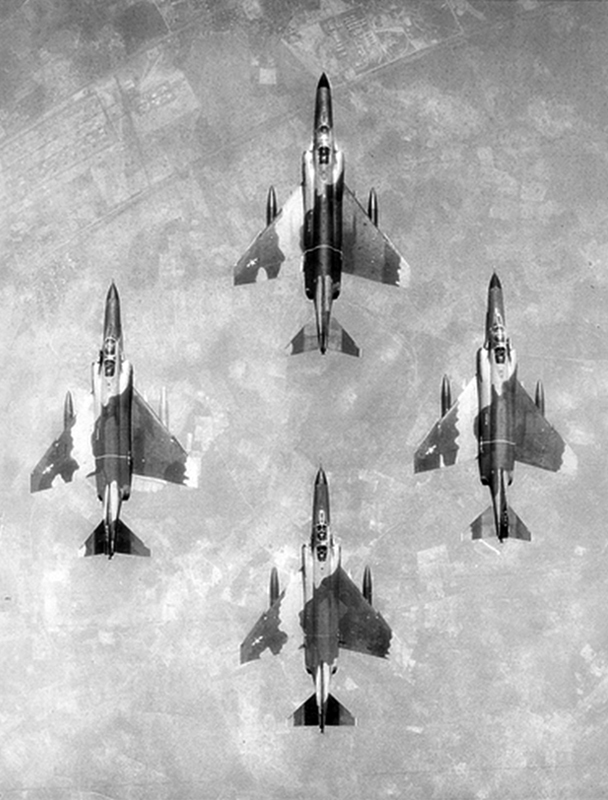