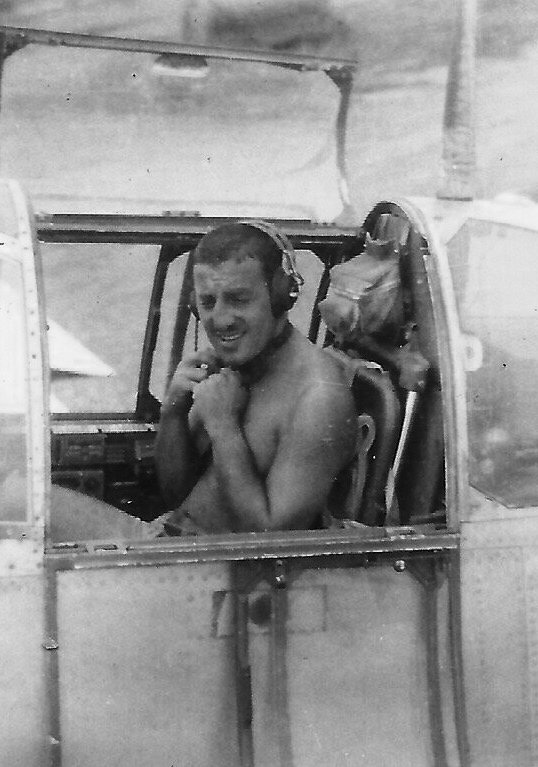 Lt. Zavakos sitting in the cockpit of a P-51B while testing the fighter radios. The P-51 was well-suited for dive-bombing bridges because it was easy to trim in a dive, whereas the P-40 had a tendency to roll. Lt. Harry Zavakos gained a reputation as the 76th’s premier bridge-buster and proved to be so adept in this role that whenever he flew a sortie his flight was given two targets, one for him and one for the three pilots flying with him. (Greeksinforeigncockpits via Renea Zavakos)

Harry Zavakos was born on December 5, 1920, in Dayton Ohio. He was the son of George Zavakos and Konstantina (Dena) Fragia, a Greek couple who immigrated from Greece. His father came in the US during 1903 from a small village named Petrina, near Sparta in Laconia district, and became a successful businessman. Harry's brother, Frank, was also a pilot who flew with the American manned RAF, No. 71 'Eagle' Squadron. Unfortunately, he was killed in action over the North Sea during an ASR mission on June 6, 1942. Harry was also passioned for flying and before the outbreak of WW2 he had logged almost 100 hours in Piper Cubs airplanes. During his college years, he also attended the CPTP courses and he also joined the ROTC program of the United States Army Air Force (USAAF). His brother death motivated him to apply for service in USAAF and after his training, he was posted to China, specifically to the 76th Fighter Squadron of the 23rd Fighter Group. He flew P-40K Warhawks and P-51A Mustangs and completed almost 100 missions while credited with one kill. He crash-landed his P-40K Warhawk on December 24, 1943, after his fighter was damaged while dogfighting Japanese airplanes which attacked the B-25 formation, his squadron protected. He escaped unhurt and returned to his squadron 10 days later. On March 29, 1944, he engaged with Japanese fighters and while he was ready to achieve his second kill, one or more enemy 'Hamp' fighters, closed behind him and opened upon him. His plane took the worst beating of his career as he was hit in both wings, the vertical and horizontal stabilizer, fuselage, radio, and cockpit. Lt. Zavakos was only slightly scratched on his arm and leg by fragments. His comrades regret though that Zavakos radio was knocked out, for they certainly have enjoyed his verbal reactions to this affray, as he usually blasphemes and cursing, while in combat! During his service, he became proficient in dive bombing and soon gained the reputation as the 76th FS premier bridge buster. He proved to be so adept in this role that whenever he flew a sortie his flight was given two targets. One for him and another for the rest of the flight members! No wonder why his fellow pilots called him as 'HOT BOMB'. On June 6, 1944, he flew a unique mission concerning 'Greeks in Foreign Cockpits' along with the 75th Fighter Squadron Greek parentage pilot, James Vurgaropulos. The both flew a reconnaissance mission, deep inside the Japanese held territory, flying P-51Bs. The 23rd FG records referred to their joint mission by naming them as 'THE TERRIBLE GREEKS'. For his actions he was awarded with the Distinguished Flying Cross (DFC) and an Oak Leaf Cluster, the Air Medal with one Oak Leaf Cluster as well as the Purple Heart with one Oak Leaf Cluster. After he was honorably discharged from the service he worked in the family bowling business. Unfortunately on March 7, 1977 he was murdered outside his bowling store, just like his father also murdered in the same place, 30 years ago! Both cases never closed.

Although P-40K Warhawk '102' was the fighter in which Lt. Richard Perkins crash landed in Canton, on December 23, 1943, the authors selected this aircraft in order to represent the fighter used by Zavakos in an official photo of the squadron’s pilots and their mounts. That day, the Warhawk had his name, as well as a kill marking (from the mission on March 4, 1944), applied under the canopy. It must be noted that the Greek American pilot achieved the kill while at the controls of a P-51A Mustang. During his tour of duty, he only flew eleven operational sorties in Warhawks. (Copyright Gaetan Marie)