James Constantine Sakellariades was born in Washington. He was the son of Constantine Sakellariades from Isaris village in Arcadia district in Peloponnese, Greece and Aspasia Stratis Economon from Kastaboli village in the Eastern Thrace, Turkey. The couple had also one daughter, Eleni Kleio and both were very active in helping young Greek immigrants to settle in Washington. The couple held strong bonds with Greece and their families and made many trips back home. On one of those trips in 1932, the young James followed his parents on an unforgettable tour where he explored his roots. The young Greek American graduated from Eastern High School and later joined the Marshall College in Huntington West Virginia. He joined the CPTP program and later entered the V-5 Naval Reserve Program. He became a naval aviator and attached to Bombing Squadron 83 flying the SB2C Helldiver. However, he soon transferred to the new Fighter-Bomber Squadron VBF-83 flying the famous F4U Corsair and was assigned to the aircraft carrier USS Essex. He flew his first combat mission on March 18, 1945.  VBF-83's Corsairs were launched for a strike and a fighter sweep to Karasahara, Nittagahara, and Tomitaka airfields armed with bombs. After successfully dropping their bombs the aggressive Navy pilots started to look for enemy fighters to engage. Over Tomitaka, the Japanese had aircraft aloft, and some wild dogfights ensued. Eight Japanese aircraft were claimed destroyed. Lt.(JG) James C. Sakellariades shot down two Zekes confirmed and credited with one more as probable in his first combat sortie! Later he was taken to the bridge after trapping to shake Rear Admiral Frederick C. Sherman's hand! He was so excited about the victory that he hugged the battle-hardened veteran! His fellow officers in the junior officers' bunk room teased him about his hugging the admiral! They probably didn’t know that Greeks were emotional people. On April 7, during a CAP above the Task Force James was credited with 3 confirmed kills (the two of those shared with other VBF-83 pilots) over D4Y Judy’s Kamikaze bombers raising his total score to a total of four confirmed kills and one probable. However, he developed an engine problem and diverted to the USS Bataan. There he knew many of the officers with whom he was trained in the past and they invited him as a guest of honor to the Captain's table for dinner.

Four days later during an uneventful TCAP Ens. James C. Sakellariades’s R-2800-10W once more developed engine trouble and safely diverted once more to USS Bataan (CVL-29). As he was climbing out of his cockpit the Air Boss on the carrier's island using his air horn said. “Welcome home Greek. Next time bring your damned mess share!”  On April 16 he flew a strike in Kanoya airfield in Kyushu island, one of the Kamikaze bases. With his Corsair armed with 6 HAVR rockets, he flamed many ground targets and was also credited with one confirmed ground victory of an unknown airplane type. On May 20 he took part in The most unique close support mission in Essex’s history launched from her decks, consisting of four Corsairs and eight Avengers armed with one 500-pound GP bomb apiece. The Navy planes provided close air support to a pinned Marine unit in Okinawa hitting Japanese defensive positions inside caves, only a few meters from the American soldiers. For his service, he was awarded two Distinguished Flying Crosses and five Air Medals while participating in 25 wartime missions, two of them over Tokyo. After the war ended, he graduated from Cornell University with a degree in hotel administration. He stayed on active duty until 1963 and then switched to the Navy Reserve for 20 more years while working as a hotelier. Cmdr. Sakes, as he was later known after changing his surname to a more English-friendly pronunciation,  worked for Holiday Inn from 1963 to 1983, opening and managing hotels in the U.S. and overseas. He managed hotels in Sarasota, Fla., and Minneapolis Mn., and was district manager of Holiday Inn properties in Morocco, before taking control of the Holiday Inn in Gaithersburg Md. James ‘Greek’ Sakellariades pass away on December 16, 2009. Funeral services and burial with full military honors were held at Arlington National Cemetery on Feb. 16, 2010.

Further details and first-hand accounts can be found in a massive chapter about the 'GREEK'  Volume C' of the 'GREEKS IN FOREIGN COCKPITS' series of books. 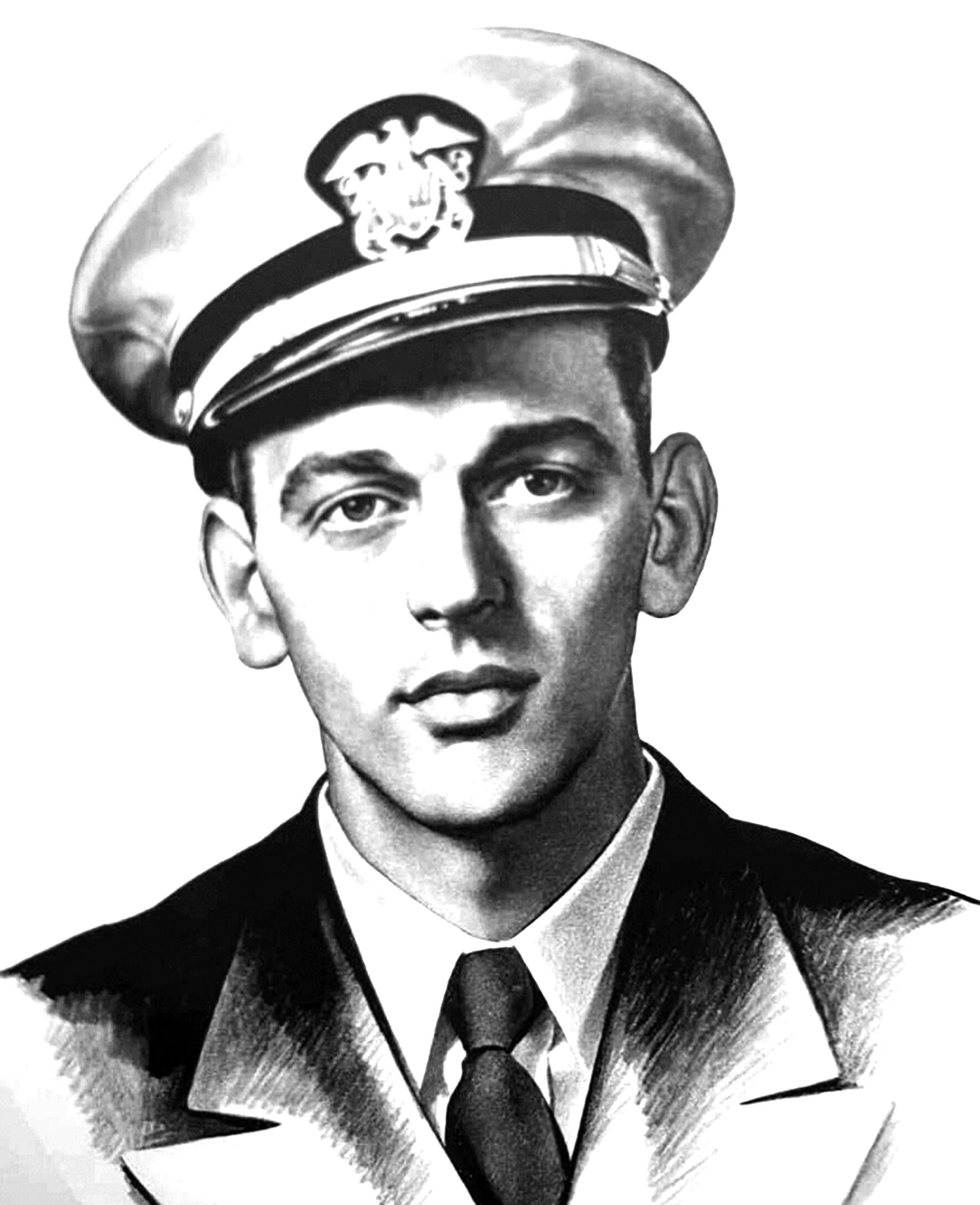 A pencil portrait of James Sakellariades, as was presented in a newspaper article in Washington, DC, which described the Greek American pilot’s service in the Pacific. (Greg Sakellariades Archive) 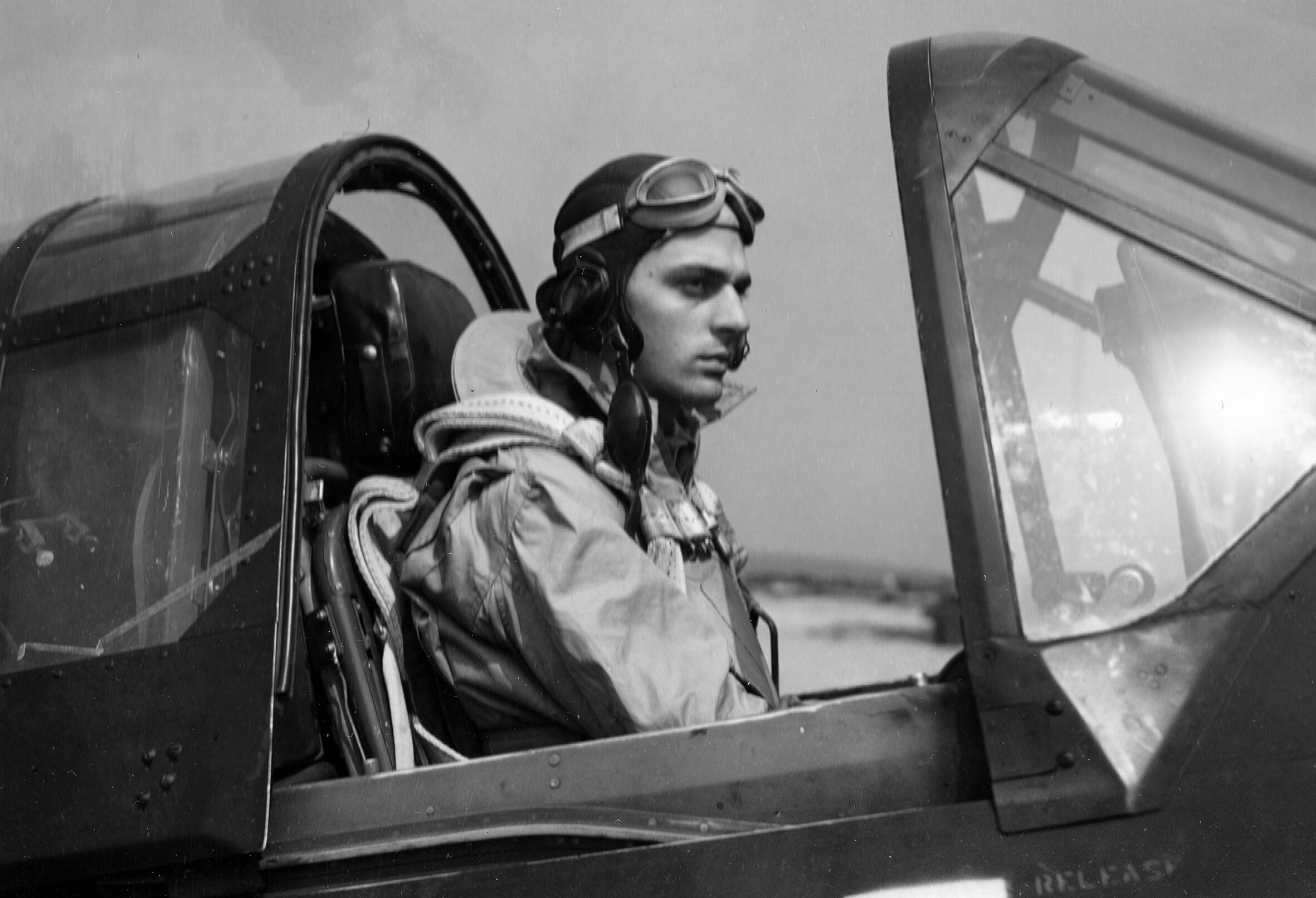 Typical aviator photo taken by the USN showing Sakellariades during his training with the SB2C Helldivers of VB-83 while stationed at NAS Wildwood. James’ days of flying the Curtiss 'Beast' would soon end when he transferred to the newly formed VBF-83 equipped with the Vought F4U Corsair, the fighter-bomber he would fly operationally. The Greek American pilot was a fully qualified dive-bomber pilot before he transferred to fighter-bombers. (NARA 80-G-348053)

VBF-83 flew the F4U-1D Corsair or the equivalent Goodyear-built FG-1D. The markings of the Corsairs, as shown by these profiles, varied quite a bit between March and September. F4U-1D Corsair ‘185’ carried typical markings of the beginning of Essex’s 1945 cruise. The aircraft sports two white diamonds, the geometric markings identifying aircraft belonging to CVG-83. These were generally known as 'G-Symbols' and every Carrier Air Group had its unique one. Corsair ‘185’ had a successful career, as evidenced by the six 'kill markings' painted beneath the canopy. The exact identity of this aircraft is unknown as the BuNo is only partially visible in the photos and appears to be Χ77Χ7. It might be F4U-1D BuNo 57727, but there are other possibilities. If it is actually BuNo 57727, two or three of the Japanese flags denote Sakellariades’ two confirmed victories and maybe his one probable, credited to him on 18 March 1945. Many representations of VBF-83 Corsairs show the 'G-Symbols' repeated beneath the left-wing, while they were certainly repeated on the upper right wing. There is no evidence they were painted on the underside of the left-wing. The 'G-Symbols' was short-lived as they were only used from 27 January to 27 July 1945, after which they were replaced by tail codes identifying the Carrier Air Group. The tail code for CVG-83 was 'F'. The new codes were meant to simplify recognition, but most would agree that VBF-83’s Corsairs looked somewhat blander as a result. With the change, VBF-83 also assumed numbers in the 2XX range whereas it had previously carried numbers ranging from 150 to 199. (Copyright Gaetan Marie)