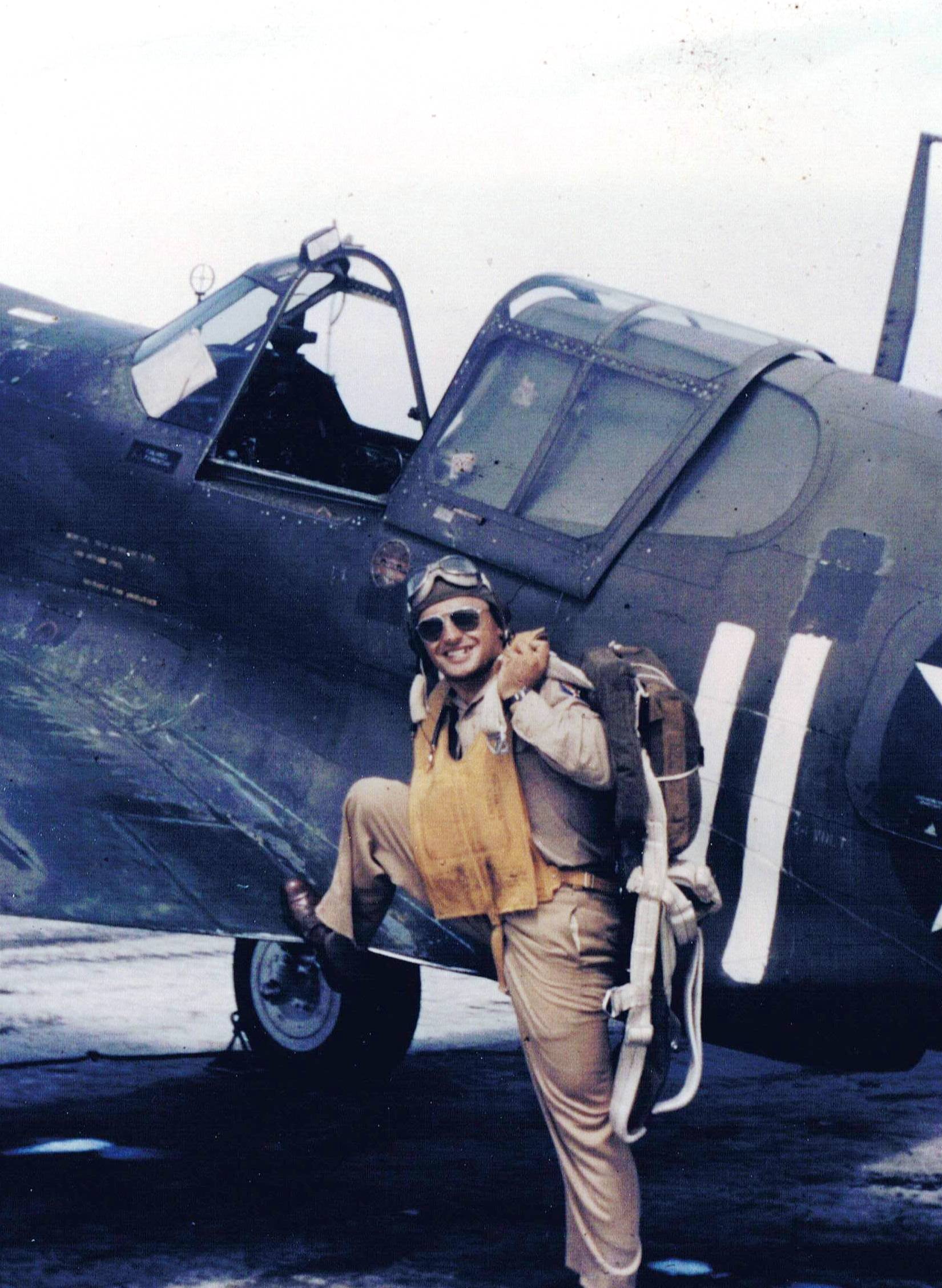 James ready to climb in a Curtiss P-40K-10-CU (serial 42-9985) Warhawk for another operational training sortie while flying from Sarasota Airfield. This P-40K is one of the best known Warhawks. It served at the Army Air Force Tactical Centre, Orlando, Florida. It was probably the commander’s aircraft judging by the colourful rear fuselage and spinner bands. It carried a huge shark’s mouth, a far cry from those worn by the 'Flying Tigers' in China. Vurgaropulos took two pictures with it, but it is believed that this specific Warhawk was used to attract War Bonds from the civilian population. It is reported that many civilians also had their photos taken with this aircraft, during War Bonds campaign, in varius airfields (Greeksinforeigncockpits via Vurgaropulos Family)

James (Dimitrios) Vurgaropulos was the second Hellenic parentage pilot who fought in CBI (China - Burma - India) Theater of operations with the 23rd Fighter Group, along with Harry Zavakos, although he flew with the 75th FIghter Squadron instead of the 76th. He was born on February 26, 1919 in Lowell Massachusetts. His father was Konstantine Vurgaropulos, who’s heritage was from Kalambaka, Thessaly, in Trikala District who immigrated in the United States during 1905 while he was 19 years old. His mother was also Hellene, her name was Magdalene Bacos. After James completed his high school education he entered the local college named as Lowell Textile School (known today as the Lowell Technological Institute) and upon graduation he completed his studies in the Greek parochial School. From his early age he builded flying models along with his brother (also destined to be a USAAF Bombardier / Navigator) showing their tendency to aviation. He applied for aviation cadet in August 12, 1941, however he began his training in June 2, 1942. After completing his basic and advanced training he continued his operational training in the 337th Fighter Training Group in Sarasota Army Air Field, in Florida. Upon his successful completion he was posted in CBI and the 23rd Fighter Group, arriving in Kunming in November 1, 1943. He was transferred to the 76th Fighter Squadron and flew his first mission two days later, escorting B-24s in Hong Kong. James was an aggressive fighter pilot who later became an experienced flight leader who occasionally led the whole squadron in some of his missions. His best day in combat was on June 25, 1944, four days before his death, when he manage to destroy 1 enemy fighter, 1/2 probable as well as damaging another one. James flew mostly P-40N Warhawks and he was one of the 75th Fighter Squadron pilots who trained first in P-51B Mustangs in India, before his squadron re-equiped with the North American fighter. His most memorable Mustang mission was the joint reconaisance mission deep in the enemy territory on June 1, 1944, having as cover his fellow Greek American pilot, Harry Zavakos. The 23rd Fighter Group refered to them after this succesful mission as 'THE TERRIBLE GREEKS'. He completed more than 50 missions over CBI and he totally claimed 2 kills, 1 probable, 2 damaged and 1 more kill on the ground before he was killed in action. On June 29, 1944 he led a 75th Fighter Squadron Flight in an offensive sweep in Changsha Area. During a strafing run on enemy positions he was probably hit by anti aircraft fire and crashed in a building. For his actions Vurgaropulos awarded with Distinguished Flying Cross - DFC, the Air Medal with an Oak Leaf Cluster and the Purple Heart, all except the Air Medal, posthumously. Unfortunately he tragedy didn’t end for the family because his brother John also killed in action on February 24, 1945 when his B-26 Marauder crashed during a bombing mission. The Lowell city, in order to honor the memory of the two Greek heritage brothers named the local bridge as Vurgaropulos Memorial Bridge.

According to fellow 23rd FG pilot Donald S. Lopez Junior’s book, 'Into the Teeth of the Tiger', 'Vurgie' was assigned Warhawk '187'. During the time Lopez served with the Greek American pilot, the 75th FS flew mostly P-40N models. In Vurgaropulos’ MACR 16397, it is recorded that he crashed while flying P-40N 42-104941. Without having a photo reference to support the profile, the authors and the artist decided to create a P-40N carrying '187' on its tail, assuming that both Lopez’s book and the MACR referred to the same fighter. It wears the standard Olive Drab camouflage and Medium Green on the tail section. In addition to that, based upon other similar Warhawks of the 75th FS, his name was applied under the canopy along with two kill markings, in the shape of Japanese flags, to portray an accurate profile of what was probably the reality. James had two kills, one shared probable, three damaged, and one kill on the ground to his credit. He was considered to be one of the most experienced flight (and occasionally squadron) leaders of his unit. Notice the longer front teeth of the shark’s mouth, a distinctive characteristic of 75th FS Warhawks. (Copyright Gaetan Marie)