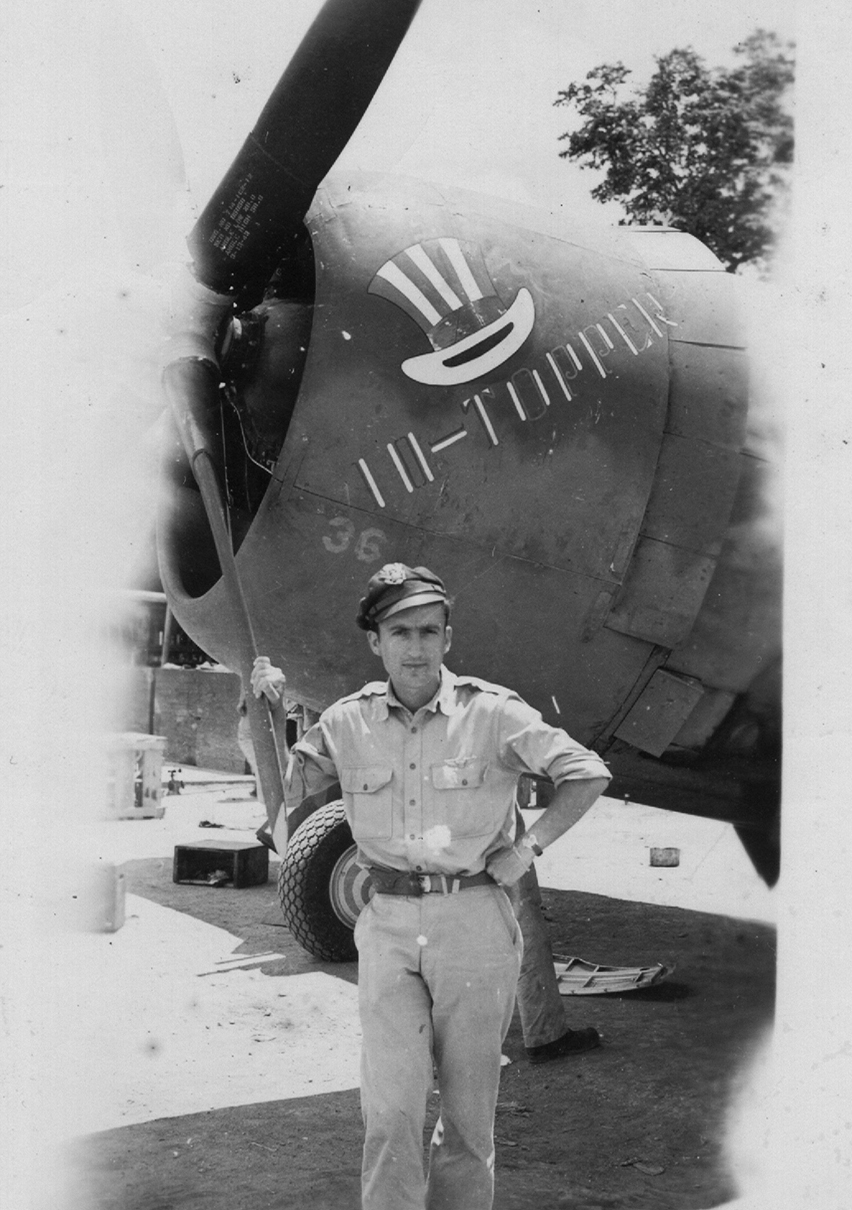 John in front of his personal Thunderbolt, a P-47D, 42-8081, which was named 'HI-TOPPER', in 17-Mile Drome, New Guinea. John was credited with 5 kills for which he was awarded with the DFC and an Oak Leaf Cluster. Although his fifth kill didnt mentioned in his DFC citation during the war, neither in the recent kill lists, it is mentioned in his separation record, dated December 18, 1945: "Destroyed 5 enemy fighters in aerial combat". (Greeksinforeigncockpits via Joanne Lolos Zimakas)

John Lolos was born in Springfield, Massachusetts on August 7, 1918. He was the son of Greek immigrants, Spiros Lolos and Melpomeni (Paparagopoulos) Lolos. Both his parents lived in Greece in Arcadia district before immigrated to the United States. His father was from Lagadia village and his mother from Daphne village. John grew up in Springfield, MA where he attended Technical High School. Interested in flying, he took private flying lessons in a Piper Cub before the war. Drafted by the U. S. Army, he enlisted in Springfield, MA on January 30, 1942. Lolos completed flight training with the 42-I class and he was named 2nd Lt before he was sent overseas to the South West Pacific theater of war. He became a P-47 Thunderbolt pilot in the 348th Fighter Group’s 341st Fighter Squadron in the Fifth Air Force, leading by the famous Neel Kearby. John logged over 143 combat missions and 390 combat hours over 18 months. During his final months, he was posted along with other experienced pilots of his squadron, to the 460th Fighter Squadron, which was to become the fourth Squadron of the 348th Fighter Group. For his extraordinary actions, he earned the Distinguished Flying Cross with Oak Leaf Cluster. Also, he was awarded the Air Medal and three Oak Leaf Cluster for completing combat missions over enemy territory engaging the Japanese forces and the Purple Heart. He is credited with four victories on the USAF Victory List, but wartime records list him with a total of five or six credits. He is the fourth-ranking Greek ace of WW2. During his combat tour, he flew mostly two specific Thunderbolts. The first was the P-47D-2-RE, 42-8081, 'HI-TOPPER, which was lost after ditching in Redscar Bay, during an escort mission for C-47s to Nadzab. Later he was assigned the P-47D-2-RE Thunderbolt, 42-22607, 'NAUGHTY NADINE' which he shared it with Squadron fellow ace, George Della. While serving with the 460th Fighter Squadron he flew the most advanced P-47D-23-RE which had reflector Mk.8 gunsight and the ability to carry bigger bomb load. It is not known if he had a specific Thunderbolt assigned to him with the 460th. After his tour expired he was rotated back to the United States where he helped to train new fighter pilots in Texas. At the end of the war, he was discharged but continued to serve in the USAF Reserves, with 30% disability for hearing loss from the war. Lolos worked for Westinghouse and later as an ordinance industry inspector based at Springfield Armory. He was a Quality Control Supervisor for the Department of Defense for 25 years retiring in 1972. He married a widow from his hometown, and they had one daughter, Joanne. Ironically, his first grandson was born on the day of his ditching off Redscar, and his second grandson shares the birthday of Neel Kearby. John Spiros Lolos, 97, passed away on March 1, 2016.

The first Thunderbolt assigned to John Lolos was the P-47D-2-RE, 42-8081, named "HI-TOPPER". Although it carries the typical USAAF camouflage, the tail was painted all white, a standard practice followed by USAAF in the Pacific Theatre of Operations. The fin tip was painted red to indicate the aircraft belonged to the 341st FS. The nose art shows a Top Hat painted in American flag colors with 'HI-TOPPER' written below it. 42-8081 was lost during a forced landing in the sea in Redscar Bay by the Greek American pilot, after his aircraft was engulfed in flames when he tested his guns. (Copyright Gaetan Marie)