John E. Panagiote was born on 23 March 1923 on the Greek Island of Samos in the Aegean. He was the son of Emanuel Panagiotou a Greek Orthodox rev. and Cleopatra Karagiane. Prior to 1934, the family immigrated to the United States and by 1935 they were living in Florida. John was actually the third USAAF member who was born in Greece and left as a youngster in the US like Steve Pisanos from Kolonos Athens and Arthur Sugas from Trikala. In the US he completed his education and entered the University of Louisville and after he graduated he was employed as a tabulating machine operator with the L. & N. Railroad. With the beginning of WW2, he enlisted in the United States Army Air Force in December 1942. After his training, he was sent overseas and joined the famous 56th Fighter Group well known as Zemke's Wolfpack in February 1945. He was attached to the 61st Fighter Squadron and he was the third Greek parentage pilot who flew and fought with the 56th FG along with Harry Coronios of the 62nd FS and Arthur Sugas of the 63rd FS, both original pilots of the Group and KIA unfortunately during 1943.

He entered combat on 9 March 1945 and flew 12 missions until 21 April 1945. Because he was an inexperienced pilot he usually flew as a tail end charlie in the No.4 position supporting his wingman. However, he was unlucky as he didn’t have the chance to participate in the 3 raids against the German Airfields of Muritz Lake (10/4) Oranienburg on 10 /4 and Eggebek on 13/4 where his squadron achieved multiple kills on the ground with almost every member gaining a ground kill. Especially during the 13/4 raid, he was forced to returned early back to his base, escorting Major Carter who was leading the squadron and had engine troubles on his HVC. That day he was his assigned wingman (Red 2). However newspapers during the war credited him with the destruction of several enemy locomotives, trucks, barges, and freight cars this isn’t confirmed from the available squadron records. For his actions, he was awarded the Air Medal. After the war he left the USAAF and on 14 Feb 1948 he married the Polish parentage Rosemary Piotrski and they had one daughter. John died at the age of 75. Unfortunately, our team wasn’t able to trace any of his relatives and retrieve further information moreover his Operational Military File was destroyed in the National Archives fire during the '70s.

Collage Above Right: John E. Panagiote poses inside the cockpit of a 61st FS Thunderbolt. His final resting place in Lebanon National Cemetery, KY, USA, along with a photograph of him during his training and along with his wife after the war follows clockwise. (Peter Randall & Nigel Julian, David Eschman)

Right  & Below Left: Damaged P-47M 44-21197, HV-O named 'Joy Boy' of the 56th Fighter Group after a mid-air collision on March 13th, 1945. In attempting wheels down landing on rough ground, the P-47 flipped over onto its back. Tragically both pilots involved, Lt. Luther Hines and Lt. Robert Tuttle were killed. Interestingly, 'Joy Boy' wasn't Luther Hines assigned aircraft, and the 'Joy Boy' artwork along with the intact engine cowling later appeared on P-47 44-21202, HV-P used by Panagiote on the 18 April 1945 mission. (Peter Randall & Nigel Julian)

Below Right: Out to grass. P-47M 44-21202 HV-P waits to be flown to the breakers in late August 1945. Code letters can just be discerned under the wing of Joy Boy. From mid. May 1945 code black on metal, was carried under the left wings of all 56th FG Thunderbolts. Noteworthy is that this photo was taken after the end of the war. Peter Randall wrote us that these codes were a post-war addition to discourage low flying and bothering people who had had enough of the war! The new M models also suffered a fair amount of teething troubles. The C series engines suffered from high-altitude ignition leaks and burned pistons. The 56th kept many of their older D models until the new M had its bugs corrected. Nonetheless, once sorted out, the P-47M was the fastest propeller-driven fighter to see combat service in any Air Force in the ETO. Capable of speeds up to 475 mph, the M was a true "hotrod". Performance of the P-47M-1-RE included a maximum speed of 400 mph at 10,000 feet, 453 mph at 25,000 feet, and 470 mph at 30,000 feet. The initial climb rate was 3500 feet per minute at 5000 feet and 2650 feet per minute at 20,000 feet. The range (clean) was 560 miles at 10,000 feet. The armament was six or eight 0.50-inch machine guns with 267 or 425 RPG. Weights were 10,432 pounds empty, 13,275 pounds normally loaded, and 15,500 pounds maximum. Dimensions were wingspan 40 feet 9 3/8 inches, length 36 feet 4 inches, height 14 feet 7 inches, and wing area 308 square feet. (Roger Freeman) 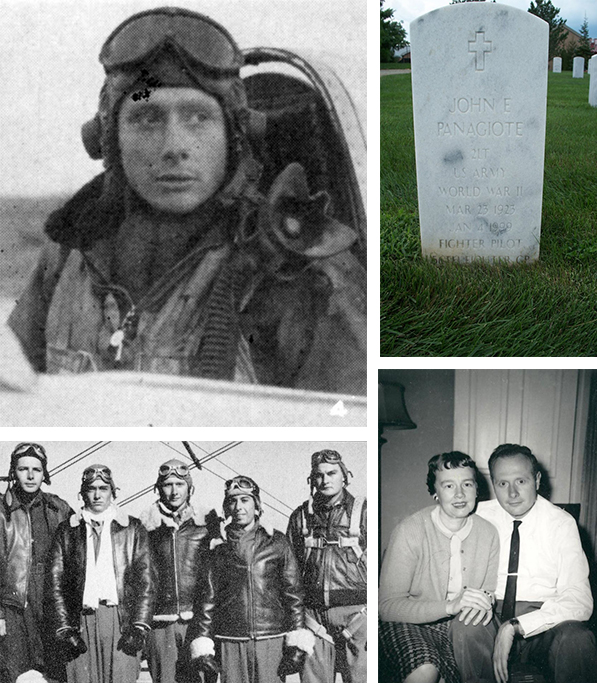 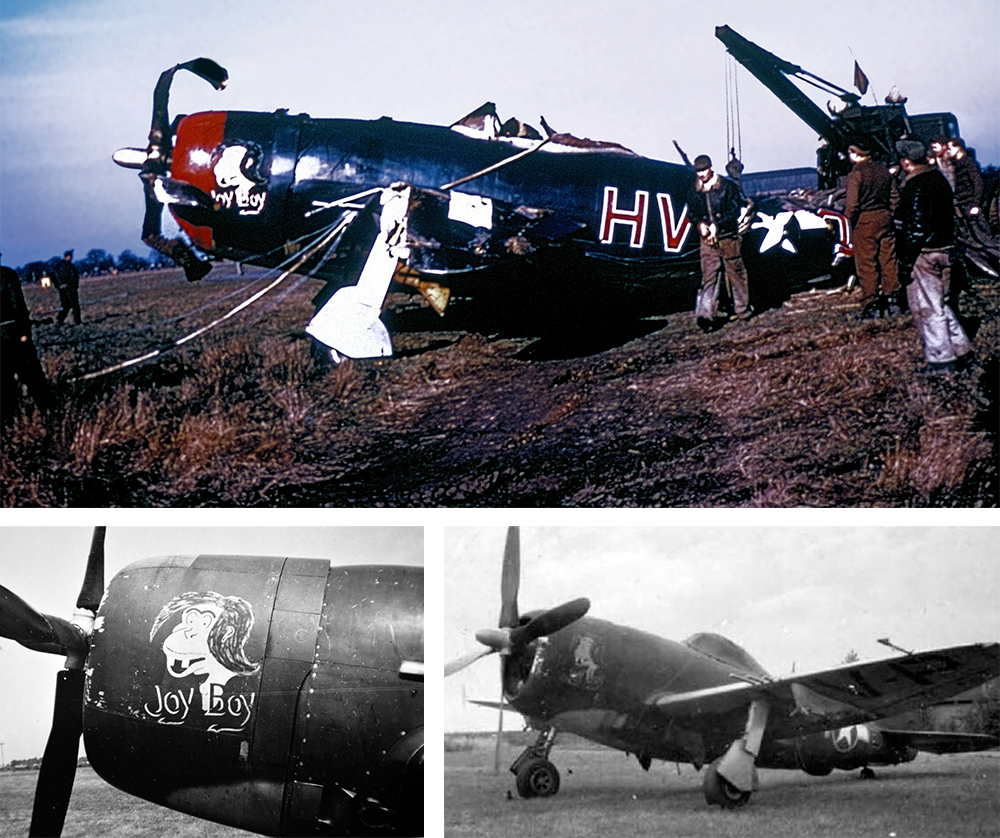 The 56th FG’s last Thunderbolts are famous for, more than anything else, their flamboyant painting schemes. The 61st FS opted for overall dark Midnight Blue with code letters and rudders in red. The P-47M, 44-02212 'Joy Boy' was flown by the Greek American pilot only once. He didn't have the chance to have an assigned fighter to himself and he usually flew whatever Thunderbolt was available including some which belonged to 61st Fighter Squadron aces Zemke’s Wolfpack ended the war the top-scoring U.S. fighter group of the 8th Air Force, with 665.5 recognized aerial kills—or one thousand aircraft destroyed, including those strafed on the ground. The P-47Ms, which served after the Luftwaffe was largely defeated, claimed only fifteen of those victories—though that included at least seven jet aircraft. Twelve P-47Ms were lost in accidents, and two were shot down by the ground fire, but no one fell in air-to-air combat. In recognition of the Wolfpack’s achievements, a P-47M was displayed under the Eiffel Tower for a victory celebration that July. (Copyright Gaetan Marie)