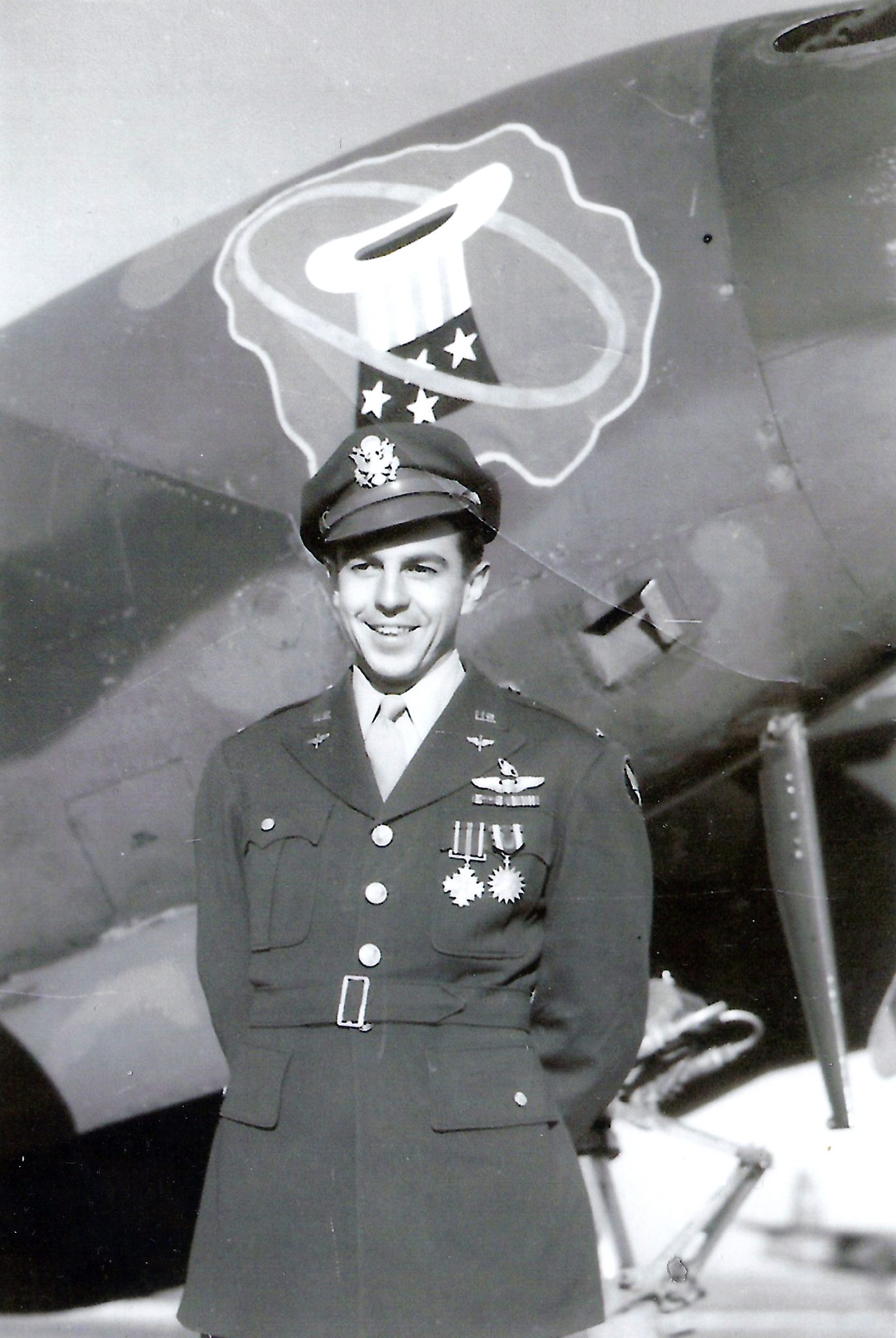 Robert Anton Vrilakas was born in Proberta, Calif., Oct. 28, 1918, to George Vrilakas (Vrilakis), of Rethymno, Crete, Greece, and May Topping, of Delevan, Wis. He attended Red Bluff Union High School and Sacramento Junior College. After graduation, the looming storm of WWII thrust him onto an unexpected course. He was drafted into the Army and soon found himself piloting the top fighter airplane of the time, the P-38 Lightning, in the famed 94th 'Hat in the Ring' Fighter Squadron of the 1st Fighter Group. He flew 51 missions in the Mediterranean Theater flying over North Africa, Italy, and France, as well as over Central Europe, specifically Austria and Germany. He destroyed two enemy fighters, one probably destroyed and three more damaged. He also destroyed one on the ground. While flying over Italy, JG 77 Knight’s Cross with Oak Leaves and Diamonds ace holder, Johannes Steinhoff's, aircraft, was slightly damaged by Vrilakas during a head to head confrontation, during Roberts return leg to his base, after the attack on the Foggia airfield in August 1943. Steinhoff claimed also 4 kills (159-162) on the returning Lightnings. He also saw action over Athens, Greece, stating that:

"I had relatives in Athens that I'd never met and it seemed strange to be part of a force to do damage there."

In Portland after the war, he met Jane Ann Good, and they were married on July 6, 1946. They would enjoy 68 years of marriage before Jane's passing in 2014. She and his family were the love of his life, but flying a P-38 came in a very close second, followed by a game of golf (he played his last game at age 97), and a dry martini. He made the Air Force a career after being recalled to service during the Korean Conflict. In 30 years of his career, he piloted many types of planes all over the world, and had tours of duty in Korea, Okinawa, Colorado, Germany, Delaware, California, Florida, Virginia, and Vietnam, flying P-51s and C-154s. He retired from service as a full colonel in 1973, by which time he had earned the Distinguished Flying Cross, two Presidential Unit Citations, nine Air Medals, three campaign ribbons, and two Bronze Stars. He settled in the Portland area (now Happy Valley). He opened a machine shop, Driveline Service of Portland, with his two sons in 1974. In 1980, he turned the successful business over to his sons. Never one who could be idle, when he retired from the Driveline shop, he wrote a critically and popularly acclaimed book, "Look, Mom, I Can Fly: Memoirs of a WWII P-38 Fighter Pilot". Before writing his book he already trusted his memoirs to the Greeks in Foreign Cockpits authors in order to be presented to the first volume of their research. Robert will always be remembered by Dimitris Vassilopoulos as he was the one who inspired him to write about Hellenic parentage pilots during WW2.

Vrilakas used this P-38G-15-LO, 43-2444 during some missions he flew while stationed in Foggia, Italy. It is the only plane of the Greek-American pilot which was photographed in flight. During 1944, this Lightning was transferred from the 94th FS to the 49th FS, 14th FG. On the 29th of July 1944, 43-2444 was destroyed during a forced landing with Lt. Daniel Haley at the controls, after one of his engines quit over Triolo, Italy. Robert Vrilakas also flew P-38H-5-LO Lightnings on operations while he was stationed in Foggia, Italy. The P-38H (Model 222-81-20) differed from earlier versions in being powered by 1425-hp Allison V-1710-89/91 engines. The P-38H was fitted with automatic oil radiator flaps in order to solve a chronic engine overheating problem and enable military power above 25,000 feet to be increased from 1150 to 1240 hp. An M-2C cannon took the place of the M-1, and the bomb capacity for each underwing rack was raised to 1.600 pounds. (Copyright Gaetan Marie)