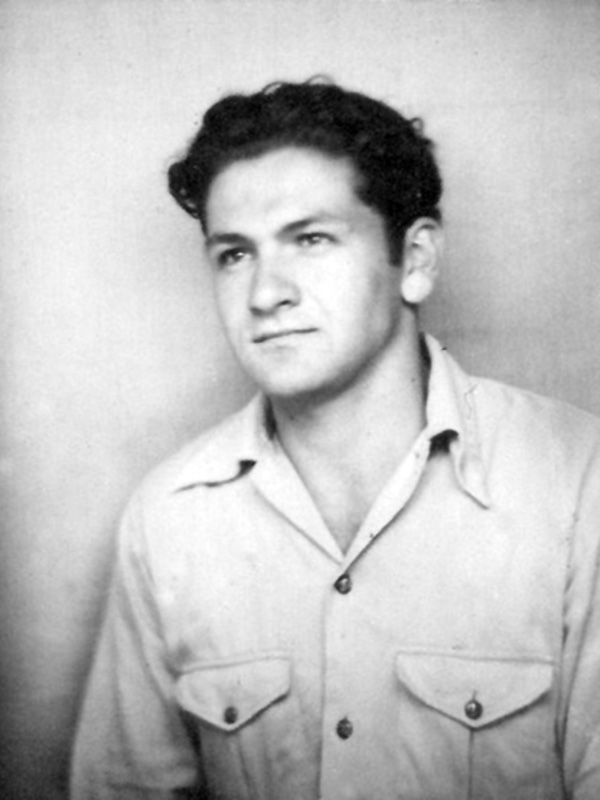 Sabe Legatos was born on May 8, 1922, son o Gerasimos Legatos and Vera Marketos with heritage from Kefalonia Island. The couple had six children, three of whom were born in Greece (Nick, Fred, and Jessie) and three more in the United States (Teresha, Sabe and Georgia). As a young man, Sabe was very popular among his friends and also he was a great athlete and except English, he could speak also Greek and fair Spanish. With the outbreak of WW2, he joined the CTPT program while attending the Teachers College, however, he already volunteered for RAF receiving a negative answer! He pursued his dream to fly by making a request in USAAF, encouraged by his brother in law Clair Loren Taylor who had already enlisted. For reasons unknown he submitted a request in the US Navy and was accepted for flight training gaining his Wings of Gold on. He was ordered to present himself in Composite Squadron 68 flying with the advanced Wildcats, namely the FM-2s. The squadron boarded the escort carrier USS Fanshaw Bay (CVE-70) and between April and May 1944, it flew cover for the convoys between Pearl Harbor and the Marshall Islands. The next deployment came when the Funny Bee deployed to support the Marianas Campaign with Sabe seeing considerable action.

The star of the Greek American pilot rose during the Battle of the Leyte Gulf in October 1944 where he was able to shot down to enemy planes and hit the enemy fleet ships with his guns. For his gallantry in action, he was awarded the DFC. The ferocious battle given by the TF.74.3 carriers earned the Fanshaw Bay and her Air Group the Presidential Unit Citation. However, the fighting spirit of the young and aggressive pilot couldn't find peace and he wanted to be transferred to a Fleet Carrier squadron and participate in further battles. His wish came true and he was soon transferred to VF-12 which was ready to be deployed with USS Randolph for a campaign against the Japanese Islands. Sabe was loved by his CO and squadronmates and he was one of the most experienced pilots. Furthermore, he was now flying with the best fighter the USN had the famous F6F Hellcat, well known as the Ace Maker. Legatos was destined to be an ace but his fate was sealed. During the first mission of Carrier Wing 12, he took off from USS Randolph flying the F6F-5 Bu.No.71794 and headed for a strike against Mawatari and Mito South airfield. During his attack, he destroyed two planes on the ground with his rocket. While taking evasive maneuvers he was placed behind to Ki-43 Oscars which took off to intercept the American raiders. Legatos fired at the Wingman Κingi Yokojama and shot him down with a long burst. His leader Yoshinori Matsunaga, turned quickly his agile fighter and attacked Legatos almost head-on firing all the way with Sabe firing also. The two fighters and their pilots were mortally wounded and both crashed on the ground. His race to acedome stopped at 4 kills and two on the ground and a great pilot was lost. For his valiant final flight and fight, he received posthumously the Silver Star and the Purple Heart.

During 2018 a combined effort between the team of Greeks in Foreign Cockpits, the Japanese researcher Kenji Sudo and the US Government set the goal to identify the brave Greek American pilot remains and bring him back to his home in Sacramento. May his memory and his brave Japanese pilots are eternal and their sacrifice always reminds us not to fall again in dark times.

Sabe Legatos fighter during his first and last mission with the FIGHTING 12 was the famous F6F-5 Hellcat. While at his controls he was able to shot down two Japanese Army Air Force fighters and destroy to more on the ground. The fighter carries six HAVR 5'' rockets and an external fuel tank, representing the loadout during Sabe's last mission. Altough the Bu.No. is correct the Hellcat identification number (#31) is fictional as it is not known yet, because of luck of records. The Grumman F6F Hellcat formed the backbone of America’s carrier-based fighter force as the Allies pressed the war toward Japan. Powered by a massive and reliable Pratt & Whitney radial engine, the Hellcat racked up an incredible 19:1 kill ratio against its foes in WWII, and 305 aviators earned ace status while flying the Hellcat. Such famed US naval aces as David McCampbell, Cecil Harris, Eugene Valencia, and Alex Vraciu all flew the Hellcat. In addition to its wing-mounted .50-caliber machine guns, the F6F was equipped to carry bombs as well, allowing pilots to deliver up to 2,000 pounds of bombs on targets. By the time that Hellcat production ended in November 1945, 12,275 examples had rolled off Grumman’s Bethpage, Long Island, assembly line. (Copyright Gaetan Marie further info via Schiffer Publishing and David Doyle)