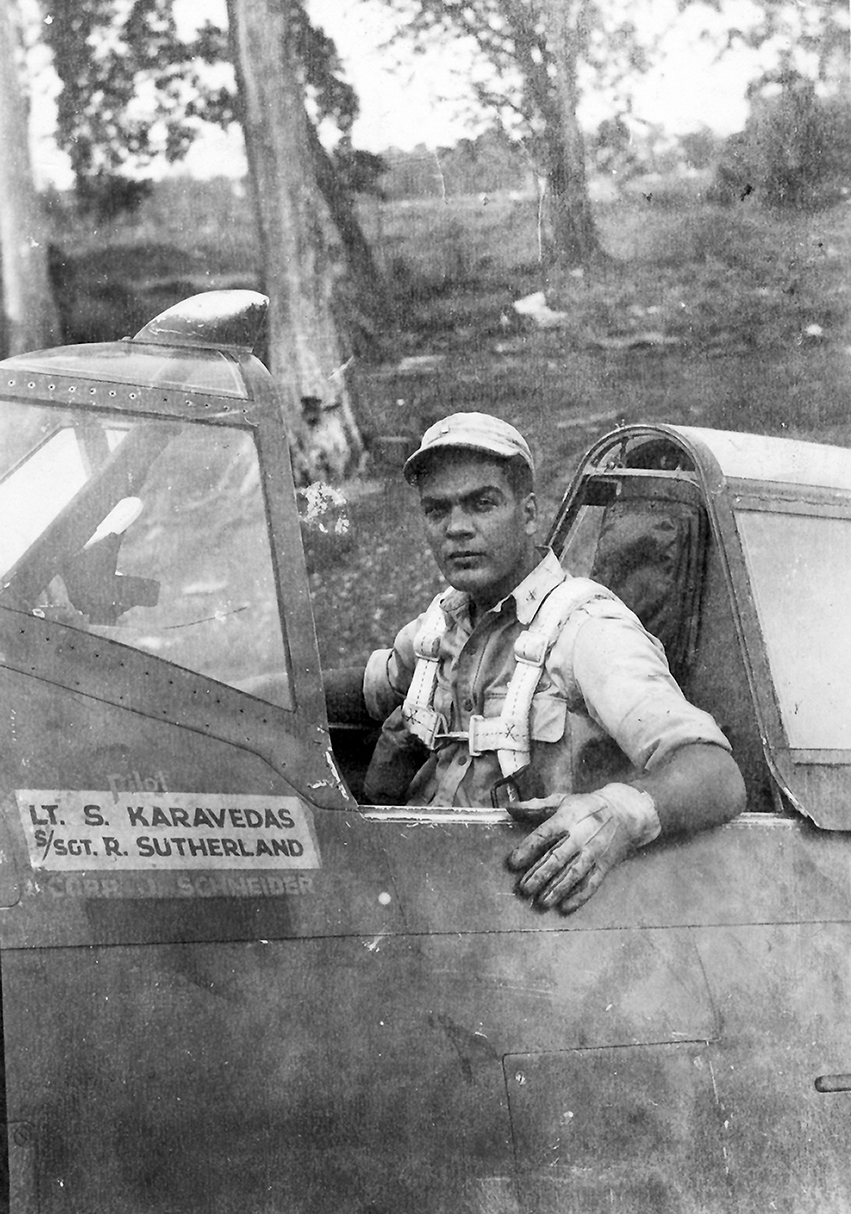 Lt. Spiros Karavedas pose inside the cockpit of his P-47D Thunderbolt. 'Spike' as it was his nickname flew numerous missions in the SWP supporting the Mc.Arthurs troops to clear Japanese garrisons, and come one step closer to the Philippines Islands.  (Greeksinforeigncockpits via Frank Emmet)

Spiros Karavedas was born on August 5, 1921, in Salem, MA. He was the son of George Karavedas and Olga Hatzopoulos, both Greek parents. His father was from Varvasaina village in Peloponnese, few kilometers outside Pyrgos, in Ilia district. The couple had also six more children and during the middle 20’s the large family moved to the nearby Peabody where Spiros grew up. During his college years he attended the CPTP program and when the U.S. was attacked by the Imperial Japan, 'Spike' as he was his nickname, joined the Army Air Corps. He graduated from 43-D class and joined the 58th Fighter Group in Bedford airfield in MA, flying the famous P-47 Thunderbolt fighter. In the 1940s, there was a mystery pilot who would fly his P-47 plane over Walnut Street in Peabody. It was alleged that 'Spike' was the mystery pilot and waggled his wings so his mother knew it was he. After his training, he was attached for a short time to 69th Fighter Squadron and then to the 310th Fighter Squadron. He was posted along with the rest of his Group to the SWP Theater of Operations. He flew 108 combat missions, providing air support for the soldiers who were on the ground fighting an entrenched enemy. He strafed and bombed land targets, ships, enemy ground positions, railway stations and moving trains carrying supplies to be used against our soldiers. These soldiers were island hopping through the Philippine Islands, and he flew at the enemy, dodging their intense firepower. He lost several of his wingmen during these missions but never forgot them. He was proud of his Hellenic heritage, that's why in his personal P-47D-16-RE, 42-276047, (H36), he draw a nose art showing a Greek evzone (soldier) yelling 'Aera', the war yell of the Greeks which was used during the Greek-Italian War in Northern Epirus front in 1940-41. The name of the Thunderbolt was 'GREEK GUERILLA' although in the other side his mechanic wrote the name of his girlfriend 'GLADDYS'. When Spike returned to the North Shore area, he became a member of the Massachusetts National Guard and flew F-84 jet fighters until he resigned his commission as captain. With his history of flying in combat facing the terrible odds of enemy ground fire, Spike came to the realization that life and the relationships that are developed are what really matter and the rest may not be so important. He grew up in Peabody, went off to war, returned home and started a business called "Spartan Realty" that was located in Peabody and Danvers. Over the years, he was very active in the community. He married his sweetheart, Carol, and they had two daughters. Spike was a member of the Greatest Generation. He was awarded the Air Medal with an Oak Leaf Cluster, the Army Air Corps medal and other campaign medals and ribbons for the theaters of the war he fought in. Spiros Karavedas passed into eternity on March 25, the Greek Independence Day anniversary after a short illness. A true Greek hero, like those who liberated their people from Ottoman slavery, during the Hellenic Revolution of 1821.

'Spikes' personal Thunderbolt was the P-47D-16-RE, 42-276047 (H36), 'THE GREEK GUERILLA' or 'GLADYS'. Like Lolos aircraft, it was painted with olive drab on the upper surfaces and neutral gray at lower surfaces with the all-white tail used in the Pacific Theater of Operations. Also the wing leading edges were painted white while the yellow cowling denoted that the Thunderbolt was part of the 310th Fighter Squadron. The cowling flaps were painted half yellow and half natural aluminium, a standard practice on aircraft of the 310th FS’s Yellow flight. The side code was H36 (squadron numbers ran from H33 to H66) and the nose art depicting a Greek guerilla yelling 'Aera' was painted in reference to Karavedas Hellenic parentage. The 'Gladys' name was painted by Karavedas crew chief. (Copyright Gaetan Marie)