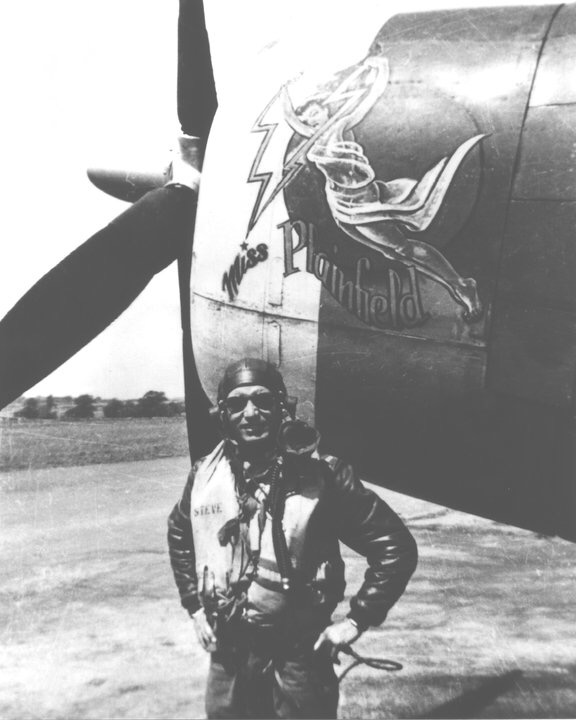 Spiros Pisanos, standing proudly in full flight gear, in front of his P-47D-1-RE, 42-7945, QP-D, named as 'Miss Plainfield'. He flew 56 mission at her controls before the 4th Fighter Group re-equipped with the P-51B Mustangs. He managed to fly only five missions with the famous escort fighter before he bailed out from his stricken P-51B, 43-6798, QP-D, having achieved 3 kills that day. Its rumored that the Mustang was also named as 'Miss Plainfield' but no photographic records are on authors knowledge.(Greeksinforeigncockpits via Spiros Pisanos)

Spiros Nicholas Pisanos was born in Kolonos area in Athens on November 10, 1919. He wanted to fly from the time he saw for the first time a Royal Hellenic Air Force (RHAF) Gloster Mars fighter flying above him. Because of his poor economics and education, he wasn’t able to be accepted in RHAF academy so he decided to emmigrated in the United States. When young Pisanos arrived in the U.S. in 1938, he worked, studied English, and learned to fly. He earned a private pilotʼs license in 1941, and soon after Germany invaded Greece, he volunteered for the embattled British Royal Air Force. He served with the RAF No. 268 Squadron flying Mustangs Mk.I and later with No. 71 ‘Eagle´Squadron flying the famous Spitfire. No. 71 Eagle Squadron was one of three Eagle squadrons comprised of U.S. volunteers which later absorbed within the USAAF, becoming the 4th FG. In 1942, he became a naturalized U.S. citizen while in London, England. He was the first individual in American history to become a citizen while outside the U.S. border, and his becoming a citizen allowed him to be commissioned a second lieutenant in the U.S. Army Air Forces. Renamed as the 334th FS the former No.71 Squadron required with the massive Thunderbolt fighter. He soon assigned a personal P-47 which he named it as Miss Plainfield, in which he scored his first aerial victory on May 21, 1943. By January 1, 1944, he had become an ace. After his tenth confirmed kill, he crash-landed his P-51 in France and spent six months with the French Resistance, successfully evading capture. Because of his exposure to the French operations, the Air Force could not risk his capture again, so he returned to the U.S. and became a test pilot at Wright Field where he also attended the Air Forceʼs test pilot school. After a short break from the USAF, he flew with the TWA but he came back after his best man and friend from the Eagles Squadron and 4th FG, Don Gentile's encouragement. He was appointed to several positions in the Mediterranean area before he was posted to Air Defence Command flying with F-102 and F-106. He returned to Europe serving in various USAFE bases and visited Greece many times. He was eager to fly the F-4 Phantom in Vietnam War although he was sent to 457th Tactical Air Lift Squadron, flying transport missions all over the front, facing the heavy anti-aircraft fire. During 1970-73 he was also appointed as a JUSMAG (Joint Military Aid in Greece) senior officer and he had a pivotal role in HAF F-4E acquirement. For his actions, he was awarded numerous DFCs, Air Medals, Croix de Guerrero, British Star, the French Foreigners Legion Medal of Honor etc. He wrote his memoirs in an excellent book entitled as “THE FLYING GREEK - An immigrant fighter Ace’s WWII Odyssey with RAF, USAAF and French Resistance. Steve passed away peacefully οn June 6, 2016, and was the second-ranking Greek ace with 10 victories and 2 damaged enemy airplanes.

The Greek ace and Eagle Squadrons veteran Spiros Pisanos flew this P-47D-1-RE (serial number 42-7945, QP-D) named "Miss Plainfield" as his personal fighter. In Gory Graff’s book "P-47 Thunderbolt at War" Pisanos remembers how he decided to make the nose art: "When I was assigned my own P-47 (QP-D), my crew chief, Sgt. Paul Fox, said to me one day, Lieutenant, aren't we going to paint something on the cowling of our Jug? Your friend has already painted Miss Dallas on his Jug and it looks really good. Ι decided to name my P-47 'Miss Plainfield' for a girl from that city who had started to send me letters, praising me for being in the war from Plainfield, as the local newspaper continued to write articles about my activities while I was overseas. I never met this young lady." (Copyright Gaetan Marie)