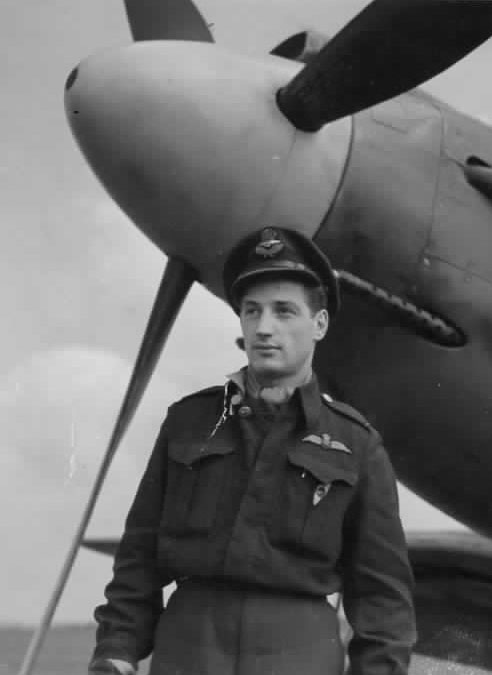 Theodore Lambros in front of a No. 239 or No. 430 Squadron Mustang Mk.I. Clearly visible are the two 0.50-inch machine guns mounted under the engine cowling, firing through the propeller. Each wing contained two 0.30-inch machine guns and one 0.50-inch machine gun, arranged with the heavier caliber gun between and below the two .30s. Although the primary role of the Mustang Mk.I units were tactical recon, the RAF realized that it had a powerful fighter able to conduct raids and inflict damage to the Germans in France. Thus 'Rhubarbs' became their second role until D-Day when Mustangs necessarily reverted to just the tactical reconnaissance role. ‘Dan’ flew quite a few 'Rhubarbs' while flying with both RAF and RCAF squadrons. (Lambros Family)

Theodore Lambros was born in Collingwood, Canada in 1915 the son of a Greek immigrant family. His parents were Peter Lambrinos (who shortened his name to Lambros) from Goranoi village, south of Sparta, and his mother Panagiota (Pota) Vorvis also from Laconia district. Theodore had also three sisters and one brother, who also became a pilot with RCAF in WW2. His first contact with aviation was through an airshow in Bowmanville as well as the movie 'WINGS'. In June 1940 the war was in full scale and Ted managed to enter RCAF in order to be trained as a pilot where he obtained his nickname ‘Dan’ which companied him for his whole life. He was trained in No. 3 E.F.T.S. and later to the No. 31 S.F.T.S. and he gained his wings, waiting to be posted in an OTU and trained in fighters. Nevertheless, he was appointed to the No. 9 S.F.T.S and later to No. 1 S.F.T.S in Camp Borden as an instructor, gaining valuable flying time and experience. During this time he applied to be transferred to a fighter unit and in November 1942 he was posted to No.1 OTU for operational training on Hawker Hurricanes. Ending his training he crossed the Atlantic and went to No. 41 OTU in order to be familiar with the North American Mustang Mk.I and to be trained in the fighter-reconnaissance missions. Although an RCAF officer he was sent to Fairlop, Essex, to join RAF No. 239 Squadron, where he flew 6 operational missions before the unit disbanded. During his service with the No. 239 he flew his first personal Mustang Mk.I, AG560, named 'Patricia', after his fiancée and later his wife name, Patricia Thurlow. He was then posted to the No. 430 (RCAF) Squadron were he flew mostly recon missions over Normandy and France, before and after D-Day. This kind of missions was very demanding requiring exceptional flying and navigational skills, as well as very dangerous not only because of the enemy action but due to weather also. One of his most memorable missions was flown on August 2, 1944, when he found and photographed a large group of sixty German Panzers which were on their way to engage Allied forces. His photos resulted in the immediate dispatch of a squadron of Typhoon anti-tank aircraft and the destruction of an entire Panzer regiment in one afternoon. Although he flew again a highly successful mission, revealing more German armored reinforcements a few days later, he didn’t award the DFC as everyone expected, because of his differences with his Squadron Leader, Flt. Lt. Chesters. It must be noted that while flying with the No.430 Squadron he also had a personal Mustang Mk.I, specifically the 'W'/AM125 which was also named 'Patricia' after his wife. During his service in ETO, he also served as a FAC attached to ground units (like William S. Manos did for the Americans) and as a member of the famous 'RAFwaffe' flying dissimilar engagements against other allied units in England. On September 21, 1944, he retired from RCAF and returned to his civilian life in Canada where he worked in his family restaurant in Wiarton and later his own in Huntsville. However, his love about flying pushed him once more in RCAF and the jet age. With the Cold War at its peaks, he served with No. 441 Squadron flying CL-13 Sabres from Marville, France. He left RCAF in 1967 and worked for the ministry of immigration, especially for Greek immigrant’s matters because of his heritage and knowledge of Greek language. He passed away on June 12, 2004, aging 83 years old, after a short fight with cancer.

Mustang Mk.I AM125 was Theodore Lambros’ second fighter, also named ‘Patricia’ after his beloved wife, while serving with No. 430 Squadron RCAF. It wears the standard RAF, 2nd TAF camouflage and, like the previous No. 239 Mustang Mk.Is, it is also fitted with an F24 oblique camera behind the pilot’s seat. Because of the Normandy landings, the Black and White identification stripes are also applied aft of the belly scoop, but not entirely around the fuselage or wings. It’s not known if the stripes were applied like this from the first day of the invasion or their coverage decreased after a few months as with other RAF and USAAF fighters. There is no photograph of a No. 430 Squadron aircraft wearing full D-Day markings on its wings and fuselage. Lambros flew twenty combat sorties in 'Patricia' before it went unserviceable while flown by Flt/Lt H.W. Russell on October 9, 1944. (Copyright Gaetan Marie)