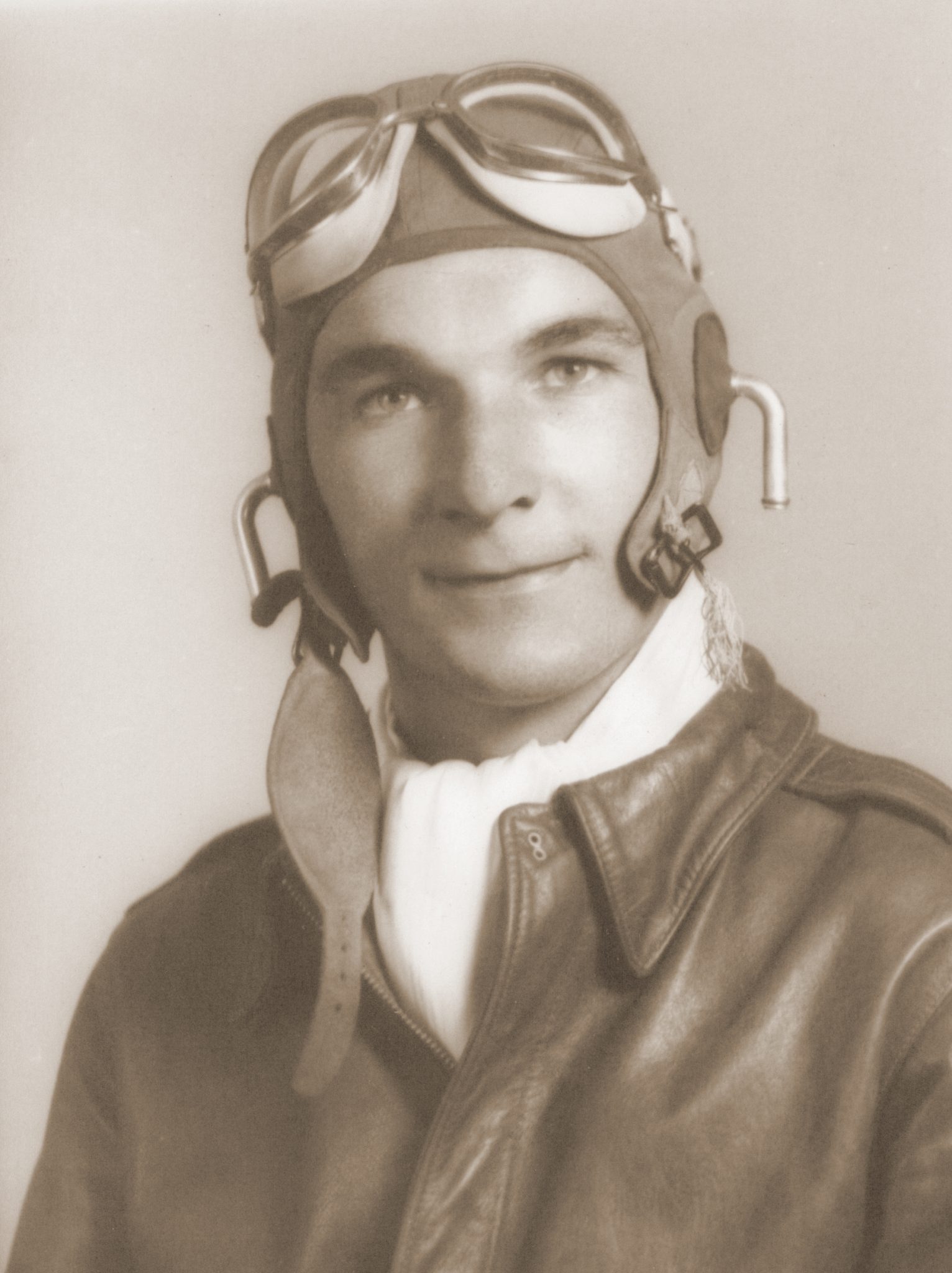 William Manos pose proudly wearing his flight gear, during his basic training in Ontario, California. After completing his flight training on PT-17 Stearmans, BT-13 Valliants, AT-6 Texans and P-40 Warhawks he was posted to the 497th FS, in January 1944, which was an OTU based on Harding Field. The unit used the massive P-47 Thunderbolt and Manos remembered his first sight of the Republic fighter: “It won’t fly, it’s too big and heavy. The first thirty hours it was like flying a big building. Αfter about forty hours we all agreed it was the finest airplane we ever flew.” (Greeksinforeigncockpits via Bill Manos III)

William Stanley Manos was born in Portland, Oregon on January 21, 1923. His father Basilios Manolis was from a village named Roeino, in Arcadia District and came to the United States in 1918, where he shortened his changed his name to William Bill Manos. He married his sweetheart and had two children, Doris and William. Bill always think of Greece and he used to tell stories to his children about his days in his village. William finished his school studies and worked at the family restaurant as well as a Clark driver in Iron Fireman MFG. When WW2 broke out he applied for the USAAF and he was accepted, reporting to Santa Anna, California in February 1943. Completing his training the young 2nd Lt was posted to the 497th Fighter Squadron in order to proceed to his operational training on P-47 Thunderbolts. Having logged 300 flying hours (90 in fighters) he was transferred to the 9th Air Force and posted to the 406th FG and specifically in the 513th Fighter Squadron. William flew his first missions some days before the operation Overlord and took part in 4 missions during the D-Day and the days following the invasion. Except for the ground support missions for the invading allied armies he also flew many Nobel missions as well as airfield attacks. On August 2, 1944, he was shot down near Granville area after an attack on Rennes airfield but he managed to bail out from his damaged Razorback P-47 unhurt and evades capture. After some days in the 15th evacuation hospital, he returned to his squadron, and resume flying in his new bubble top Thunderbolt which named it as The Raider. He participated in a two month Forward Air Controler Program and he was attached to various ground units, guiding allied fighters onto its targets. After he returned to his squadron he was given his own flight and began flying ground support missions over North West Europe and Germany. Until the end of the war, he was credited with one probable Fw190 kill as well as damaged Ar234! For his actions, while flying in support of the ground troops storming Europe he was awarded the Distinguished Flying Cross and the Air Medal with 6 Oak Leaf Clusters. After William returned to the United States he became a P-51 instructor in Luke airfield and he left USAAF On January 5, 1947. He involved with the Unions and later started his own business on Labor Relations with his wife Cleta. In the 70s he applied for the position of Federal Arbitrator of Federal Mediation and Conciliation Service and appointed for service in 1972. He completed 23 years of service and two of his decisions published Nationally. He also started a human resources company along with his children Bill Jr and Debbie which named it as The 3Gs (3 Greeks)! William Manos passed away on May 3, 2011, being a raw model of a very talented and successful pilot and businessman.

Ending his service as a FAC, William returned to the 513th FS flying support missions for Patton’s Third Army. According to his son Bill, 44-33547 was the P-47D-25-RE Thunderbolt his father frequently flew. He possibly flew whatever fighter was available since he may not have had another personal aircraft. Although in a metal finish, it still carries the distinctive red markings of 513th FS, 406th FG Thunderbolts, as well as the painted anti-glare surfaces forward and behind the bubble canopy. (Copyright Gaetan Marie)