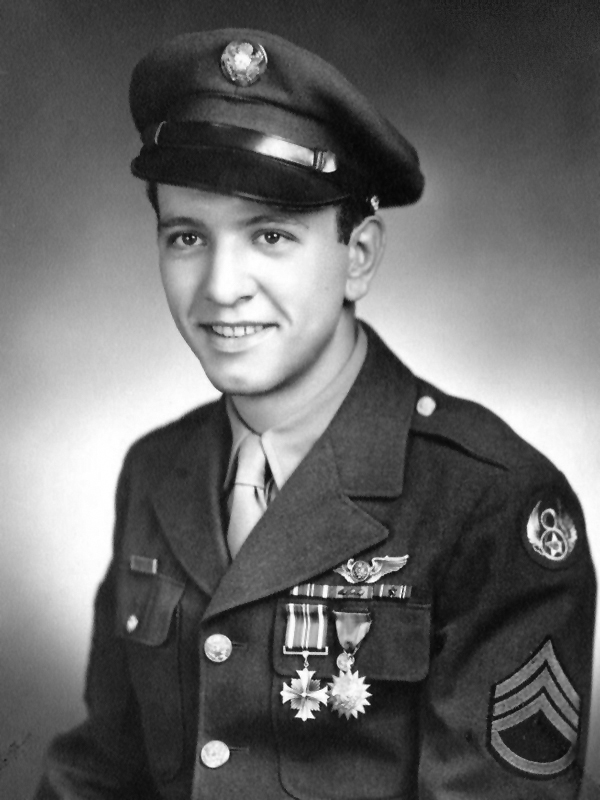 James Pitas in an official portrait after his tour of duty in Europe wearing all his awards, between them the Distinguished Flying Cross and the Air Medal with 3 Oak Leaf Clusters. (Michelle Holt) 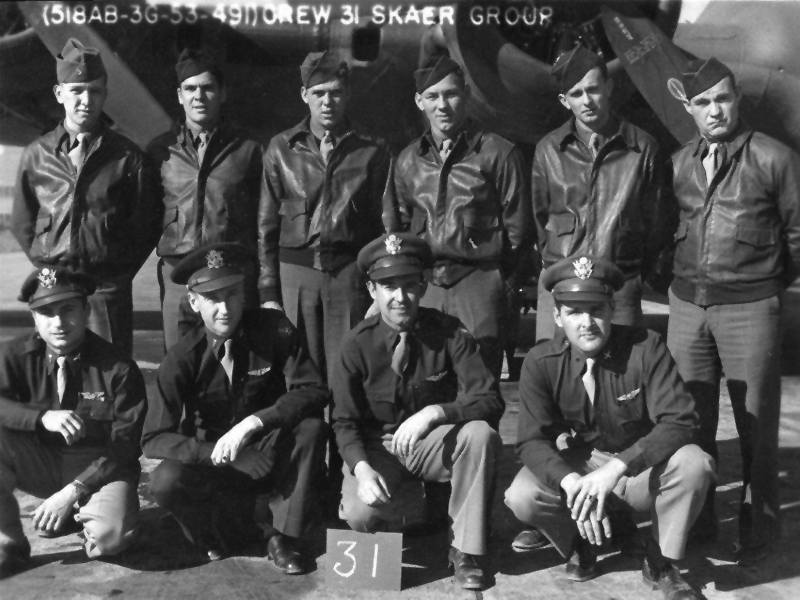 Jim was the first born son of John D. Pitas (a Greek Immigrant) and Eva Collins Pitas (the daughter of a lumberjack). He was born on November 22, 1924, and raised in Fond du Lac, Wisconsin and graduated from Fond du Lac Senior High School. His father, John James Pitas, emigrated from Samos. John joined the US Army at age 14 (lied about his age as many did) so he could gain US citizenship. John came to the US with two brothers who were both older than him. One stayed on the east coast and I'm not sure where the other one settled. John came to Fond du Lac by himself as a teenage boy knowing zero English. He settled in with the Greek community in town. Became a barber and then, later on, became a manager at a leather tannery. John married a German/English woman, Eva Collins, and did not raise James or his other 2 children, Arthur & Elain, with any Greek tradition as the time, Greeks were discriminated against in this area (Greeks were also victims of KKK - Ku Klux Klan). Jim enlisted in the Army Air Corp on December 7, 1942, in Milwaukee, Wisconsin (#16156189). He trained in Aircraft Armament at Lowry Field, Colorado and Aerial Gunnery at Wendover Field, Utah. However, before his training, he was examined by a committee in order to be an aviation cadet and proceed for flight training, unfortunately without success. His failure to meet the prescribed standards for pilot training didn’t stop him. He joined his B-17 flight crew at Ephrata, Washington. Since he was the last to arrive, he got the ball turret position. The pilot was John Ferguson. They trained for several months at Ephrata, Washington and Geiger Field near Spokane, Washington. On October 26, 1943, they ferried a new B-17 from Grand Island, Nebraska to Edinburgh, Scotland. From there the crew was assigned to the 410 Squadron of the 94th Bomber Group of the 8th Air Force. They were the third crew to fly B-17F-35-VE, #42-5950, ‘Peter’s Pride’ or ‘My Devotion’. The plane was named after the crew chief. After 17 missions, Jim’s crew took R&R at the country estate of a wealthy Englishman. They stayed in a mansion by the Thames and were served by the owner’s staff. When the crew returned from R&R, they found that their plane and replacement crew had been shot down with no survivors. Jim participated in three attacks on Berlin but never got there. On the first attack, the group was forced to turn back while over Switzerland because of worsening weather in England. On the second try, they turned back over Sweden because their contrails were too heavy. On the third try, his bomber was forced back just short of the continent by engine failure. However, the 94th led the January 11, 1944 attack on the ball bearing works at Brunswick, Germany. One-third of the group was lost in the attack. They received a Distinguished Unit Citation for their efforts. Although he was a member of Ferguson crew, his seven last missions were flown with Millers and Harpootlian Crews. During his tour, Jim was awarded the Distinguished Flying Cross, the Air Medal, four Oak Leaf Clusters, and the European Theatre of Operation Ribbon with one Battle Star. He also earned a Purple Heart. According to Rebecca 'Mayer' Alm, granddaughter of Capt. William Henry Mayer, James co-pilot and one of his longtime friends:

"Heated items had copper wires running through it and needed to be plugged into their duty station in the plane. Many times there were malfunctioning pieces as in when belly gunner Pitas gear had a short and did not heat one side of his body but used the same amount of power and burnt the other half. He received a Purple Heart for his suffering."

Jim was asked once how many fighters he had shot down. He said, “I never kept a count. Killing other people is not something I’m proud of.” After the war, Jim married Della Mae Howell and became a tool design engineer at Giddings & Lewis in Fond du Lac. Jim and Della were married for 55 years, they had three daughters and six grandchildren. Jim worked at G&L for 33 years. He was a long time member of the EAA and the B-17 society and donated plenty of his wartime memorabilia’s, like his jacket. James D. Pitas, pass away in 2001. 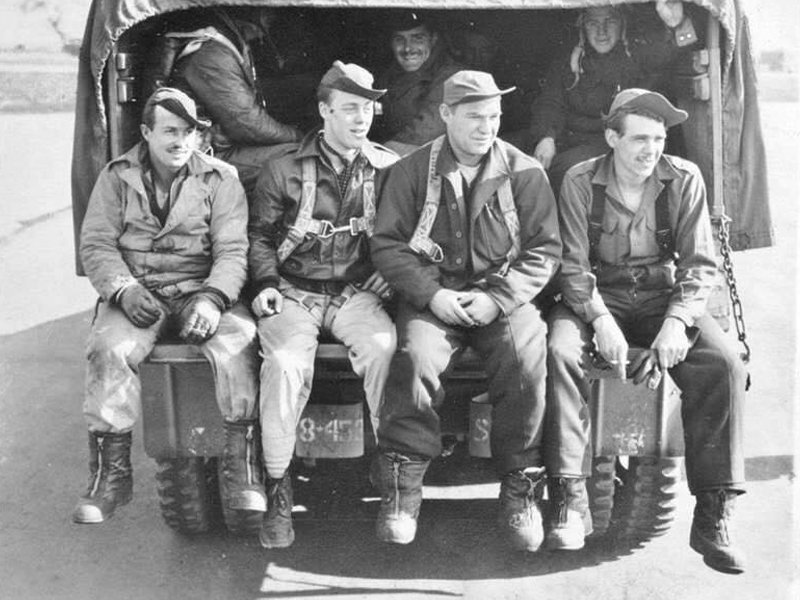 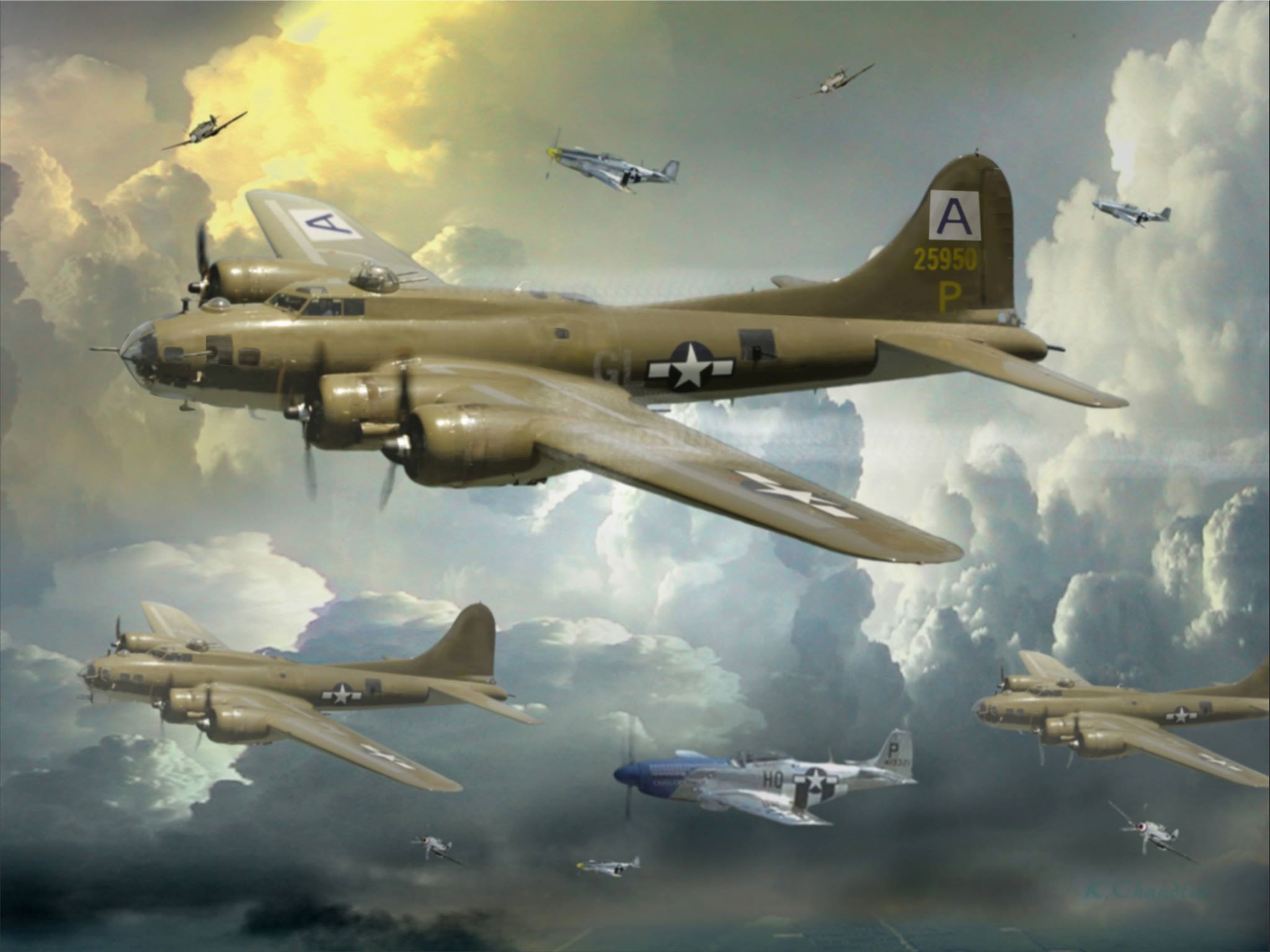 The B-17F assigned to the Ferguson/Mayer Crew in December of 1943 was named ‘Peters Pride’ serial 42-5950. It was one of the 72 first Flying Fortresses at Bury St. Edmond's. In January 1944 'Peters Pride' was upgraded with the 'G' modiﬁcations and would take a beating with them on every mission. The plane was said to be named by the crew chief. About 40% of the B-17s ﬂown in the war were not named and had no art. She was originally named 'My Devotion' it was painted darkly on the nose but when it was given to a new crew it was renamed. Many Commanders only allowed art to be temporarily applied for photo shoots but it had to be removed by the next morning. The Army was very strict about photographing during the war so many planes were never ' photographed but the painting and the color painting is what she looked like. According to B-17 Master Log by Dave Osbourne about the 42-5950: Delivered Long Beach 28/5/43; Cheyenne 1/6/43; Dow 7/7/43; Assigned 410BS/94BG [GL-P] Rougham 12/7/43 MY DEVOTION; Missing in Action Berlin 8/3/44 with Bill Babington, Co-pilot: Horbey Overton, Navigator: Nick Papernek, Bombardier: Bill Davis, Flight engineer/top turret gunner: Roy Hatcher, Radio Operator: Mike RiveraWounded in Action, Ball turret gunner: Billy IvyWounded in Action, Waist Gunner: Rod Shogren, Waist Gunner: Allen Kanges,Tail gunner: John Liberg (10 Prisoner of War); enemy aircraft set tail on fire, crash-landed Wieste, 17 miles W of Cloppenburg, Ger. Missing Air Crew Report 2997 (Copyright Gaetan Marie, further info and 'Peter's Pride' painting above right by Rebecca Mayer Alm) 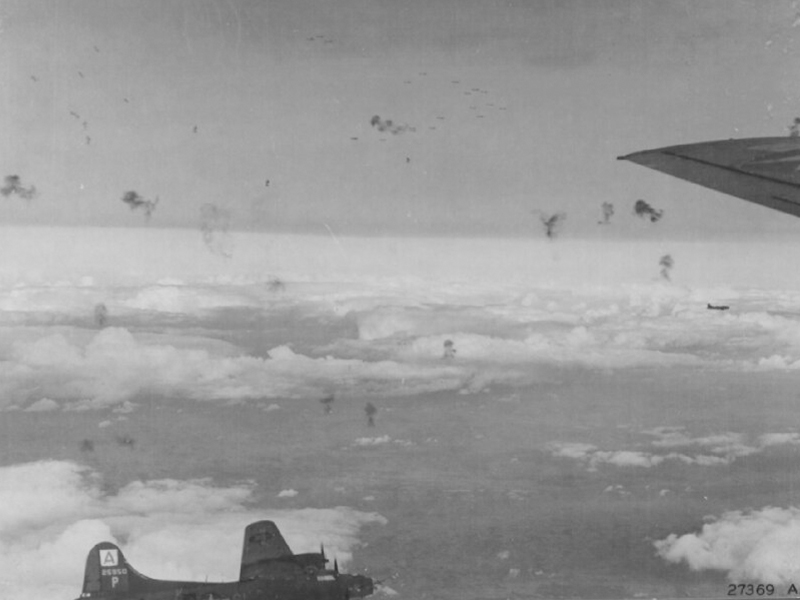 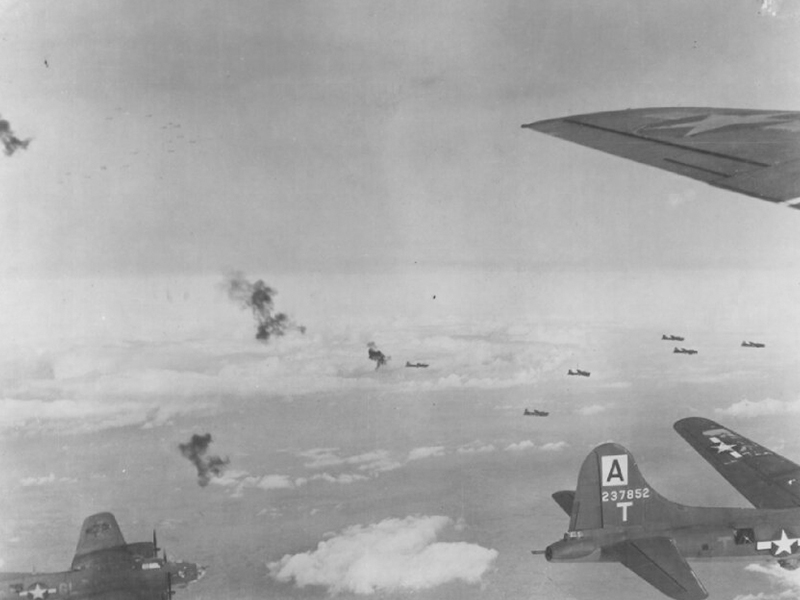 FLAK OVER MUNSTER - A heavy defense throws up by the Nazi around the important railway marshaling yards and repair shops at Munster. Vital rail junction which handles heavy traffic to and from the industrial Ruhr. Despite this heavy defense, Eighth Air Force Flying Fortresses flowed through flak-filled skies to successfully attack their target on November eleventh, devastating the vital rail center. With their fighter escort, these powerful Fortresses accounted for the destruction of 18 enemy aircraft while completing one of the wars most crippling blows against Nazi Germany (National Archives 27369AC & 26719 AC) 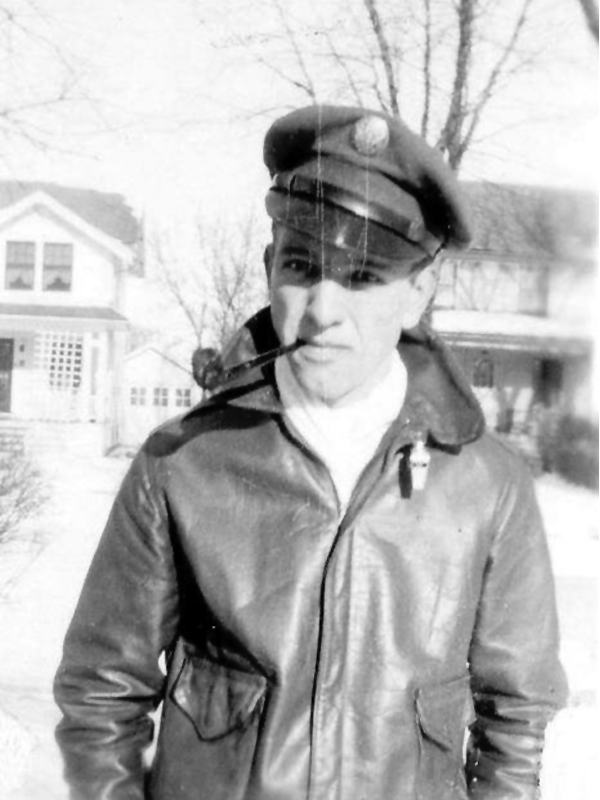 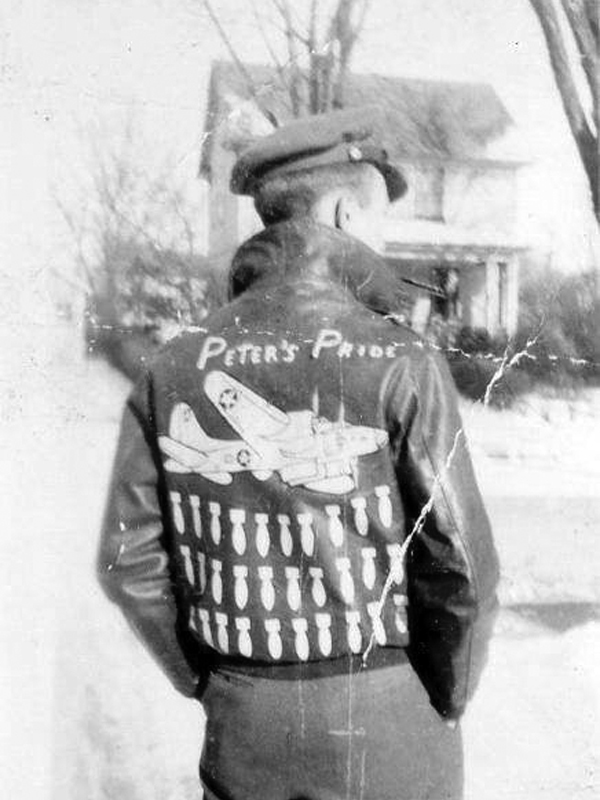 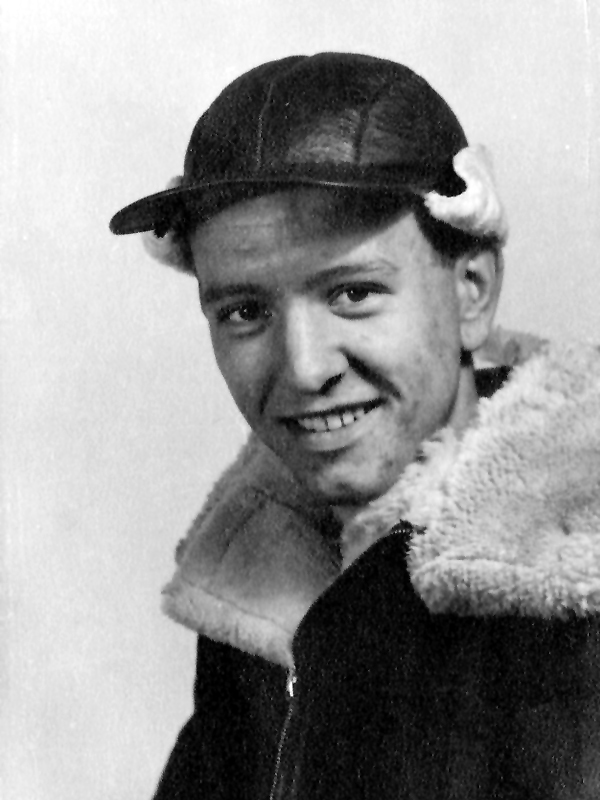 Three photos showing Jim wearing his A-2 flying jacket which has on its back a B-17 art with the 'Peters Pride' written above it. Thirty (30) bomb markings denote 30 missions flew by the Greek parentage gunner and in the last one, it’s written "The End", for his last combat sortie. In the last photo, the smiling James wears his Cold Weather 8th Army Airforce WWII gunners cap worn by all bomber crews featuring full shearling using the same leather as his B-3 jacket, with fold down shearling ear flaps and authentic heavy leather visor. (Michelle Holt) 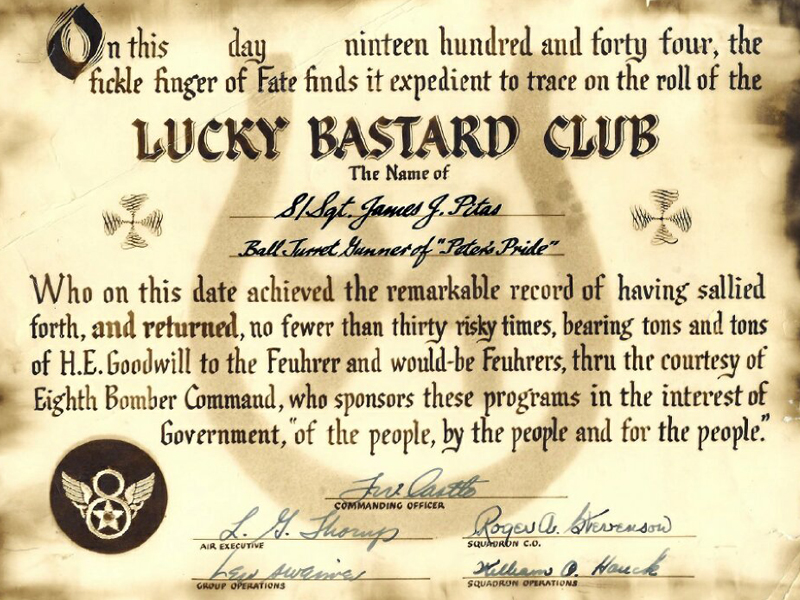 James Lucky Bastard Club certificate, denoting 30 successful missions over occupied Europe. The Lucky Bastard Club was an informal grouping of World War Two European bomber crew members from the Eighth Air Force who completed a tour of duty. They often received certificates, a flyover through the base and an honorary dinner for the crew. Membership gave crews credit for the work they did in the air. They were treated with high respect by their fellow peers and military cohorts. Club members were allowed special spots in mess halls. Some forty thousand airmen died by the end of World War Two or one in three crewmen. A World War Two bomber crew member's life expectancy was fifteen missions. At the beginning of the war, twenty-five missions were considered a full tour of duty, but once pilots became more efficient and effective in air combat, the standard increased to thirty-five missions. (Michelle Holt, further info via Wikipedia) 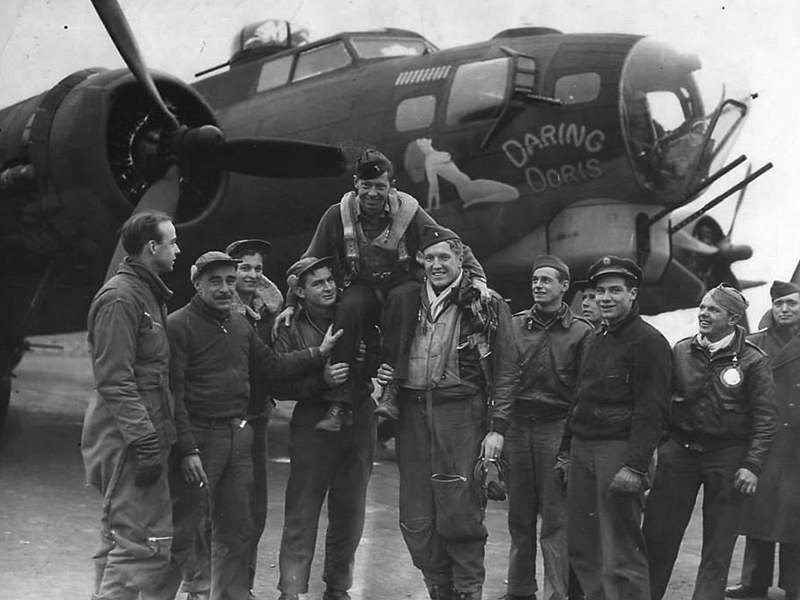 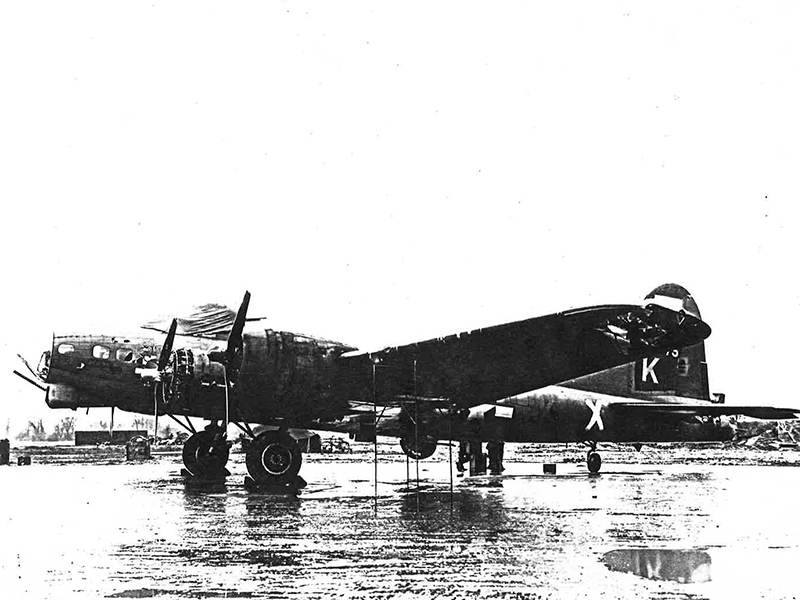 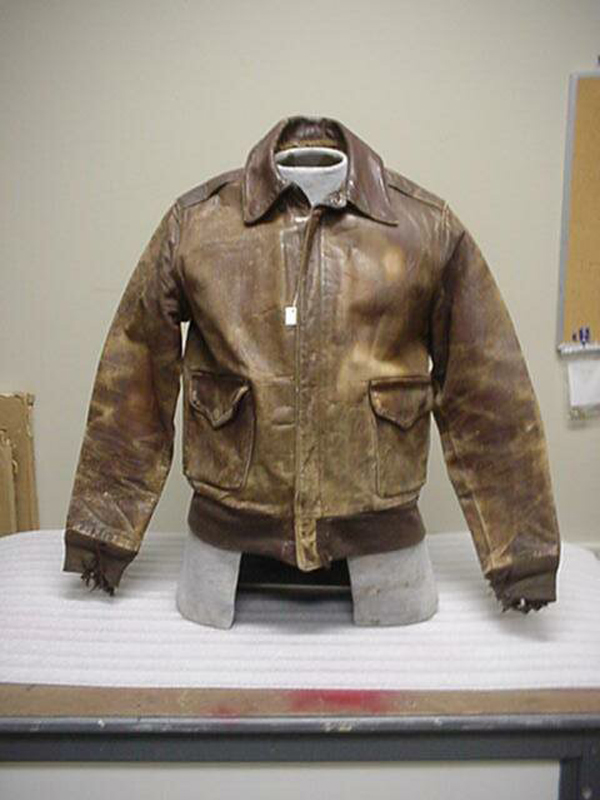 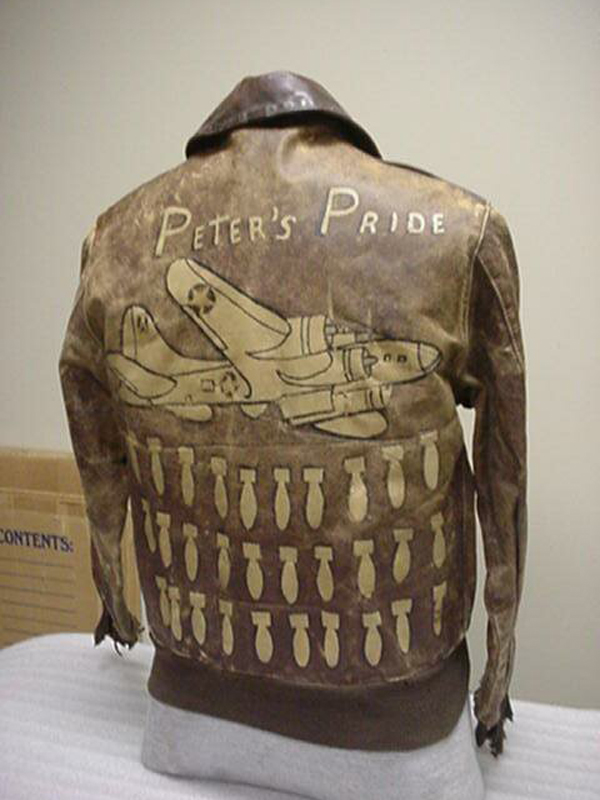 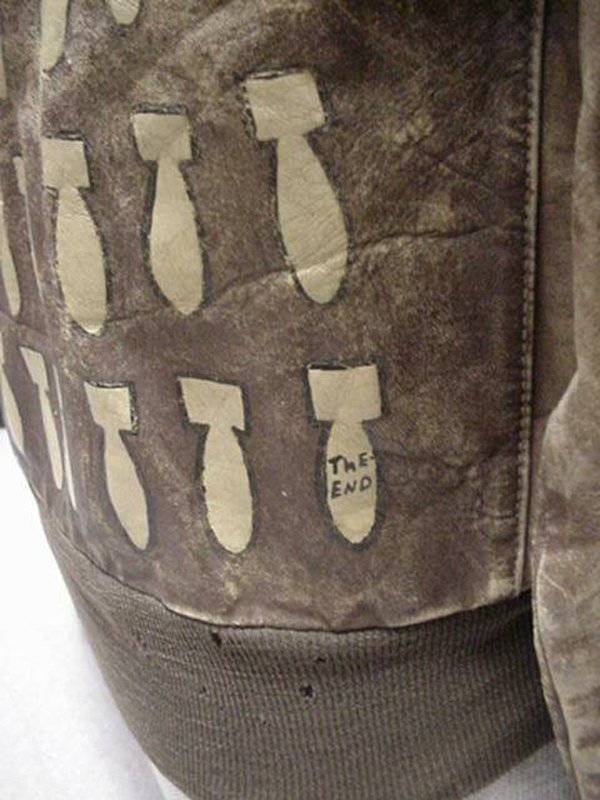 In the sequence of this photos, above and below, the famous jacket wore by James Pitas during his WW2 tour can be seen in EAA along with other memorabilia like his USAAF aircrew wings. The Air Medal and DFC are the actual medals he earned for his service and the ones he carried on his chest in the first photo of this tribute. The Ferguson Crew photo was taken after they arrived in England from the US. Pitas is on the top Row, 3rd from left. The colored photo shows the two long-time friends, Pitas and Mayer during one of their meetings. Their friendship was kept alive as both their grandaughters became also friends in their effort to preserve their story. (Michelle Holt & Rebecca Mayer Alm) 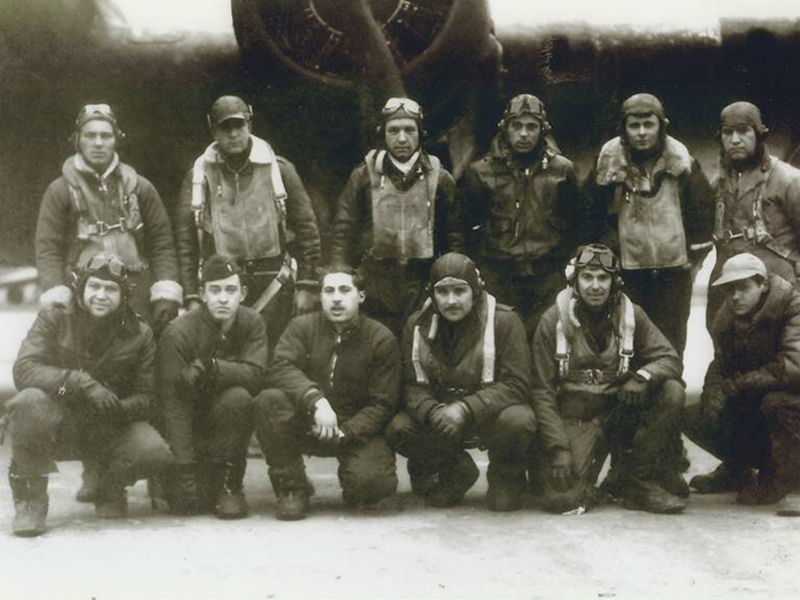 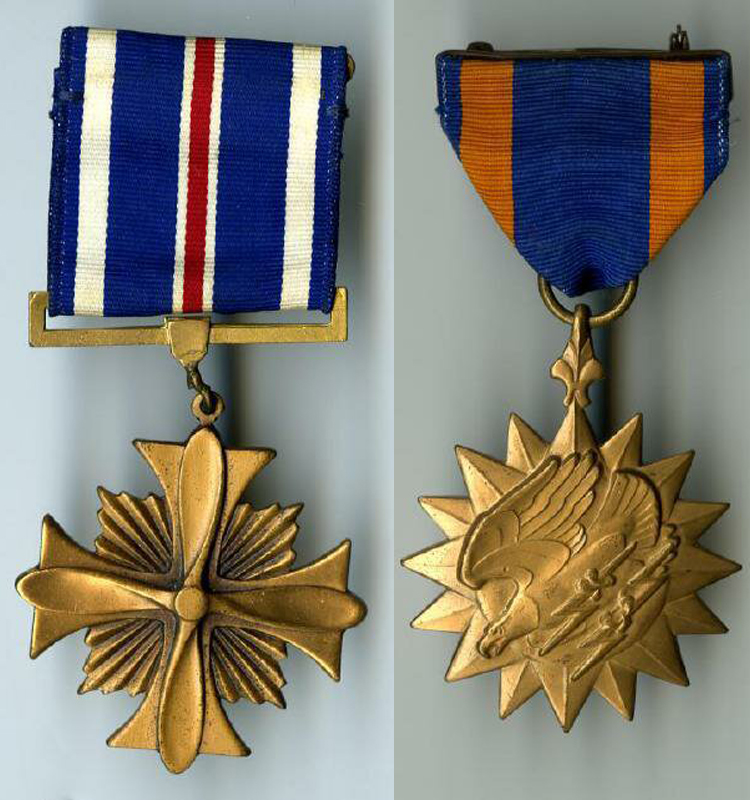 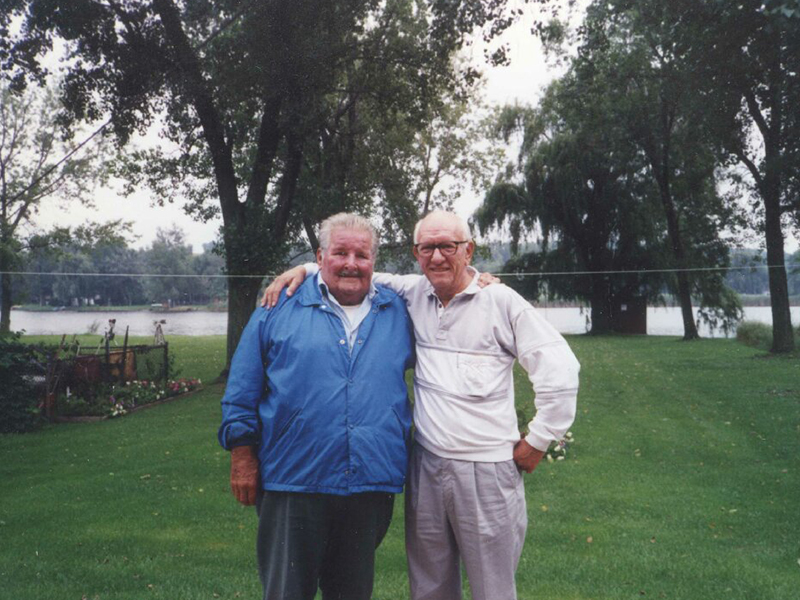