Leon Moutsos was the son of the Greek immigrant couple, Emanuel (Volakis) Moutsos and Jasmine Moutsos. Emanuel gave the nickname of Moutsos when he came through Ellis Island (as he did not speak English). Later his real last name was appended as a middle name. He immigrated from Samos in 1908. He came over via Ellis Island, got a job on the railroads in Tennessee, and worked his way over to Chicago. He entered the draft at 18 years of age and fought in the Meuse-Argonne Offensive, where he was gassed by the Germans. He survived the battle, was given an honorable discharge and awarded the Purple Heart He remained a barber for the rest of his life and retired in Colorado. Leon was born in Colorado and continuing his father legacy, he fought in WW II and during the Korean War, was debriefing Greek Generals as he spoke fluent Greek and English. They flew him to Cyprus during the Korean War as a translator (he had a top-secret security clearance). He was also involved in aerial photography and continued his photography pursuits (as a hobby) after the war. It appears that Leon completed 30 combat missions flying as a gunner with the B-24 Liberators of the 707th Bomb Squadron, 446th Bomb Group. The 446th BG completed a total of 273 missions, 7259 sorties, and lost 58 aircraft, suffered 450+ KIA and 51 MIA. They claimed 34 enemy aircraft confirmed destroyed with an additional 11 probably destroyed. The 446th Bomb Group, who came to be known as "the Bungay Buckaroos" after the name of their Suffolk base, flew B-24 Liberators on strategic, support and interdictory missions over Europe. The Group led the Eighth Air Force and 2nd Bomb Division on the first heavy bomber mission on D-Day, 6 June 1944, and continued to support the ground forces move eastwards, dropping airborne troops into Wesel, north-west Germany, as part of the advance across the River Rhine. Leons son, Demetrios, heard a story from his mother which cannot be confirmed, according to which his father and the pilot (Roy Crosland) returned after a bombing raid where the remainder of the crew had been killed in action. In another incident, he describes that his oxygen mask froze up and he passed out only to be revived by another crew member who just happened to check on him. Had the other fella not checked upon him, he would have asphyxiated. That was really close call! Leon Moutsos awarded the Distinguished Flying Cross and the Air Medal with 6 Oak Leaf Clusters and the three Bronze Oak Clusters, and 5 citations for Valor in battle, as well as the European-African-Middle Eastern Service Medal with 4 battle stars along with a Good Conduct Medal. During the Korean War, he was recalled into service as a Technical Training Instructor in photo intelligence and camera repair and armament. His son didn't trace an official documentation regarding his debriefing assignments as a translator for Greek Generals stationed at Cyprus, but he did tell him all of that was Top Secret and he was required to pass additional security clearances to discuss the following: aerial and ground photography, aerial and ground camera repair, aerial photo intelligence, aircraft bomb-sight & armament systems, logistics, biological warfare, psychological warfare, & chemical warfare. It appears that Moutsos served a total of 9 years and 4 months in the military. After his military career (9+ years) he began working with computers at United Airlines where he worked for over 25 years. He then retired from UA and worked for BofA for another 25 years as a senior programming consultant where he helped develop the ATM system. He lived to be 92 years old and passed away peacefully at his home in Napa CA in 2014.

"My Father and I had a tumultuous relationship....alternating between very close....and quite distant. In his later years, we were estranged for some time. When he passed away I buried him at sea (from my Kayak) in the Pacific Ocean (a wish he had conveyed to me decades before as he loved the ocean and sailing and always desired to be buried at sea). He was a proud man and was not quick to forgive or forget. He was especially stubborn when it came to our relationship. But after researching his accomplishments and seeing what he went through, I have deeper insight and compassion for him. I honored him the best I could when he passed....and will continue to do so." 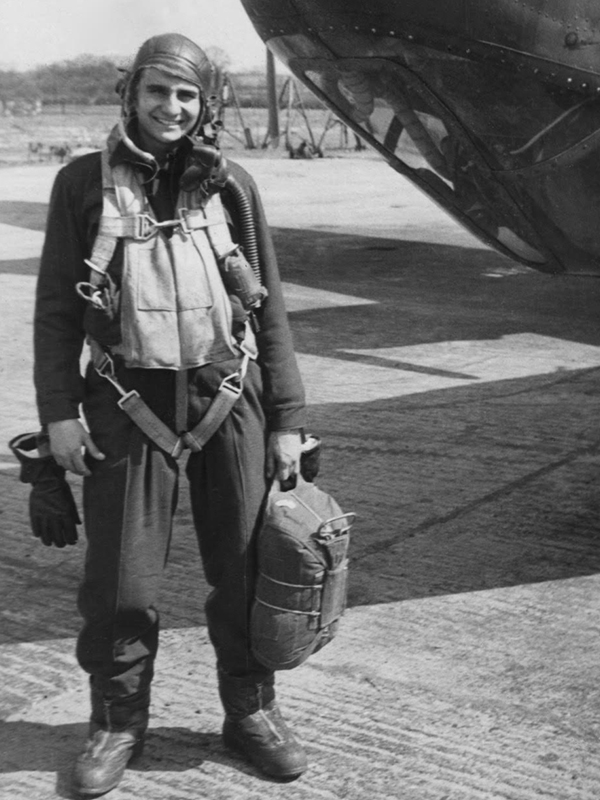 Leon Moutsos pose happily, maybe because he returned safely for one more time. Leon was a waist gunner, firing his guns from the side of his bomber, repelling enemy attacks. The waist guns on the earliest B-17Gs were fired through completely open windows, as on the B-17F. In order to reduce the cold and discomfort felt by the gunners, closed Plexiglas windows were added. Initially, this was a framed three-piece unit as seen here but, later, an improved single-piece clear-vision item was introduced, with the gun mounted on the lower sill rather than on a swivel post. It was not until Boeing and Vega -50, and Douglas -25, series aircraft that the problem of gunners obstructing each other in combat was solved by the introduction of staggered waist gun positions. Due to the infrequency of beam attacks in actual combat and the limited field of fire of the guns, the waist position was one of the least effective defensive stations, and also statistically one of the most dangerous due to its exposed nature. (Dimitris Emanuel Volakis & Paul Eden) 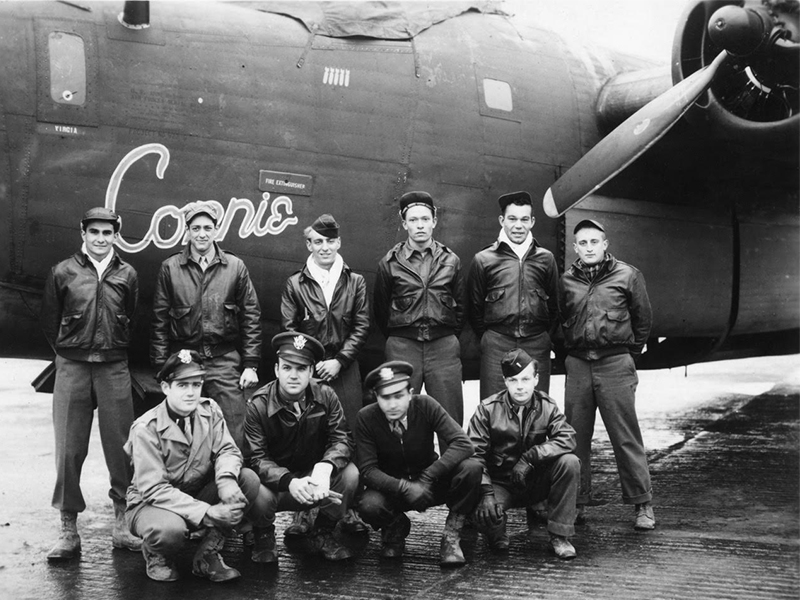 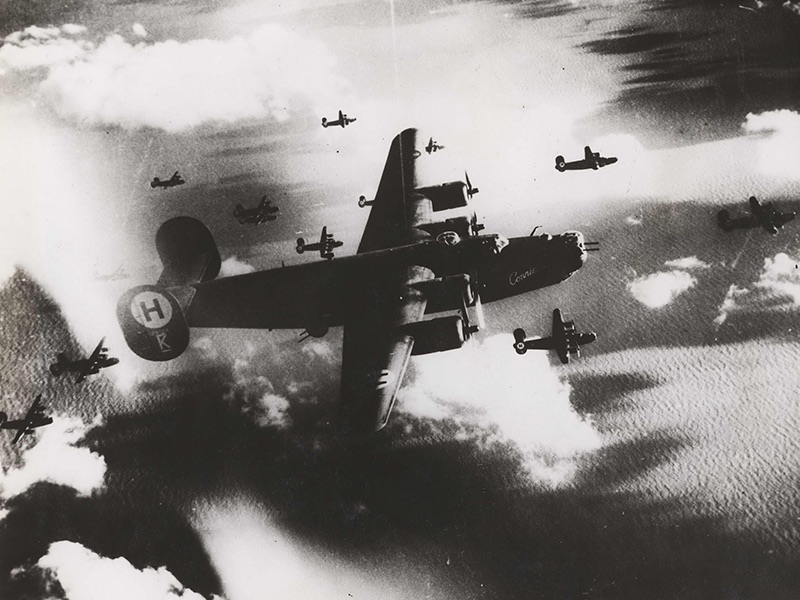 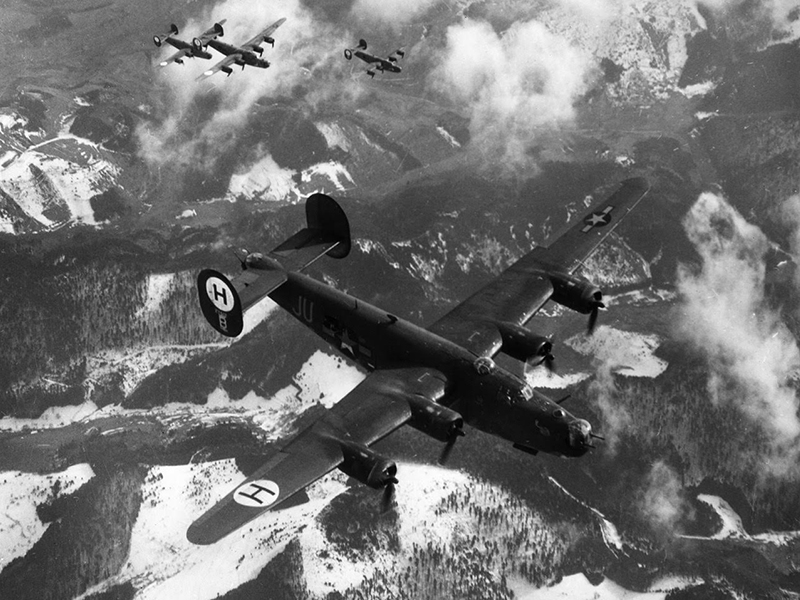 The Consolidated B-24H, 41-29124, ‘Connie’, JU-G was one of the planes which Leon Moutsos flew during his combat tour with 707th BS. The photos above the profile show 'Connie' in-flight during combat missions. The aircraft was lost with his crew on June 21, 1944.The crew consisting of 2Lt. John D. Nicholson (P), 2Lt. Jimmie D. Collins III (CP), 2Lt. Raymond L. Fisher (N), 2Lt. Robert C. Steldt (B), S/Sgt. Welborn H. Smith (E), S/Sgt. Edward M. McHugh (RO) Sgt. George J. Zweier (BTG), Sgt. Warren E. Smith (LWG), Sgt. Peter A. Bausano (RWG), and Sgt. Jay A. ter Haar (TG). On June 21, 1944, Pilot 2nd Lt. John D. Nicholson and the crew of the B-24 "Connie" took off with the rest of the squadron on a mission to bomb the Daimler-Benz aircraft engines plant in Genshagen/Marienfelde, Germany. After completing their bombing run, they began the return trip to England. It wasn't long before Pilot Lt. Nicholson was calling to other members of his formation to inform them that he was low on gasoline. Somehow the aircraft was leaking fuel, possibly from a punctured fuel tank resulting from a flak burst. The aircraft continued to fly in formation for a while but eventually had to drop out and proceed on its own. One hour after dropping out of formation, Lt. Nicholson was again heard on the radio reporting that he was on a 260 degree heading and asking for a "QDM," or magnetic heading. While Nicholson was attempting to get this navigational aide, use of the channel he was on by aircraft of the 448th Bomb Group prohibited his message from being received by a ground station or possibly hindered his receipt of the requested heading. Either way, the requested heading was not received by the radio operator. Nicholson made repeated attempts to get the proper directions to no avail. At 1255 hours, when his plane was three kilometers southwest of Zwaneberg, thirteen kilometers south of Amsterdam, the "Connie" was shot down by anti-aircraft fire. The aircraft had reduced altitude so much that it was too low for a successful evacuation of the crew. Lt. John D. Nicholson and the rest of his crew all perished when the plane crashed. Their bodies were recovered by the Germans and buried in Hoofddorp on July 3rd. (Copyright Gaetan Marie, photos by Dimitris Emanuel Volakis) 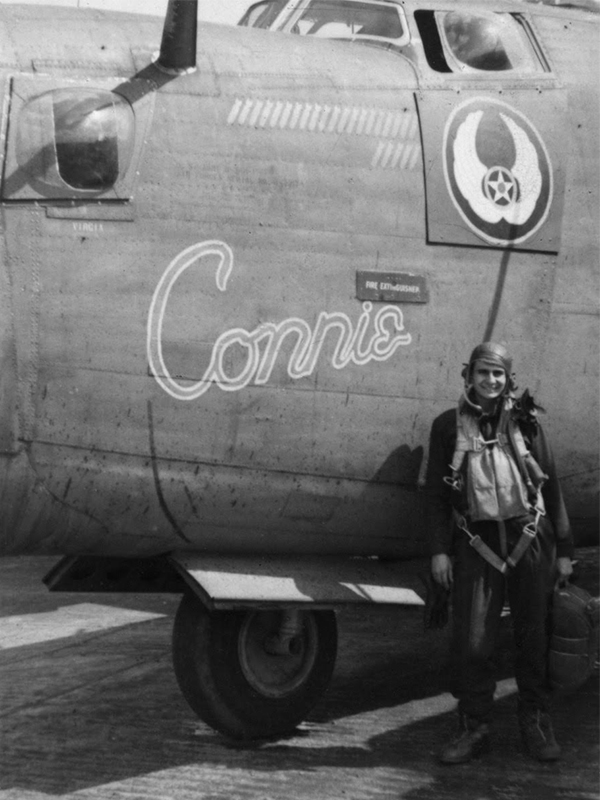 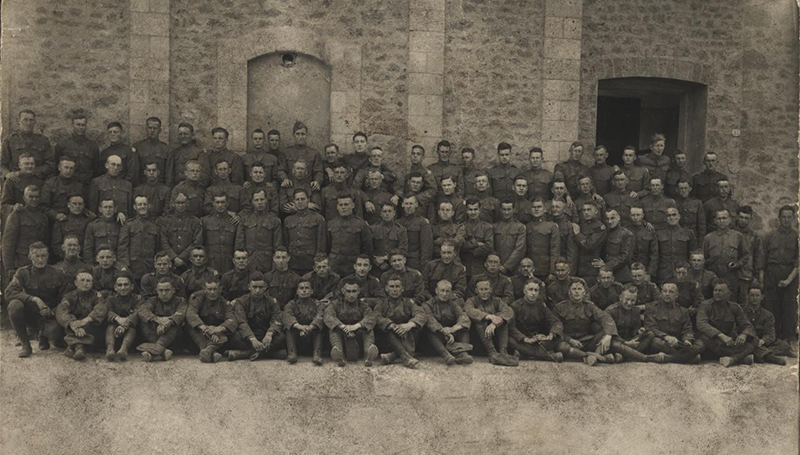 Above: Emanuel (Volakis) Moutsos was one of the thousand Greek Americans who fought during WWI. The photo above was taken in France and somewhere there is Leon father. According to Emanuel's grandson: “ I believe he is in the first row....but memory fails and there is no one left alive that can positively identify him at this age. My guess would be the 2nd man from the left in the first row.” Andrew T. Kopan Ph.D. in “Defenders of the Democracy: Greek Americans in the Military”, Greek-American Review, September 1998, pp. 5-10, wrote “This ancient injunction that one’s country is to be revered above one’s parents and ancestors has been an ideal which Greek immigrants kept close to their hearts. The Greeks, founders of democracy 2,500 years ago, have been imbued with its defense during their long and glorious history. Defense of country and democracy was a trait of Greek immigrants to whatever country they immigrated to. This is especially true in the United States, where despite their small number in the total population, served in practically all of America’s wars….Indeed, the fire of patriotism of Greek-Americans was exemplified in deeds of unequivocal meaning. Early historical accounts and newspapers in the United States extolled Greek-American patriotism. There was not a more loyal and patriotic class of people in this country than were the American-Greeks. A great percentage of them served in the armed forces of America (a proportion believed to be greater than that of any ethnic group in the United States). The great majority of them who came within the draft ages flatly refused to claim an exemption.” Leon followed his father example and proudly served in USAAF during WWII. (Dimitris Emanuel Volakis)

Below: Leon Moutsos pose in front of ‘Connie’ after another successful mission. In England, the B-24s received some modifications and one of the most visible was the armour plates below the cockpit windows which sometimes obscured some of the nose art. Often the nose art was restored in the armoured panel, sometimes it was not or only partially. In the 42-29124 there is no such problem as can be easily seen in the photo. Although, this panel carries the USAAF Insignia. (Dimitris Emanuel Volakis) 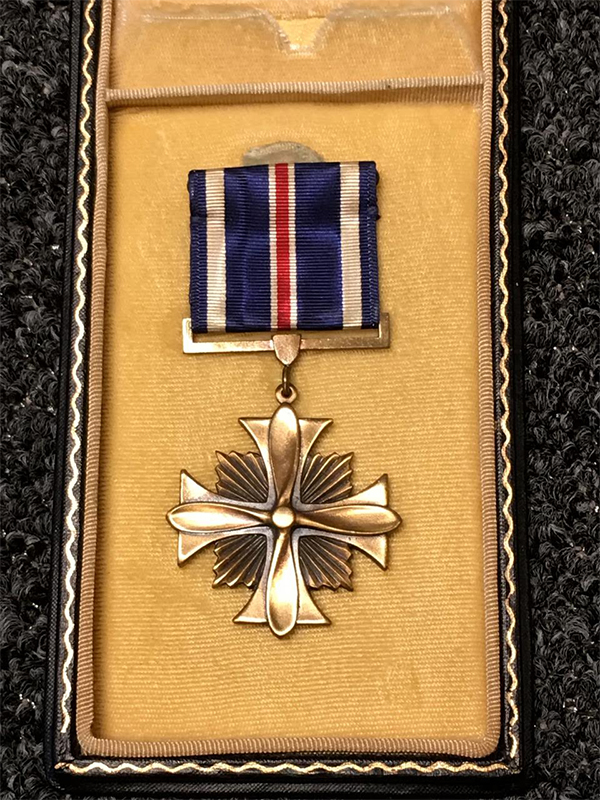 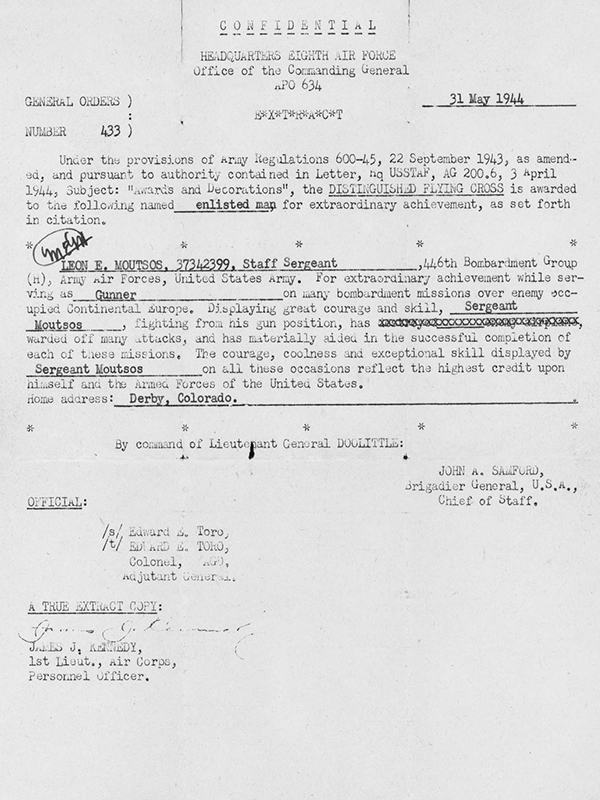 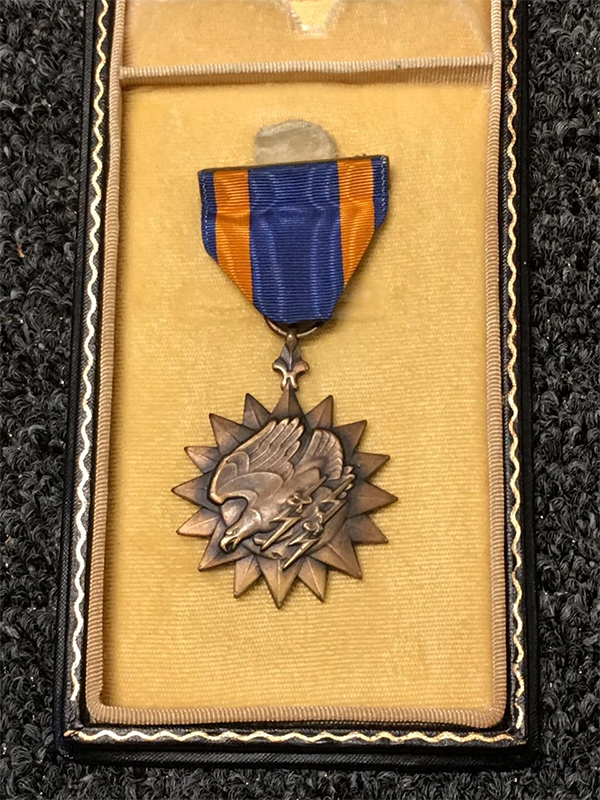 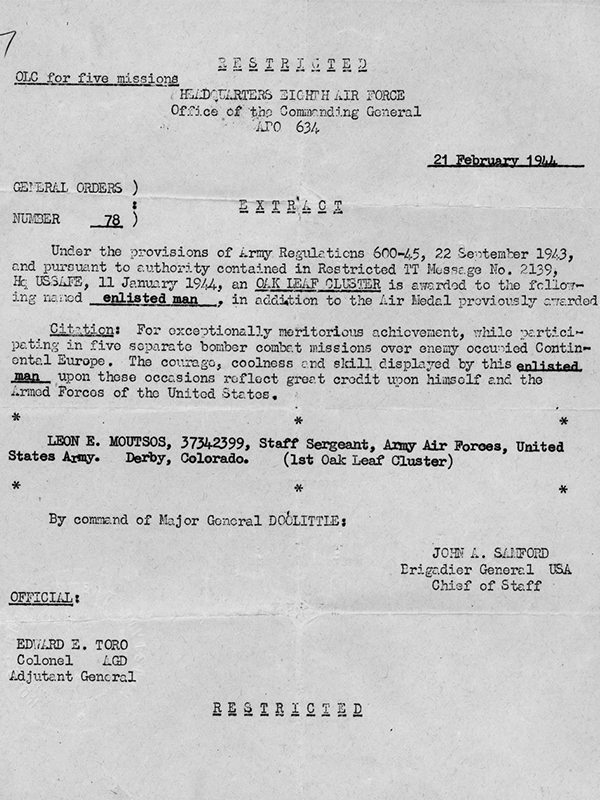 The Distinguished Flying Cross and the Air Medal which were awarded to the Greek American, waist gunner for his services with the USAAF during WW2. According to the DFC Citation: " For extraordinary achievement, while serving as a gunner on many bombardment missions over enemy occupied Continental Europe. Displaying great courage and skill Sergeant Moutsos, fighting from his gun position, has warded off many attacks, and has materially aided in the successful completion of each of these missions. The courage. coolness and exceptional skill displayed by Sergeant Moutsos on all these occasions reflect the highest credit upon himself and the Armed Forces of the United States. (Dimitris Emanuel Volakis)