Angela Karamanos was born on 25 January 1996, a second-generation Greek American, child of John and Stella Karamanos. Her grandfather and grandmother from her father's side, Christopher and Penny  Karamanos heritage is from Gytheio and Stoupa in Laconia and Messinia district. Similarly from her mother's side, Peter and Tia Paterrakis's heritage is from Crete (actually Angela is related to a previous USAF Thunderbird Commander and Vietnam War veteran, Chris G. Paterrakis - https://www.greeks-in-foreign-cockpits.com/pilots-crews/fighter-pilots/chris-patterakis/). Both families immigrated to the United States after WW2. Angela is fully aware of her great heritage and according to her words:

"I love my heritage and it has played a huge role in how I’ve grown up. Making people food, hosting my co-workers, working hard all started from my heritage and being an immigrant family! I try to go back to Greece frequently as all our family is still there. I have been there 5 times and I have seen all the villages where my grandparents grew up."

After graduating from high school with a 4.4 GPA, she decided to enter the Air Force Academy and graduated with a Systems Engineering degree in 2019 and was a D1 Soccer standout, earning All-Mountain West accolades, Team MVP, Offensive Player of the year, etc. as a midfielder. While attending the Air Force Academy she got interested in flying. Her training pipeline included the DA-20, T-6, T-1, T-38, and finally the powerful F-15E Strike Eagle. She graduated from the US Air Force one year F-15E Strike Eagle training syllabus with the 334th Fighter Squadron at Seymour Johnson Air Force Base, N.C., and was honored with the distinguished graduate award, the 'River Rats, I would go to war award with you'. She is a qualified Weapons Systems Officer (WSO) a vital element for the successful completion of the missions assigned to 'Mudhen' as the F-15E is also known to its crews. As told by Angela to the Greeks in Foreign Cockpits team:

"The strike eagle is a super unique aircraft because we have 2 people in the plane. This allows us to do 2 times more duties and focus more on those duties. It’s awesome and being able to have another person there to back you up allows us to be more effective. We don’t miss and we take pride in that!  Working as a crew to solve problems and make the right decisions. We fly at 500 feet 500 knots so there isn’t a lot of room for error."

Angela is currently serving with the 389th FS commonly known as the 'Thunderbolts' part of the 366th Fighter Wing at Mountain Home Air Force Base, Idaho and soon she will have her callsign assigned to her. We asked her if she is thinking later to jump on the front seat of the 'Mudhen':

"I enjoy being a WSO right now but I’m leaving my options open so I can go for it if it’s something I decide I want to pursue. I hope to inspire other women to not be scared to take up career fields that are primarily male!"

We wish Angela all the best in her career in USAF and we are very excited for her service making proud both American and Greek people. Happy flying and safe landings Angela. 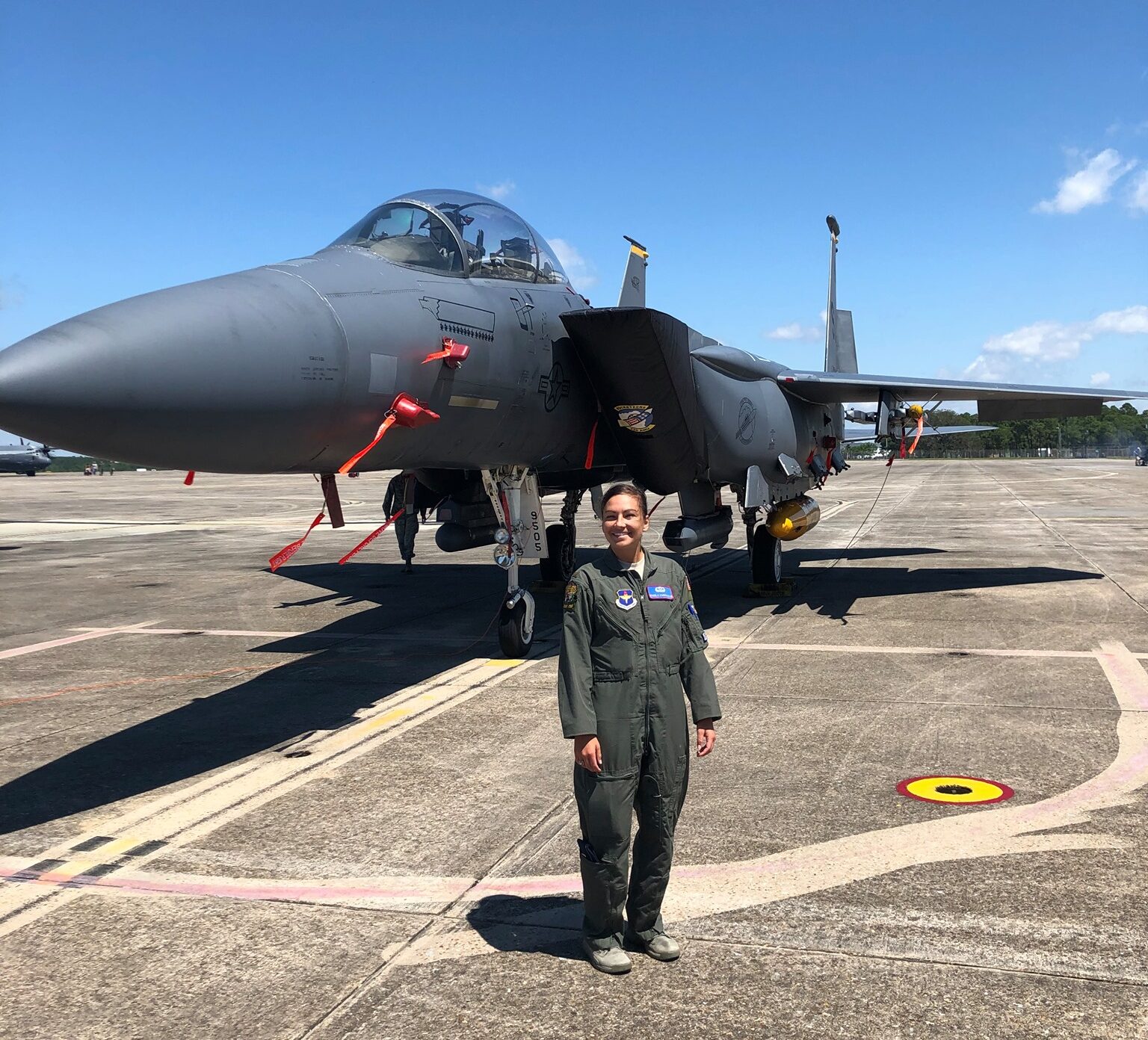 Angela poses in a happy mood in front of her Strike Eagle, during the first time she saw a Strike Eagle, up close in person, while she was training as a Combat Systems Officer. (Angela Karamanos) 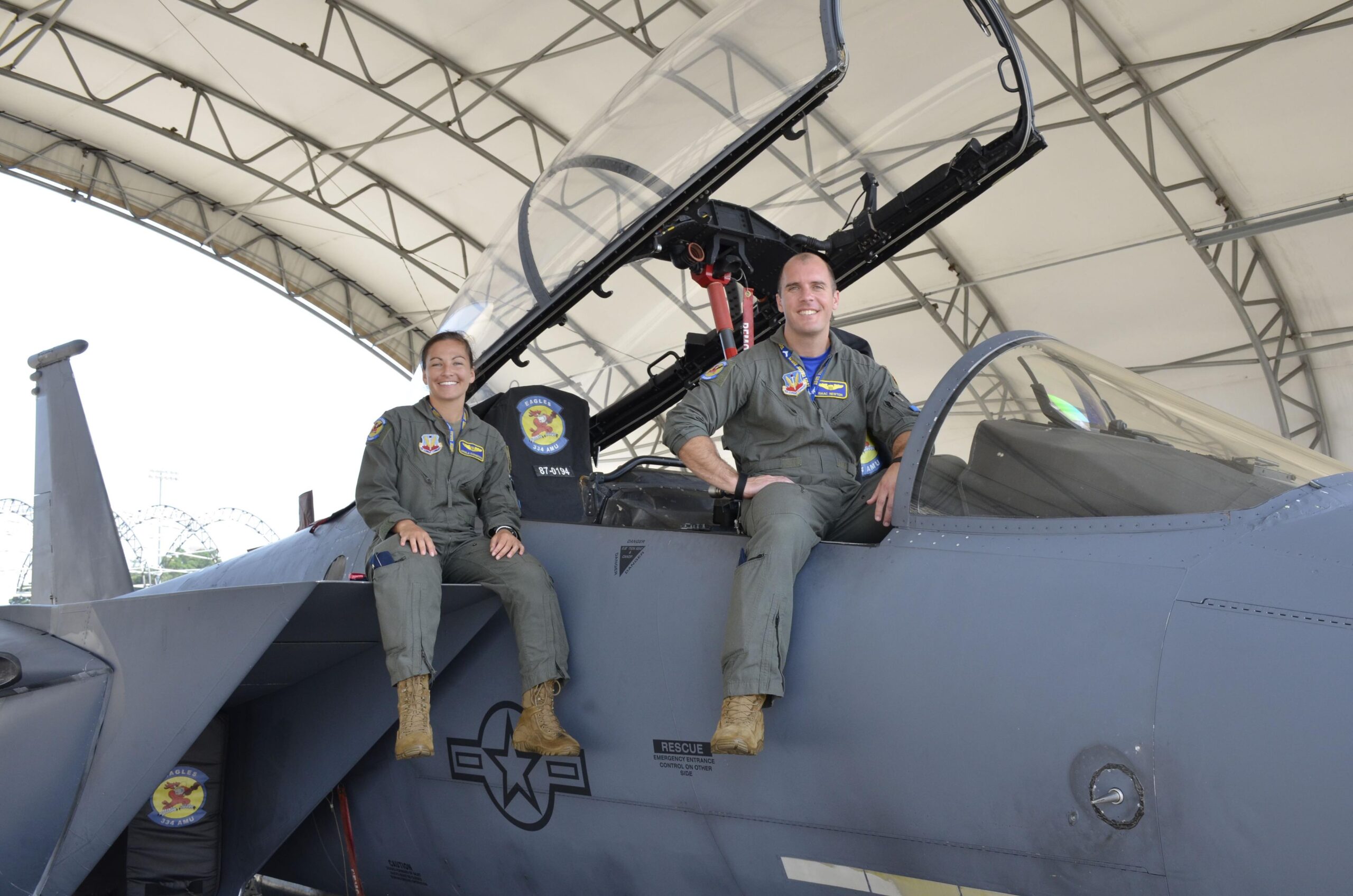 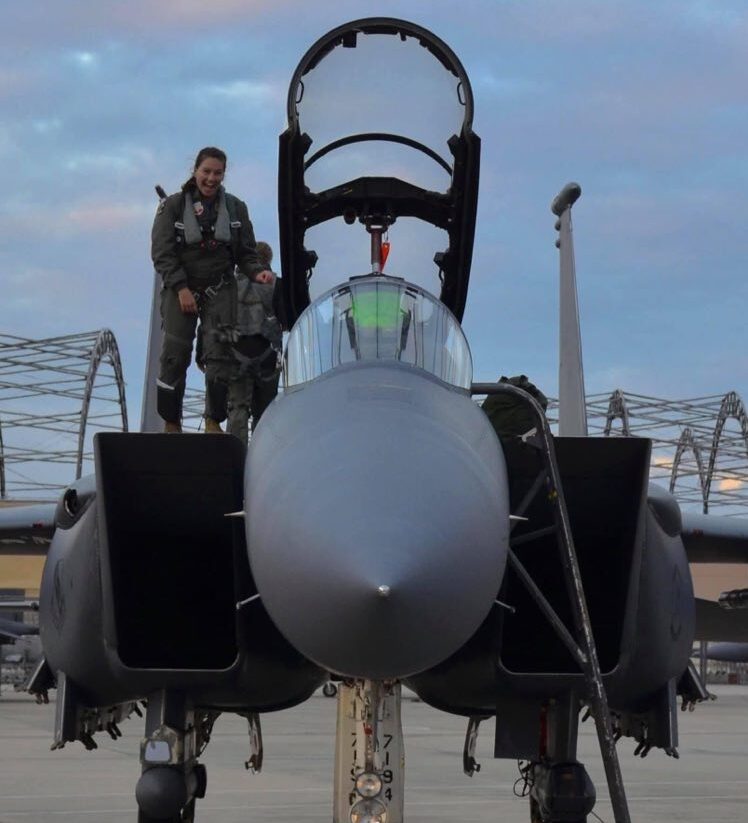 Angela smiles after her first-ever Strike Eagle sortie while training as a Weapons System Officer for the type. (Angela Karamanos) 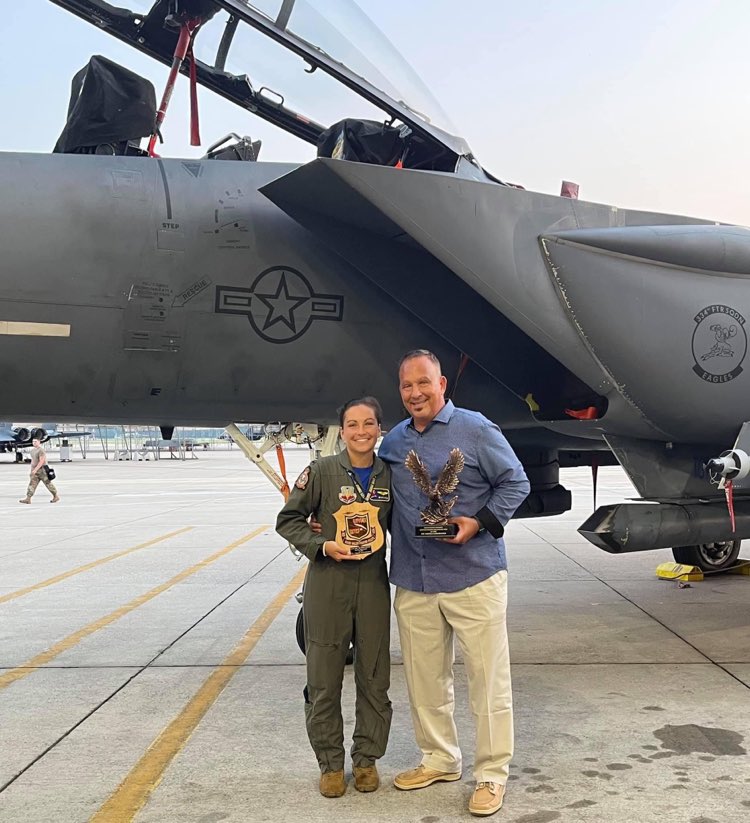 A proud father, John Karamanos holds her daughter's award as a distinguished graduate in the WSO School while Angela holds the River Rats award. (Angela Karamanos) 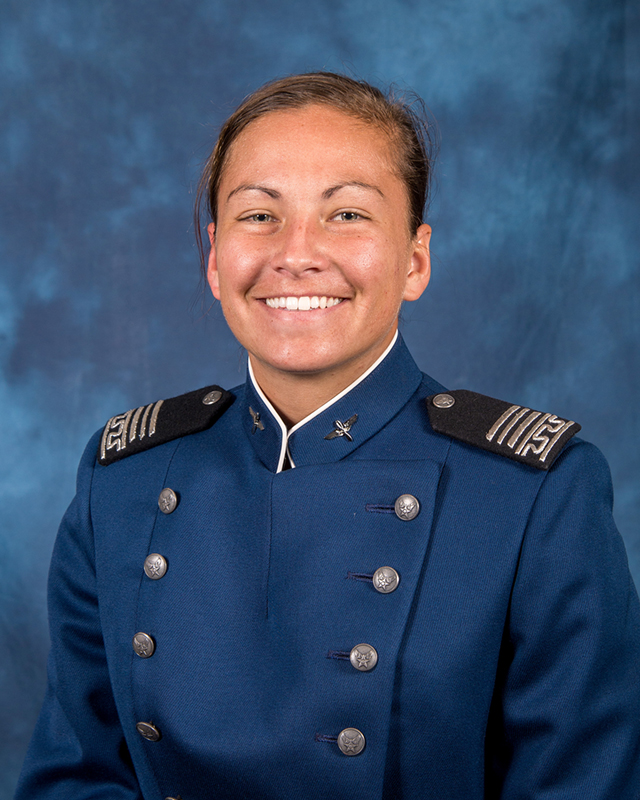 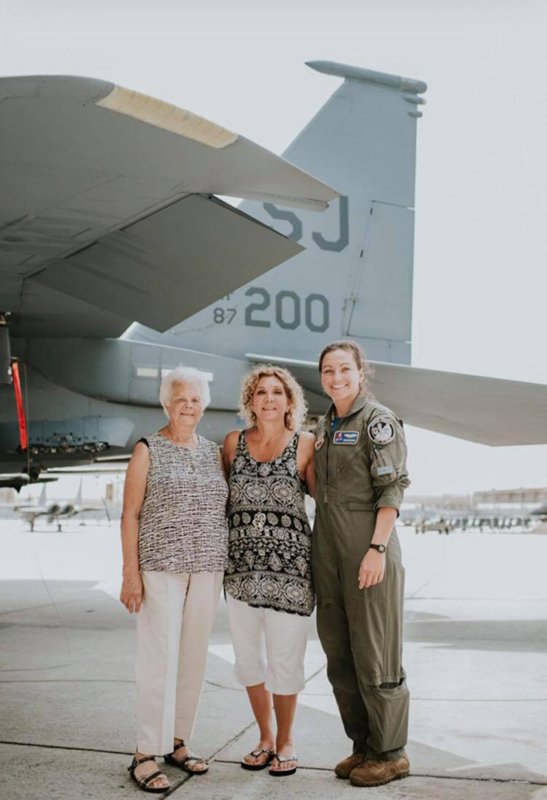 Angela her mother and grandmother pose in front of a Strike Eagle after her graduation from the F-15E B' Course. (Angela Karamanos) 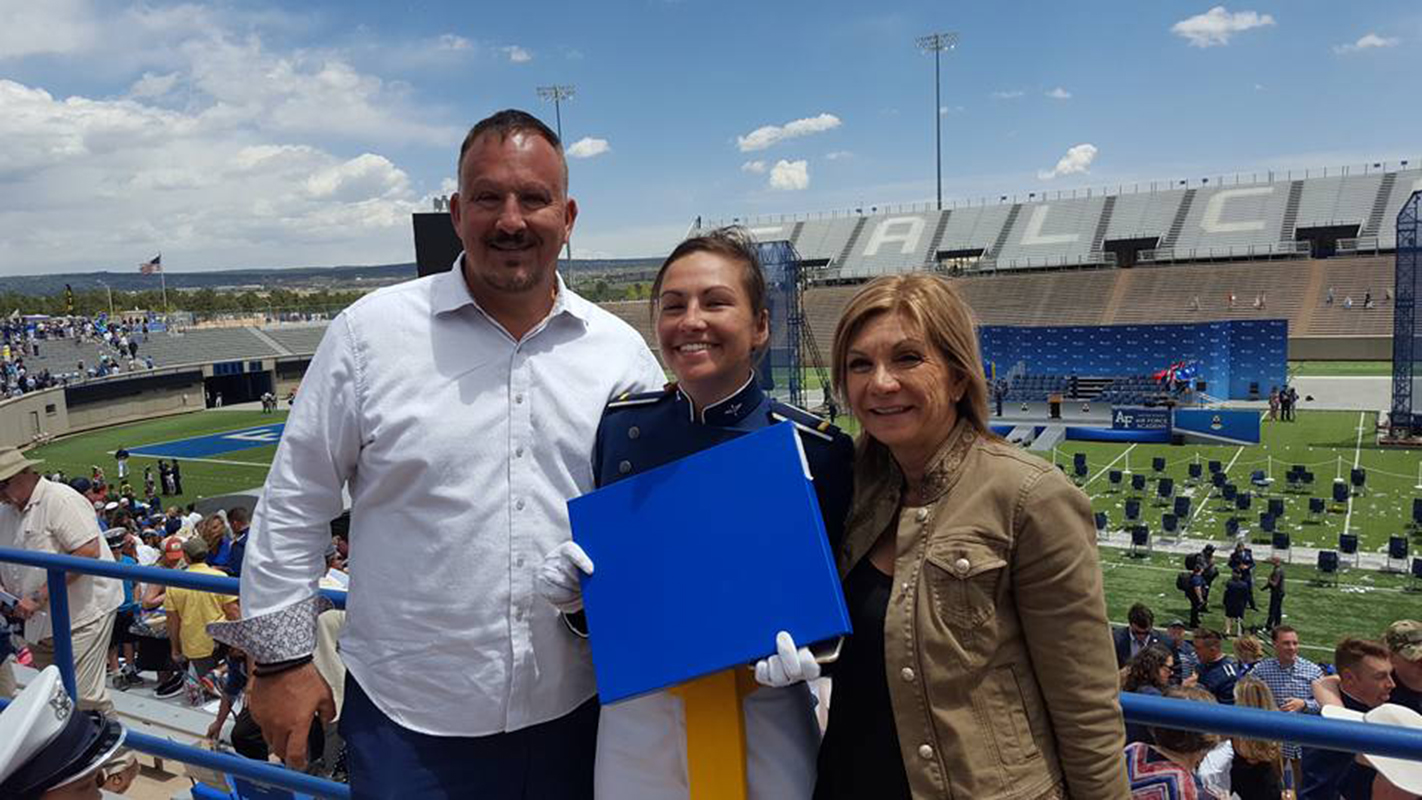 John and Stella Karamanos proudly photographed along with Angela during her graduation ceremony from the Air Force Academy. (Angela Karamanos) 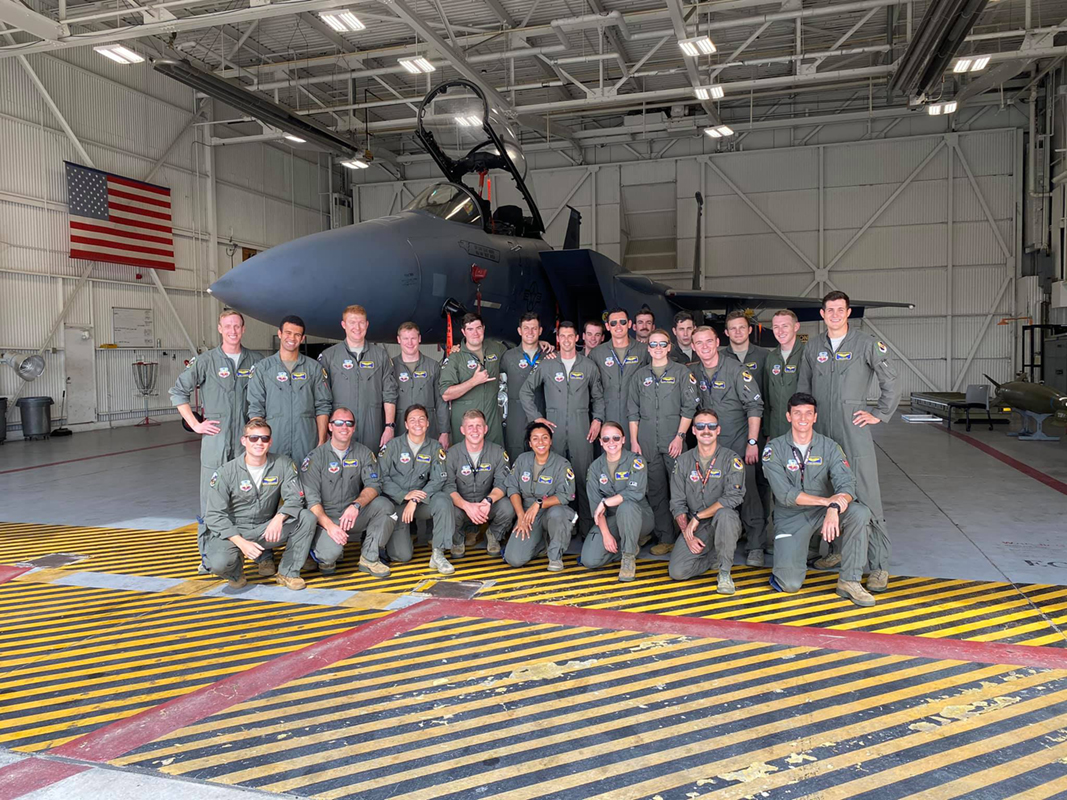 Group photo from the graduates of the F-15E B' Course. Angela kneels third from the left. (Angela Karamanos) 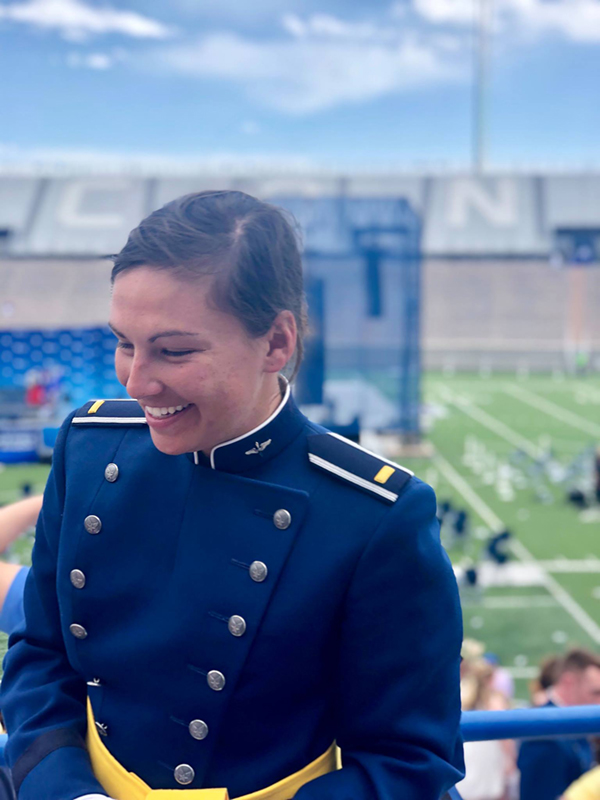 Angela smiles after her graduation ceremony from the Air Force Academy. (Angela Karamanos) 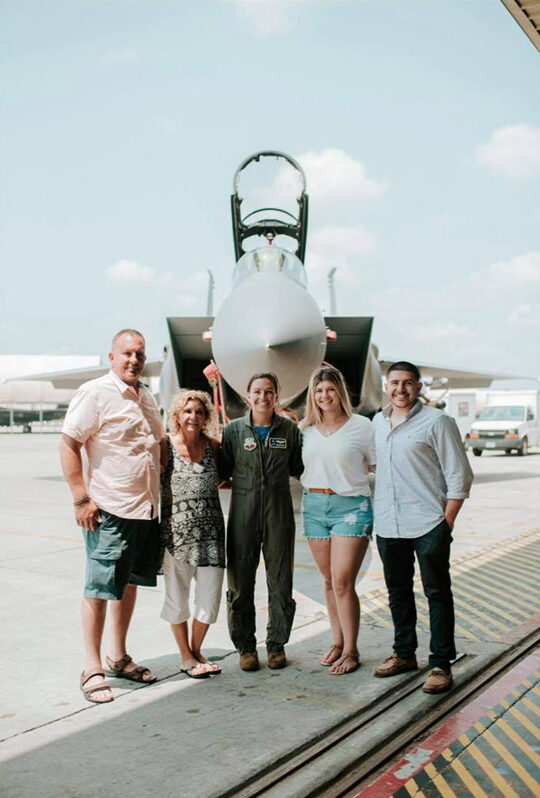 Angela and her family in front of a Strike Eagle after her graduation from the F-15E B' Course. (Angela Karamanos) 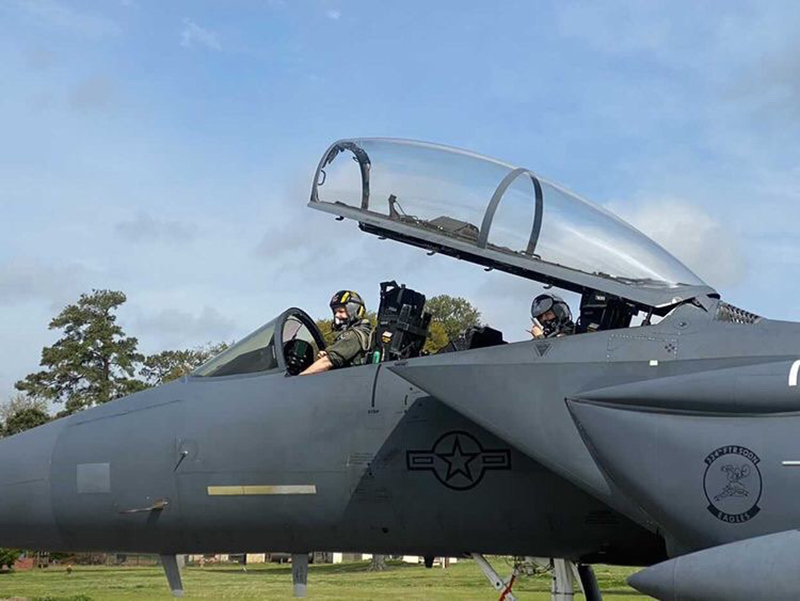 Angela waves her hand from the cockpit of a Strike Eagle. (Angela Karamanos) 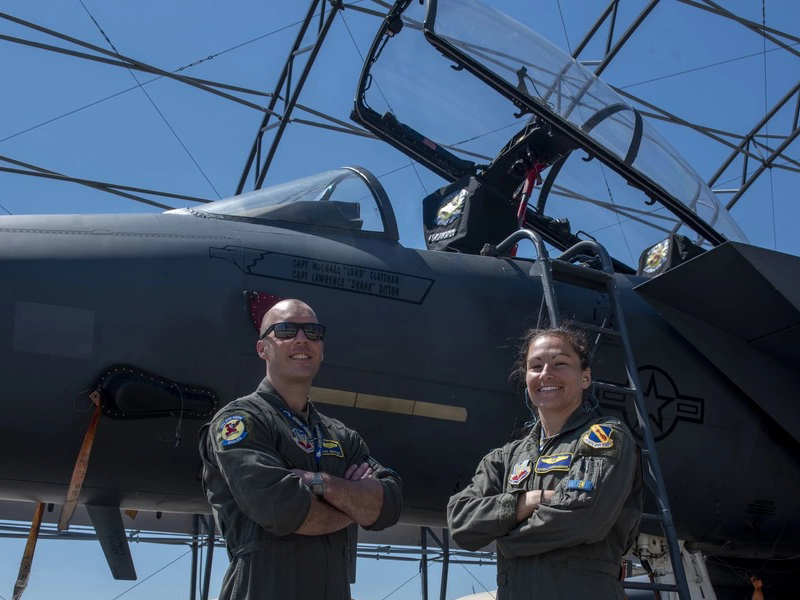 We would like to thank Angela Karamanos for her support of our cause, and also for letting us present her in Greeks worldwide, as well as the USAF Public Affairs Ofice for giving us the 'green light' to make this presentation.

Top Picture credit by Stuart Norris a talented photographer whose collection can be seen in his Flickr account photostream at the following address: https://www.flickr.com/photos/53647931@N05/