RHAF Class 21-B US Training 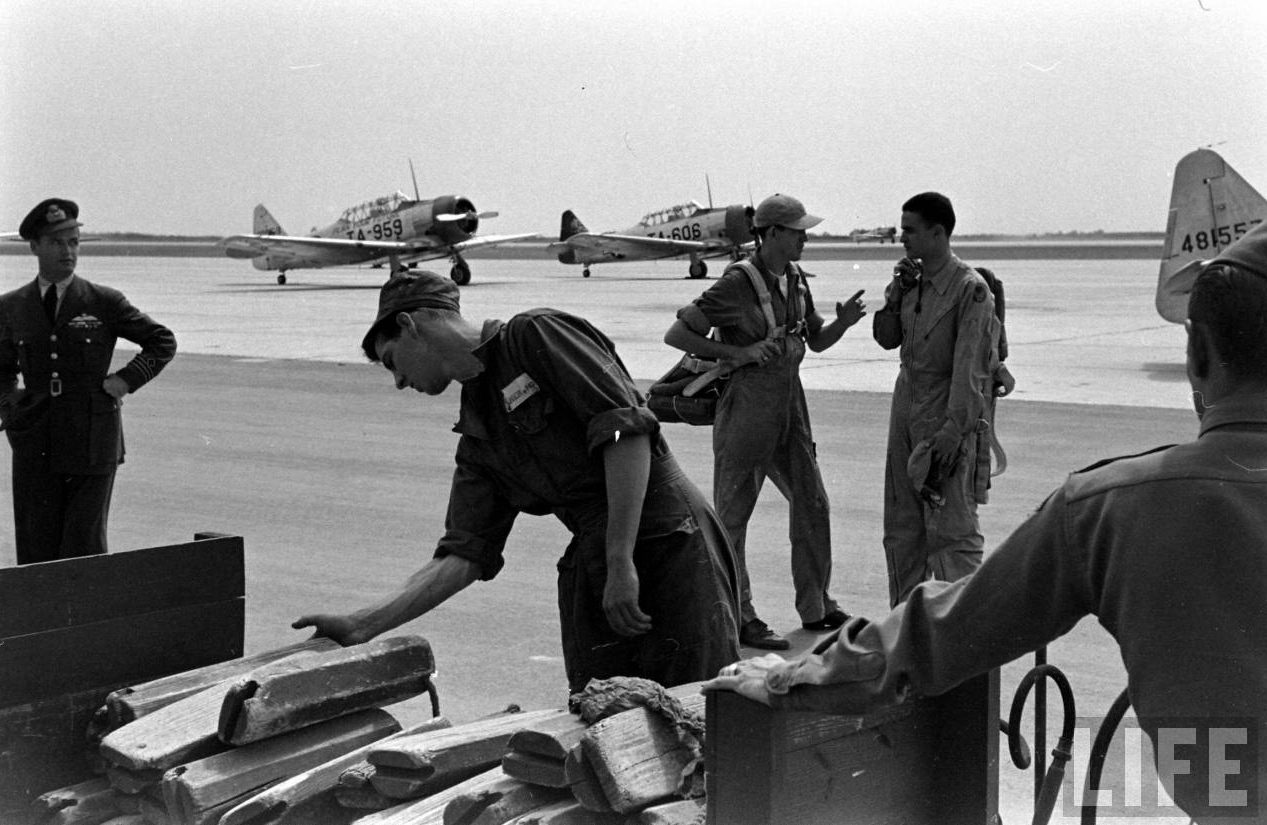 RHAF Aviation Cadets, along with their American training officers and ground crews prepare themselves for a next sortie with the T-6 Texans in the background, at Randolph AFB. (LIFE Magazine) 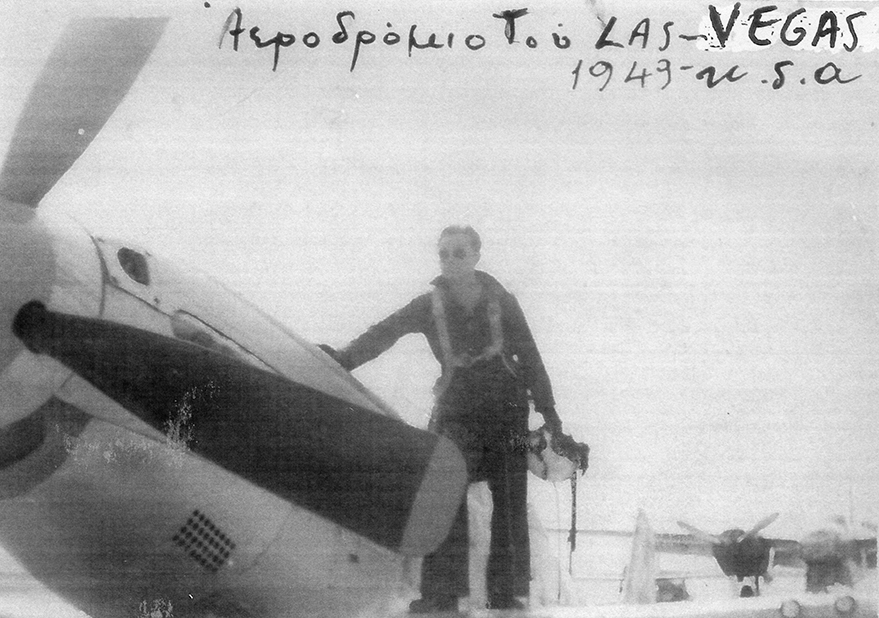 From the year 1947 and onwards, the US Air Force Mission in Greece undertakes the financial support of (then) Royal Hellenic Air Force (RHAF) replacing the British Air Mission, which of course continues its direct involvement in RHAF issues. It was more than obvious that the time of re-equipment, the education and reorganization of the structure of RHAF would be based on US standards. The RHAF ΗQ’s considering the new doctrine which would transform the air force decided to send some of the aviation cadets, known in Greece as ‘Icarus’, to be trained in the United States. The high education costs, which reached $ 50,000 per student, for a full educational cycle, dictated that only a small number of aviation cadets could be trained overseas. Fifty young Greek men transferred from March 8, 1948, with successive flights of the C-54 Skymaster of the Military Air Transport Command, to the United States. These students belong to the 21-B Class and they were accepted for training in RHAF, on February 21, 1948. The 21-A Class began its training 2 months earlier and it had already decided to be trained entirely in Greece. The RHAF students were based is Randolph Air Force Base, in San Antonio, Texas, where they were trained their USAF colleagues of 49A-Class. Both American and Greek cadets were divided into four Training Units.

The entire training program, from ground school to flying training was in the English Language enriched naturally with the countless Americans idioms, something leniently tyrannical for the young Greeks. Flight conducted in T-6D aircraft Texans (the well-known Harvard in Commonwealth service) in which the RHAF cadets flew about 200 hours, both with their instructor as well as solo. It must be noted that the 21-B Class pilots, were the first who were granted with the so-called ‘White Card’ meaning their proficiency in IFR flight, which was achieved in the modern Link trainers used by USAF during those years, in Randolph AFB. The T-6s of the four training squadrons were painted silver, except the engine cowling which was painted with the squadron colors. So there were Texans with red, green, yellow or blue cowlings. Unfortunately, we do not know the color the squadron were the Greeks flew, however, it was either red or green. T-6 serials numbers in Randolph A.F.B. used by Greek trainees (without great certainty) are 42-86460 (TA-460A), 42-86128 (TA-128) and TA-027, TA-492A, TA-560, TA-572B, TA-622, whose USAF series numbers could not be confirmed. Of course, all the T-6s were flying with American national markings. Many interesting incidents happened during the cadets training. In a lecture which was given in the Hellenic Air Force Veterans Association one of the members of the Greek Mission in the US, Major General (rt) Ilias Tsamousopoulos (later the leader of the Hellenic Air Force Acro team) remembers:

"During the briefings we had interpreters. In one occasion the training officer ordered the cadet repeatedly to close his canopy in the Harvard (i.e Texan), while on air. The cadet couldn’t understand the order so the pilot landed the airplane, closed his canopy and took off again to complete the flight training!"

After successfully ending their first phase of education, the Greeks were transferred to Williams Air Force Base, in Phoenix, Arizona. For the first time, RHAF pilots would fly the famous North American F-51D Mustang, probably the best American fighter in WW2, which was used with great success by many Greek American pilots. Worthy of note is that many of their training officers were Greek Americans because the young cadets felt better with them, as they had common ethnicity and many of them spoke Greek also. The Mustang now was known as F-51D as the prefix ‘P’ for Pursuit was substituted by the ‘F’ for Fighter. Most of the cadets flew direct solo on the F-51D, while if needed some did flights with the Piggy Back Mustangs were the trainer sit at a rudimentary seat behind the pilot. During their training, the RHAF cadets detached for one and a half month to Nellis AFB in Nevada where they were trained in the ground strike and close air support missions. The Greeks logged around 120 flight hours in the F-51D’s.

The AT-6Ds Texans like the 44-80959 of 2532 Air Force Base Unit, were the aeroplanes in which the Royal Hellenic Air Force cadets flew their advanced training in Randolph Air Force Base, in San Antonio, Texas, where they were trained their USAF colleagues of 49A-Class. The profile is based upon the excellent LIFE photos, regarding RHAF personnel training in the United States (Copyright Gaetan Marie)

"On a flight with Mustangs, while we operated from the Williams AFB, our classmate George Plavoukos was found himself starring the Pacific Ocean. We were on a rendezvous exercise, and our training officer took me from the first point of rendezvous and Politis from the second. When we reached the third point that we were supposed to get Plavoukos, he did not show up but told us he would be there in a few minutes. After making a few turns, the training officer ordered us to be headed for the Williams AFB and to tell Plavoukos to do the same, when he reached the rendezvous point. When Plavoukos arrived at this point he set out to meet us and increased his engine speed. After a while, he lost contact with us and later he saw the Pacific Ocean! Then he realized that at the rendezvous point he had taken the opposite course from what he had to take (which we noted on our map if necessary). Eventually, he turned back and landed in a small airfield where he found that his fuels were enough to return to our base. The Mustang had internal fuel of 252 gallons while the Spitfire which had exactly the same engine had only 92 gallons and that, of course, allowed Mustang to accompany the bombers during WWII. Plavoukos decided not to take off again, because he knew that if he had successfully returned to his base, the Americans, under a regulation that existed, would cut him. Instead, he waited until a piggyback Mustang brought him back to Williams AFB and continued his training."

Unfortunately In 1949, while the 21-B class operated in Williams AFB, Greeks mourned their first loss. Icarus Lampiris, who found dead inside his Mustang when he crashed during the take-off. As in Randolph AFB, the RHAF students were flying the same aircraft as their American colleagues. The Mustangs were painted silver on all surfaces with the standard Star & Bar painted on each side of the fuselage and on the wings. Like the T-6, they had the distinctive USAF serial number in the vertical surface and the rudder, while the last three digits of the serial were repeated on each side of the fuselage with the ‘FF’ prefix before them. The combination of the identification prefix and the last numbers of the serial was known as the ‘Buzz Number’. One of the Mustangs used by Greek pilots was the FF-548 and PF-473. Eighteen pilots graduated successfully and proudly wear the USAF Silver Wings on their chest, according to the Order for February 23, 1949, their names presenting in the table below. Their graduation degrees were presented to the young Greeks by the Governor of Arizona. The 21-B Class returned to Greece during the Easter of 1949 while the 21A-Class was still training in the air to air and air to ground firing with their Harvard’s. The aviation cadets of the whole 21 Class took their oath in the early days of July 1949 and most of its pilots were posted for duty in RHAF Spitfire squadrons. The great effort which was put up by these young cadets, either they successfully earned their wing or not, must be emphasized, as they overcome the difficulties of the language, the different way of thinking and training, as well as the actual flight training stress, and ‘advertise’ RHAF capabilities in their great ally, USAF and the United States.

· 63% of the 51 cadets were washed out, a far cry from the only 3% of the 21A Class which was trained in Greece. The USAF training standards were high and RHAF training methods would be changed soon.

· The 21-B class had only one (2%) fatal accident instead of four (16%) of the 21A-Class. The main reason for this was that in Greece, RHAF cadets and pilots often flew very low altitude flights. During the training, USAF didn’t allow flights under 1.000ft unless the airplane was on a landing phase. 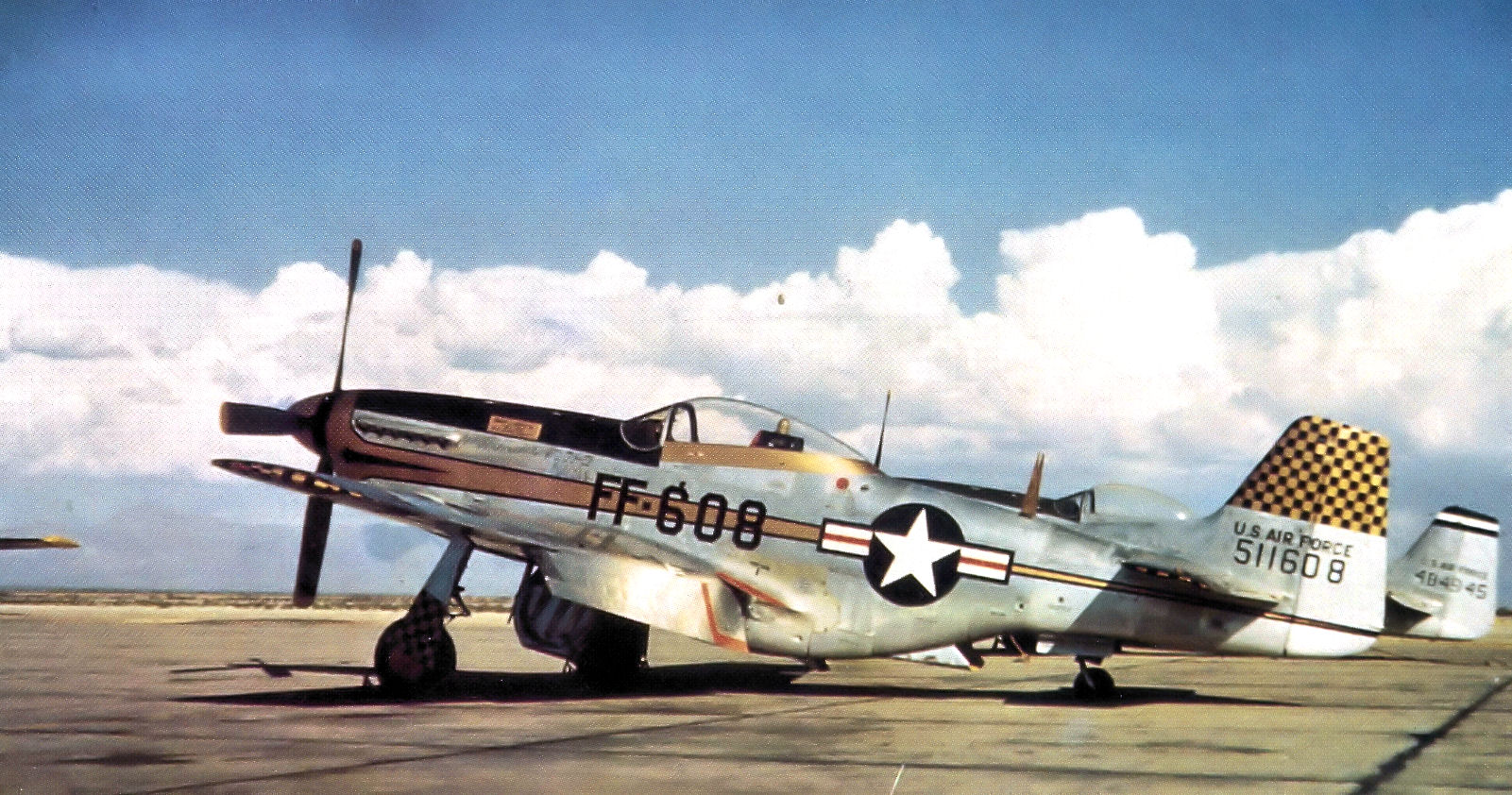 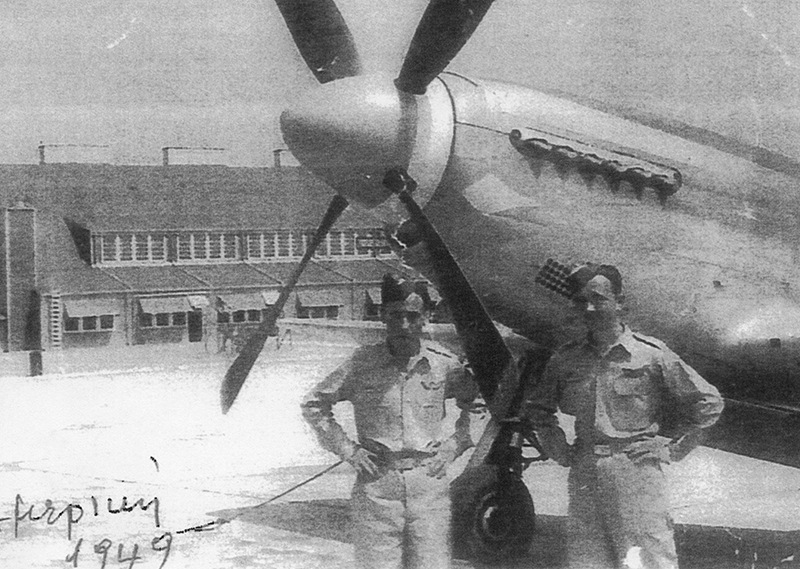 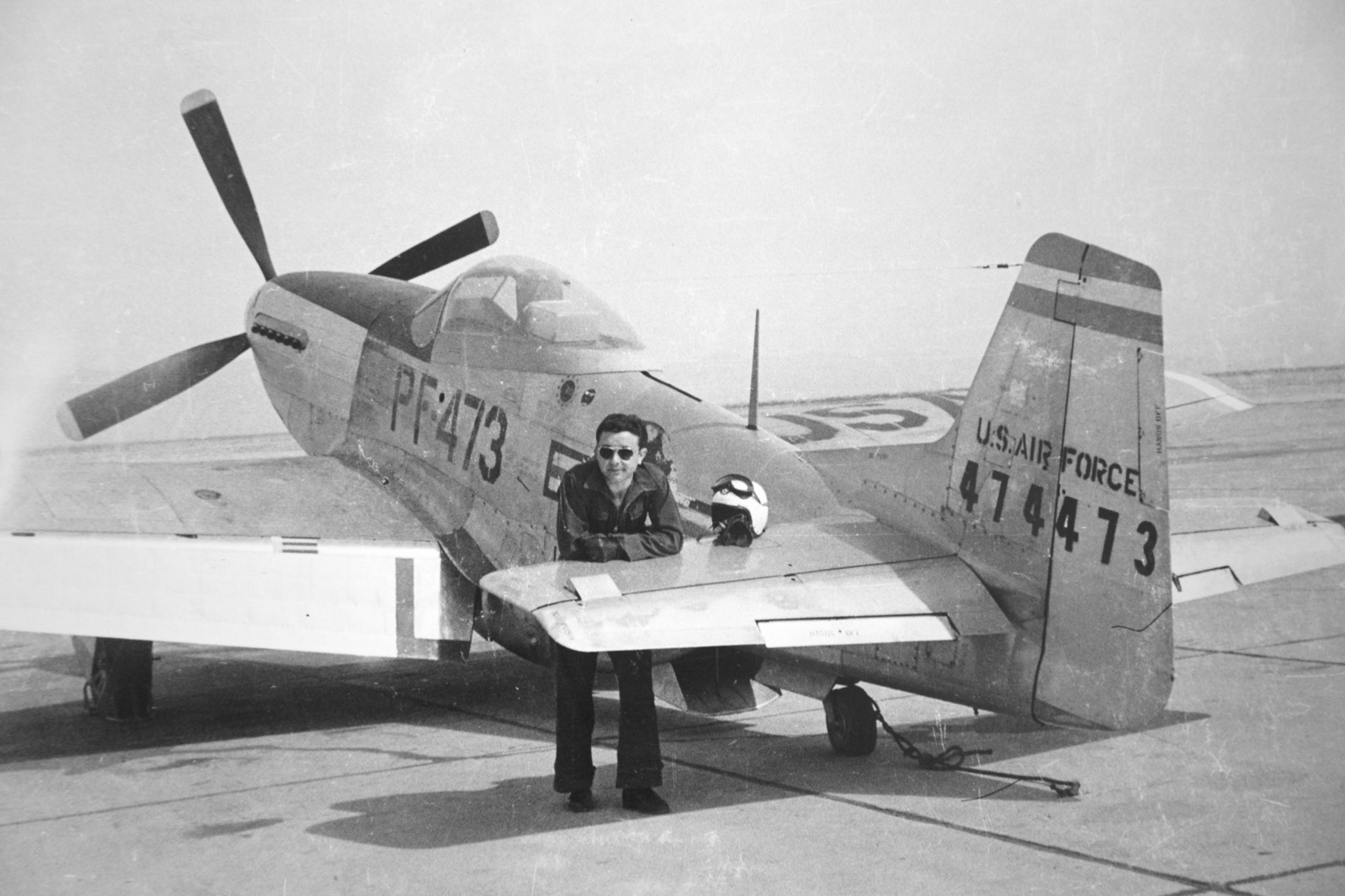 The F-51 Mustang was a new breed for the Royal Hellenic Air Force cadets and pilots in general. However except the two RHAF Classes which trained in the US and a large number of Greek Americans who flew it in WW2 and the Korean War, few know that the RHAF actually operated the Mustang in reconnaissance missions over the Iron Curtain which laid on the Northern borders of Greece (Greek readers can check Kiriakos Paloulian article: RHAF P-51 Mustang secret missions). Recon F-51s / F6Ds with no markings and Greek pilots frequently made runs over Albanian and Bulgarian targets. This Mustang is the one in which Othon Papadimitriou photographed (check photo above). It is the F-51D-30-NA, 44-74473. It was delivered in 1945 specifically to USAAF 339th CCTS. In 1950 it was used by USAF 3595th Pilot Training Wing at Nellis AFB. On August 28, 1950, it had an accident at 10 Miles north of Indian Springs with pilot Elzeard J. Deschamps at the controls. It was later converted to TF-51D and served with 3615th Pilot Training Wing Craig AFB. On November 14, 1952, it crashed near Craig AFB, AL after a collision with F-51D 44-84883 while flown by Erik S. Sorrinsen. The canopy looks like Dallas 1 type although it isn't 100% sure. There is an AN/APS-13 unit on fin but no aerials and doesn't have a gunsight The USAF markings are probably present beneath port wing Unusual serial lettering The fin and wingtip bands are black/white. The anti-glare panel is black and looks much darker. so the bands are probably red/white. If someone looks at the red bar in the US roundel, the shade looks identical. (Profile and further information by Copyright Gaetan Marie and Kyriakos Paloulian)

In the photos above aviation cadet, Othon Papadimitriou poses in a strict aviator pose, in front of a Fighter School Demonstration team P-80. The 'Acrojets' aerobatic display team, as it was called, formed in June 1948 from within the USAF Fighter School at Williams Air Force Base in Arizona. Their first performance was at the Fighter School graduation class in 1948. The team is significant for being the first official demonstration team of USAF, the first demonstration team after World War II, and the first which flew jets, four Lockheed F-80A Shooting Star. 'Acrojets' later transitioned to the F-80C and finally to the T-33. This photo shows also the future of the RHAF, which received her first jets, specifically Lockheed Martin T-33s on September 21, 1951, with the delivery of the training aircraft at Elefsis Air Base (Photo by Othon Papadimitriou family archives and Profile copyright by Gaetan Marie) 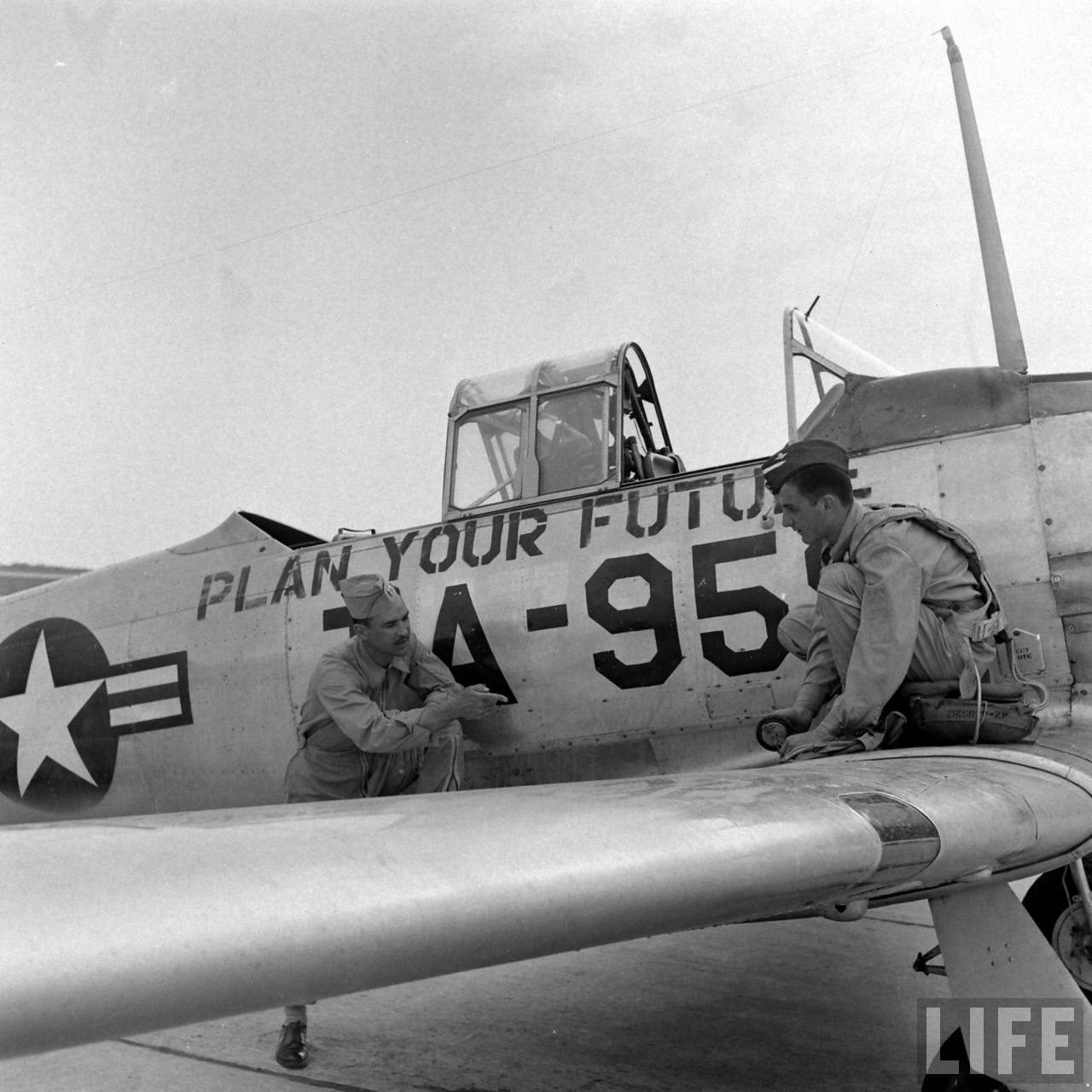 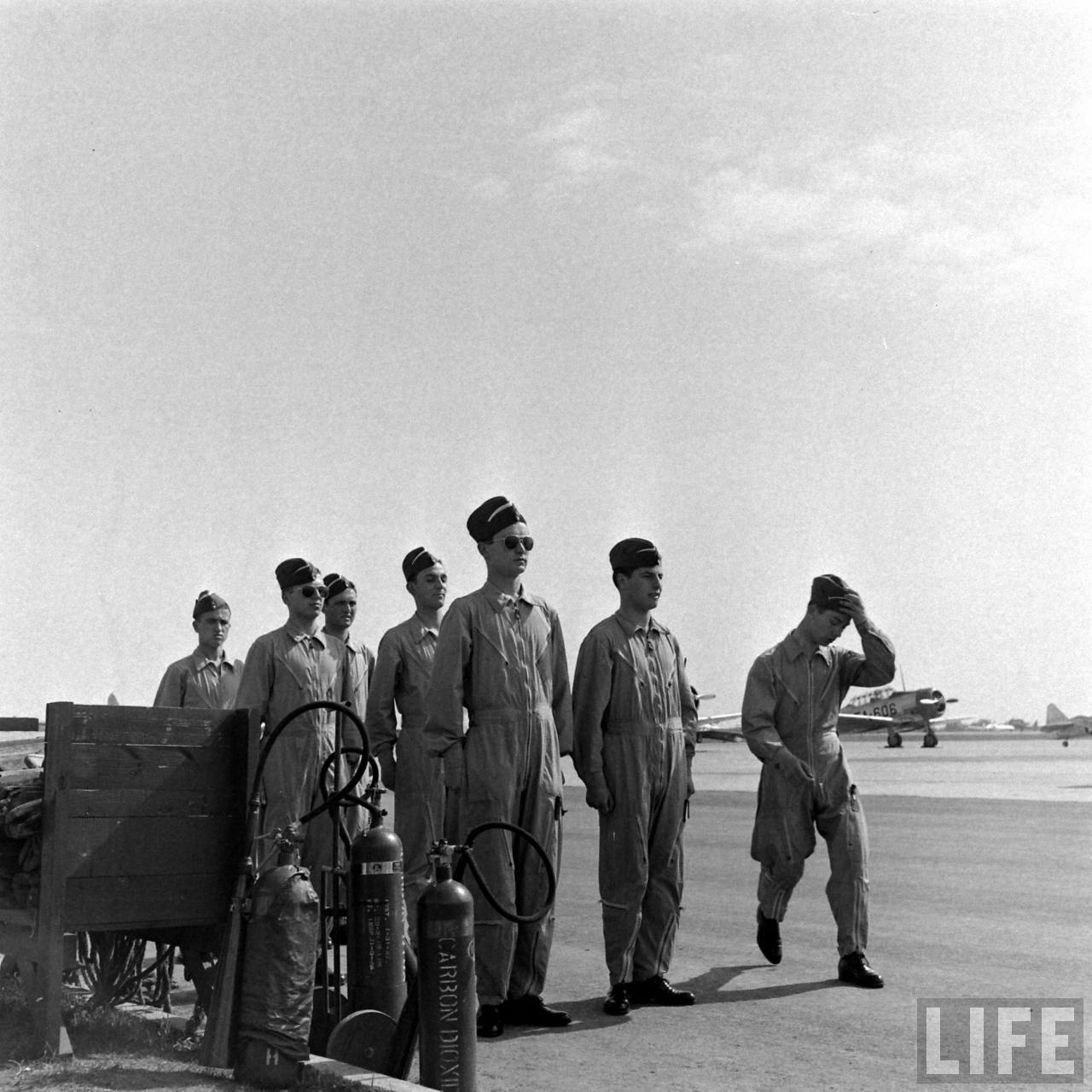 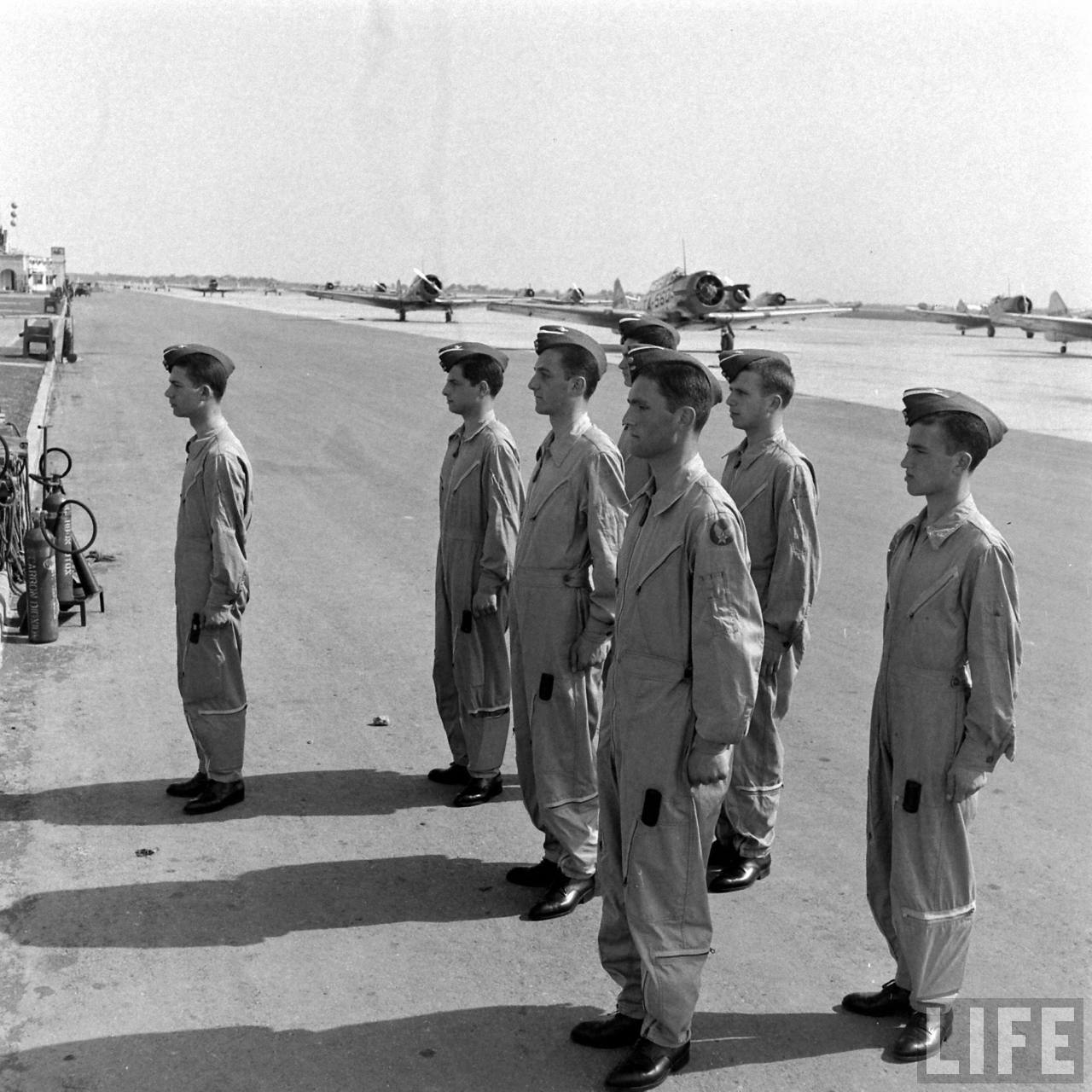 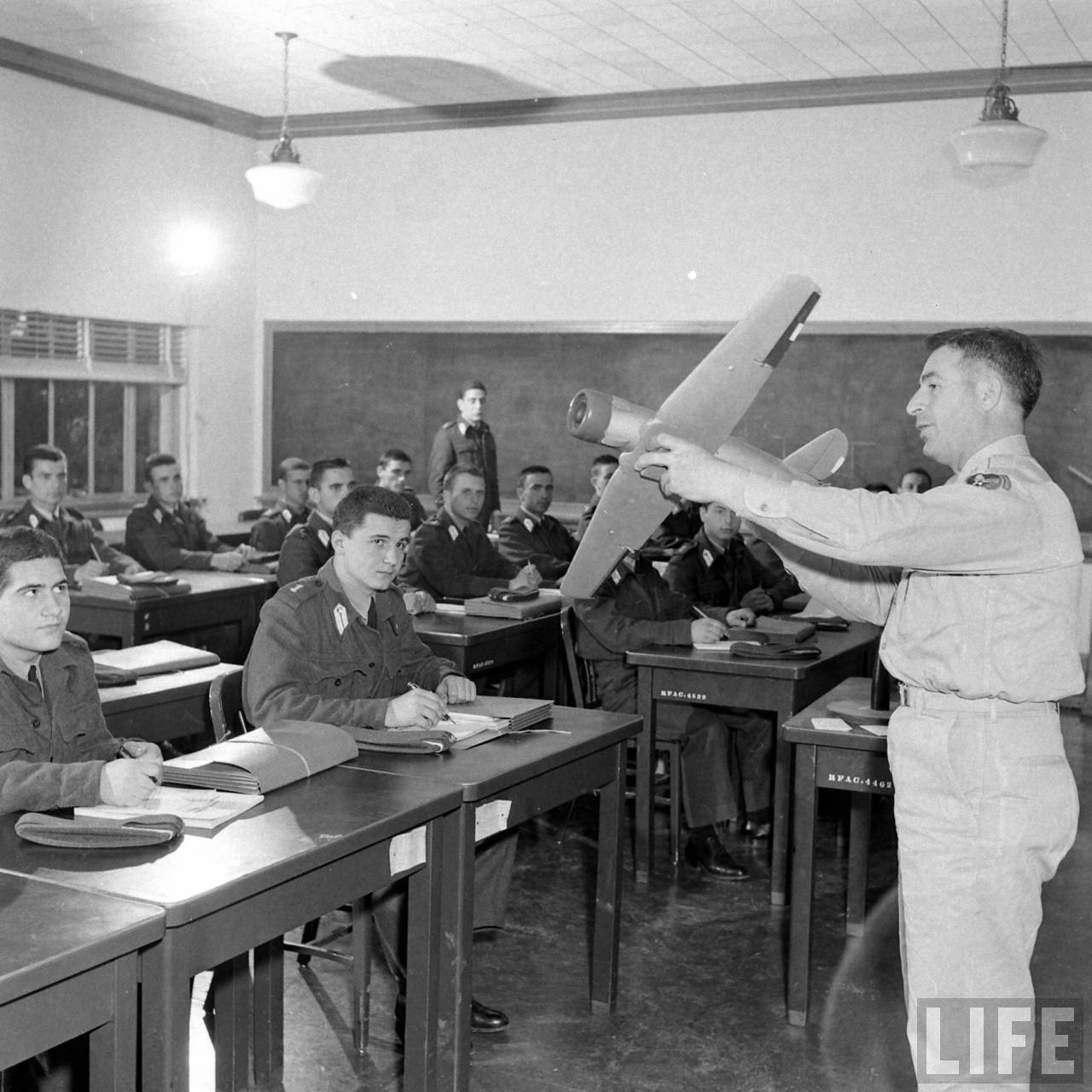 Aviation Cadets (Ikarus) their USAF Greek American Training Officer, Angelo J. Boutselis. In the front row from left to right are cadets Garyfalakis, Agorastos, and Tsamousopulos. On the second row are Tsasakos, Kiosis, and Alevras far right. In the third row are cadets Paterrakis, Delfos and Keramianidis while on the last desk Ikaros Tsogas seated alone. 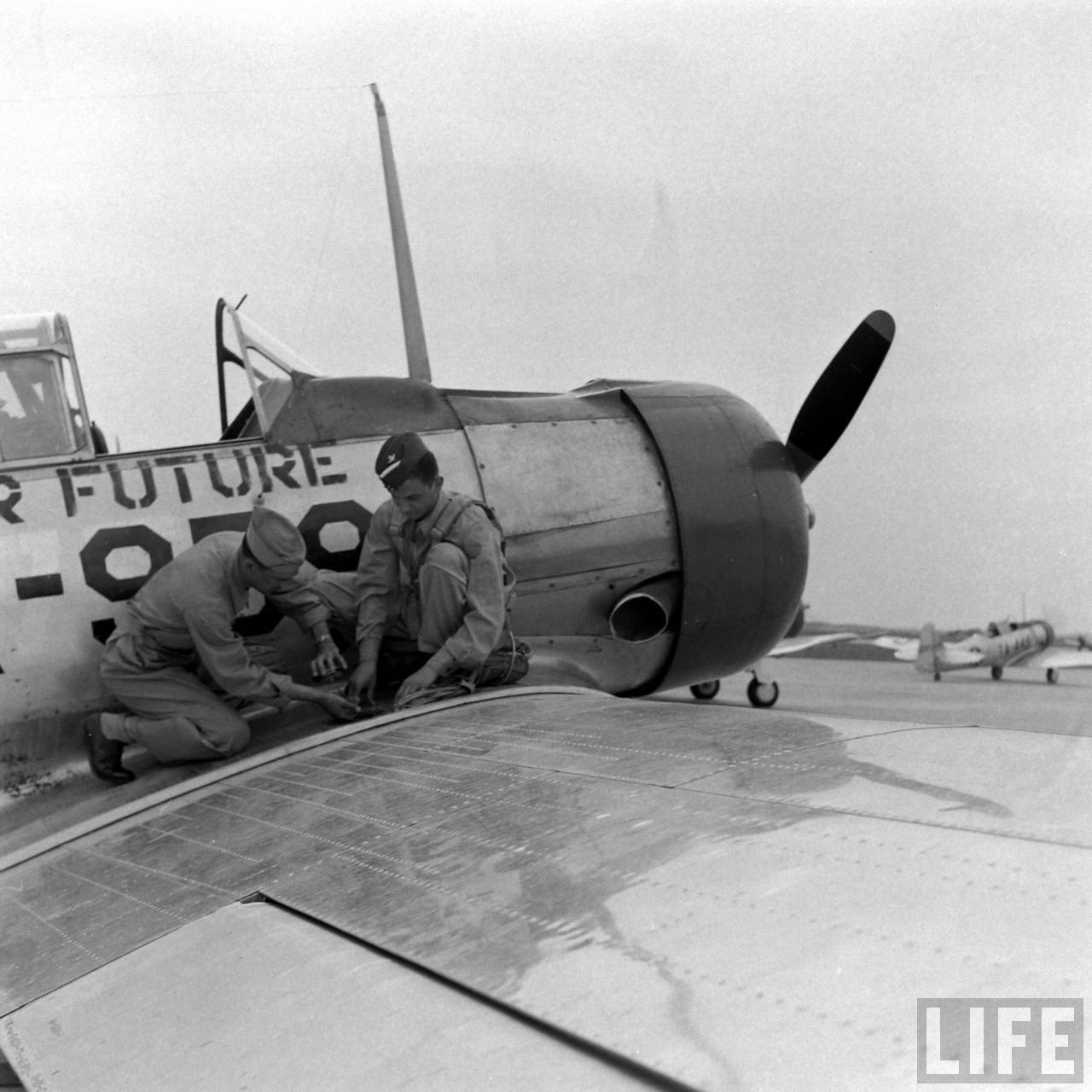 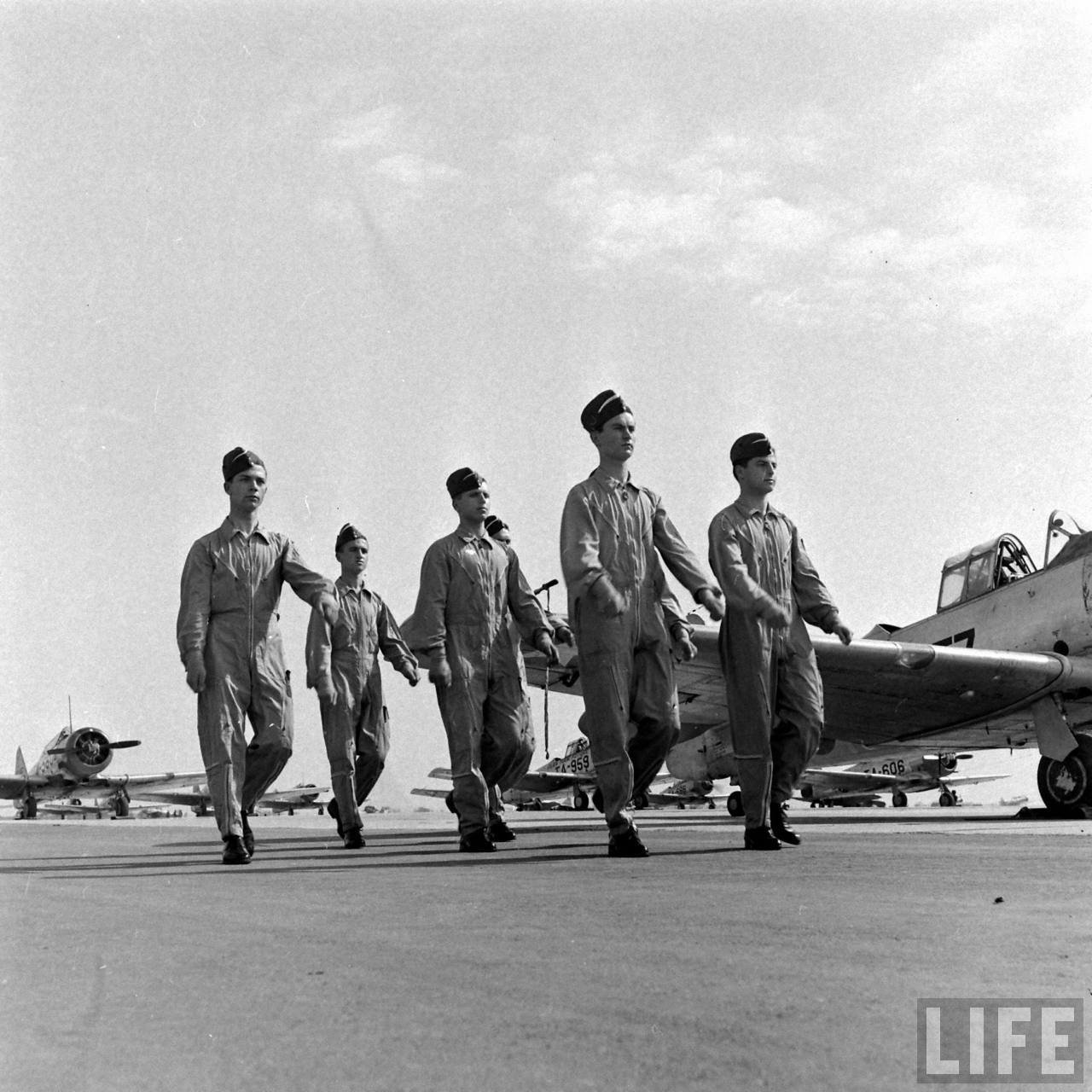 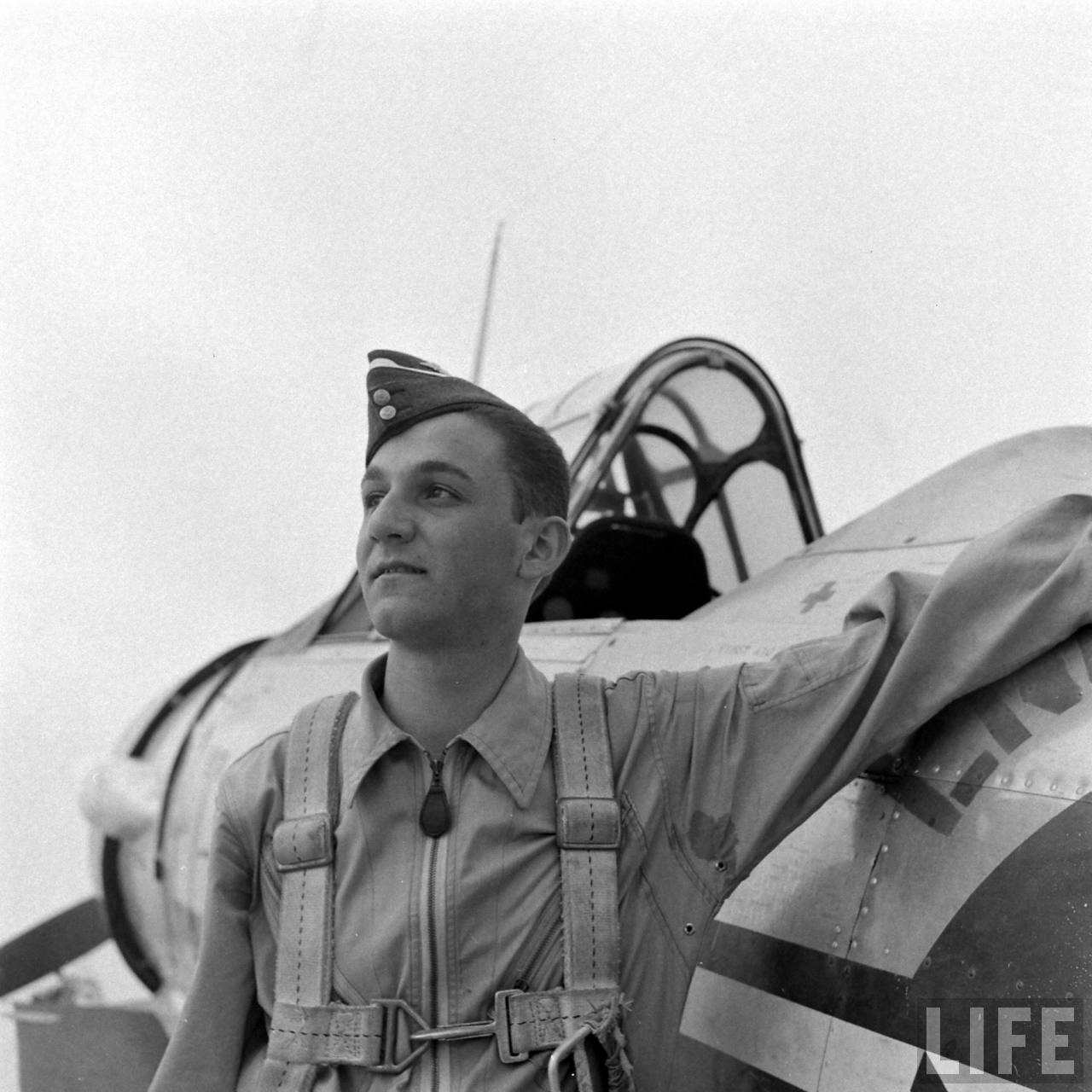 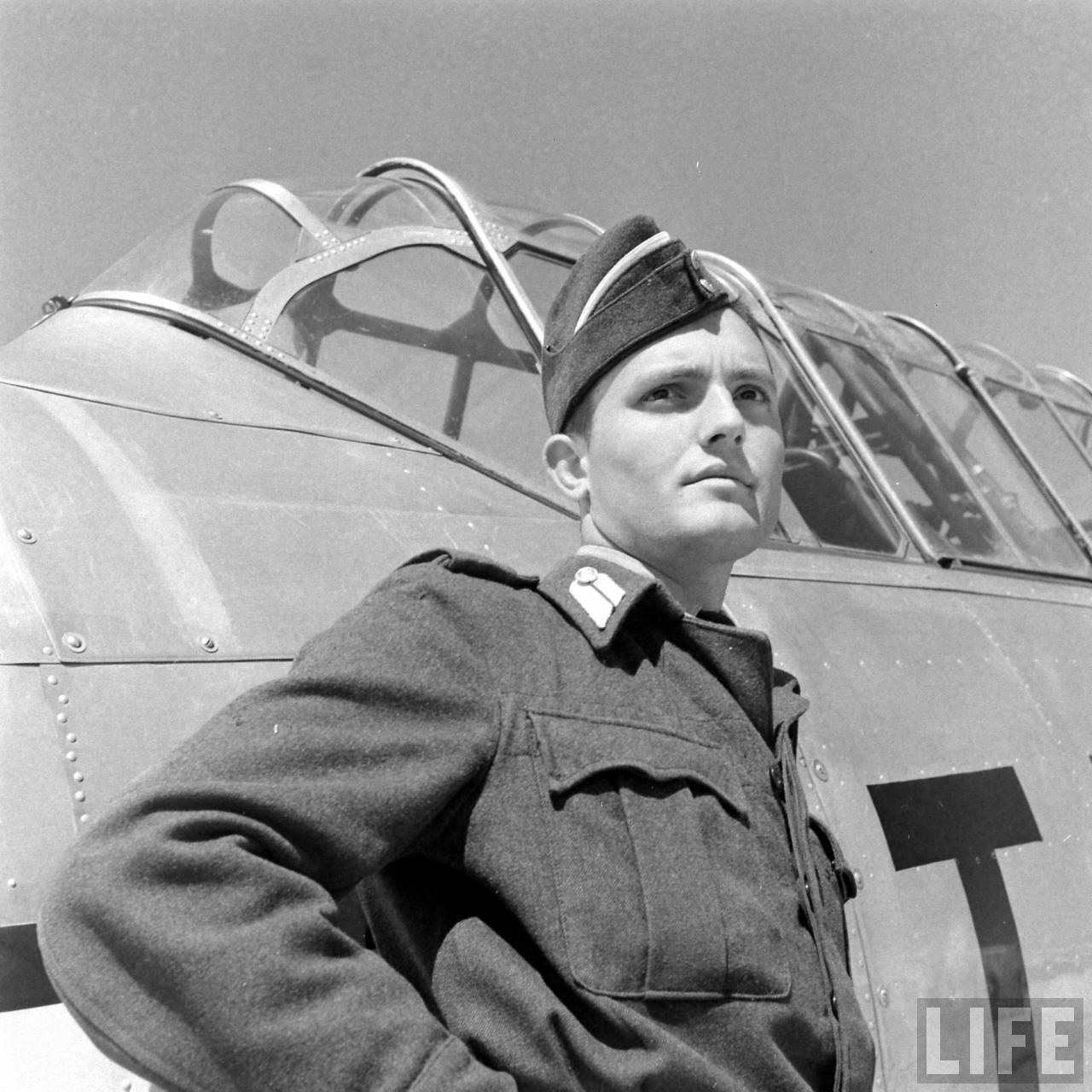 Aviation Cadet (Ikarus) Volikas poses with the AT-6 Texan behind him serving as background. 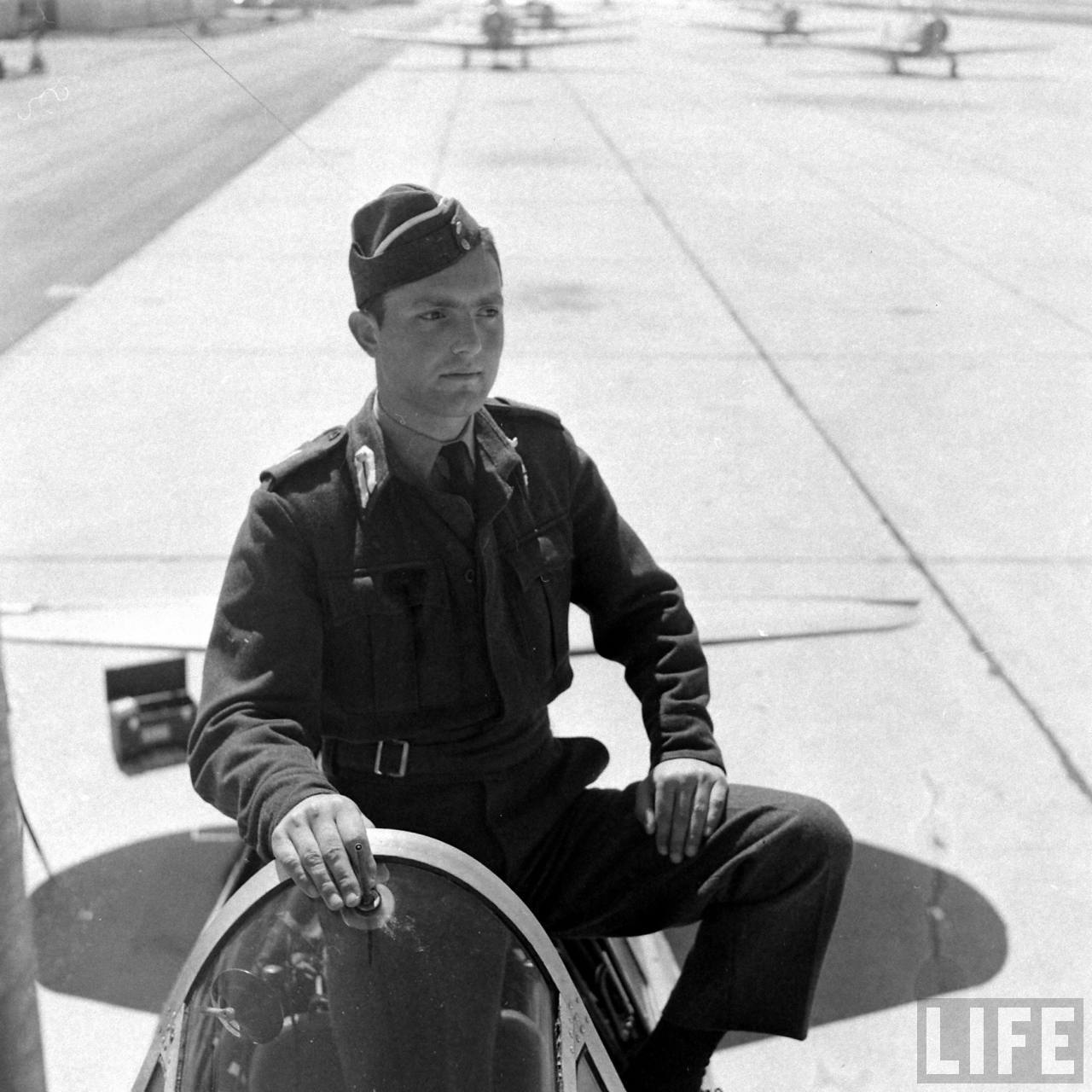 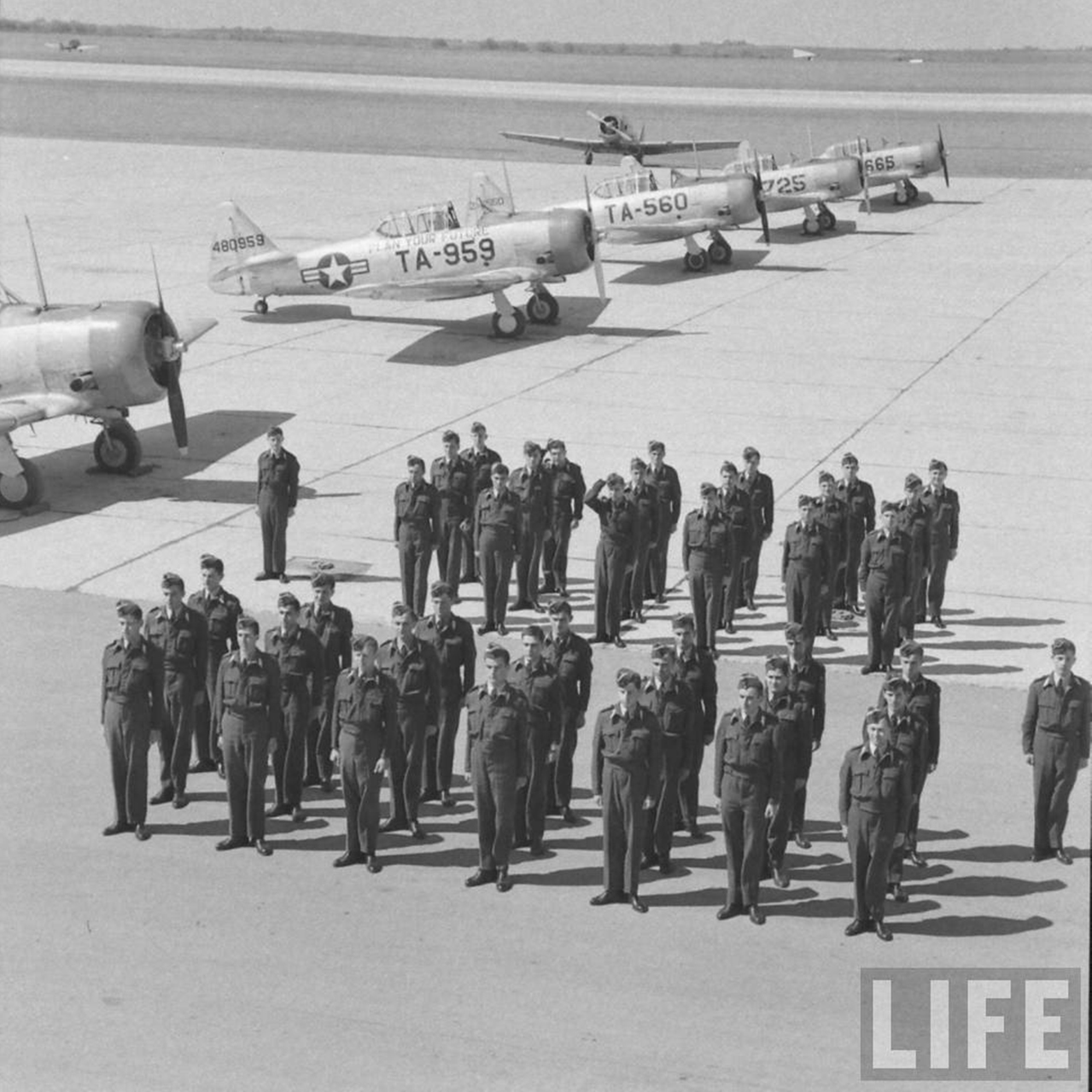 RHAF Aviation Cadet (Ikarus) of 21-B Class, during an inspection in front of their Texans. 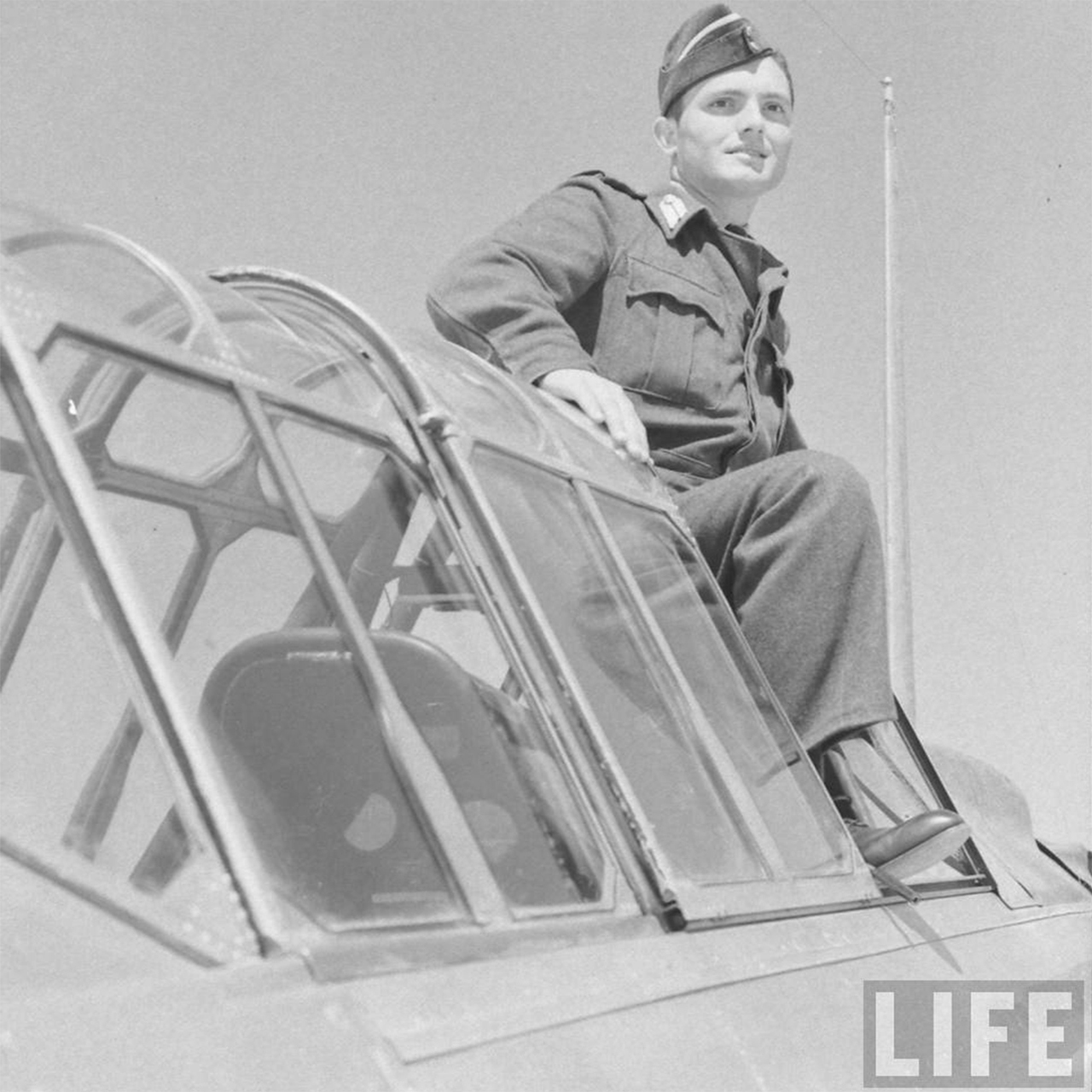 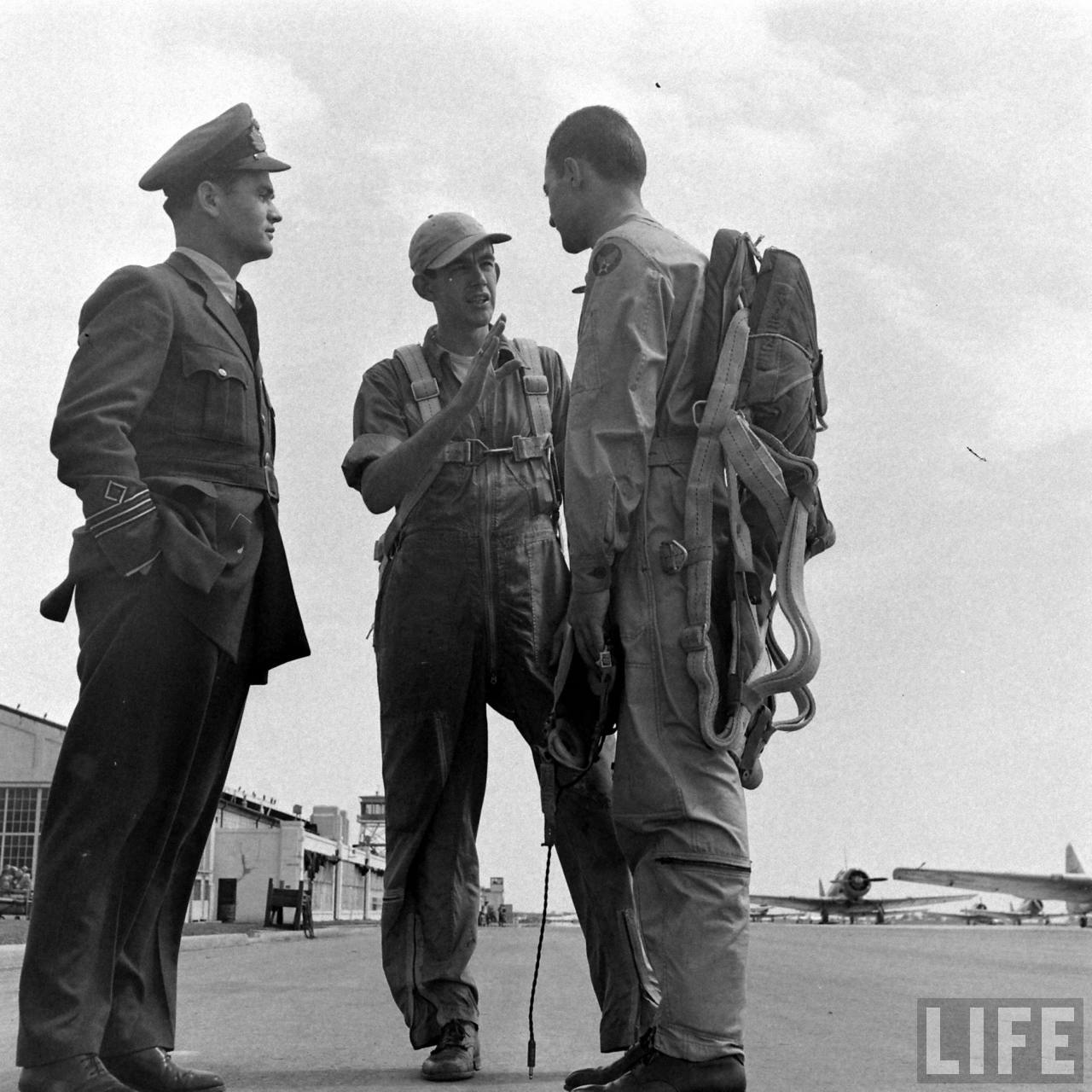 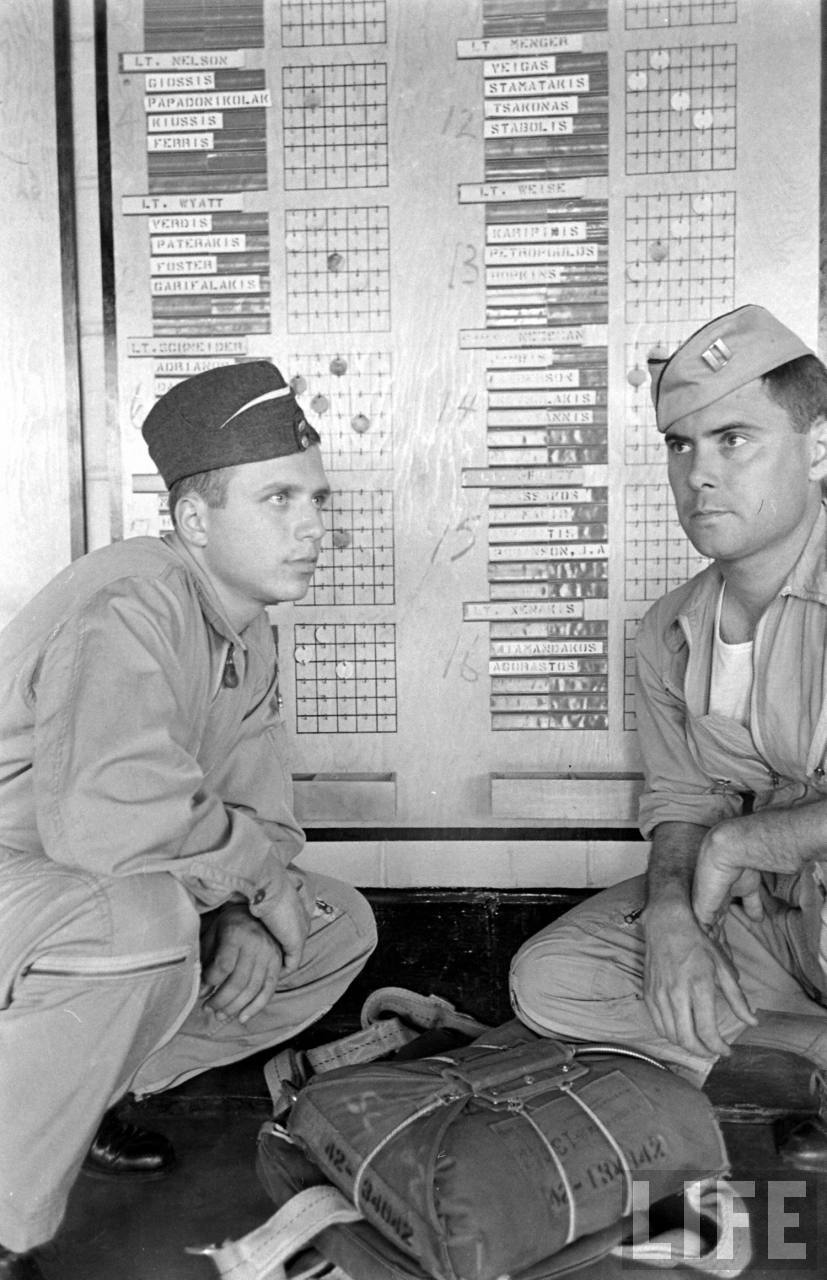 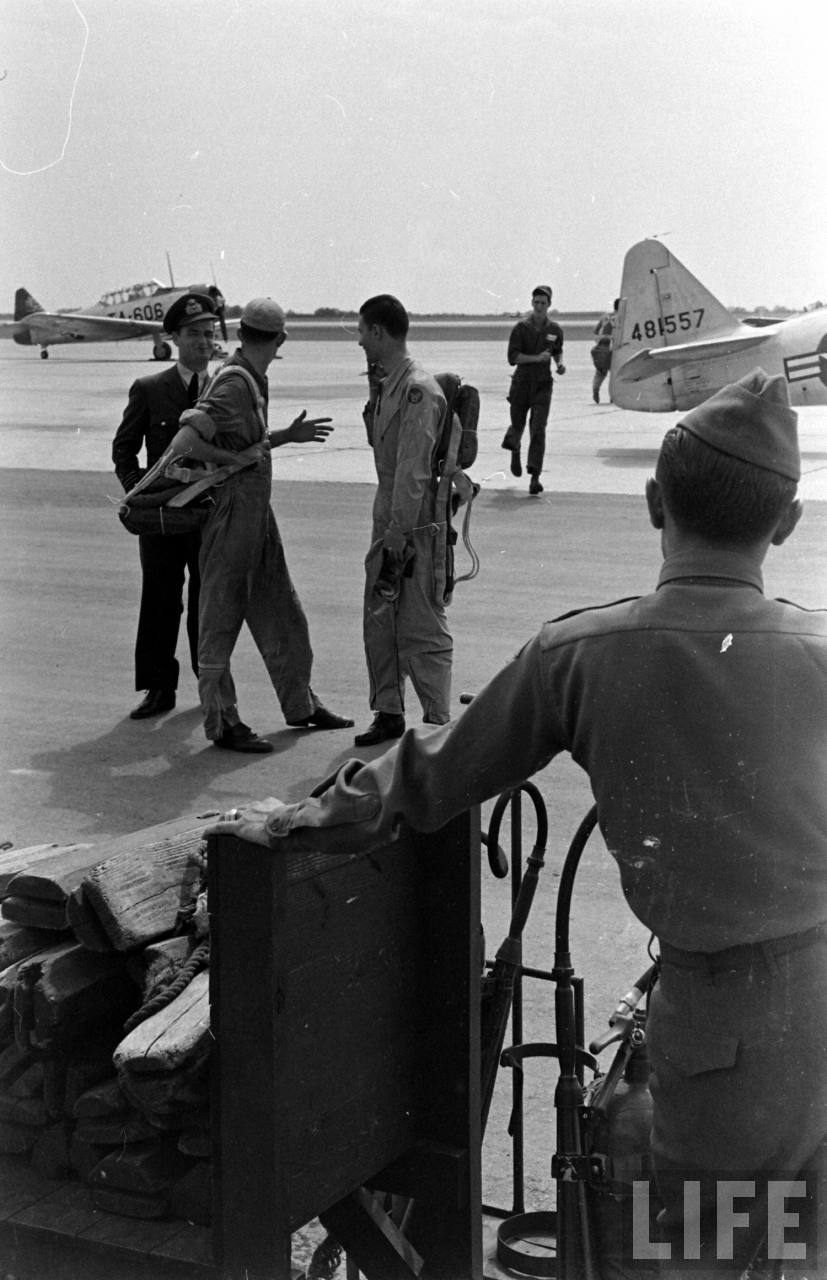 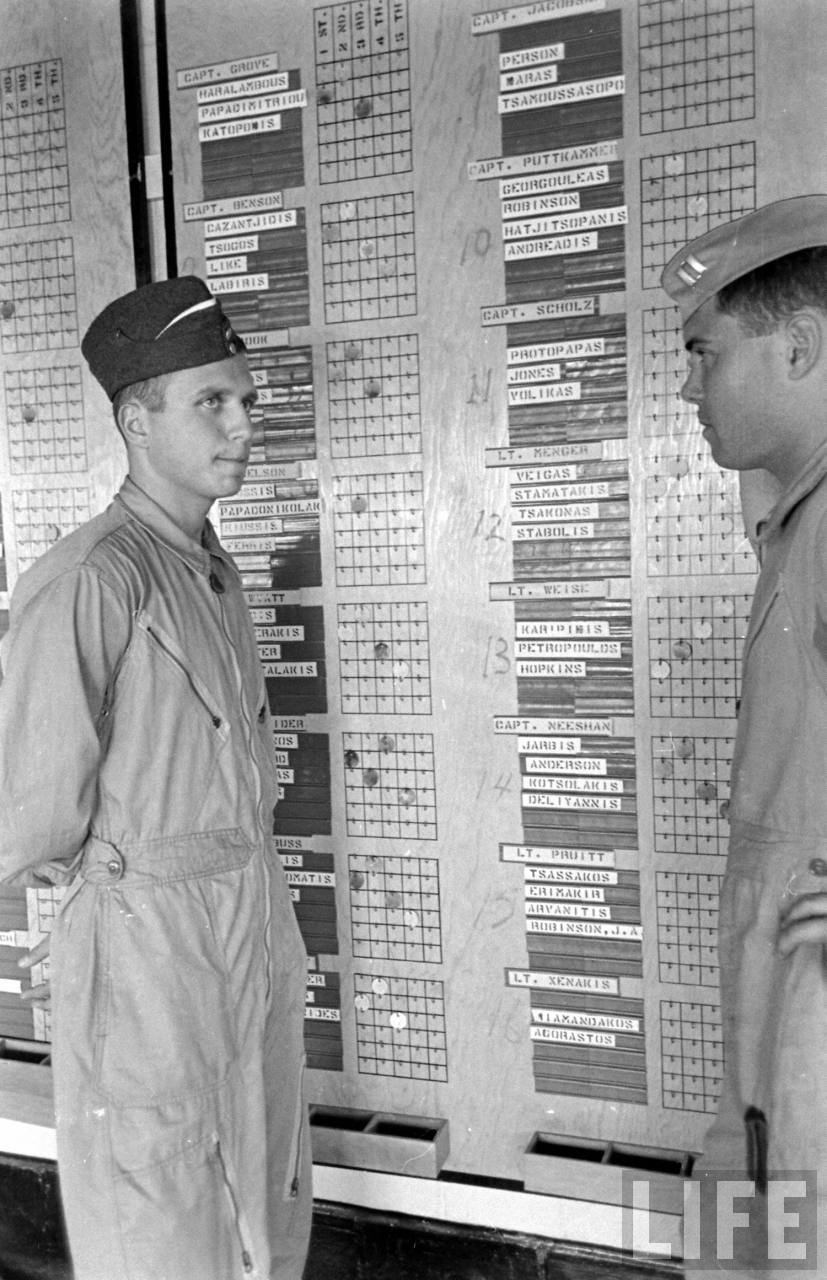 Themis Vranas for his research

Dimitris Bokis, from Othon Papadimitriou family for letting us search in family archives

Anestis Michalakopoulos for bringing to our attention the P-51D-30-NA, 44-74473, photo with Othon Papadimitriou