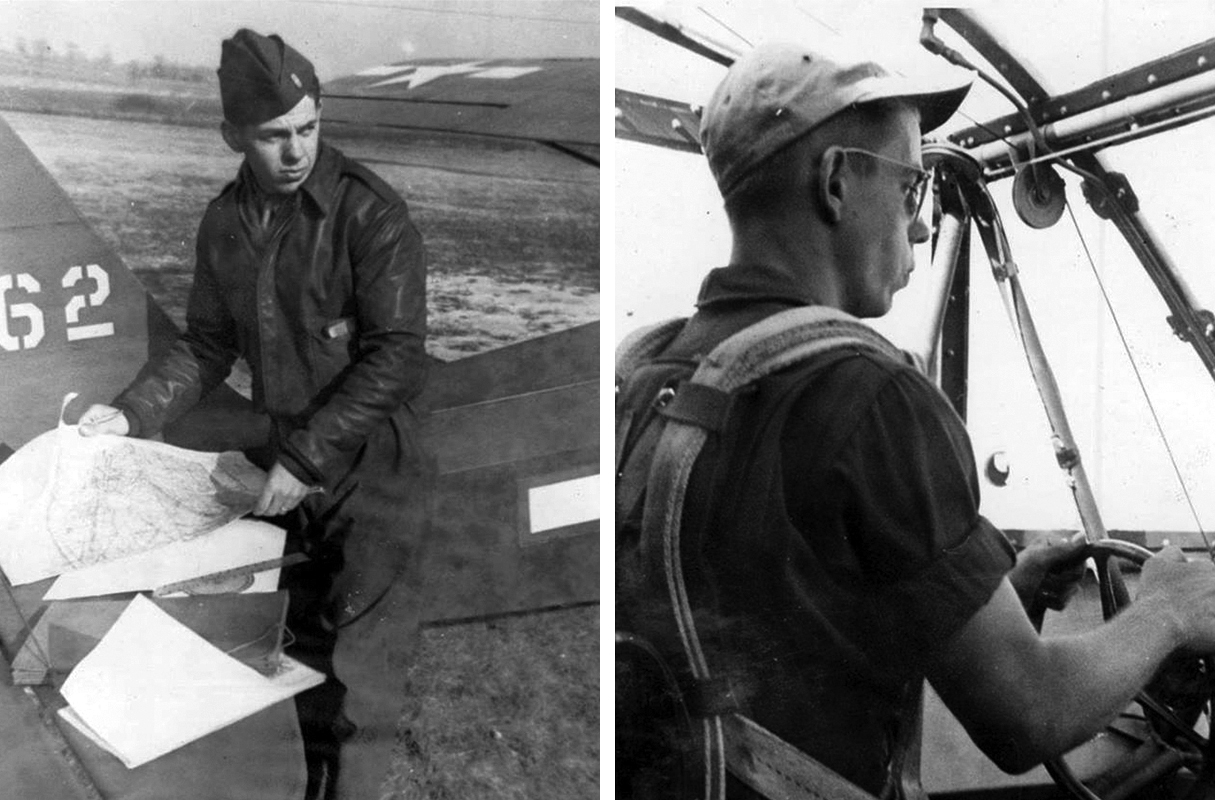 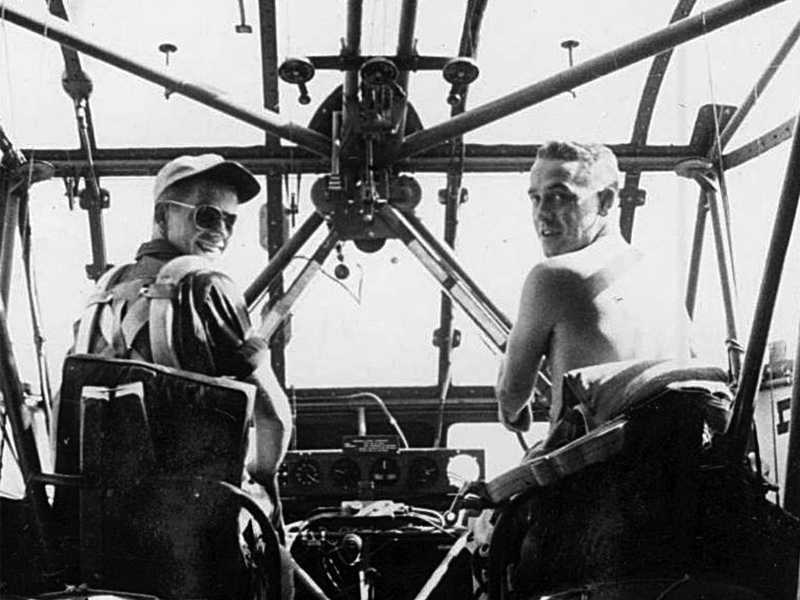 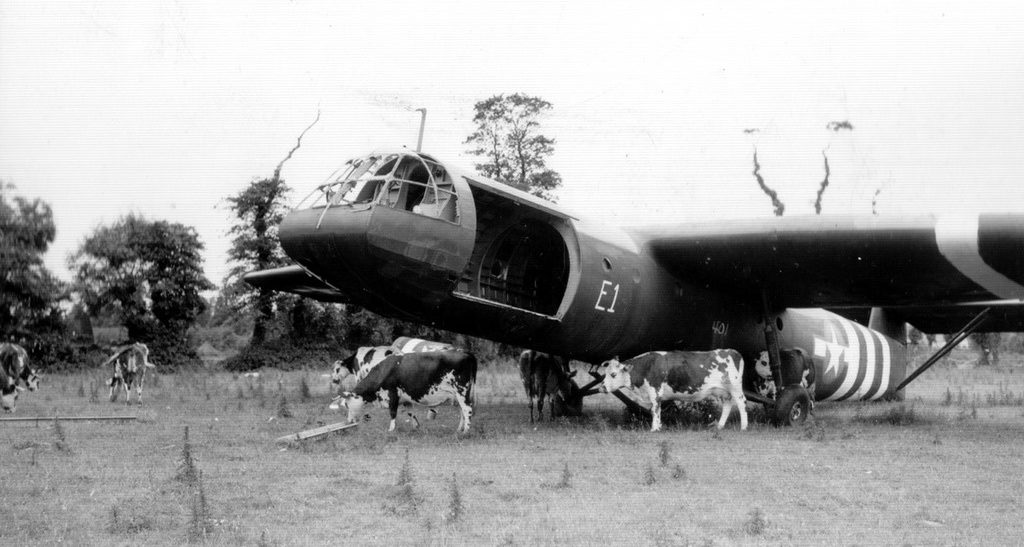 Above Right: Jimmy at the controls of a Waco CG-4A glider. (Thomas Dmitri Archive)

Middle: Jimmy and his copilot. Worth to note this glider is equipped with an SCR585B radio set and the Radio Control Box BC-722 box with the "pull to talk" button can be seen between pilots. (Thomas Dmitri Archive)

Below: A Horsa glider with USAAF markings, somewhere in Normandy, France during the airborne landings of Operation Overlord. (American Air Museum in Britain UP20349)

Jimmy G. Metchicas was the son of Greek immigrants couple and was born on April 10, 1921, in Newberry, South Carolina. His father Gus Metchicas was born in Constantinople, Turkey and his mother Evriklia Kehayas (Kehagia) was born in Alexandroupolis, Thrace, Greece. Gus emigrated to the United States of America around 1910. The Greek couple was married on June 21, 1920, in the Greek church of New York City, with the presence of fifty witnesses of its nationality. Most of the guests, including the 19 years old bride, departed from the port of Patras and arrived in the United States, on June 7, 1920, two weeks before the wedding ceremony, traveling for about 15 days, with the transatlantic passenger steamship, RMS Pannonia. After their wedding, Gus and Evriklia moved in Newberry, were Gus co-operated a candy shop, with his brother-in-law, Mr. John Kehayes, that named “Washington Kandy Kitchen”. (Washington was the name of the road in which the candy shop opened). A few years later, in 1926, Gus and Evriklia moved to Greenville, South Carolina, where they opened a restaurant. Besides Jimmie, they had also two daughters, Carrie and Anastasia. Unfortunately, Evriklia died suddenly on September 6, 1942, after she had been ill for only several hours! Several years later Gus married again, this time with Eva Godley Metchicas. He died on December 22, 1955. During his teenage years, Jimmie was an aviation enthusiast, he liked airplanes and loved the idea of flight. The young Greek-American was very popular between his friends and as a result, they elected him as the secretary of the youthful aerial club based at Greenville. Also, he was an avid aeromodeller and in August of 1938, participated in the first gas model plane meet, that organized in the Greenville’s municipal airport in South Carolina. Approximately 40 model airplanes were entered in this contest and the young Jimmie Metchicas took the second place. Prior to entering service, he was employed by the Busy Bee Cafe and the National Advisory of Civil Aeronautics at Langley Field, VA. He took the Civilian Pilot Training Program (CPTP) in 1942 and he volunteered for the Army Air Force. He graduated as a glider pilot from South Plains Army Flying School at Lubbock, Texas in 1943 (serial number T-122716). At the graduation ceremony, he was presented with his sterling silver “G” wings and promoted to Flight Officer (F/O), a wartime rank equivalent to the Army’s Warrant officer, junior grade. After the completion of his advanced glider training in March 1943, F/O Metchicas transferred with his classmates to England, in April 1943. In a letter he wrote back to his family in the United States on April 9, 1943, describing his life in England:

"Dear folks, well here I am at last somewhere in England. I don’t know where just yet. I don’t think it is permanent as yet. Let me know how long it takes for this letter to reach you. I had a very nice trip over on the ship. We traveled in a very good style. I enjoyed it very much. I only hope that very soon I can be making the return trip. I received a pop’s letter on the ship. We were received very well here. Everything seems to have a good system. I like the country very well. It is very pretty. I hope that I can see more of it soon. I think the possibilities are good. I'll try to send you a longer letter soon. Isn’t this a hell of a way for me to spend this Easter? And tomorrow is my birthday too. Well, let me hear from you soon. As always - yo boys. Give my regards to all."

Because of his early post for overseas duty, more than a year before the -Day in Normandy, there is a possibility that Jimmy took part and obviously survived Operation 'Husky' in Italy, before coming back to England and prepare for Operation 'Overlord'. At the end of 1943, the Greek American pilot assigned to the 88th Troop Carrier Squadron, 438th Troop Carrier Group, 53rd Troop Carrier Wing, IX Troop Carrier Command operating on the European Theater of Operation. From March 1944 he was stationed at Greenham Common in England and his Troop Carrier Group, the 438th, led the Air Armada for the air assault on Normandy on 6 June 1944 (D-Day). However, there were six glider missions for the Normandy campaign, and Jimmy was sent on detached service to the 434th at Aldermaster airfield to fly a glider for the 'Keokuk' mission. Before D-Day Jimmy wrote his will and appointed his father Gus and his wife, Letha Mae Metchicas, as beneficiaries. Jimmie and Letha were married he was sent overseas. In the fateful mission of 6 June 1944, F/O Metchicas flew one of the 32 Airspeed AS.51 Horsa Gliders to Landing Zone 'E'. He flew with 2nd Lt. Luther G. Lau and his tow plane commanded by Maj. Parkinson. The 32 Horsa's carried 157 men, Signal, Medical & Staff pers., 40 vehicles, 6 guns, 19 tons of equipment and supplies. They landed at 21:00 hours.

The first two prototypes were built at Salisbury Hall (famously known as the birthplace of the DH Mosquito) and first flown (prototype DG597) from Fairey Aviation’s aerodrome at Harmondsworth on 12th September 1941, towed behind an Armstrong Whitworth Whitley. Five additional prototypes were assembled and flown later at Airspeed, Portsmouth. Allocated the designation AS.51, around 3,800 Horsa assault gliders were built, 695 of these at Christchurch, with the type, also being widely subcontracted. Production of the AS51 Horsa I comprised 470 at Christchurch, 300 by Austin Motors, and 1,461 by a production group coordinated by Harris Lebus Ltd. The potential production of a further 400 being produced in India was investigated but abandoned as the cost of importing the necessary wood became cost-prohibitive. Seating up to 30 troops, the Horsa was much bigger than its U.S. contemporary (the Waco CG-4A) which had a capacity of just 12. Additionally, the Horsa had the flexibility to carry a Jeep of even a 6-pounder anti-tank gun. By far the most famous sortie carried out by six Horsa Gliders was the delivery of the Paratroopers responsible for securing the bridge at Bénouville over the Caen Canal in Normandy (now known as Pegasus Bridge) during Operation Deadstick on the evening of 5th June 1944, the night before the D-Day landings. The AS.53 Horsa Mk II was designed for vehicle carriage and featured a reinforced floor and a hinged nose section. The Horsa II also featured twin nosewheels and a modified towing strop attachment; all-up weight for this version was increased to 15,750 lb. Production of the Horsa II comprised 65 by Austin Motors and 1,271 by Harris Lebus Ltd. Due to the dispersed manufacturing of the sub-components before final assembly at various RAF Maintainance Units around the UK, it is difficult to accurately identify a final production number but estimates of completed aircraft appear to be between 3,799 and 5,000 units.(Copyright Juanita Franzi further info https://www.baesystems.com/en//en/heritage/airspeed-horsa)

Operation 'Keokuk' (also known as 'Keokuk mission') was the third and final assault of the 101st Airborne Division on June 6, 1944, in Normandy. It was operated chronologically after Operation 'Albany' (paratroopers of the three airborne regiments were dropped at 12:20 am) and Operation 'Chicago' (air transport of reinforcements aboard 52 Waco gliders that arrived at 4:00 am). The objective of Keokuk was to transport by glider, like Chicago, reinforcements in personnel and equipment for the benefit of the isolated parachutists in the Cotentin Peninsula. Indeed, they needed heavy weapons, equipment, and ammunition that could not be parachuted during Operation Albany. The landing of these new air transported reinforcements had been scheduled for Tuesday, June 6 at 9:00 pm on the landing zone (LZ) located on the north-western edge of Hinesville and which was co-located with drop zone 'C' (the latter being for the 1st and 2nd battalions of the 506th Parachute Infantry Regiment and the 3rd battalion of the 501st Parachute Infantry Regiment). The gliders delivered their precious cargo of men and materials to the paratroopers of the 101st Airborne Division before the first night in enemy-occupied territory. Operation 'Keokuk', carried out in broad daylight, had a considerable psychological effect among both German and American troops. The Germans observed their opponents being reinforced by unconventional means thanks to their control of the aerial domain, isolating, even more, their units located between the littoral and the drop zones. Conversely, for the Americans, this demonstration of strength led to an increase in morale before nightfall. The 101st Airborne Division received further strength by the parachuting of new personnel the following day, June 7, 1944, starting at 6 am as part of Operation 'Memphis'. Unfortunately during Operation 'Keokuk', F/O Jimmie Metchicas was killed, however, the circumstances of his death are not clear yet. Regarding the 88th Troop Carrier Squadron Monthly Report, June 1944 we can read:

"Twelve glider pilots from this squadron were placed on temporary duty with other troop carrier groups... These men participated in the glider mission over France on ‘D’ Day in much the same fashion as did our men. After their evacuation from the continent, they were granted four-day leaves before reporting back to the 88th...Of this group of twelve, F/O Richard S. Myers, T-123428 and F/O Jimmy G. Metchikas, T-122716 were reported killed in action...”

Thomas Dimitri, Jimmy's nephew, said that he heard two stories regarding how Jimmy was killed;

"My dad...said, Jim was killed by a sniper. But as a kid I seem to recall a letter from Jimmy’s CO who said that his flight ran into heavy 20 mm at the drop zone, killing him."

Also, it is worthy to note that the co-pilot of Jimmie Metchicas, 2nd Lt. Luther C 'Sonny' Lau, reported as Missing In Action on June 6, 1944, but later his status changed to Prisoner Of War. His personal belongings were transferred to the United States and handed over to his family in April 1945. His remains transferred from Europe to the United States on July 12, 1949, and buried in Rosemont Cemetery, South Carolina the next day.

May his memory be eternal.

Above: Jimmy and Letha's wedding at the post chapel. (Thomas Dmitri Archive) 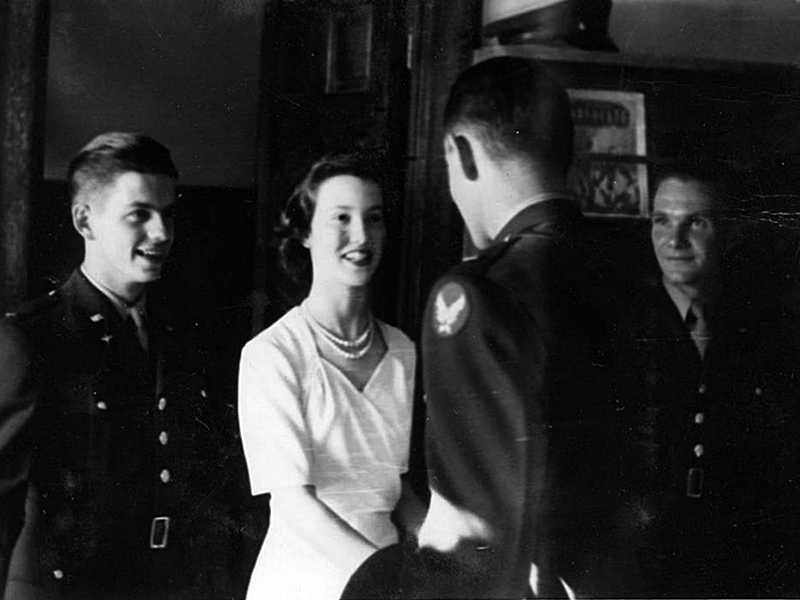 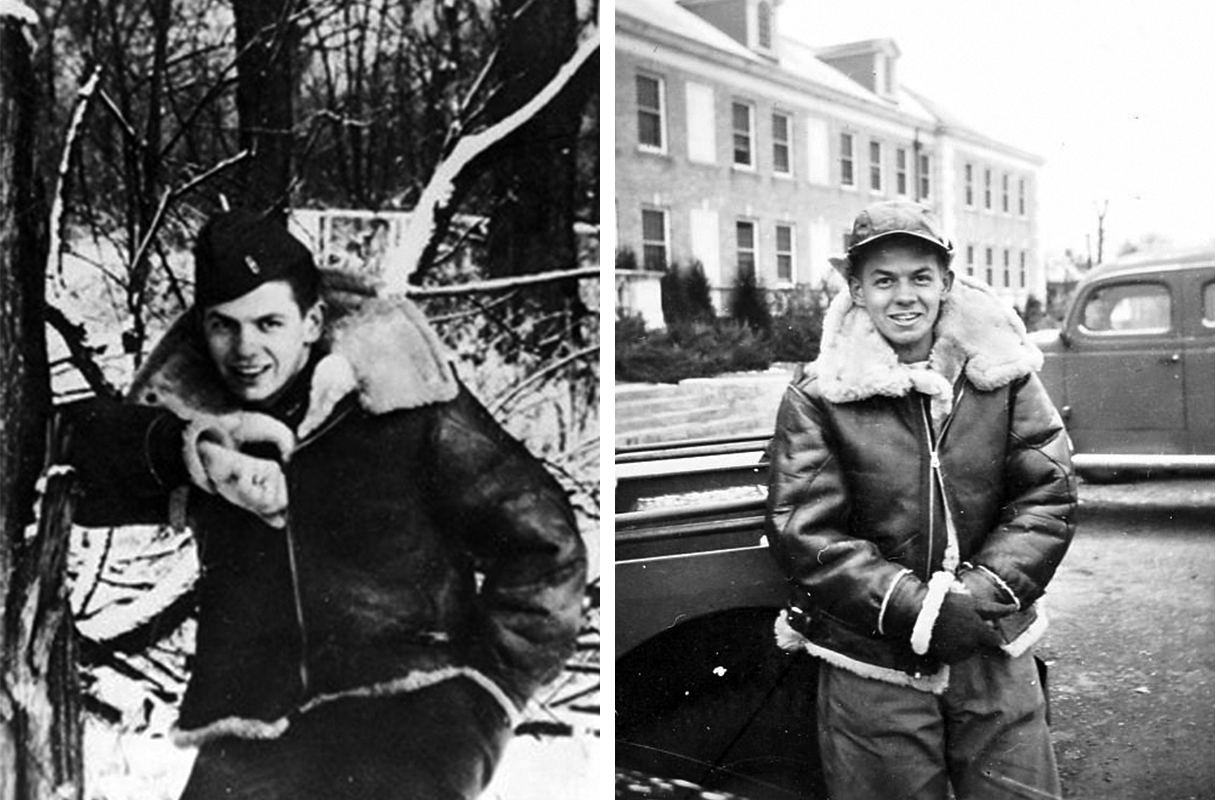 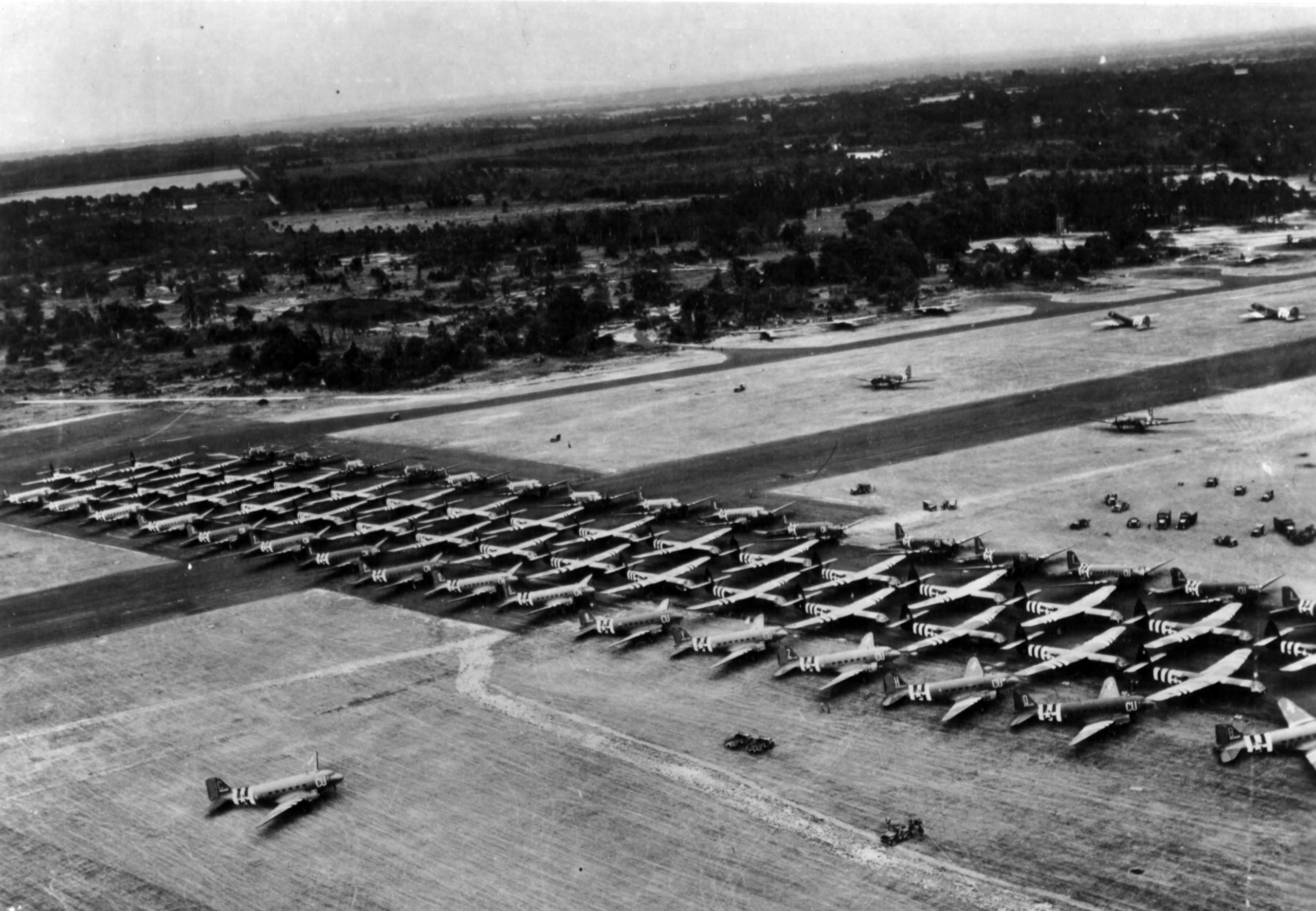 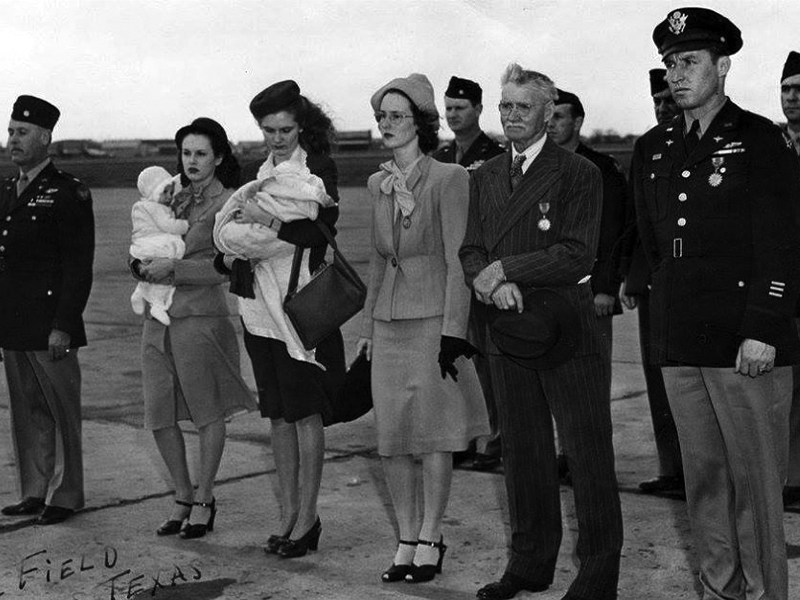 Widows and parents of Glider Pilots who had been killed in the ETO receiving their remains at Love Field, Texas, April 1945. The window of Jimmie Metchicas, Letha Mae Metchicas, standing fourth from left and has had Jimmy's Air Medal pinned to her jacket. (Thomas Dmitri Archive) 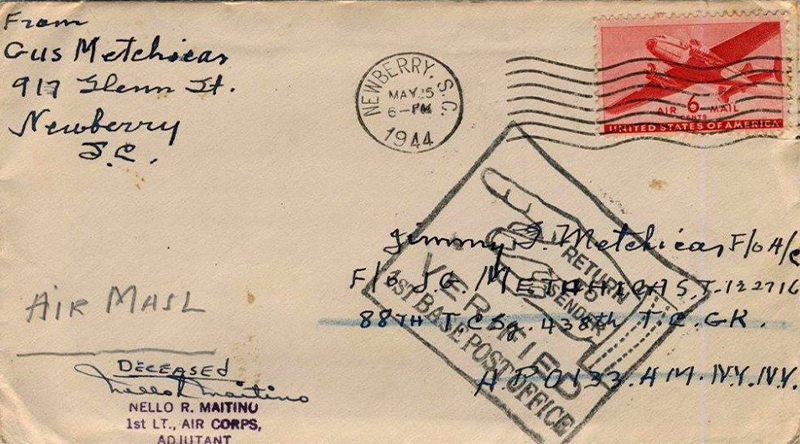 An unopened letter from his father, Gus Metchicas, returned to the sender after the death of F/O Jimmie Metchicas. The post stamp wrote “Newberry May 15, 1944”. The young pilot never received it because of his death. (Thomas Dmitri Archive) 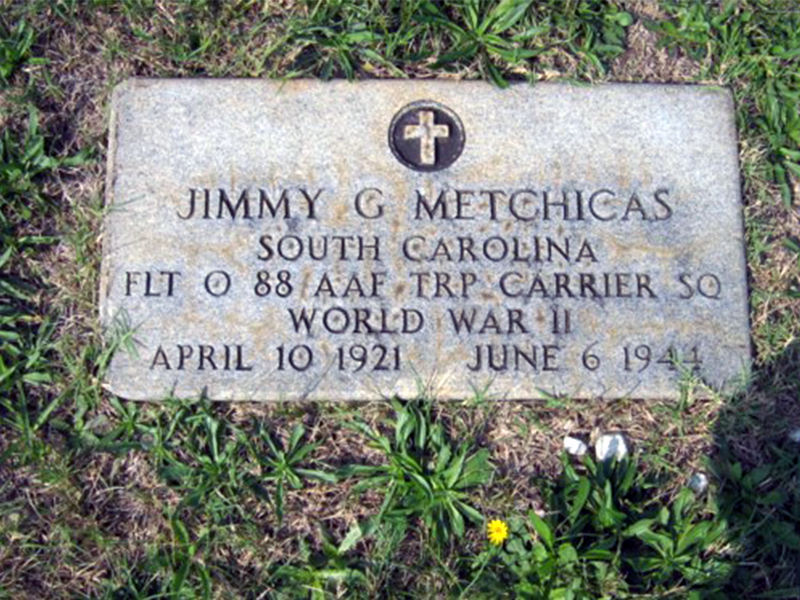 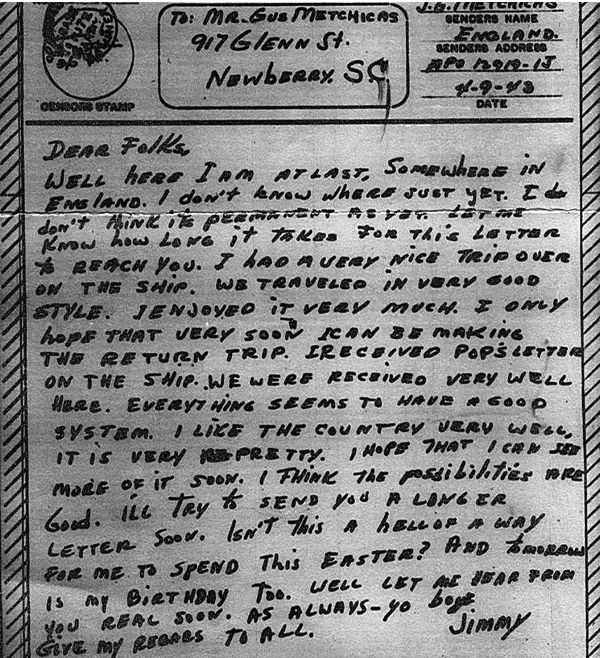 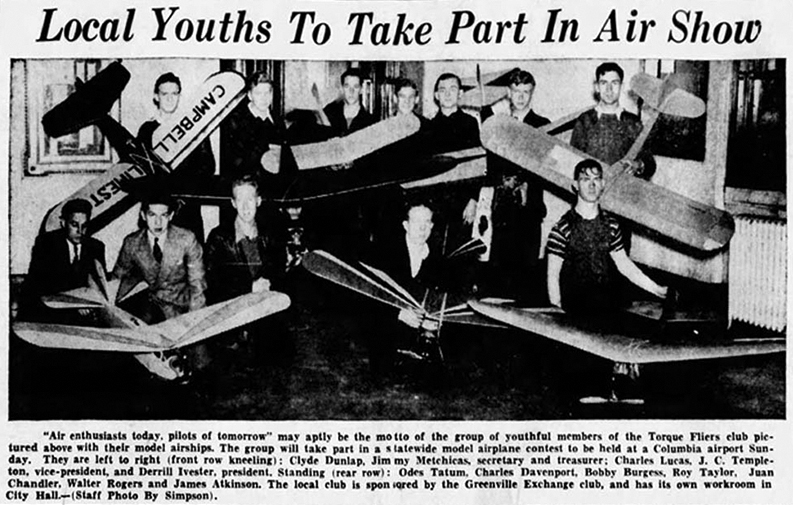 This photo was taken in Greenville's municipality airport in August 1938. It was the first contest with gasoline-powered model planes that organized in this airport and the young Jimmie Metchicas (kneeling second from left) took the second place. (The Greenville News)

Special thanks to Thomas Dimitri for his great contribution and help during my research!