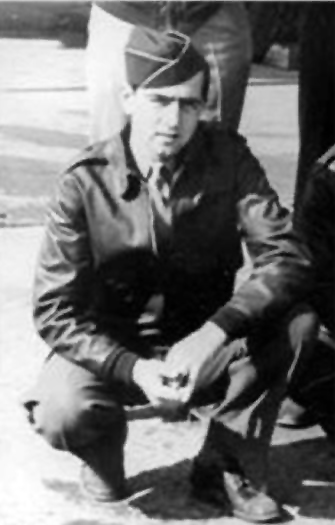 George W. Agiasottelis pose with the rest of the crew in front of an unknown B-17F, wearing his A-2 jacket. He flew 26 missions over Europe and was awarded Air Medal and Oak Leaf Clusters for his successful completion of each 5 of these. According to the citation: For exceptionally meritorious achievement, while participating in five separate bomber missions over enemy occupied continental Europe. The courage, coolness, and skill displayed by these Officers and Enlisted Men upon these occasions reflect great credit upon themselves and the Armed Forces of the United States. (https://390th.org) 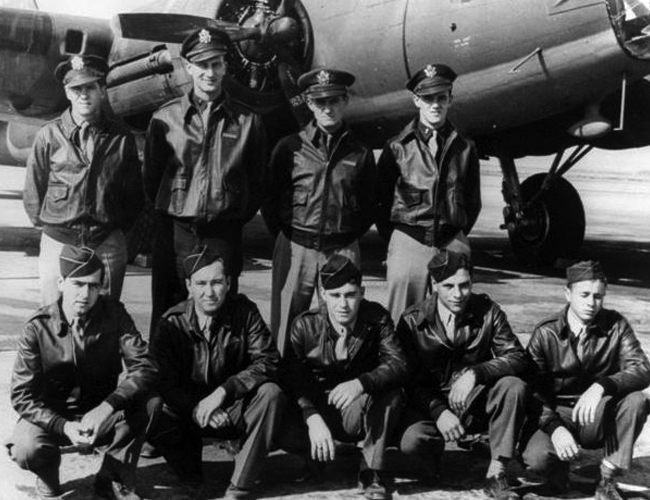 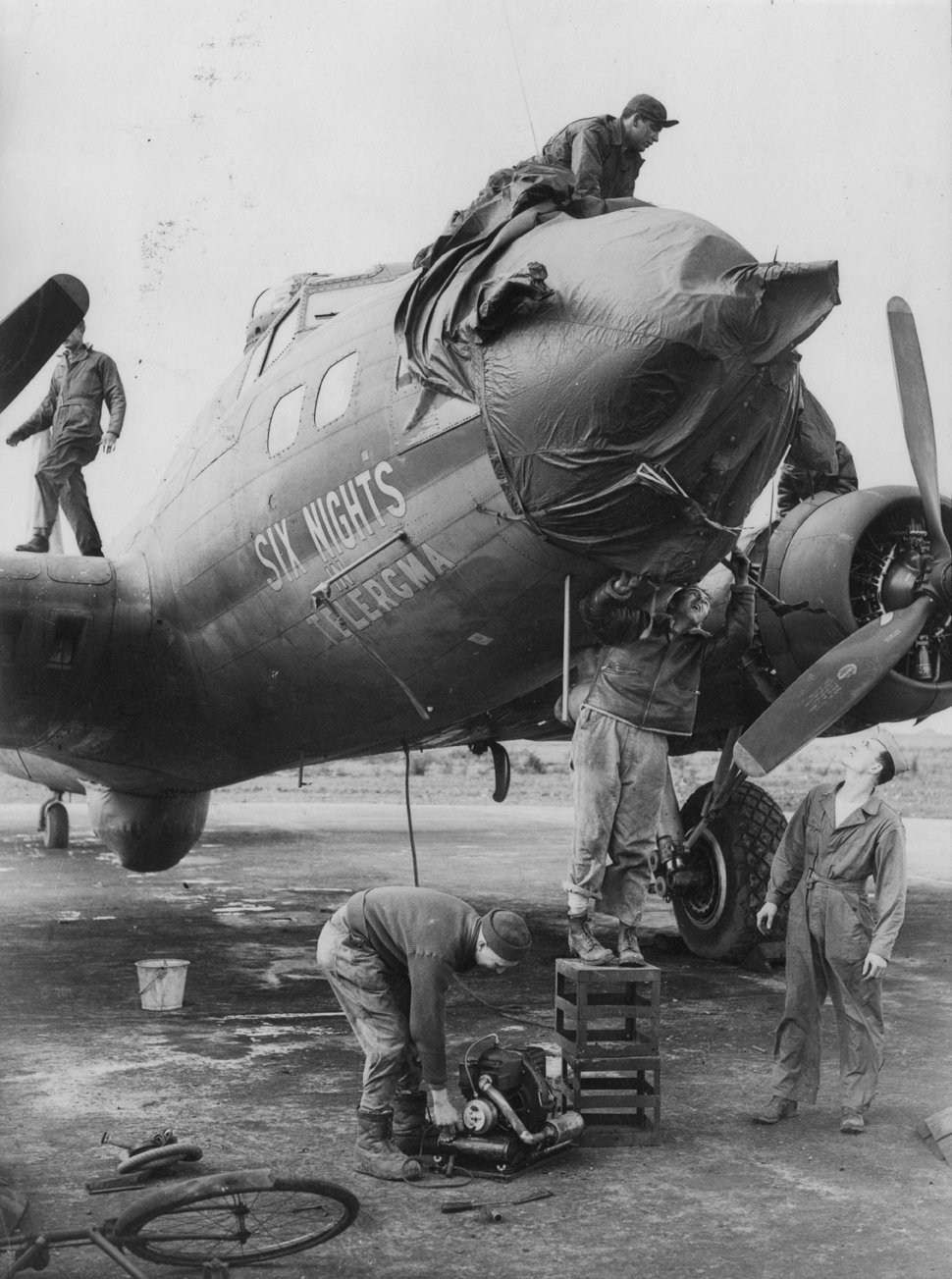 Ground crew prepares it for another mission against German targets. Worth to notice is the tarpaulin cover on the glass nose as well as in the ball turret. (Roger Freeman Collection FRE 1604 via http://www.americanairmuseum.com)

George W. Agiasottelis Jr. was born on January 31, 1921, in Cambridge, Massachusetts from a family of Greek immigrants. His father was named George Agiasottelis, Sr, and his mother Bessie Haralambus. He enlisted on June 5, 1942, in Boston Massachusetts and he qualified for Aerial Gunnery School in August 1942. He was later trained as a Ball Turret Gunner and he logged a total of 322 hours of training in aircraft machine guns, explosives and ammunition, bomb racks, and Sperry turret and sights. During his training, he convicted twice in the court-martial on two occasions for unauthorized leaving. He was later transferred to the 8th Air Force and attached to the 390th Bomb Group, joining the 568th Bomb Squadron being a member of Cpt. Wagoneer's crew. He flew his first mission on Dec.5, 1943 flying a mission over France. One of his most memorable missions was his 7th when the Group targeted Heuringhem France. He was flying with the rest of the crew, their regular B-17F, #42-3427, BI-B, Six Nights in Telergma(Arabian Nuts). During that sortie, the bomber was hit and the pilot gave the signal to bail out, while he chooses to stay and fight with the fire which engulfed his right wing on fire. Along with him some of the crew decided to stay with him and some bailed out. Agiasottelis stayed in the damaged bomber and according to Wagoneer, acted as a Co-Pilot, helping him to put out the fire, by making a split-S maneuver! They succeed and returned to their base to fight another day.

According to the S-2 mission report:

"On order of pilot, 6 men bailed out of A/C #427 which had been hit by flak, setting #1 engine, and wing afire. This occurred about 10 miles due South of Boulogne. Chutes observed drifting inland. A/C #427 then returned safely to base."

"On second target run, hit by flak. the No.1 engine lost – caught fire – whole wing started blazing – ship rolled over to the left – nose dropped straight down – flipped on AFCE but it didn’t work – Crew ordered to bail out due to fire and ship out of control. – NTG called the pilot and finding him still there decided to stick it out. – RWG and TG also stayed. The pilot did split ‘S’ – lost 10.000 ft altitude – fire went out in dive – bombs dropped when the ship was under control and returned to base. TG handled radio, BTG acted as co-pilot and bombardier used VHDF for heading to field. No further observations."

After the mission above, George W. Agiasottelis continued his fight against the Nazis, attaching to Cpt. Hoover crew, flying mostly the B-17G, #42-31339, BI-M, 'Schifless - Skonk.' He flew 19 more missions and he was awarded the Distinguished Flying Cross (DFC) for his actions.

"For extraordinary achievement while serving as Ball Turret Gunner on B-17 airplane on many heavy bombardment missions over enemy occupied Continental Europe. Displaying great courage and skill, Sergeant Agiasottelis, fighting from his gun position, has warded off many enemy attacks and has materially aided in the success of each of these missions. The courage, coolness, and skill, displayed by Sergeant Agiasottelis on all these occasions reflect the highest credit upon himself and the Armed Forces of the United States."

Probably his most memorable mission was the one over Berlin on March 6, 1944. According to the 390th BG report:

"Leading the wing, the group finally fought its first battle of Berlin today. They achieved good bombing results, 18 enemy aircraft destroyed, 3 damaged to our loss of one B-17 and crew and one wounded. Fighters attacked viciously and in large numbers. Flak at the target was intense and accurate….although what would have been normally adequate fighter protection was provided, the enemy outnumbered them. Consequently, while some enemy fighters were engaging our escort, others were attacking the bomber formations. Over 200 attacks were pressed against the wing, of which at least 75 were directed against our Wing lead ship. The intensity of the attack by fighters and the anti-aircraft indicated by the fact that of the 24 ships which attacked and returned, 8 sustained major battle damage and eleven minor battle damage. The aircraft piloted by 1st Lt. R.Starks was missing. T.Sgt. Steve Kovacik was slightly wounded."

Agiasottelis recounted this mission during an interview he gave for Daily Press Sun, on May 28, 1944.

"German fighter pilots didn’t like the painting of Hitler’s head on a skunk’s body on the Flying Fortress ‘Shif’less Skonk’ but they couldn’t do much about it. St.Sgt George W. Agiasottelis, a turret gunner on the fortress said the Nazi fighters swarmed at them like hornets every time ‘Skonk’ raided German territory. It was a rocket shot from the ground that finally “nailed us hard” the sergeant said. We were headed for Berlin with bomb load, my 19th mission when a ground-fired rocket blew one engine out of the plane. Still, we knocked down eight German planes. And we unloaded on Berlin before we finally headed home.”

Although the #339 crew shot down 8 Luftwaffe fighters, George claimed none. Nevertheless, Agiasottelis did something equally crucial for the safety of his bomber by dislodging three bombs which were stuck within the bomb bay. For his actions that day he was awarded an Oak Leaf Cluster to his previous DFC. According to the citation:

"For heroism in aerial flight while serving as a Ball Turret Gunner of a B-17 aircraft on a bombing mission over Berlin, Germany, 6 March 1944. Enroute to the target, the bomber was badly damaged by vicious attacks of enemy fighters. Enemy cannon fire exploded in the aircraft severely damaging the cockpit and bomb bay. Despite the badly leaking fuel tanks and the consequent danger of explosion, Sgt. Agiasottelis remained at his post for more than two hours. His expert gunmanship drove off repeated attacks by enemy fighters. When 500 pounds bombs faulted in bomb racks, Sgt. Agiasottelis despite extreme cold and lack of oxygen at a high altitude, and without a parachute, stepped onto the bomb bay catwalk and with great effort succeeded in dislodging the three bombs which were disposed in the target area. The heroism, courage, skill, and devotion to duty displayed by Sgt. Agiasottelis on this occasion reflect the highest credit upon himself and the Armed Forces of the United States."

The Greek parentage gunner finished his tour of duty, with a record of 26 missions over Europe, including six to Berlin, flying with other bombers too (see Table below). It is known that he was married to Helen Agiasottelis but we don't know if they had children. He also had a brother named Christos Agiasottelis who also served in the US Army. Unfortunately, after the war George convicted of participating in the armed robbery of Quincy Trust Co. in Quincy, MA, sentenced to serve 13-15 years in state prison, and he released on parole in June 1961. His troubles continued as postal inspectors wanted him to implicate three men being investigated in connection with the 1.5$ million Plymouth mall truck hold up on Aug. 14, 1962, by giving him a reward of 200.000$. They also threaten him that if he did not co-operate they would find a way to break his parole and send him back to prison. It is not known if he passes away or he is still alive. 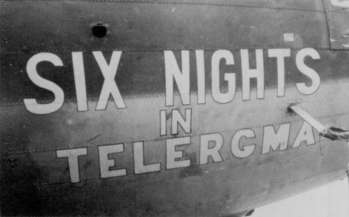 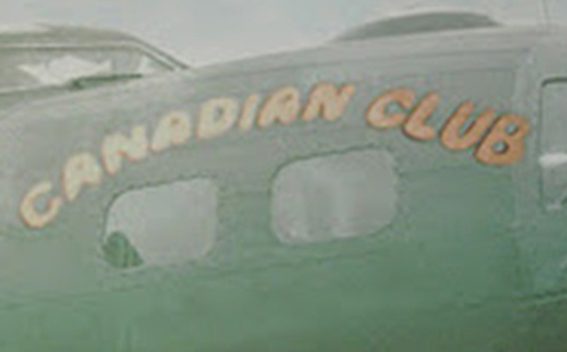 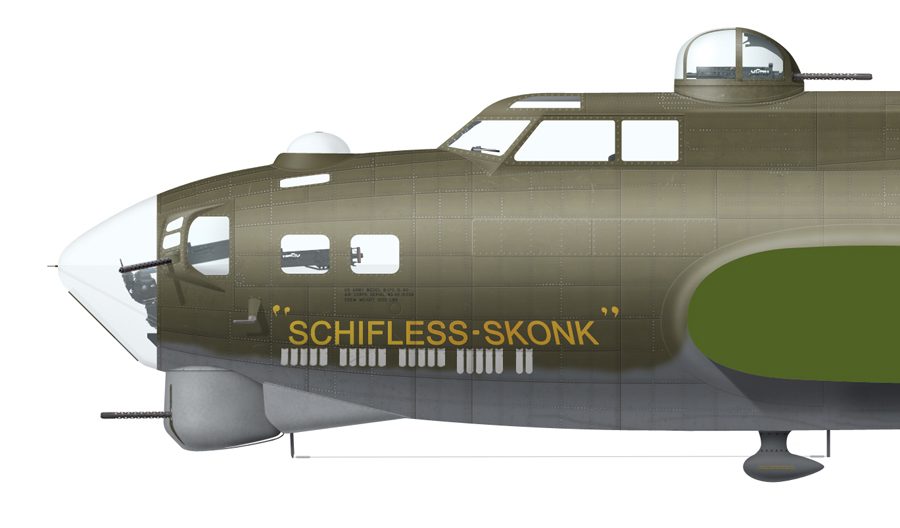 B-17G-15-BO, #42-31339, 'SCHIFLESS-SKONK' was the bomber flew by George Agiasottelis during one of his most memorable missions. Although the nose art in the Flying Fortress right side is confirmed by an official photo (check below) it is believed that it also carried one more nose art on its left side showing Hitler’s head on a skunk’s body. This nose art is confirmed by an interview given by Agiasottelis in Tampa Bay Times Sun newspaper on July 30, 1944, as well as the fact that it was also drawn on crews jackets (check photo below). From 390th Memorial Museum: Accepted by USAAF 19 Oct 43. Cheyenne Mod Center 22 Oct 43. Grand Isle 28 Oct 43. 8th AF 9 Nov 43. Severe battle damage 6 Mar 44 (Cat-E). Salvaged 22 Mar 44. (Copyright Gaetan Marie) 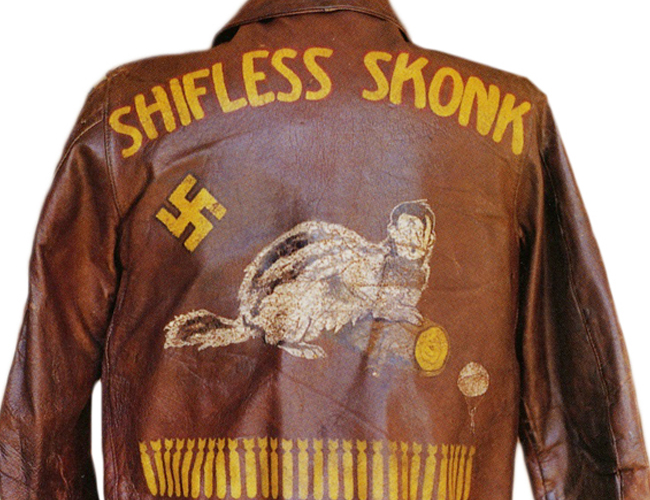 The artwork on this jacket depicts Hitler as a “SHIFLESS SKONK.” The “SCHIFLESS - SKONK,” misspelled on R.L. Parker’s jacket, was the name of a B-17G bomber of the 568th Bomb Squadron he flew with, along with the Greek parentage gunner. The artwork confirms Agiasottelis interview as this was the artwork described as being drawn in the #42-31339. The swastika marks a German aircraft destroyed, while the parachuter indicates Parker had to jump. (Arthur Hayes’ collection) 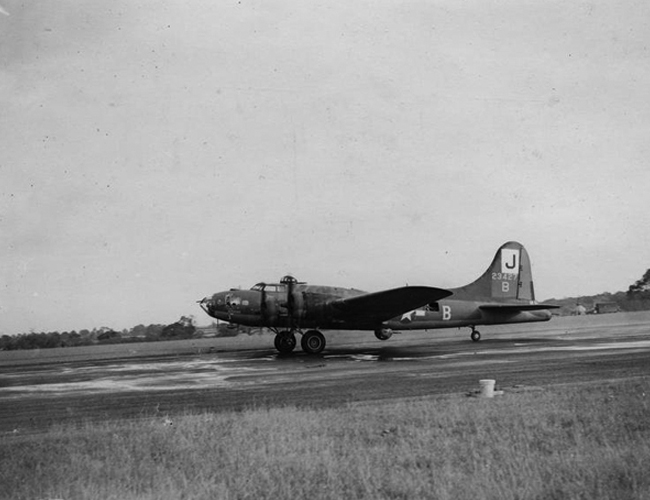 B-17 Flying Fortress, 'SIX NIGHTS IN TELERGMA (ARABIAN NUTS), # 42-3427, of the 390th Bomb Group prepares to take off at Framlingham. The caption behind the photo reads: 'The Fortress Keep Up The Attack. In spite of all weathers, the Flying Fortresses of the 8th A.F. Bomber Command, keep up with their attacks on important targets over Germany and other enemy-occupied countries. These pictures were taken at an 8th A.F. Bomber Command station in England. The date of the photo is probably October 25, 1943. (Roger Freeman Collection FRE 8228 via http://www.americanairmuseum.com) 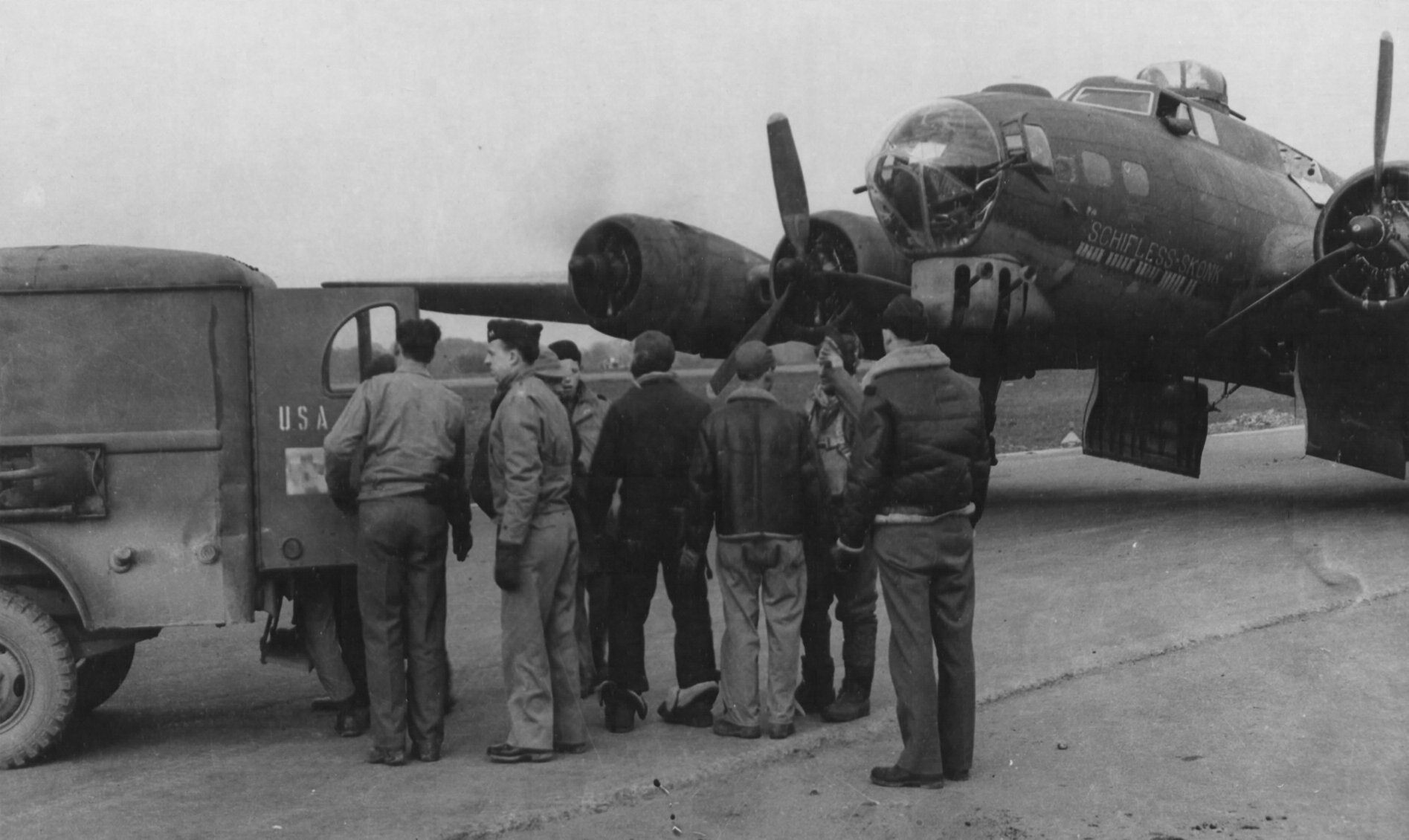 On March 6, 1944, Capt. Hoover, 'SCHIFTLESS-SKONK' led the 390th BG formation in a raid to Berlin. The formation attacked by Luftwaffe fighters 200 times, of which the 75 were on the lead ship, The crew repelled the attacks with success, achieving 8 confirmed kills, although Agiasottelis didnt claim any. After the #42-31339 returned to base it was full of holes from enemy fire and one of the crews, TSgt Kovacik was wounded. Although wounded in the leg, Kovacik continued firing and shot down two of the BF-109s. A fire erupted in the ammo storage and Kovacik tore the blazing machine gun links apart and disposed of them, putting out the fire. He then went to assist the bombardier with kicking out three fused bombs that had jammed in the bomb bay due to damage from the fighter attacks. For these actions, he was awarded the Army Distinguished Service Cross. In the photo above the whole crew (including Agiasottelis) waits for the ambulance to take Kovacik to the base hospital. Below are a series of photos showing the severe damage on the bomber, emphasizing to the top turret position held by Kovacik. (Photo Above USAAF via National Archives AA.71419AC and photos below by USAAF via AFHRA) 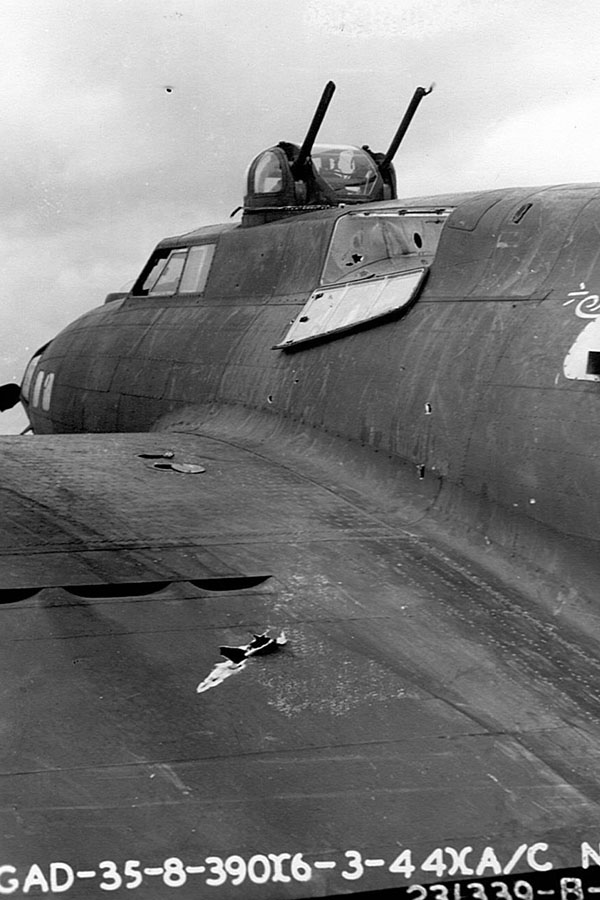 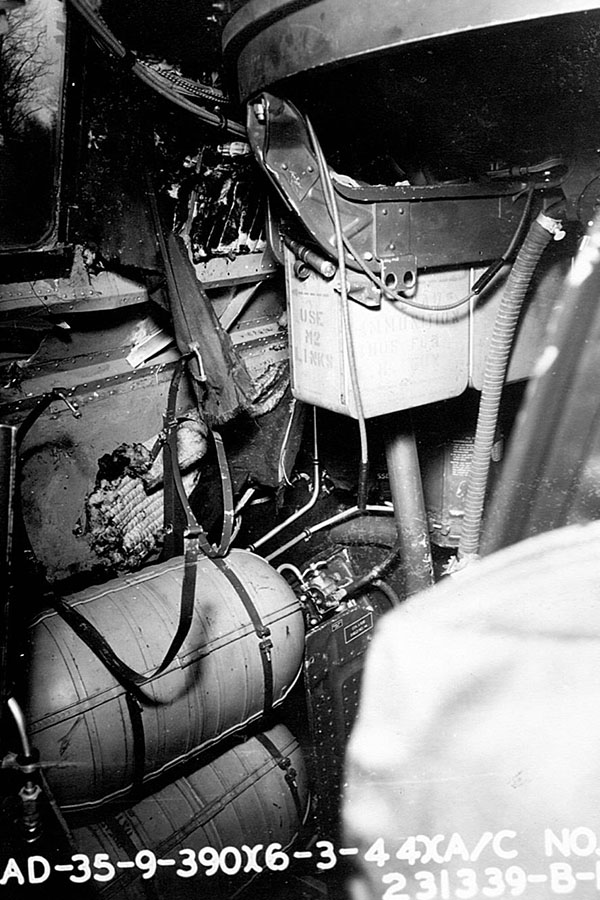 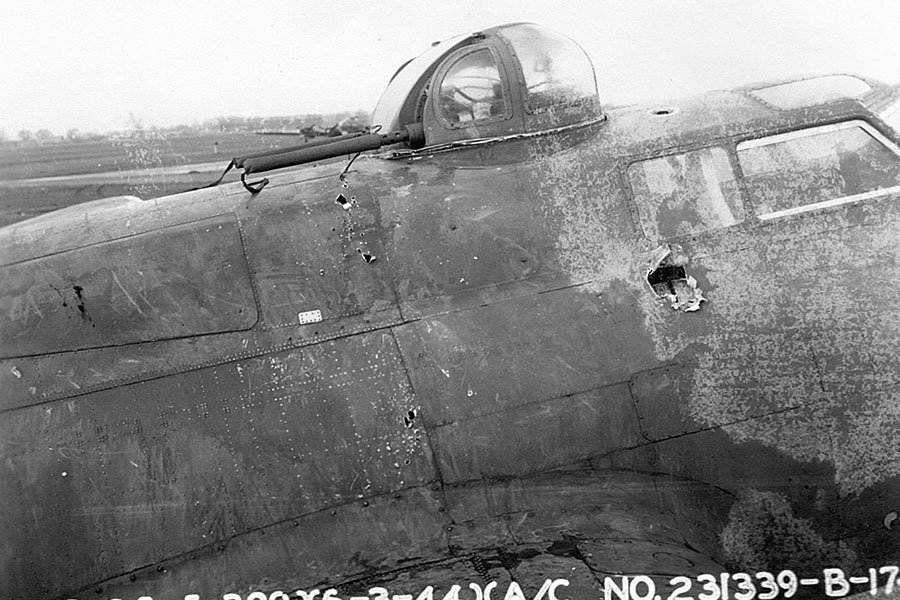 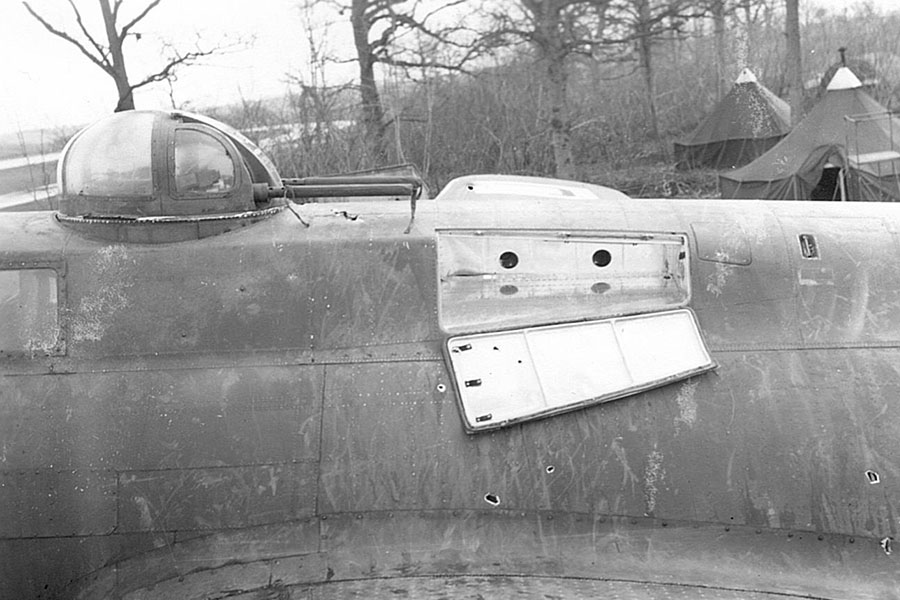